The State We're In 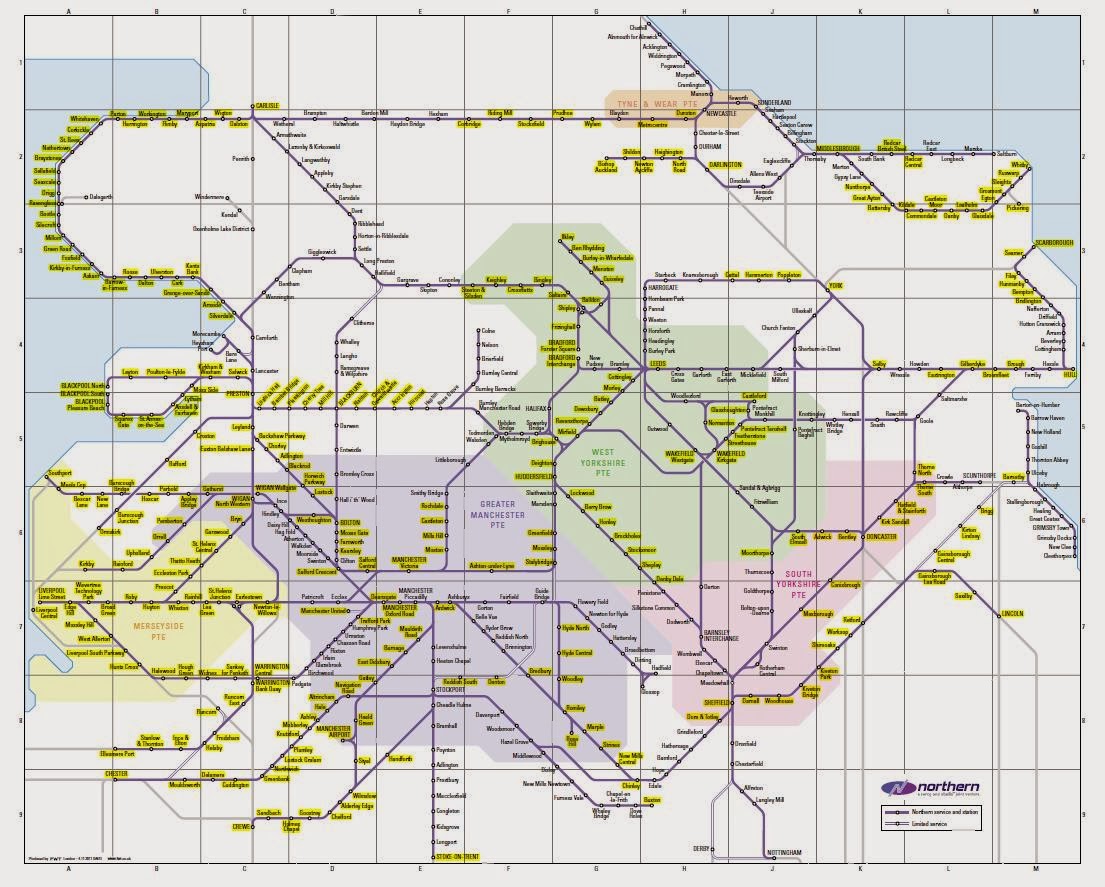 TOTAL NUMBER OF STATIONS THAT WERE ADDED TO THE MAP AND I COUNTED WITHOUT THINKING BECAUSE I COLLECTED THEM AGES AGO, ONLY TO HAVE THEM REALLY MUCK UP MY SPREADSHEET AND HAVE ME SCRATCHING MY HEAD WHEN I LOOKED AT MY FIGURES JUST NOW: 1 (Liverpool Central)

The map above shows all the stations on the map, with those highlighted yellow already crossed off.  There's a big patch in the top left that's uncollected.  Staffordshire and Derbyshire still have some holes.  The North East is also very patchy, and the Grimsby line is completely untouched: partly the fault of a landslip blocking the line for ages, partly due to the fact it's miles away.

In terms of the Passenger Transport Executives (the coloured areas) - well, I've completed Merseytravel, obviously.  West Yorkshire is the most tarted of the other PTEs, with 64% of its stations under my belt; next is Greater Manchester with 56%, South Yorkshire with 52%, and Tyne & Wear with 33%.  That last one sounds impressive, but there are actually only 6 stations in the orange area.

Other essential stats, for those of you who like that sort of thing:

MOST POPULAR POST OF 2013: This rather sniffy one about Northern Rail's Movember, which makes me think I must turn up on some Google hit somewhere.

MOST POPULAR POST WHICH IS ACTUALLY ABOUT ME: The tally of all the stations I visited on the Cumbrian Coast Line, which makes me think you people only come here for the bullet points, and my carefully crafted prose is distinctly unimportant.

NUMBER OF DESPERATE REFERENCES TO RUSSELL TOVEY IN THE HOPE THAT HE GOOGLES HIMSELF AND REALISES WE ARE MADE FOR EACH OTHER: I'd rather not say.

BAFFLING GOOGLE SEARCH WHICH KEEPS RESULTING IN BLOG HITS: "Penelope Keith's tits".  While I am a great admirer of the former Margot Leadbetter, I'm sorry, you're not going to get anything of that sort round here.

NUMBER OF CORPORATE FREEBIES AND/OR INVITES TO CHRISTMAS PARTIES I'VE RECEIVED FROM NORTHERN RAIL: None.  Not a sausage.  Not so much as a single purple flip flop.  Obviously I'm not in it for the gifts, but come on guys, how about chucking a Northern Rail biro my way or something?  Look at all the free publicity I give you!  I'm almost always nice.

SUGGESTIONS RECEIVED FOR WHERE I SHOULD VISIT NEXT: Antwerp station, Ireland, Wales, every station in the United Kingdom.

NUMBER OF PEOPLE WHO'VE OFFERED TO PAY ME TO VISIT THESE PLACES: Zero.

WORST STATION OF 2013: Pickering - not because it was particularly awful, but because it was on the map when it shouldn't have been there (it's a heritage station!) and so I object to it on principle.

Which seems like an appropriate place to stop.
Posted by Scott Willison at 19:40

Email ThisBlogThis!Share to TwitterShare to FacebookShare to Pinterest
Labels: Northern Rail, odds and sods, Russell Tovey, to do list

Congratulations on your progress! It's been great to read. I wish you a tart-tastic 2014.

Yay, well done Scott!! Really enjoyed your blog, your writing is excellent, you should in fact be published :)

Stations you should visit? Having been there the other day to get some shots of the nearby viaduct, Ribblehead (or Dent a close second), I presume your saving those for later though...

Look forward to reading more on your travels in 2014, and Best Wishes :)

Excellent. Just what your public have been demanding. Or a certain demographic of them, anyhow. Ta. Happy tarting in 2014!

Looking forward to how you finesse visiting Chathill!