There are rumours that Darnall railway station is marked for closure.  It's not hard to see why. 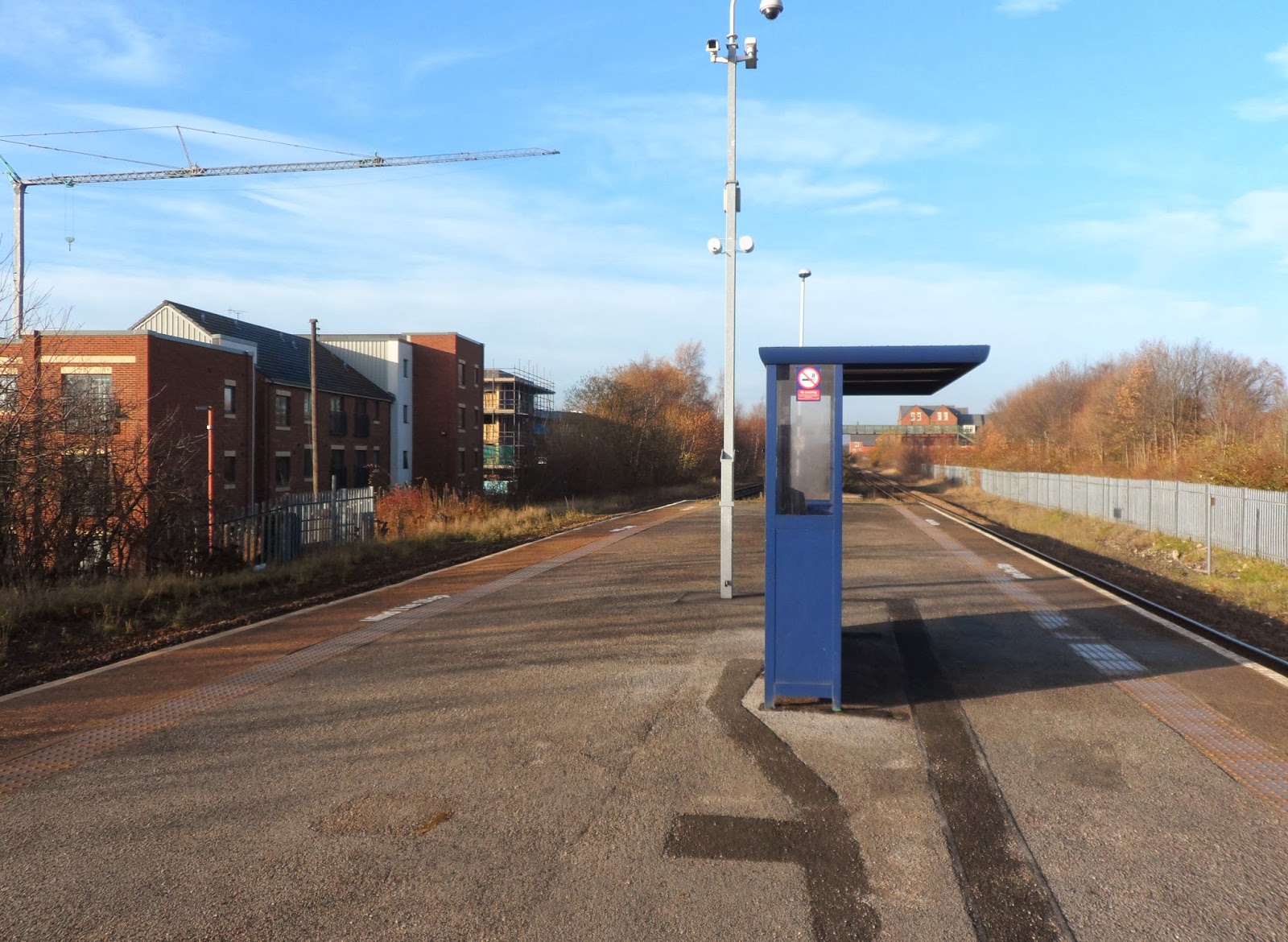 Darnall has a single, wide platform in the centre of two running lines.  There's no ticket office and there's no human presence.  Just a long strip of concrete and a lonely shelter. 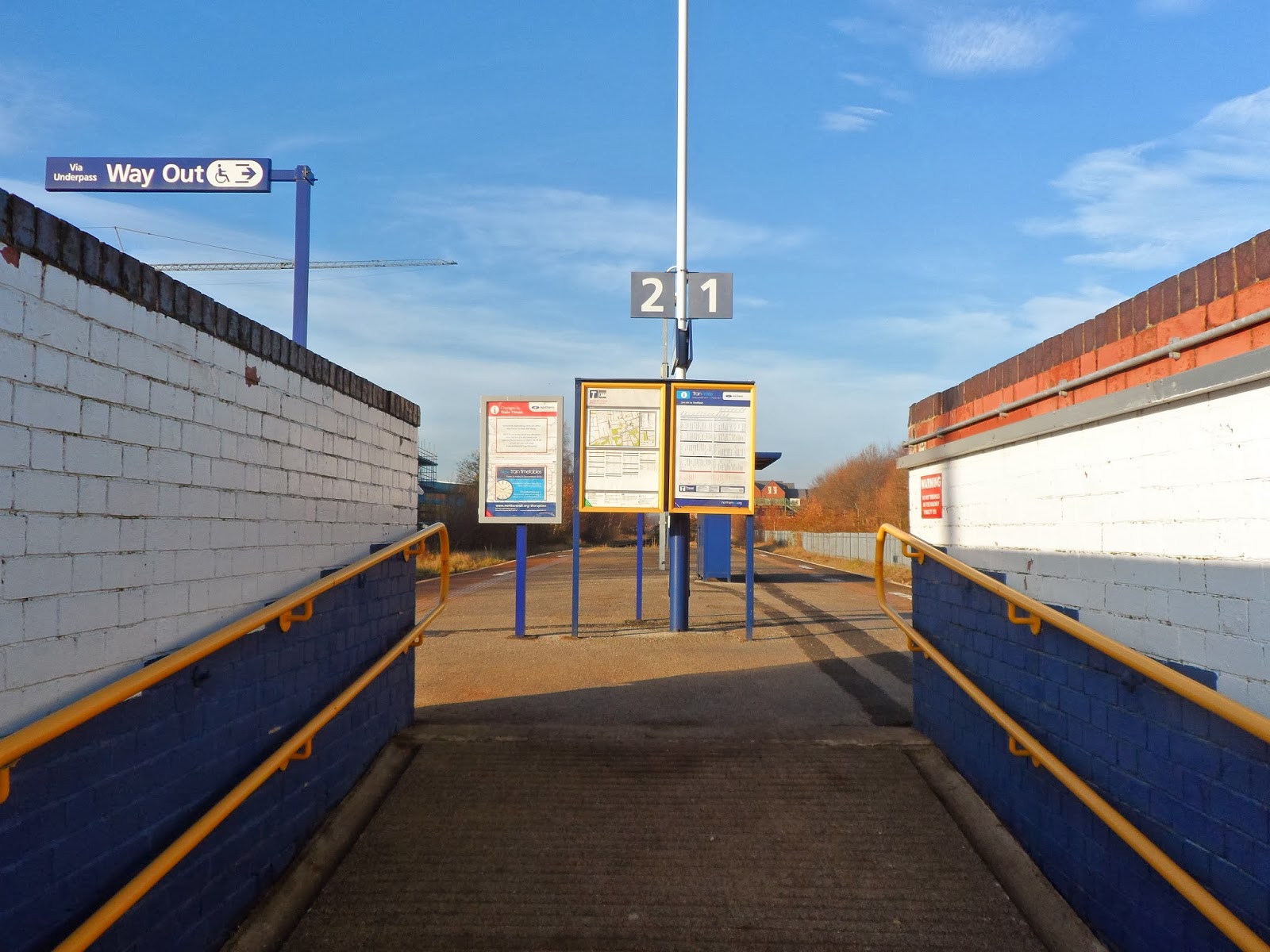 I was the only person to get off the train from Sheffield.  As it departed, I was left in a hollow centre.  Even though there were houses and flats all around me, they felt miles away, because the railway lines isolated me.  It was quite disconcerting.

Worse, the only way off the island platform is via a dark, unwelcoming subway.  Northern Rail have managed to save themselves a few quid by not turning on the lights during daylight hours.  On paper, this makes perfect sense; it's only four or five metres long, it's not a high traffic area, there's wide entrances at either end that should let the daylight in. 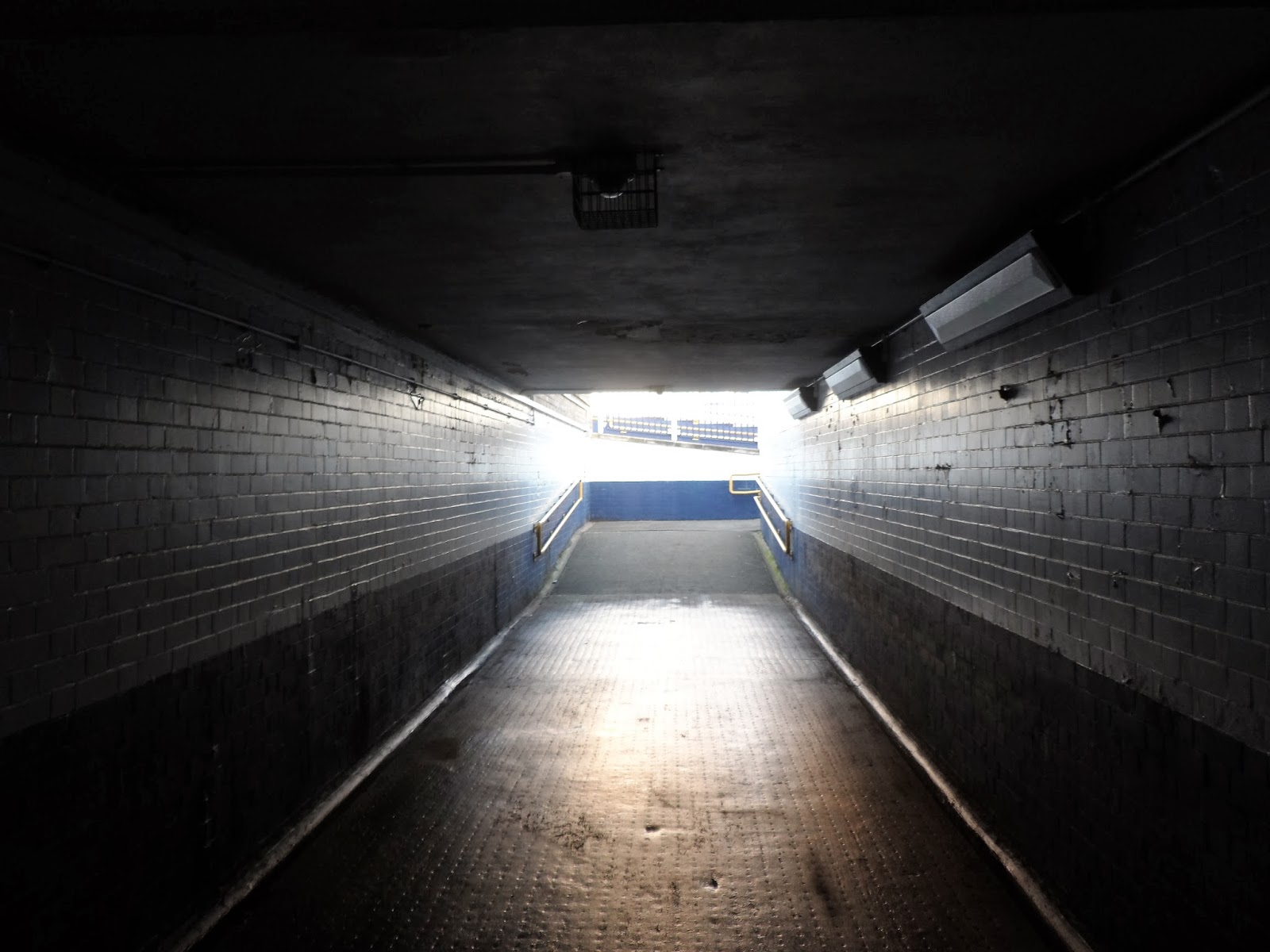 In reality you descend from the platform into a black hole, with a blind corner to negotiate.  I was intimidated, and I'm a reasonably healthy man; I wouldn't want to be a lonely woman, or a pensioner, and using that exit.  The CCTV cameras were no reassurance - they're only good after the fact, so the police can put the pictures of your murderer's face on Crimewatch.

I hurried up the exit ramp and into Station Road, a strip of red brick terraces, for the sign picture. 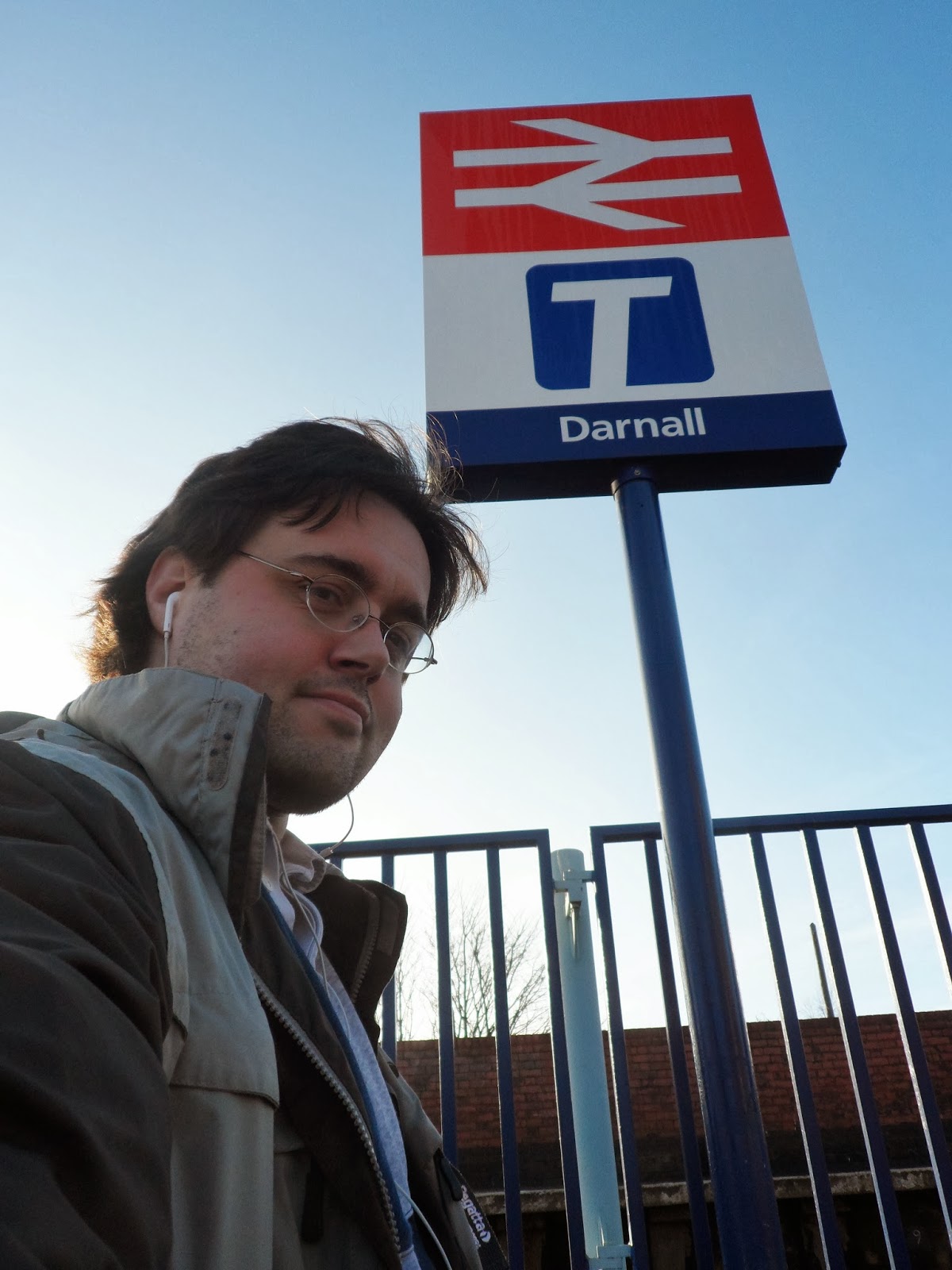 A quick right, a dart across the ring road, and I was on my way to the next station.  The road rose gradually as I moved out of the Sheaf valley.  At the end of the streets there were more parks - it really is a very pretty city at its best - but here, at the roadside, there was choked up traffic and litter.  A 4x4 swung onto the pavement ahead of me, narrowly avoiding running me over, apparently under the impression it was just a fancy form of off-road parking.  Further along, a man was unloading the boot of his car, balancing as many carrier bags as possible on his arms before he trekked up the high steps to his front door.  Those Yorkshire peaks might make the city look attractive but it means there's almost a vertical climb from the kerb to your kitchen. 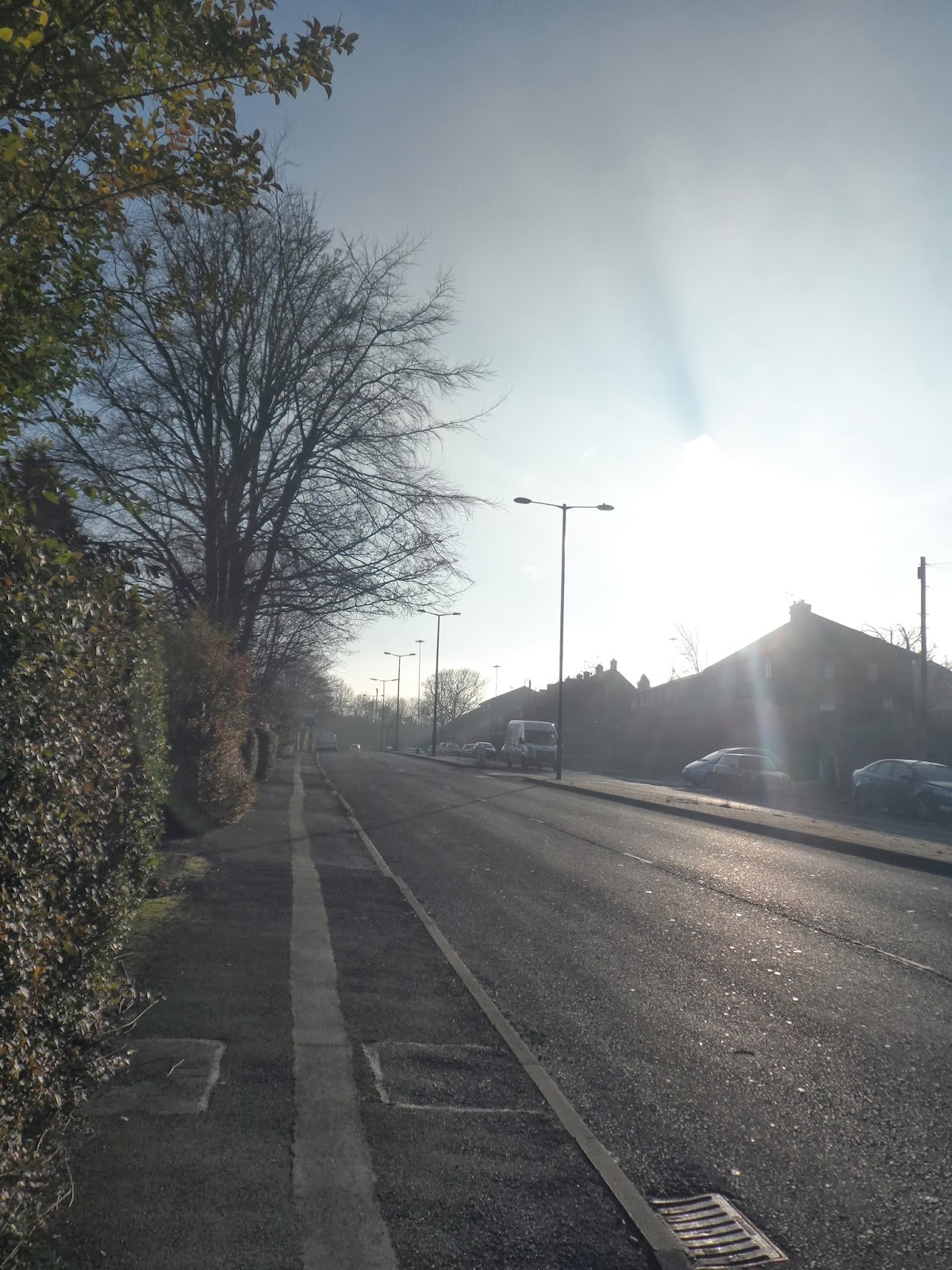 The sun sparkled in my eyes, as high as it was ever going to get at this time of year, warm but not hot.  It cast the right hand side of the road into moody silhouettes.

I passed garages and back gardens before reaching a flyover.  The Sheffield Parkway crashed past on its way to the M1 with an impressive junction; impressive for cars, that is, but not so good if you're a pedestrian trying to cross.  I darted across the entrance and exit ramps, convinced that I was about to be knocked down by a truck. 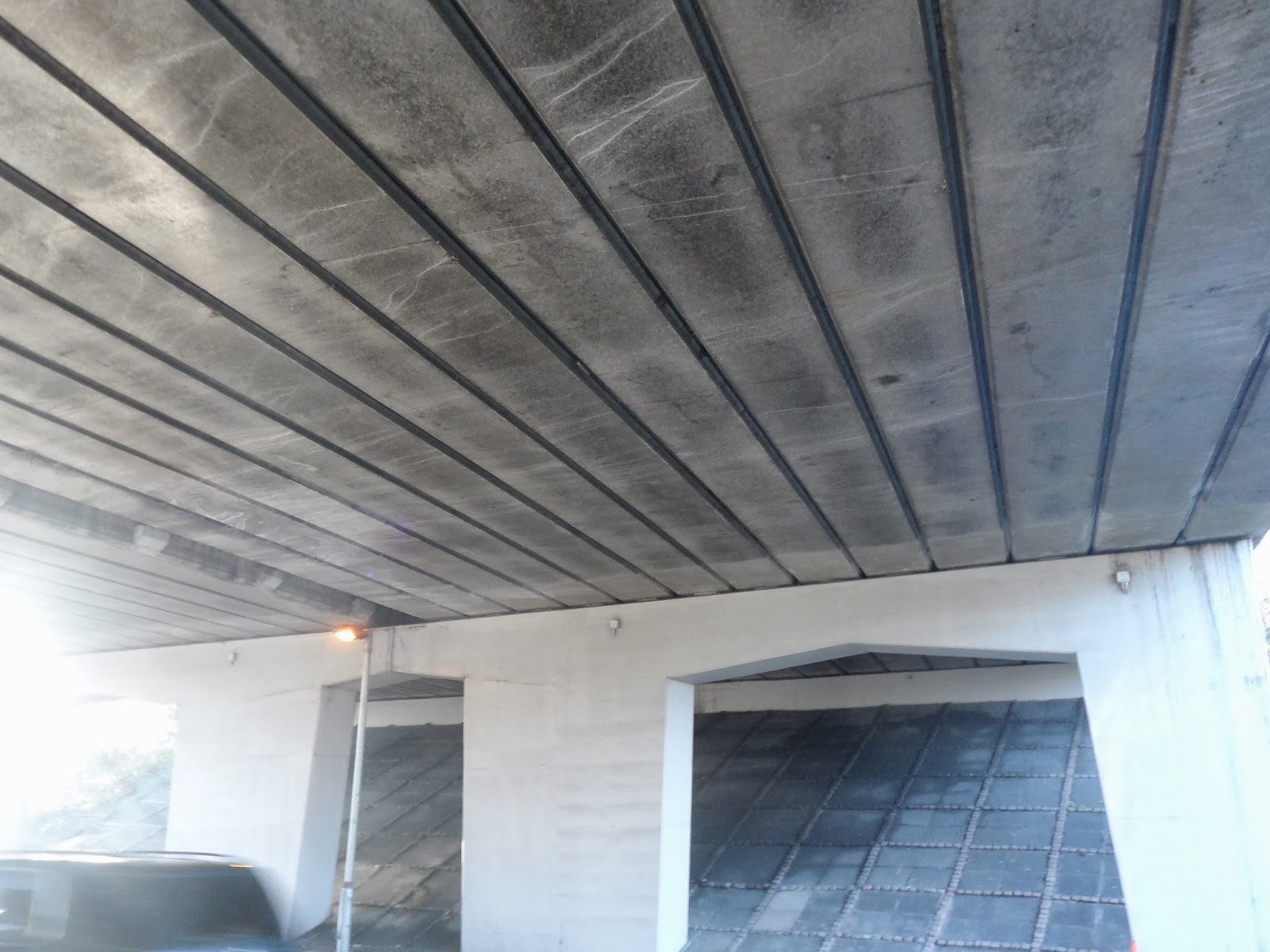 On the other side, a strip of undistinguished houses were punctuated by a blue plaque: In a cottage close to this site BENJAMIN HUNTSMAN invented Crucible Steel in 1742.  His invention helped make Sheffield rich, the home of steel and industry.  Beyond that, an Asda started off a strip of shops, car showrooms, a McDonalds.  There were flats and houses in amongst them: on a noticeboard, the South Yorkshire Police advised that community forums had been cancelled "due to low attendance".  A closed public toilet had a "for sale" sign on it, and I tried to imagine who on earth would buy it.  "I've got the most amazing bargain - it's eight square metres of urinals on a busy main road!  It could be our dream home!" 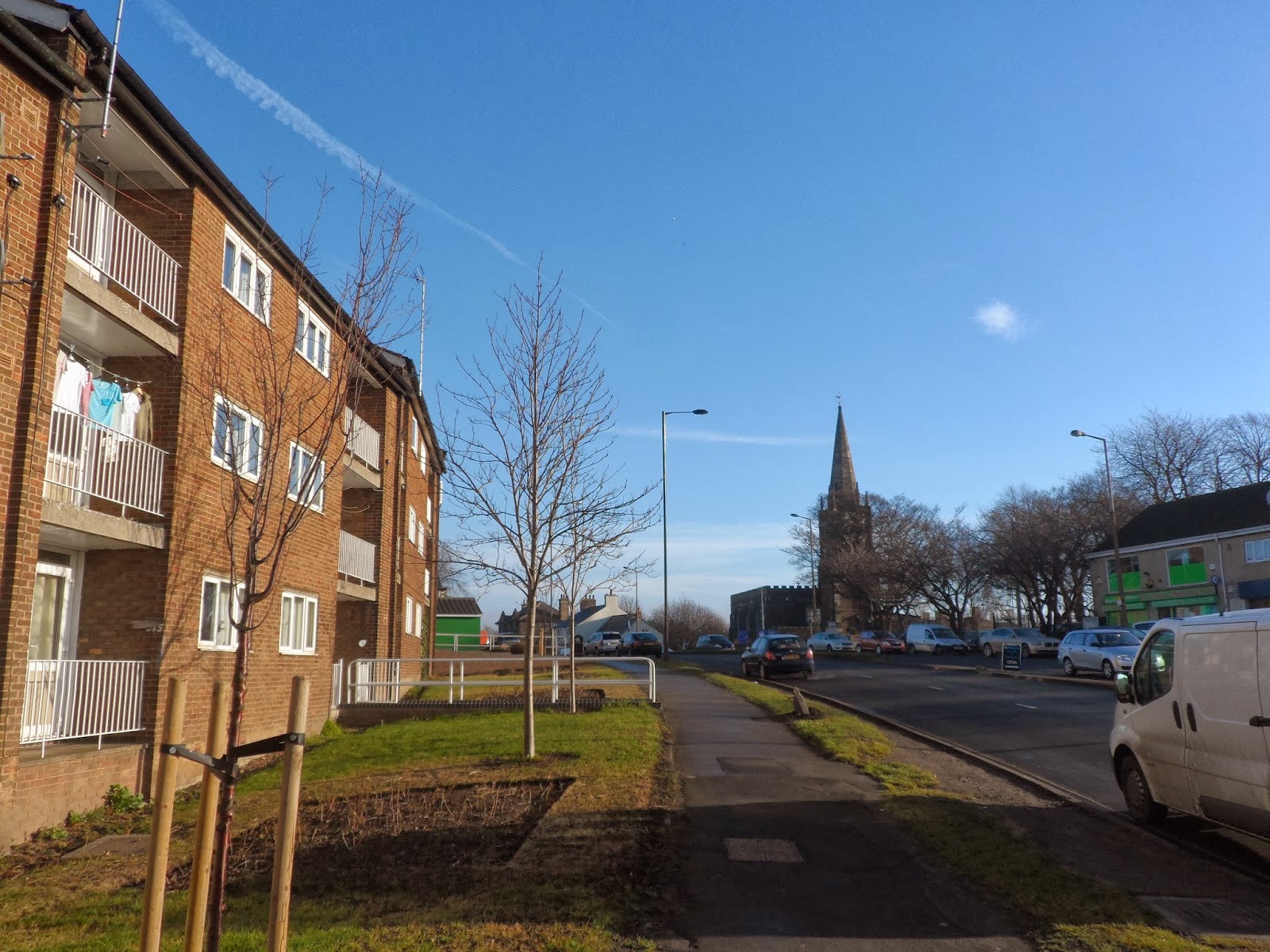 Still, there was a definite upward swing in the social class of the area, one that became even stronger as I crossed the lights by Kay's Kabin.  The houses were bigger and greener.  Some were raised up above the road on little terraces of their own; meanwhile, green pathways lead through to recreation areas and playgrounds. 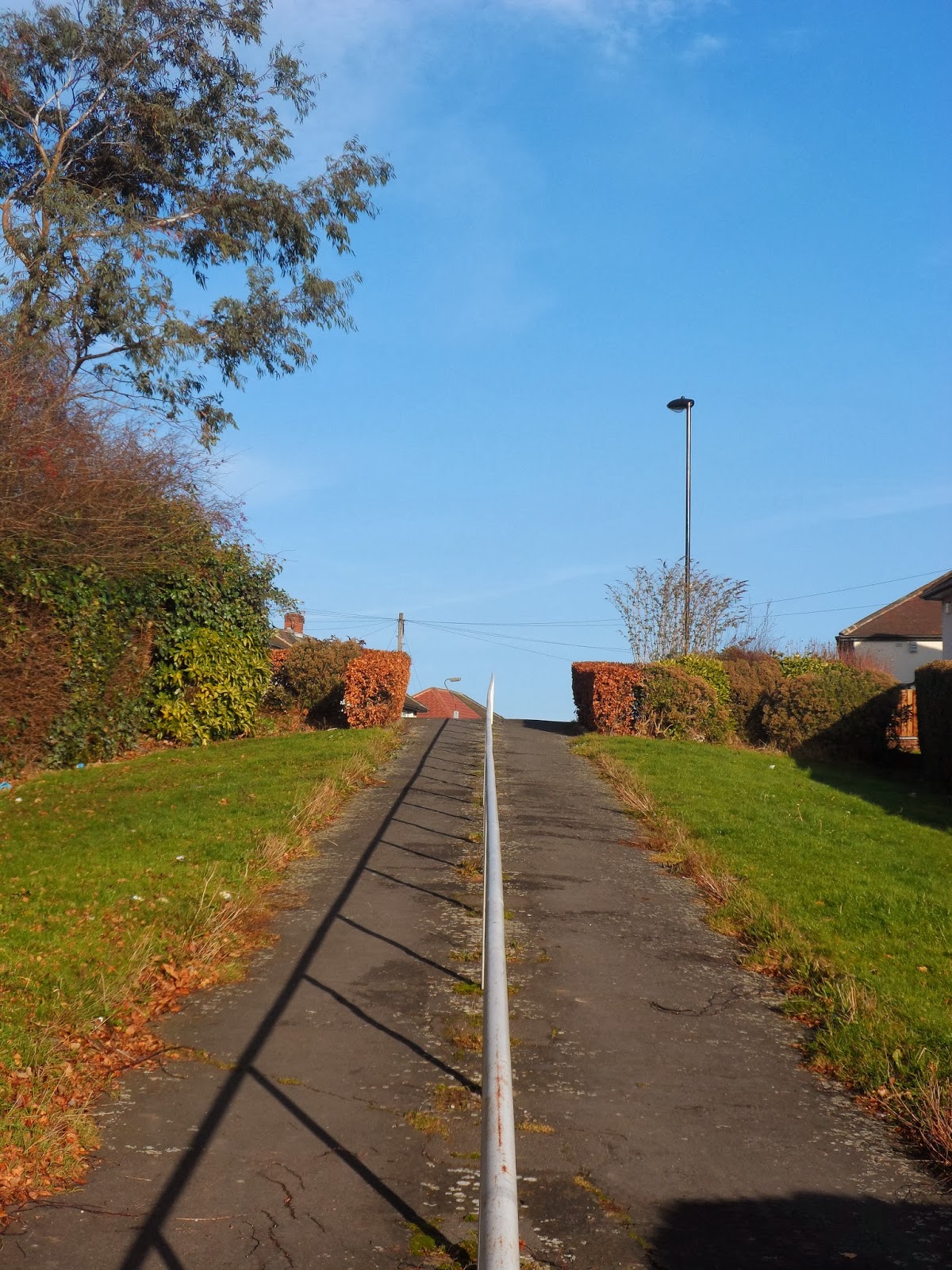 I turned away from the main road to head for Woodhouse.  It was originally a little farming and mining village, until redevelopment in the 1960s saw it turned into a new suburb for the city.  Now there were long streets of square houses, grass verges, and oblong schools advertising their Ofsted results.  Flockton Park advertised itself as the home of Woodhouse Juniors FC, Enjoying football since 1962.  The South Yorkshire fire service had their HQ here too, in a building that looked an awful lot like my old high school; giant tanks of flammable material for training purposes were temptingly close, making me wish I had a match so I could indulge my pyromaniac side.  I'm not a psychopath, honestly. 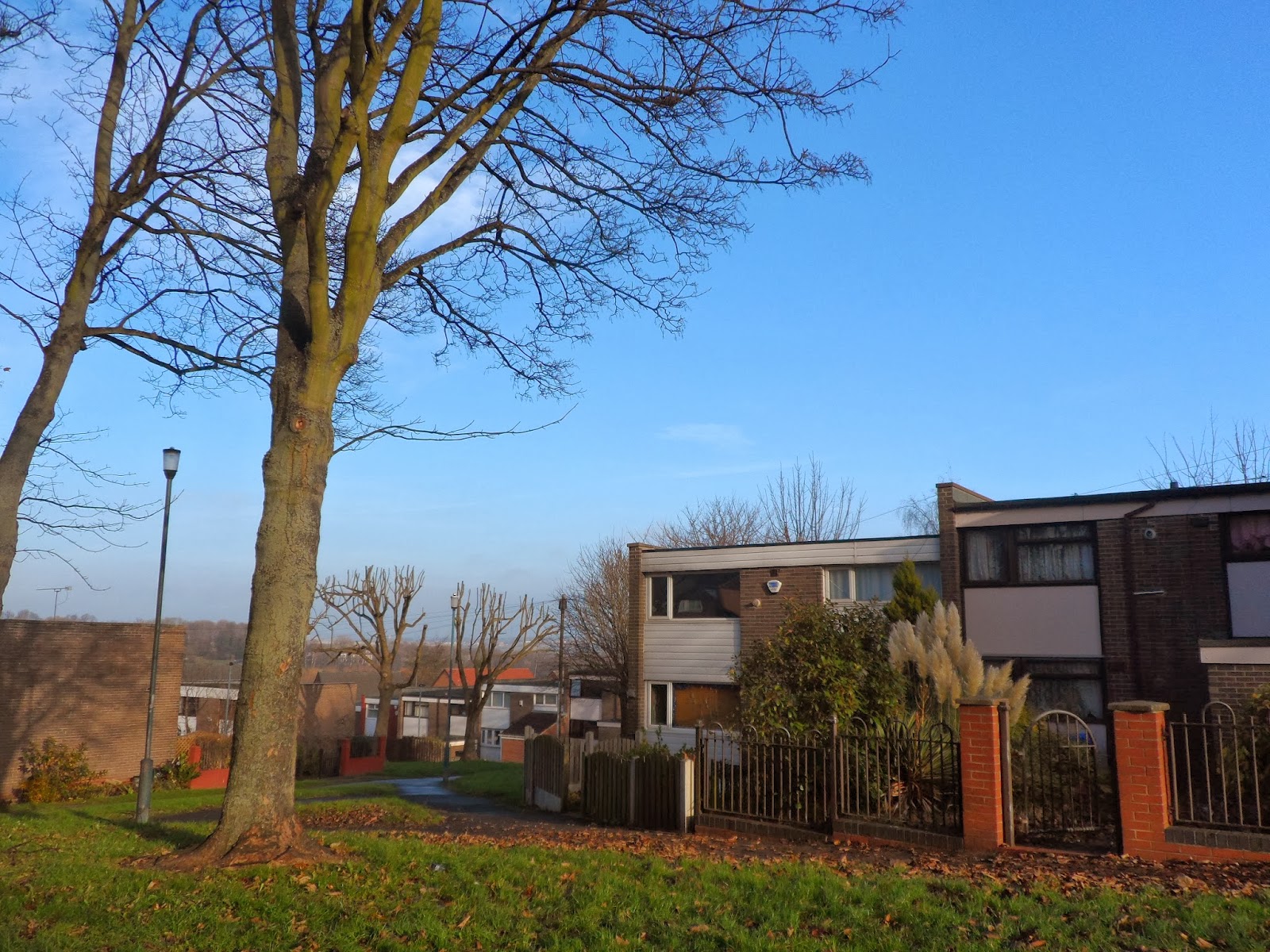 Woodhouse village itself had been ruthlessly stripped of any charm; Market Street ran behind maisonettes and past a parade of ugly shops.  The old village's market cross, weathered and green, looked out of place.  I headed for Station Road, where the nursery had just chucked out its "morning only" attendees; young mums stood around chatting while hyperactive toddlers bashed into one another.  The houses here were a little older, and round about the station they were properly Victorian.  The Junction pub stood beside it, closed and empty. 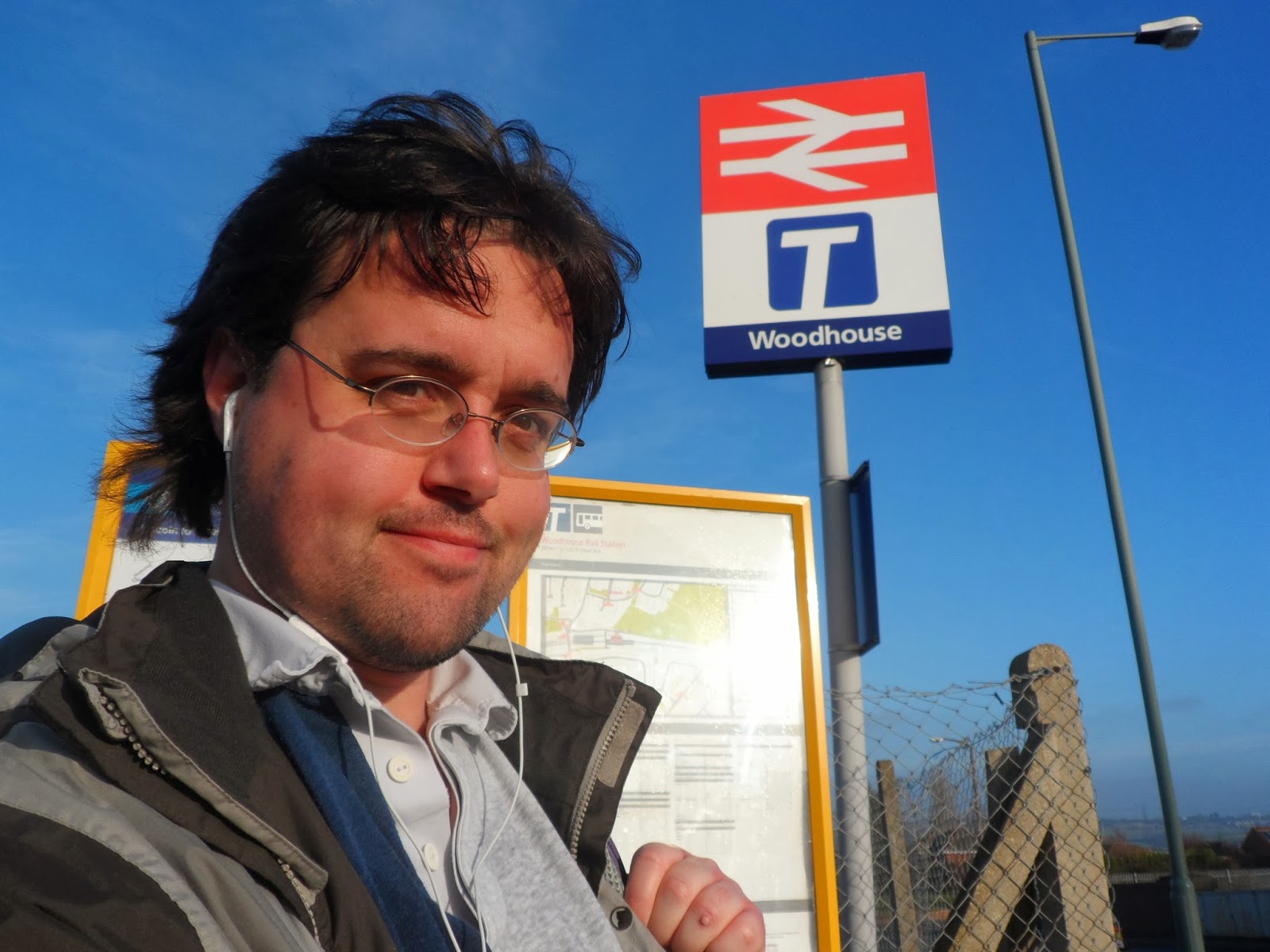 For some reason, even though there's a bridge right over the line, the actual station is a couple of hundred yards further down the track.  It means you have to get to the Lincoln-bound platforms via a path round the back of people's gardens, which feels wrong, like you're treading on their personal territory. 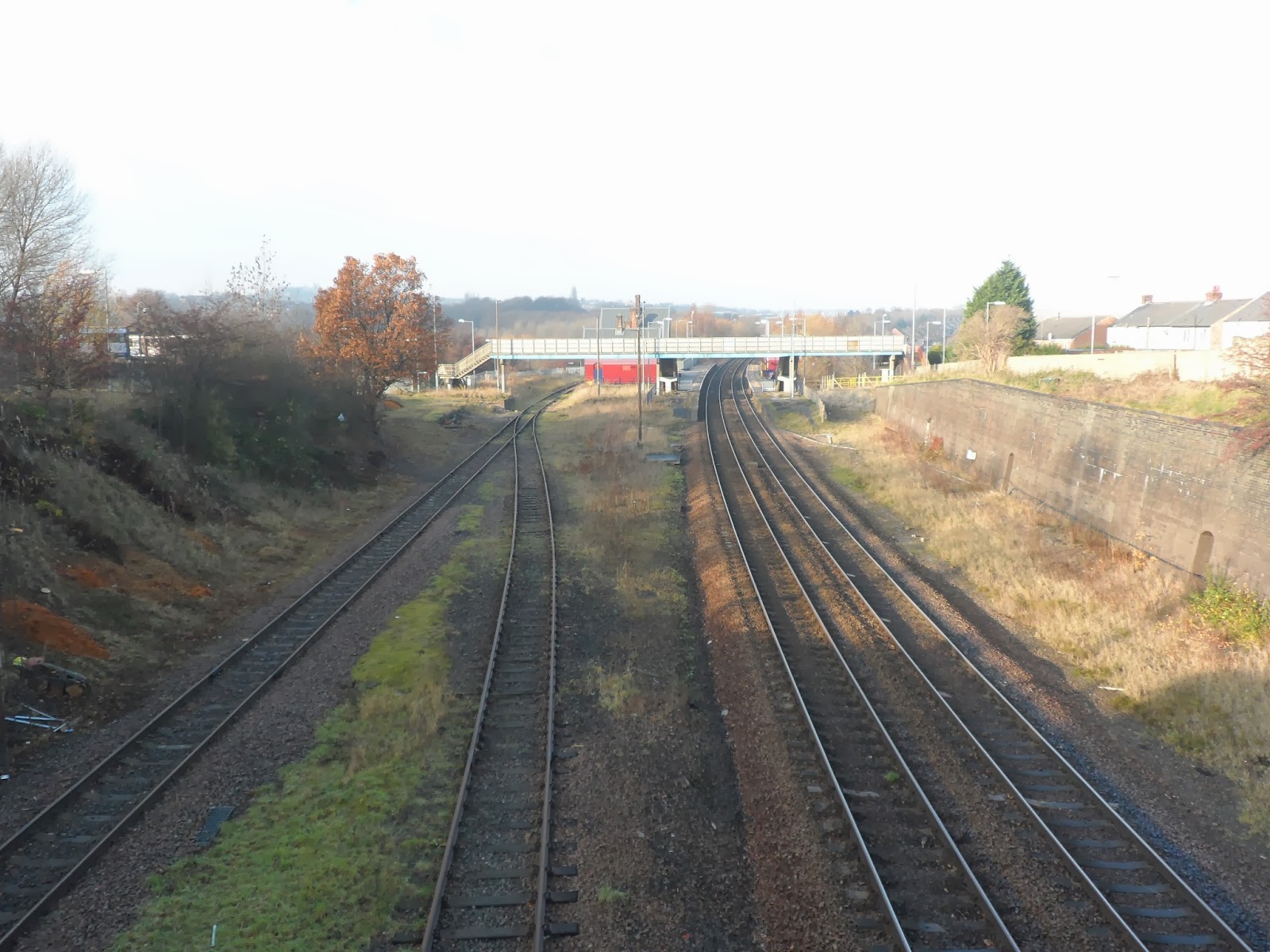 As far as I was concerned, the best thing about Woodhouse at that moment in time was its warm, enclosed waiting area.  Even though it seemed bright and the skies were blue, it was shockingly cold, a sneaky chill that you only notice once you stop moving.  I dashed inside the platform building and ate a sandwich with shuddering fingers. 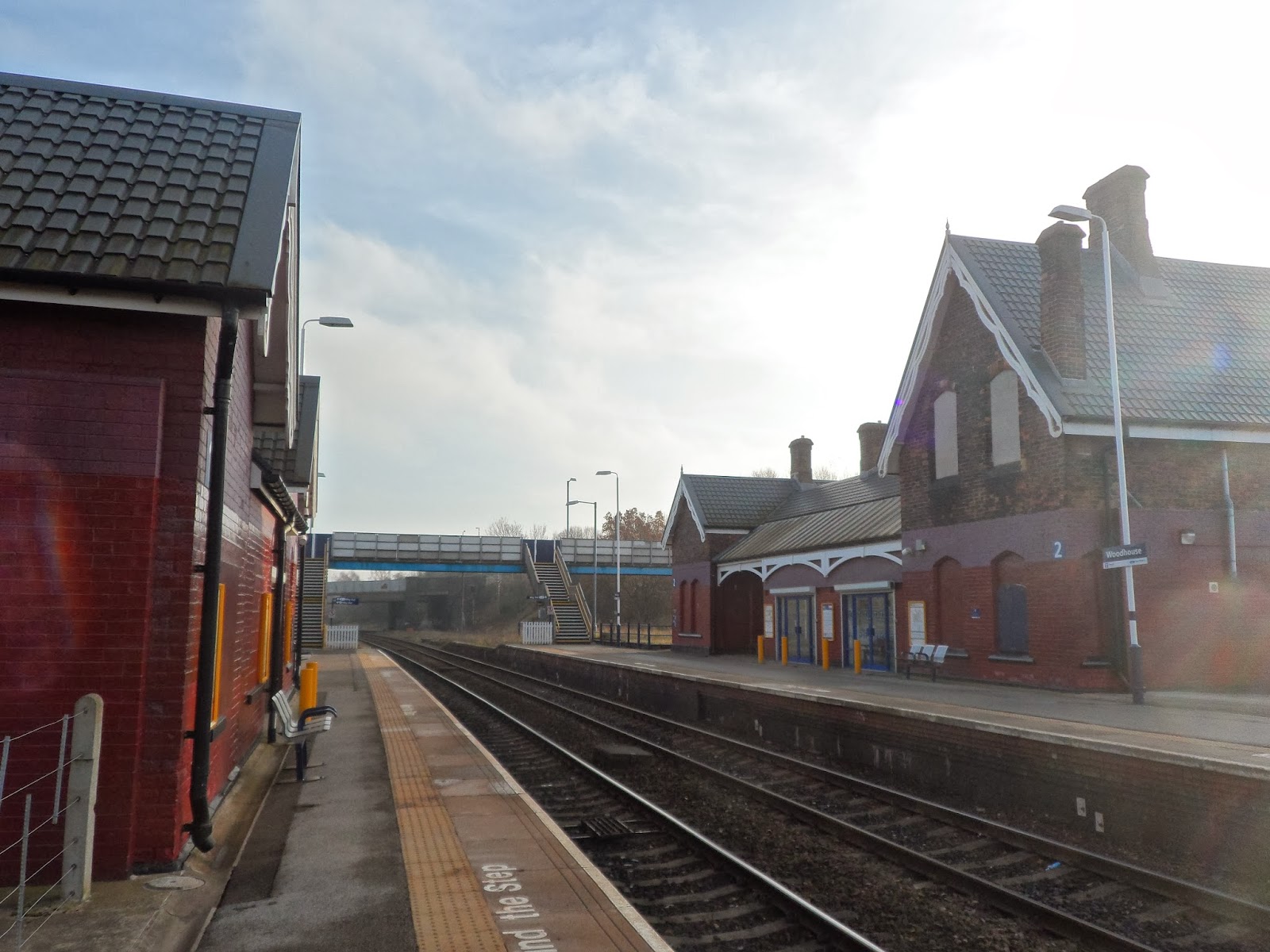 The local transport executive have clearly spent a little bit of money on the station, bringing it into the 21st century with nice floors and glass doors.  No ticket office, obviously - the information board informed me that the nearest manned station was "Sheffield - six miles", just to rub it in my face - but certainly a better place to wait for your train than Darnall.  I was particularly taken by the shiny red paint used to cover the platform buildings, a glossy clay colour that seemed invulnerable.  It looked less like paint, more like a kind of sprayed on red Kryptonite. 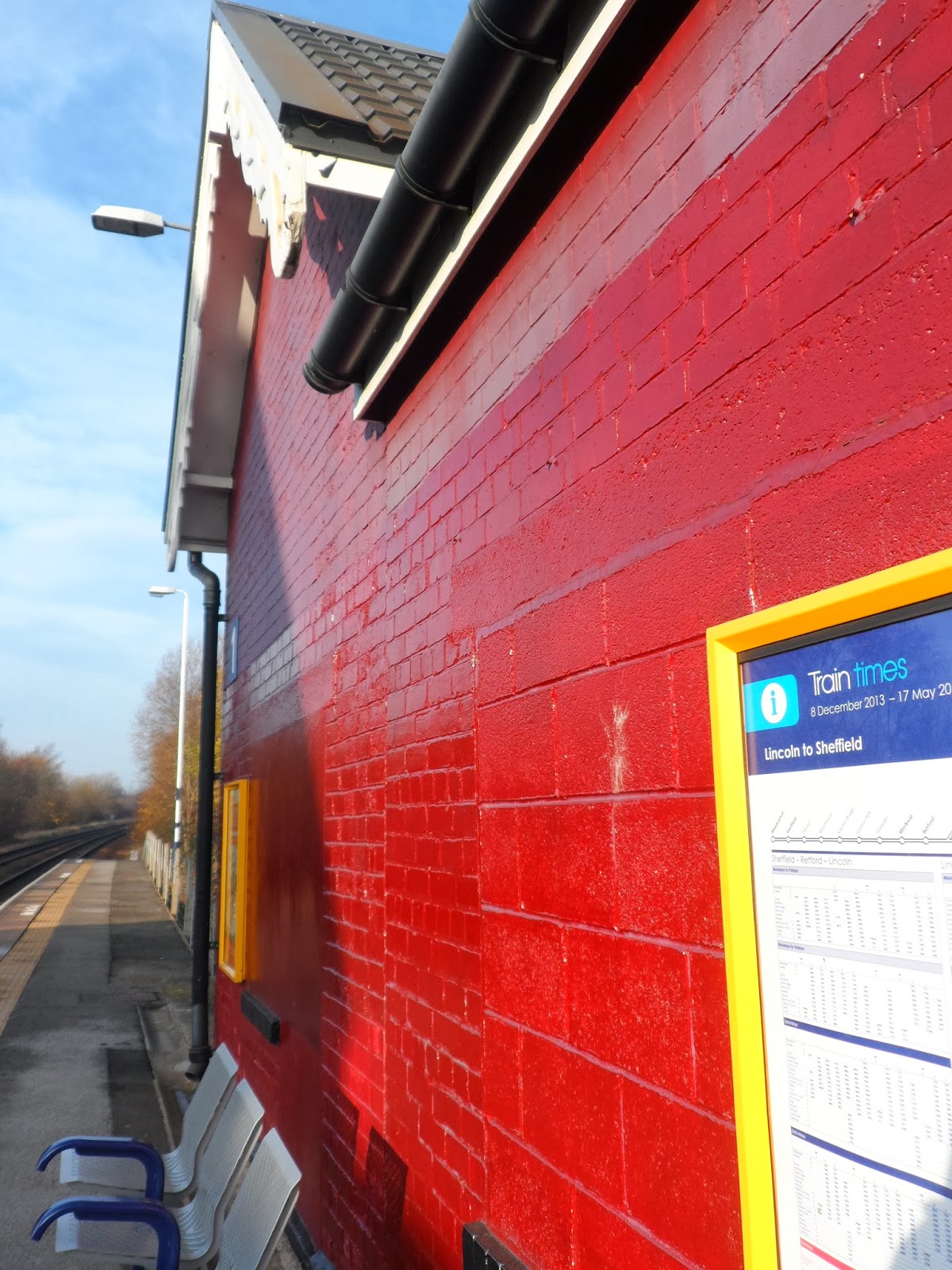 My train finally arrived, with a chirpy guard singing to himself, and dropped me off at the next station, Kiveton Bridge.  It was a lot better used than the two previous stations, with well-to-do ladies disembarking with department store carrier bags.  They flirted with the guard as they climbed down onto the brick platform. 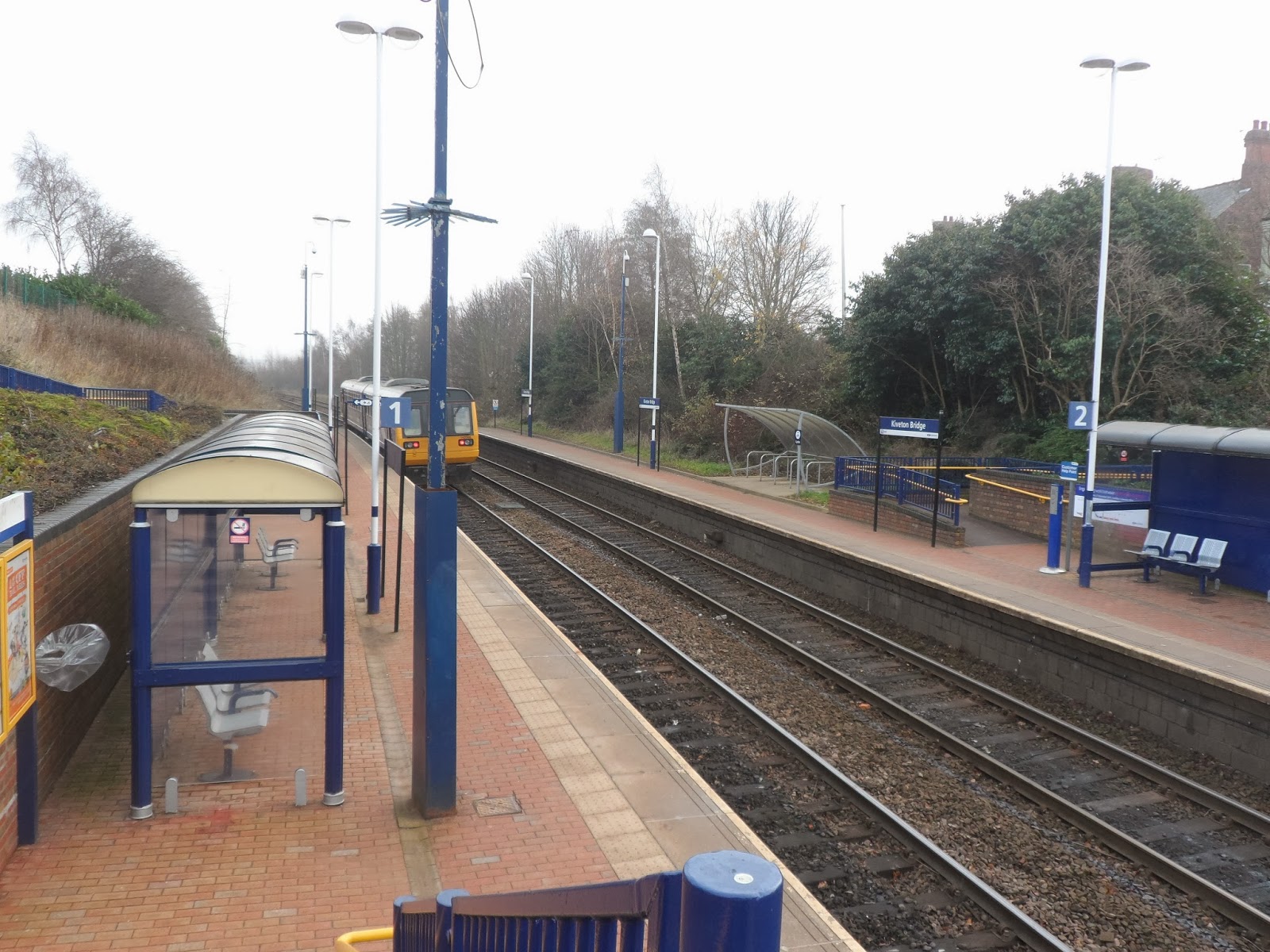 I get the feeling that Travel South Yorkshire can't really be bothered with their train stations.  They always seem a bit abandoned and unloved.  I suppose it's like Manchester; they've got a load of trams to play with - why bother with boring old trains?  It's an irrational prejudice, but when you get up to the street and find that someone has half-unpeeled the station sign, it doesn't fill you with pride.  Perhaps it would help if they didn't make their signs out of sticky backed plastic. 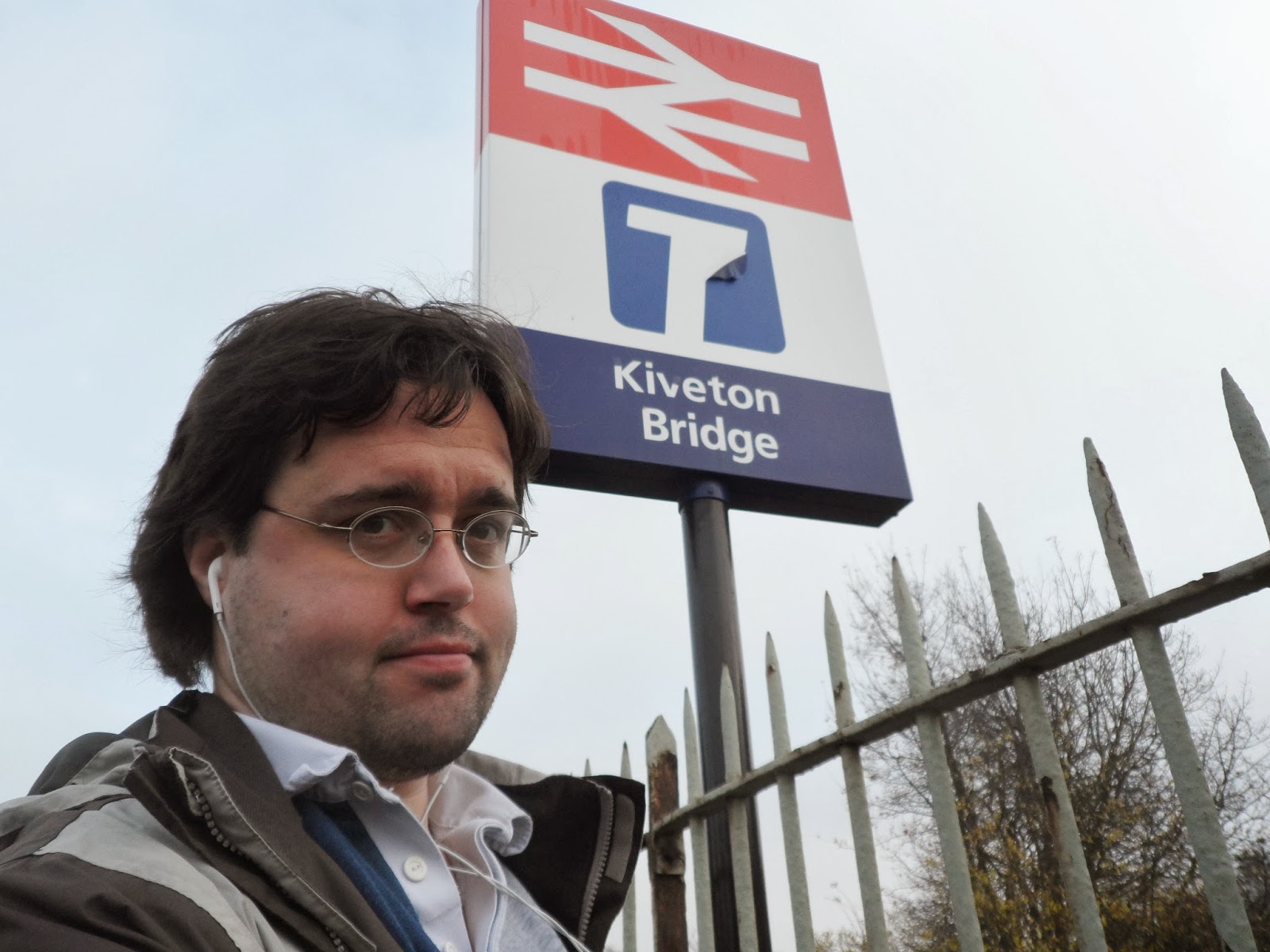 At some point I'd crossed from Sheffield into Rotherham, and I have to be honest, you could sort of tell.  Kiveton seemed a bit more down at heel and grim than the areas I'd walked through earlier that day.  Rotherham is doomed to forever be in the shadow of its bigger neighbour, I know, but as I walked down Station Road, I thought there might be a good reason for that. 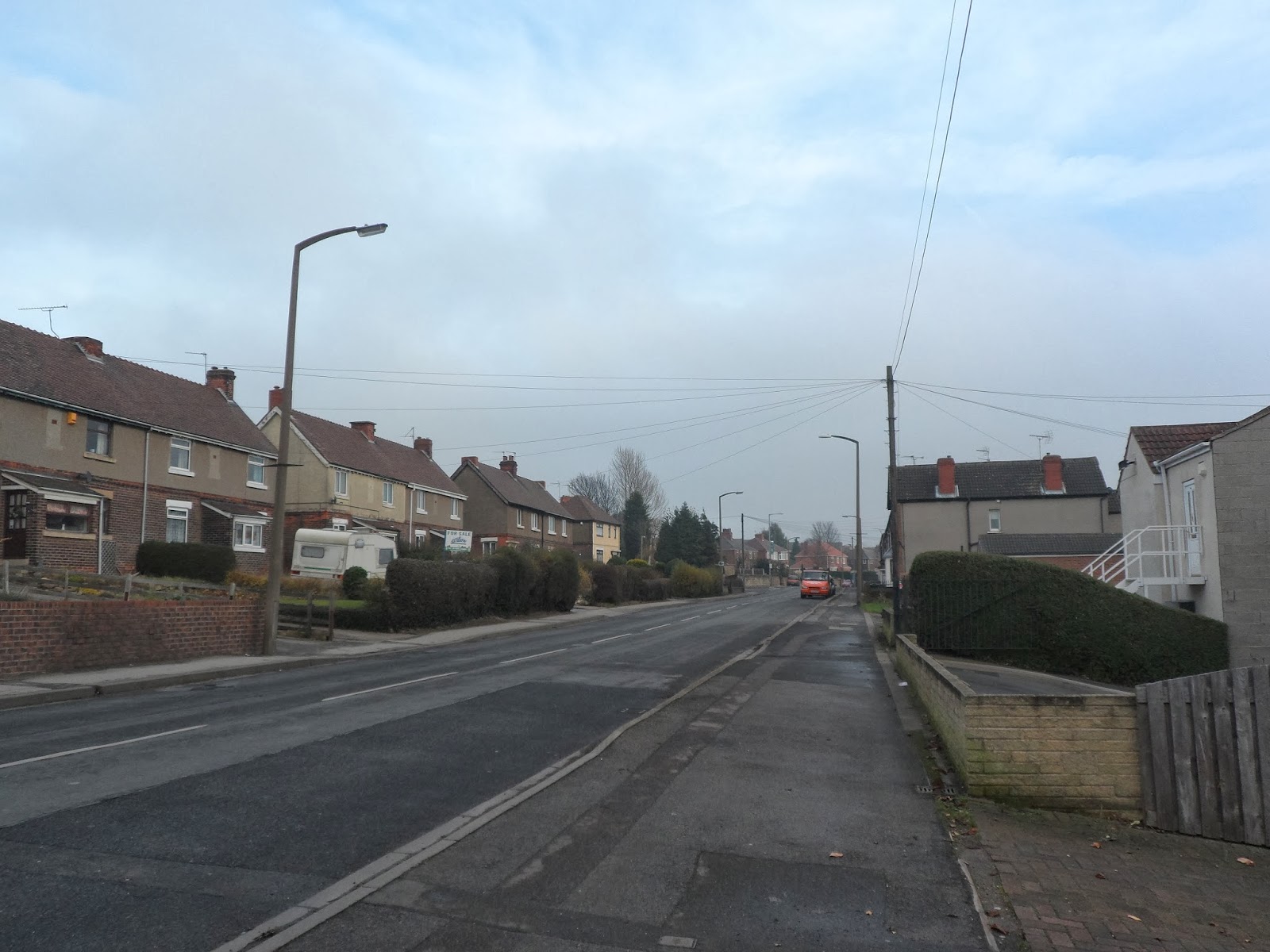 There used to be a colliery at Kiveton Park, but it closed twenty years ago, somehow surviving Thatcher to finally shut up shop in 1994.  Now it's just another commuter village.  Slowly the houses began to disappear, and I had to check Google Maps on my phone: was I actually going the right way?  I'd read that Kiveton Bridge station was built because the council thought that the older station, Kiveton Park, was too far from the village; I didn't realise they meant it was in an entirely different district. 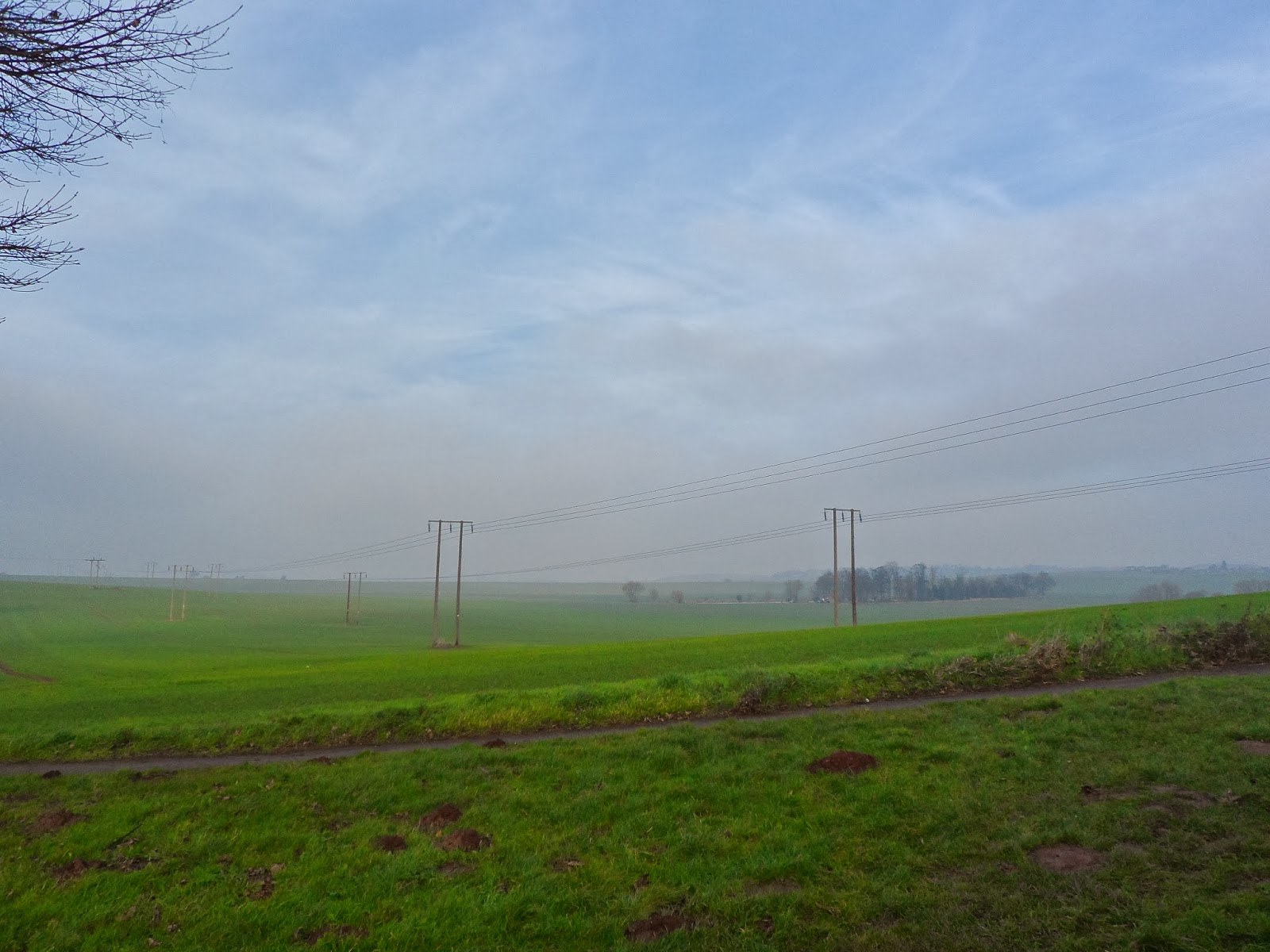 Soon I was on a country road.  I could hear the noises of industry echoing up from the valley below, but I couldn't see it; all I could see were hills and misty fields.  I wondered if this was the same mist I'd seen in Dore that morning; that it was so cold and damp out here the low winter sun hadn't been able to drive it away. 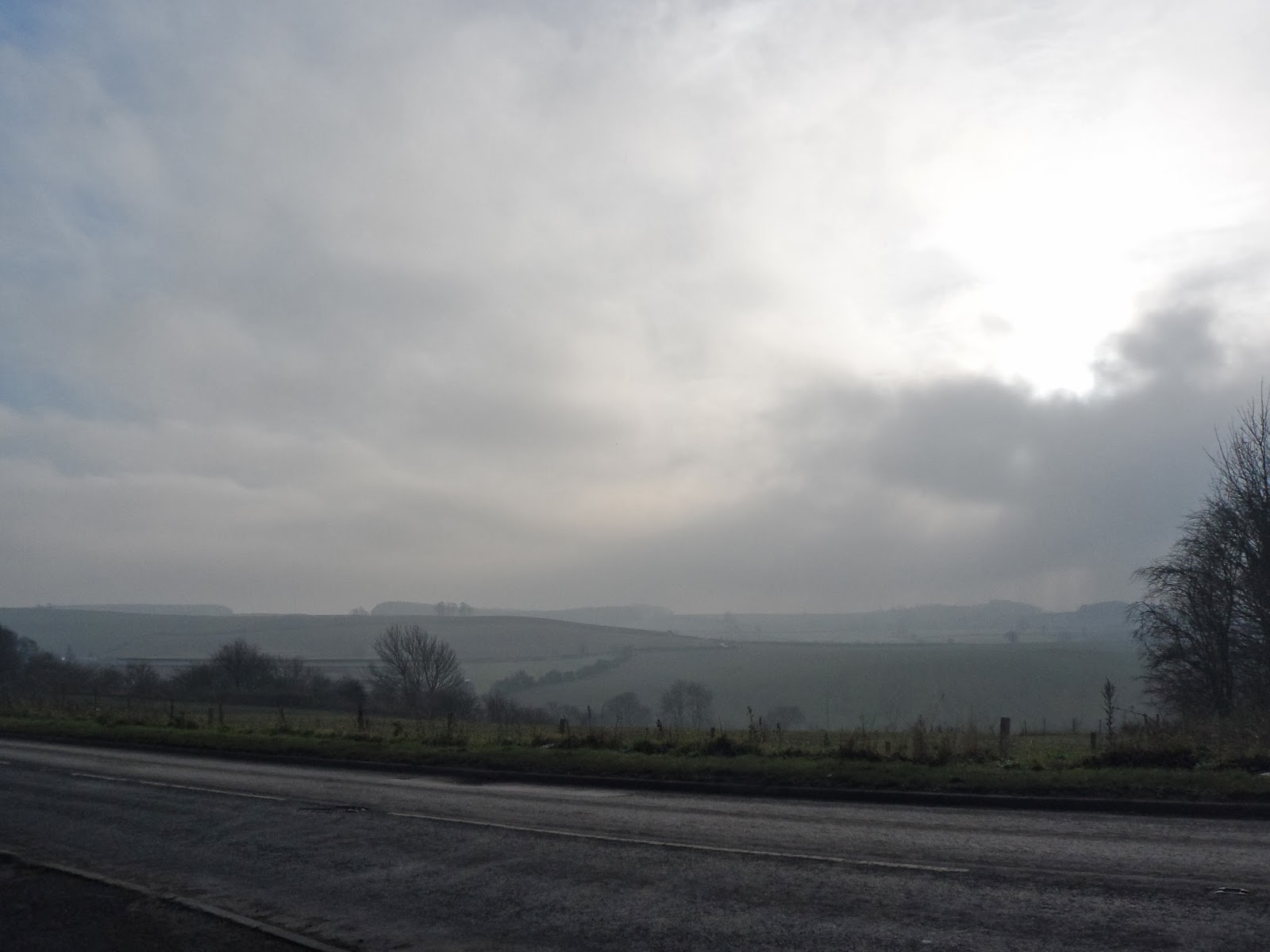 I was still unsure whether I was going the right way when I rounded a corner and practically walked into the station.  The council definitely had a point; Kiveton Park station is no good for anyone.  There was a pub over the road, but sadly it was closed for refurbishment.  Apart from that, the only neighbours were a canal and a cement works. 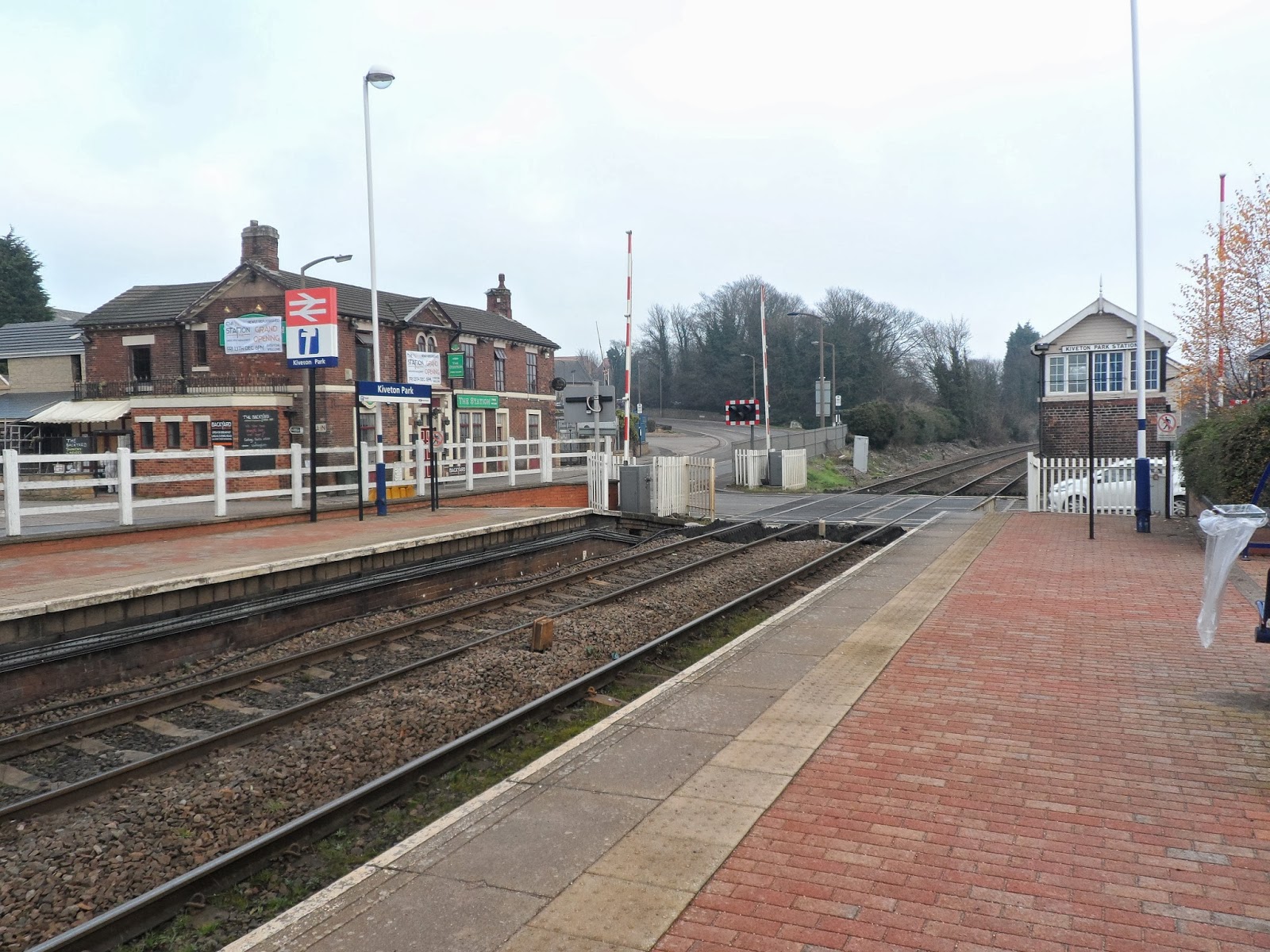 I killed a bit of time by wandering along the towpath, but it didn't seem to go anywhere interesting, and I was put off by the sign from the local anglers saying that "no firearms" were permitted.  I wondered if this was a big problem; if they'd had a spate of fishermen with double barreled shotguns trying to blast the sticklebacks out of the water. 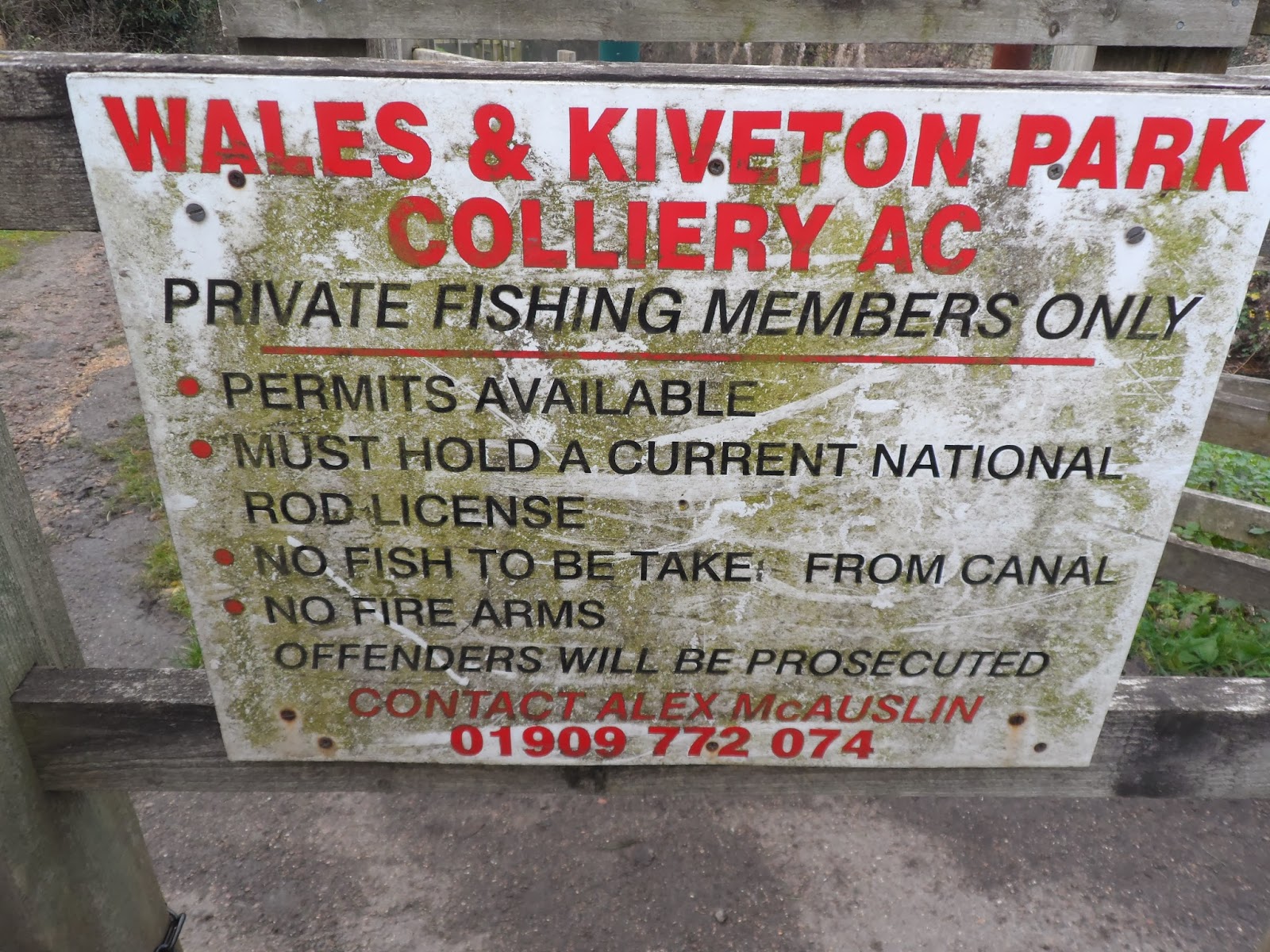 I headed back to the shelter.  There was a sealed area, with a door, but it didn't have any seats in it, just a pole to lean on.  This was no doubt to discourage anti-social behaviour, but it just seemed mean to me, a passenger who had half an hour to wait for his train and who didn't fancy getting cramp in his arse.  Still, if the anglers are wandering around with Uzis, who knows what the local scallies carry with them; probably best not to give them somewhere to loiter. 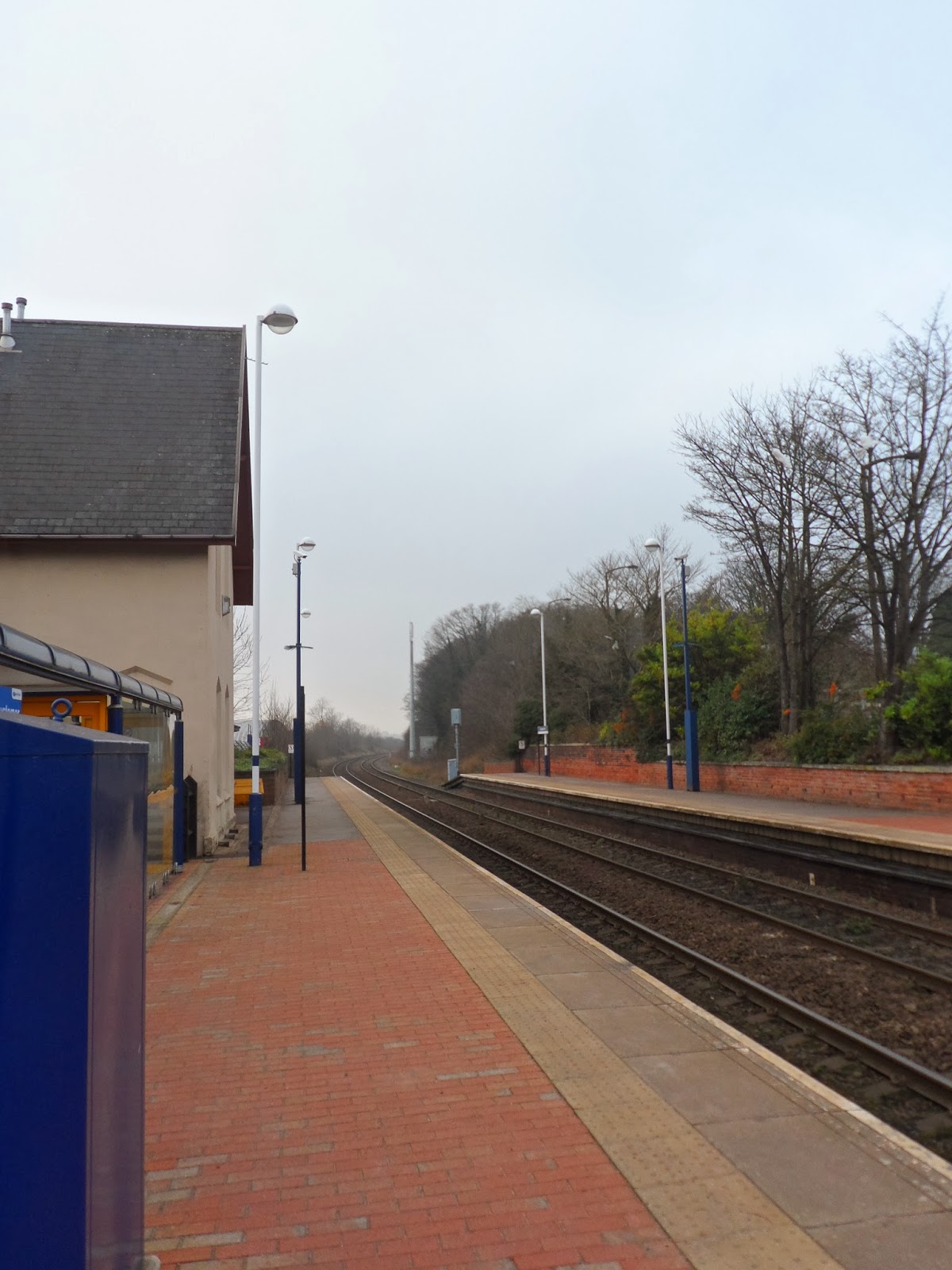 Last trip of the year, I thought sadly.  Funny how it stopped being "something to do" and became "something I really want to do."  I wandered over to the Northern Rail map.  Where to go for the first trip of 2014? 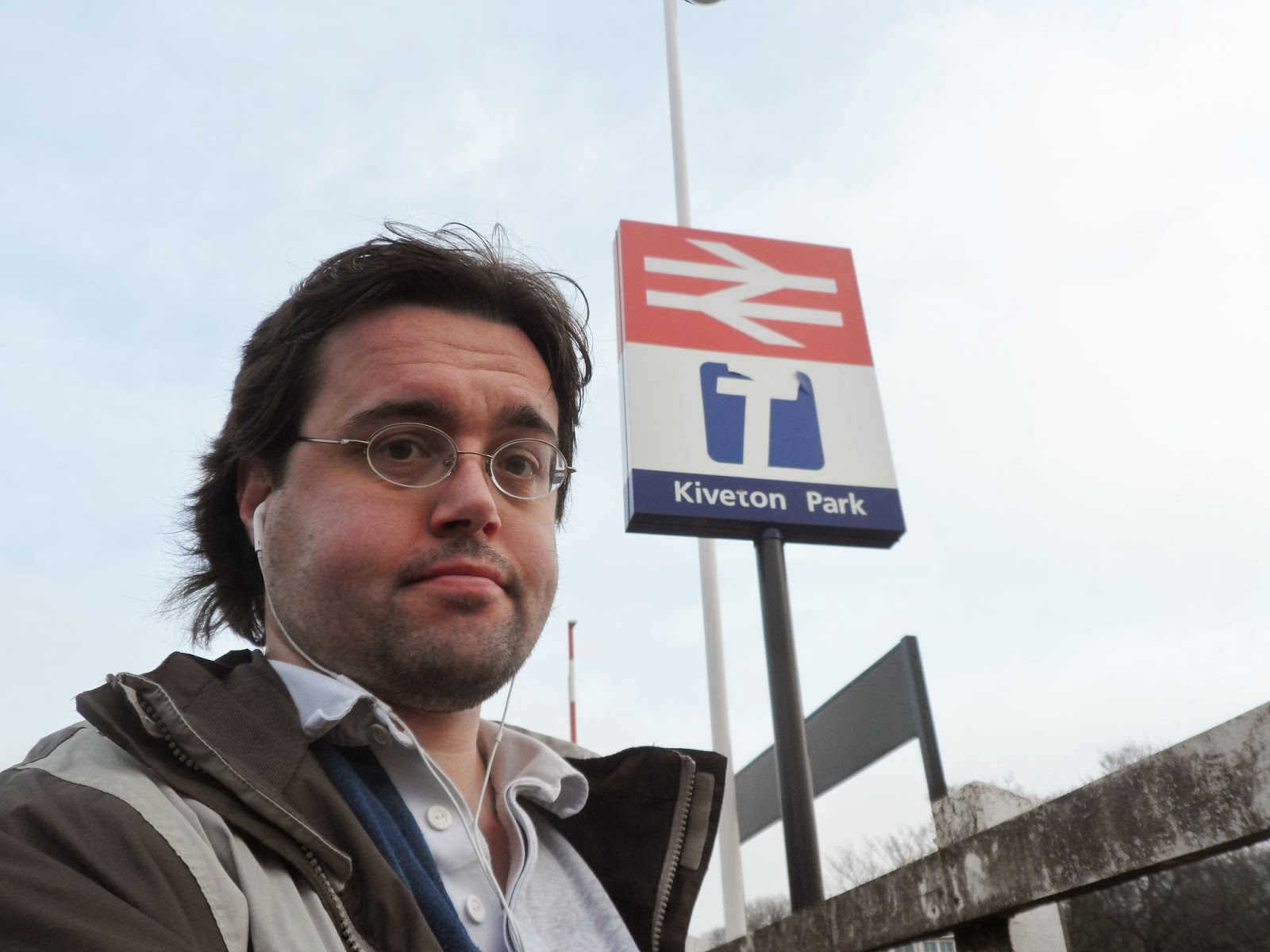 As someone who's been reading your blog whilst you visited places I didn't know it's been interesting to see what you had to say about Sheffield and surrounding area (where I live).

FYI. The reason the fire service building (it's not their HQ actually it's their training centre) looks a lot like a school is because that was what it was when it was built.