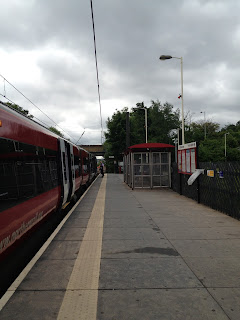 I left Fizinghall through the wrong exit.  There were two on the platform.  One was being watched over by two revenue protection guys, chatting away, oblivious to me getting off the train.  The other exit was right in front of me and opened up into a little back street.

I immediately realised there wasn't a station sign, so I had to go down a side alley to reach the other exit.  The alley smelt of late night booze, smashed cider bottles and lager.  I clambered up the steps to the road and took the prescribed photo. 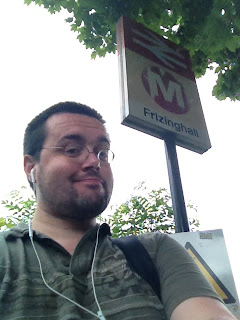 I was soon on the main road.  There was a real stench here, a smell of rotting food, a smell like the bottom of a bin.  I realised that I was alongside a recycling depot, belching out a stale scent of waste and detritus.  A constant stream of liquid pissed out from under a gateway, puddling in the gutter.  I don't know what it was.  I don't want to know what it was.  I just wanted to get past the six foot wide pool in the road without being splashed by a truck.  Three recycling workers watched my passage, silencing their conversation as I passed, holding their cigarettes as a challenge.

Once I crossed at the lights the smell went.  The factory unit was replaced by a carpet warehouse (Passing this store can seriously damage your wealth!!) and then four storey blocks of flats, cross shaped, dotted amongst grass.  The ground floors were blocked up.  Metal covers over the windows to stop arsonists and squatters.  The only windows with glass had bars over them and a printed poster in the window for a community forum. 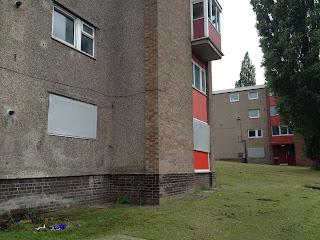 Past Whitakers (We only use vegetable oil for our chips) and then a bit of a hill, with brick maisonettes overlooking a patch of green.  On one balcony, four young women had set themselves up for the day.  They sat in the warm morning, wrapped in t-shirts and trackie bottoms, sharing gossip.  Ashtray on top of the kiddie's toy box in the middle.  There was a scrap metal yard, then a turn, then I was in Shipley town centre. 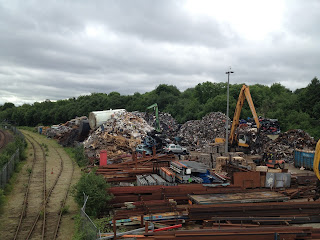 I'd been here before, in March, collecting the station there and then Saltaire.  Approaching it from Frizinghall changed my perceptions.  Then I'd been charmed by its 1960s precinct.  Now I remembered the pound shops and the lack of modern facilities.  What was charmingly old-fashioned to me, a tourist, was all the locals could get.  It wasn't being preserved as a fine piece of post-war architecture; it was just that nobody had bothered updating it.  It was like spotting the plastic surgery scars on a beautiful face, the brutal infill of reality. 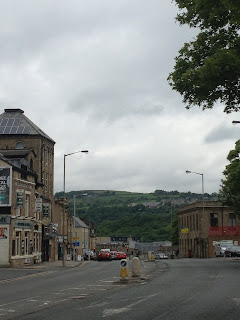 I didn't revisit the precinct.  Instead I turned away, passing another restaurant advertising its use of vegetable oil, and adding "meat products cooked in a separate fryer".  It finally dawned on me that in an area with a high Asian population, no-one wanted their chippy tea tasting of distinctly non-Halal pork sausage.

At the Baildon Bridge over the River Aire, an incongruous sight: a dog in a dinghy. 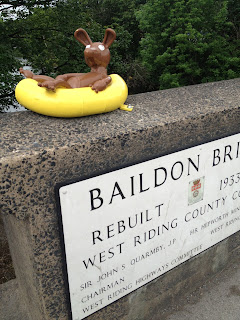 I stared at it a little too long.  What the hell was it?  What was it doing there?  When I got back home, I hunted for info about it, and after twenty minutes of solid Googling I found out it was part of the River Aire Sculpture Trail, a new tourist attraction in Saltaire.  It might have been nice of them to actually let us know.

I took a left turn at the Junction pub and began to slowly climb the hill into Baildon.  The busy A road was soon behind me, and I trekked up a steep slope to the outskirts of the town.  Houses changed as I rose higher and higher.  Terraces gave way to semis.  Driveways appeared.  Hedges and trees.  As I left the valley below me the poverty seeped away, as though it got altitude sickness.  By the time I reached Station Road, there were long gardens and detached homes and gates. 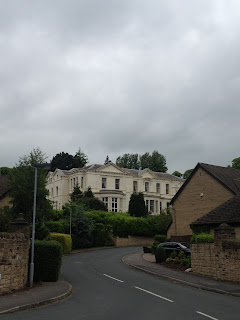 Baildon station was almost rural, surrounded by thick woodland on a bend in the road.  The station building had been given over to the wonderfully named "British Rubber Co."; a puffed up title for what was just a tyre wholesaler. 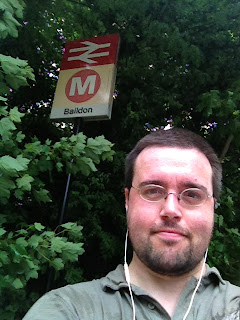 Little spots of rain fell as I wandered onto the platform.  I was quite glad of them, cooling me down after the exertion of climbing the valley sides. 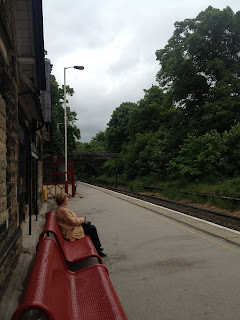 There used to be two platforms here, but rationalisation reduced it to one, which serves trains in both directions.  The remnants of the old platform were wild and overgrown across the single track.  Behind me, I heard the wail of industry and scream of machines inside the old station building.  It was a bit disconcerting.  It was like hearing an argument coming from your neighbour's house - I had a vague feeling that something unseemly was going on behind there.  If there had been a few bloodcurdling screams in there as well it wouldn't have been out of place. 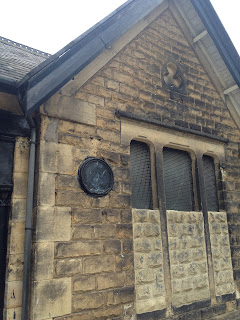 At Guisely the Bradford and Leeds branches merge together, and the station was far larger and well-patronised.  There was a ticket office.  It looked a bit like a bus shelter with ideas above its station but it was still good to see. 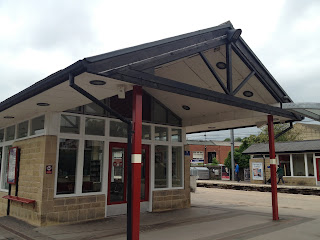 Another train slid into the opposite platform, silent on electric power, as I looked around.  The goods yard had been turned into a little business park, imaginatively called The Sidings, and I followed it up to the main road. 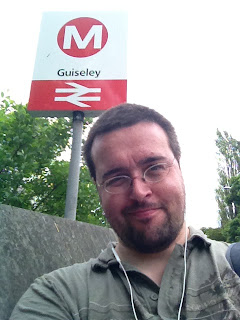 If Baildon had hinted at a shift in socio-economic status, Guiseley made it plain.  This was small town, high end living.  A busy crossroads was surrounded by boutique shops, pubs and cafes.  There were estate agents with expensive houses under offer in the window.  Beauty salons - including the brilliantly named Guise and Dolls - advertised their "Prom Specials".  Proms?  Proms?  This isn't America.  Kids of the United Kingdom: you should be going to an awkward end of term disco, then getting hammered in the school car park on cider.  You shouldn't be going to a PROM. 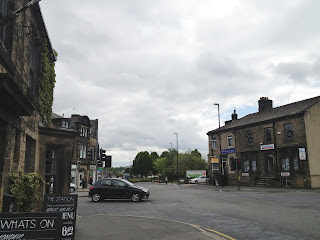 Blocks of "executive apartments" had been squeezed into the tightest, narrowest spaces of land, the fast connection to Leeds and the country air attracting well-to-do commuters.  I remembered again how the area around Frizinghall station was depressed and miserable; amazing what a difference in altitude can make. 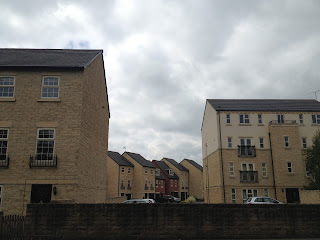 Past the Good Skin Days building (a "Registered Medical Clinic" offering "Facial filler, laser hair removal, anti-wrinkle injections") was the Nuffield Fitness and Wellbeing Centre, with a full car park.  I don't do gyms, as you can tell from my marvellously toned physique, but I was pleased to note that it was housed in the old tram garage. 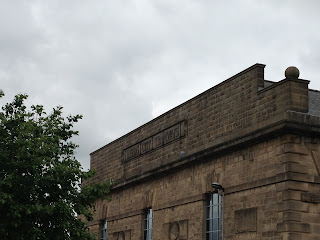 I can only assume Guisely's fitness obsession comes out of a sense of guilt, because for years, it was home to the largest fish and chip restaurant in the world.  Harry Ramsden started his famous chain of chippies in Guiseley, a fact commemorated with a blue plaque: 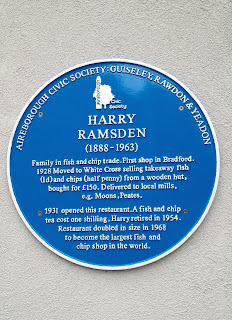 I assume the signmakers charged by the word.

I've never really got the fuss over Harry Ramsden's, personally; I went to the restaurant they used to have in Brunswick Dock (now a branch of the excellent Delifonseca) and I've been to their Blackpool branch, but it was just... fish and chips.  I couldn't find anything special about it.  In fact, my local chippy does far nicer chips, and I can get some from there then sit around in my pants watching a DVD, which I can't do at Harry Ramsden's.  Not without a constable being called for.

Also, you can't claim to be the finest chip shop in the world if you don't do saveloys.  I know you Northern types don't believe in saveloys - and I will concede that the fishcake you do up here, a mass of mashed potato and cod in a bright orange package, the size of a cricket ball, is a perfectly acceptable alternative.  But if you're going to be the best chain of fish and chip shops on the planet, you need to offer a pink saveloy for your more discerning clientele.

This is all moot anyway, because the Guiseley restaurant isn't a Harry Ramsden's any more.  The chain closed it back in 2009, in the kind of brutally unsentimental corporate move that makes me want to never darken their doors again.  Happily, the restaurant was purchased by a Yorkshire chain of restaurants, the Wetherby Whaler, and they've reopened it. 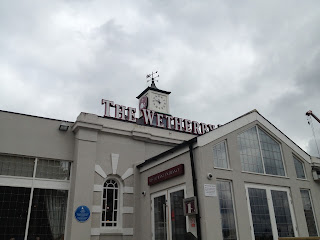 Another sign that I'd progressed to a richer area of the district; they didn't tell you where they fried their chips.  The poor immigrant communities didn't come this far into the hills.

I resisted the tempting waft of grease and fatty carbs and carried on out of town.  A new residential development was springing up on my left on the bones of an old lunatic asylum.  The grounds were being turned over to semis and townhouses while the main building was becoming a block of flats.  I'm not sure I'd be happy living in an asylum.  I imagined the kind of people who were thrilled by the history.  Darling!  Imagine all the dirty protests that happened in this room!  We must buy it! 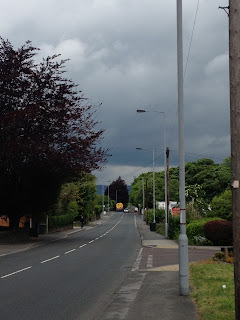 Also, the development is called "High Royds", which is a bit too close to "haemorrhoids" for my tastes.

Menston seemed like a perfectly normal, quiet village.  The community notice board at the railway station hinted at a dark future. 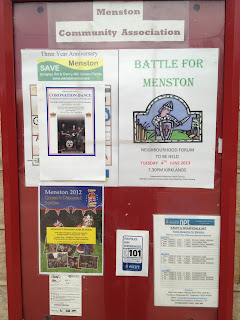 The Battle for Menston?  Complete with a soldier?  It turns out that there are plans to build on some farmland nearby; it's not Game of Thrones.  I liked the over the top nimby-ness of it though.  I wished I'd been around for the public meeting just to watch everyone get steamed up. 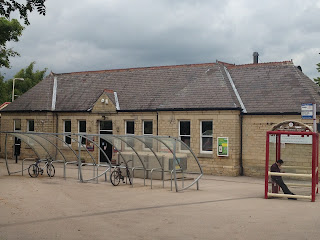 The station building looked smart, but closer examination revealed very little of it was devoted to the railway.  There was an Indian restaurant upstairs, the 1875, and a sadly-closed coffee shop took up most of the downstairs.  I'd been teased by the signs advertising hot drinks, and had visions of another wonderful tea room.  No such luck. 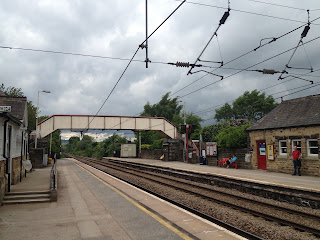 It also had another ticket office.  I thought back to Frizinghall - abandoned, unattractive, nowhere to sit or wait.  That's the place where there should be a ticket office, not out here in the comfortable countryside.  Frizinghall needed the security of a staff presence - it needed the protection of people.  Too much hassle, I expect.  Too much risk.  So the poor area gets nothing, which means the station is used less, which means a little cycle of neglect and resentment and class division.

It's just a ticket office.  It's not the world. 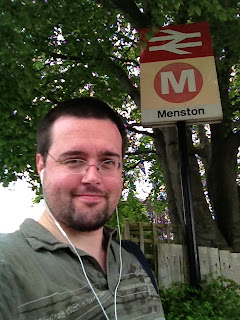 I'm enjoying your jaunt to my neck of the woods (Guiseley is my local station). The only reason I ever use Frizinghall station is to get to Cartwright Hall and Lister Park, about ten minutes walk away.

I only googles the words 'passing this store can seriously damage your wealth' because I'm looking at buying some carpet and this place does some good deals, and then I found your blog as you were the onlt proper result. Good blog, enjoyed reading it a lot, a lot of truths.