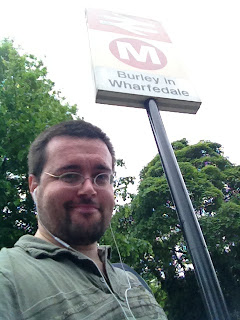 There's a perfectly simple way to get from Burley-in-Wharfedale station to Ben Rhydding.  You go straight down the A65.  It's a fast, direct route and won't take you very long.

I didn't go this way. 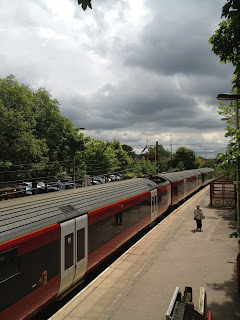 Instead I turned off the main road and into the tree lined avenues that hide behind.  There were elegantly designed detached homes here, perfect stockbroker material, houses that would have frighteningly high mortgages and wouldn't have looked out of place in Surrey.  Jerry and Margo could have been behind any of the front doors having their first cream sherry of the day. 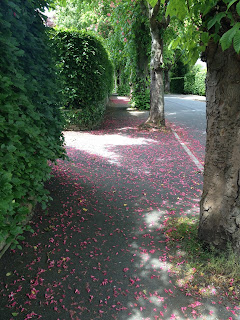 At the end of the road there was a downward shift.  Sometime in the sixties a farmer had sold his fields, and now this quiet avenue lead straight into a housing estate.  Far more declasse houses, semis, terraces, lower middle class.  The kind of place people wash their cars on a Sunday afternoon while discreetly judging their neighbours' lawnmowing skills.  Margo and Jerry must have been horrified when they realised their quiet lane had become a through route for people in Austin Princesses.

There was still some farmland left though.  The road ended with a two way split - a bridleway to the left, a footpath straight on.  I took the bridlepath up the hill.  It rose past a farm to a foot crossing against the railway.

There's always a bit of nervousness when I walk across train tracks, but it was doubly unnerving this time; not only was there a very frequent service on this line, it was run by silent electric trains.  This wasn't a route operated by rattling Pacers you could hear three miles away.  I nipped across, desperately hoping not to be scythed in half by the 12:32 to Ilkley. 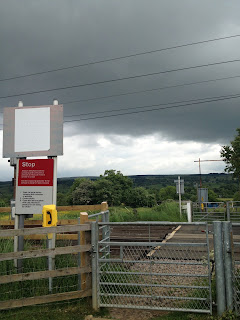 Decades of walkers had tramped a groove across the field.  The grass there was the same length as the rest of it, but you could see a line in the landscape, like a track on the map made real.  I passed sheep taking a lunchtime siesta in the shade of thick trees and heard a trickle of a tiny hill stream.  Turning to look back I was rewarded with a view clear across the valley. 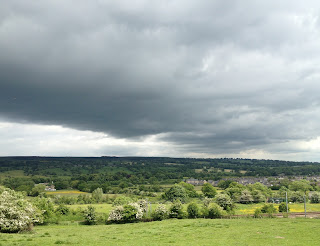 I put that scary looking sky out of my head and clambered over a stile.  The path seemed to disappear now. Ankle high grass waved softly in the breeze, but there wasn't a marked path anywhere.  I trusted the tiny directional arrow that had been screwed onto the stile and marched across, hoping a farmer wouldn't suddenly pop up and interrogate me. 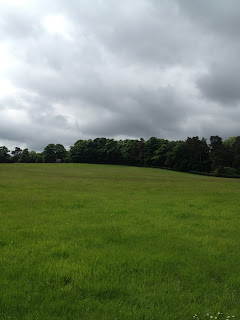 That was where I'd gone wrong.  That friendly arrow on the stile was a misnomer, sending me in the wrong direction.  I exited the field and, after more Ordnance Survey consultation, I figured I'd take a left and then the next right. 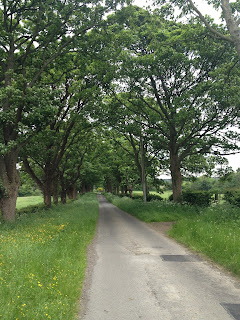 Except there wasn't a next right.  There were a lot of dead rabbits, squished under the wheels of passing farm machinery (bringing back sad memories of my own dear departed Fiver - RIP) but there weren't any right turns.  I walked all the way along the back road, wondering where I'd come out, and finally exiting onto a proper carriageway again.  Behind me was a sign: Private Road - No Parking, No Public Footpath.  Whoops. 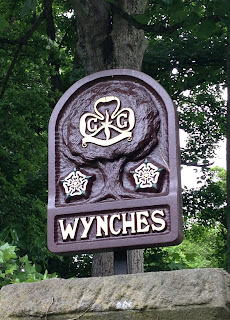 I was surprised by the presence of a Girl Guide camp.  Firstly, I assumed they'd just share the facilities with the Boy Scouts.  Though I suppose that raises the spectre of sexual intermingling, so I guess that's out.  Secondly, I didn't realise the Girl Guides were still going.  I thought all the girls who liked being outdoors and camping and stuff had just joined the Scouts, now it was an all-inclusive organisation.  If I was a teenage girl with a mad urge to go orienteering I wouldn't join the namby-pamby Guides when you'll get far more rough and tumble in the Scouts.

I found a bench and consulted my map.  I was sure I should have reached civilisation by now, just a few houses on the edge of Ilkley, but instead I seemed to be deep in the countryside.  I cross referenced Google Maps with the Ordnance Survey and discovered I'd gone the wrong way.  Not only that, I'd actually gone in almost a complete circle.  I was back on the edge of Burnley-in-Wharfedale.

This was both frustrating and depressing.  I'd wasted an hour of my time going nowhere, basically, which meant I'd have less time in Bradford and Ilkley on the way back (I had an inflexible return ticket).  I'd have to turn round and go back to a station I'd already been to, which would throw out my pattern.  It was all just rubbish.

Or... I could head further up the hill and go round the long way. 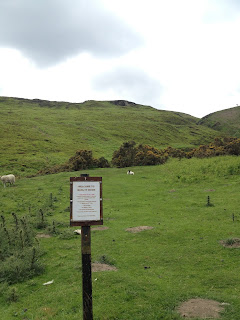 Really, there wasn't any option.  I hate going back over old ground.  I like to go to new places and new paths.  I pushed on to Moor Road, which skirted the southern reaches of Burley Moor.  If I'd had more presence of mind I'd have pushed on and used the Dale Path, rather than the pavement-less highway, but I wasn't really sure where I was.  At least this way I wouldn't end up doing a Cathy all over the moors for the rest of the day.

It didn't seem very moor-y.  It was green and lush, instead of the desolate landscape I'd expected.  I expect that higher up it becomes craggier and less hospitable, but down at this height it seemed almost cosy. 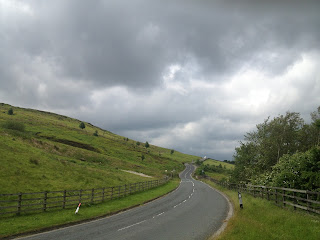 There were sheep all over the place.  Stupid, easily shocked sheep.  They stared at me approaching - sometimes from the opposite side of the road - and then spontaneously hurled themselves onto the tarmac.  They looked at me, 5'9 of human, and decided that I was a greater risk to their safety than two tonnes of Subaru doing 50 miles an hour.  I began to get quite stressed every time I saw another cluster of sheep, trying to time my approach so that there were no cars or blind bends.  Time and again I was left on the verge, staring down a sheep, while a parade of vehicles crawled by.

I began to resent them after a while.  Why are you so stupid? I thought.  Just stay where you are!  Stop running around!  Part of me hoped they'd get hit just to teach them to be afraid of the cars more than the humans, and then I felt guilty, because I really didn't want to see a lamb bleating in pain as it was crushed under the wheels of a BMW.  So I continued my halting dance with the livestock, over each hillock, round each turn. 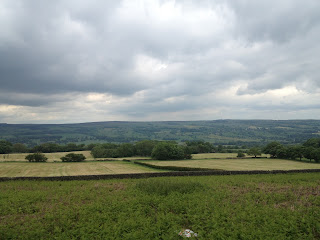 It was hard to feel too aggrieved when I was taking in views like that.  I was envious of the cottages and farmsteads that got to see that every day, a place where the turn of the seasons could be observed on an almost hourly basis.  Beautiful countryside, just barely tamed.

The Cow and Calf is a rock formation on the fringe of Ilkley Moor, composed of a large piece of rock next to a smaller one (hence the name).  It rose up in the distance, but from my perspective, it looked less like cattle and more like a human face in profile.  It reminded me of the Crazy Horse Memorial being carved in South Dakota, raising the intriguing idea that there was a whole body underneath the face.  Perhaps it was buried, a giant stone man ready to lurch out of the soil and stride across Yorkshire. 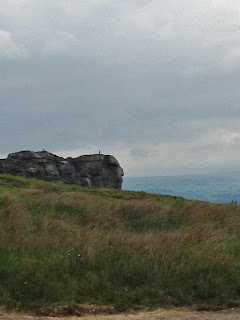 It's a big tourist attraction in the area - the Cow and Calf lets you climb without any of those annoying crampons or potential plummets to your death - so there was a car park and a little tourist information spot and, even better, this: 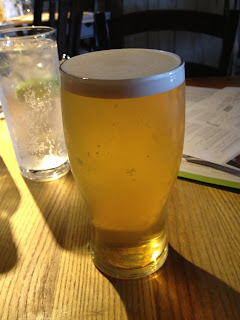 Well, it was lunchtime, and it was as good a spot to stop as any.  I ordered the lamb meatballs with my pint, in an act of vengeance against the stupid sheep I'd encountered en route, but they'd run out.  I had the chicken instead and pretended it was lamb. 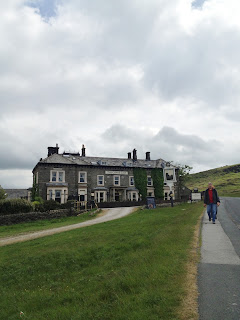 Cheerfully full, I headed back out again.  The road continued in a gentle incline down to Ilkley, but I took a shortcut, finding a back path that lead directly down the hill. 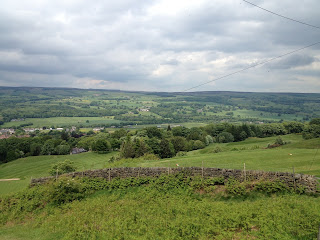 When I say down, I mean it.  At times the path was almost vertical.  I imagined the locals using it on the way back from the pub, and I wondered how many people had slipped and cracked something late at night.  Or drunkenly bounced their way right down to the bottom, giggling all the way.

It came out in a cul-de-sac of bland houses, nouveau riche chic.  They built a lot of these houses in the Seventies and Eighties - four and five bedrooms, balconies, stone walls.  Ostentatiously big and not at all classy.  They were houses for people with a bit of money who wanted space and all mod-cons - no draughty Thirties villa for them; they wanted a house with a peach en-suite and a combi boiler and good access to the golf course.

I reached Ben Rhydding proper, and found a high street full of hairdressers and florists and - the giveaway - a deli and bistro.  An ugly Methodist church lorded over the village centre, misshapen and out of proportion, big rather than grand. 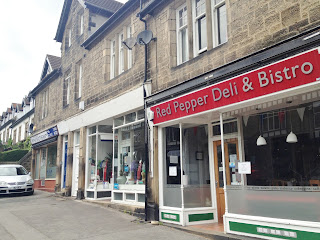 The station was further down, past a phone box that still had the yellow post-privatisation Telephone logo.  The buildings had, of course, been sold off to form private homes, and were now covered with ivy and flowers and subdivided into cottages. 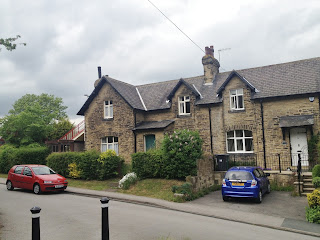 There was a car park, full of saloons owned by Leeds commuters, and two platforms and a footbridge.  It was a nice enough place to stop. 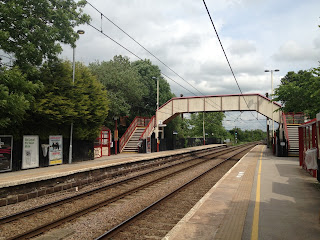 Ben Rhydding's the penultimate station on the line.  I settled in and waited for the train to my last stop: Ilkley. 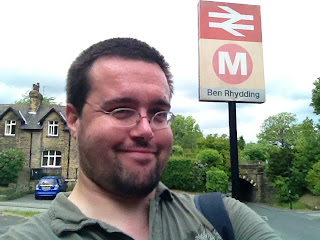 Guides more popular than ever at the moment! Huge waiting lists for all age groups. Signed, a Guider.

Girl Guides? RUBBISH Guides, more like. AM I RIGHT?

*holds hand up for high five*

Ben Rhydding - sounds like someone who would be burl(e)y in Wharfedale!

Your blogging was quite detailed and very informative. Recently I have taken loan by a private source for church loan in USA. It's Griffin Church LOans. Its help was like a blessing.