Damn you, Leeds.  As if your teasingly sexy railway station wasn't enough, your trains are also rather lovely as well.  I was on a whisper-smooth electric train, heading out of the city, sitting on a comfortable purple seat and peeking out through windows that had been tinted so my poor eyes would be shaded from the sun. 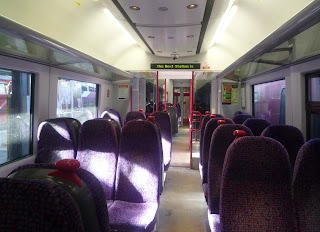 This is a class 333 train (yes, I had to look it up) and was designed to run on the Heathrow Express.  Sadly West Yorkshire Metro haven't carried over the tv screens with the fascinating "Heathrow Express TV" (a loop of BBC News, ads for bland luxury products, and a smiling woman telling you the difference between Terminal 1 and Terminal 4).  Such a missed opportunity.  They could have had episodes of Emmerdale on there or something.

I jumped off at the next station, Shipley.  The lines form a triangular junction, one of only two places in Britain this happens (the other one is at Earlestown), and the station building is nestled in the centre.  I crossed the tracks, past a man wiping down the handrails on the bridge, and ended up in the middle of the triangle.  There was a surprisingly pretty station building here, one which had seen a bit of restoration. 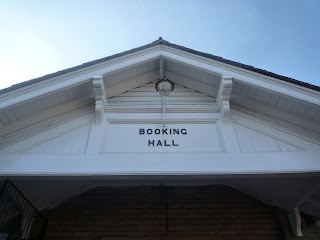 Inside, everything was warm and tidy, with shiny red and cream surfaces.  It had a cheery, turn of the century feel to it, the kind of place where you would happily linger.  Until the police moved you on for vagrancy. 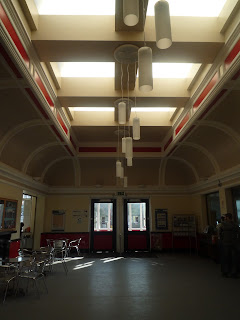 After nearly cracking my nose open on the automatic doors (they swung inwards, which was confusing) I returned to the platform.  There's no direct route from the ticket hall to the road - because of that triangle of lines, you have to cross under the tracks whichever way you go.  I picked the exit via platform 4, one of the back exits, because it would deposit me on Station Road.  That felt more appropriate. 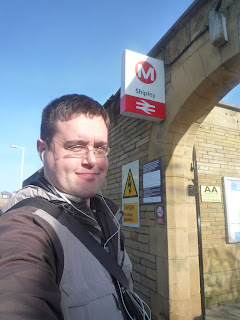 Shipley town centre was a couple of minutes walk away.  It was centred around a pleasing pedestrianised market square, busy with buses and people, though there weren't any actual stalls open that day.  Above it was a modernist clock tower, clicking its way towards the hour. 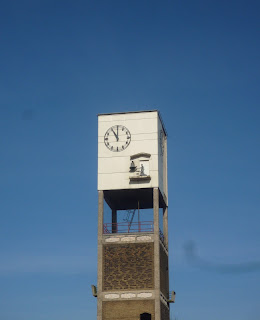 There was an Arndale centre at the other end - a surprisingly small one; I thought Arndale only did town conquering behemoths - and pretty planters and seating.  An Asda supermarket lurked behind on a back street, as though it was embarrassed to show its face. 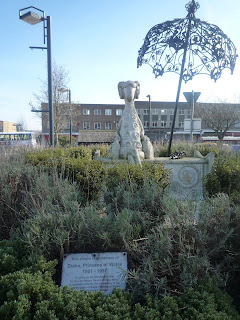 Because when I think of the best way to commemorate Diana, Princess of Wales, I immediately think "bit of paper shoved in a bush next to a sheep with an umbrella".  It's what she would have wanted.

The road out of the town revealed a surprising amount of alternative therapy practitioners and beauticians (including one with a sign outside saying Give her a massage for Mother's Day!, which made me shudder involuntarily).  I don't know if Shipley is a centre for holistic living, or if all the hippies just operate out of one street, but there did seem a disproportionate amount for a low-end Yorkshire town.  Perhaps they're all really brothels. 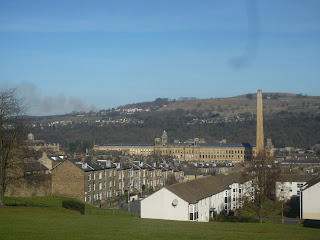 My next stop was far more distinguished.  Founded in 1851, Saltaire was a home for the workers at the nearby mill, and is a pioneer in urban planning.  Much as at Port Sunlight on the Wirral, the employees were rehoused from Bradford's slums into warm comfortable homes, with bath houses, a library and school to keep them entertained and educated.  It was pioneering thought. 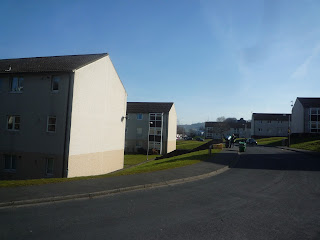 It was a shame, then, that I reached the village through a more modern example of homes for the underprivileged.  Bland, featureless blocks of flats, regimentedly laid out.  A man with a neck tattoo walked his pug past me, bag of dog shit swinging casually from his finger.  Most tourists to Saltaire won't come this way; they get bussed in or come via the train.  It was depressing to see how we abandoned the idea of building the very best homes for workers in favour of a more "will this do?" approach. 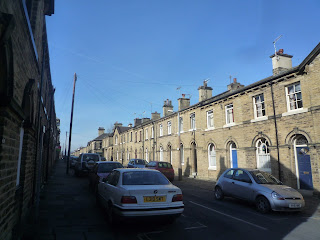 It made me appreciate Sir Titus Salt's efforts even more.  There are streets of two up, two downs all over England, but how many have this level of artistry in them?  Arched windows, stained glass, white painted sills. 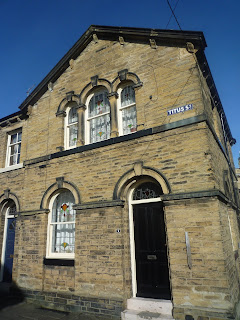 The municipal buildings occupied the centre of the village - the factory school opposite the Institute, built for the betterment of the workers' minds.  The benevolent factory owner believed that just housing people wasn't enough - you needed to stimulate them, provide them with places to be entertained, to socialise, to exhibit.  All of which we seem to have lost.  Councils are cutting their arts budgets by 100% because it's seen as a frivolity; yet here we have a mill owner (perhaps the most capitalist capitalist there is) understanding that it's a valuable part of people's life. 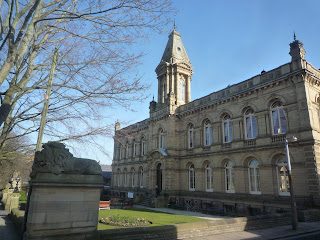 There are shops all around the Institute.  I'm guessing that in the 19th century they were rather more practical than the restaurants, tea rooms and art galleries that had taken the space to suck up tourist money.  Saltaire's a World Heritage Site now; I wonder what the UNESCO inspectors think about the scabby estate next door.  Given their objections to Liverpool's regeneration of its docks, I'm surprised they haven't demanded they're all demolished; the subsequently homeless residents would add a pleasing air of Victorian poverty. 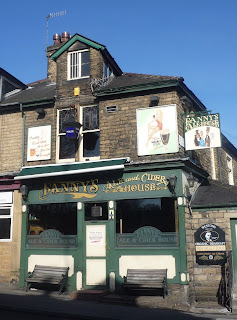 It was too early in the morning for Fanny, so I went to a bakery instead.  I'd packed some lunch before I left the house but I couldn't resist the call of a cheese and onion pastie.  The crisp yellow pastry was the colour of Saltaire's buildings. 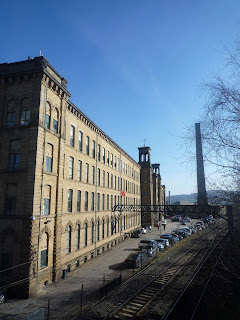 I didn't have the time to visit Salts Mill, now a gallery and work space.  It has a collection of David Hockneys (the artist is a local); if you work your way through their terribly designed, overproduced website you may just be able to read about it.  Instead I headed for the station. 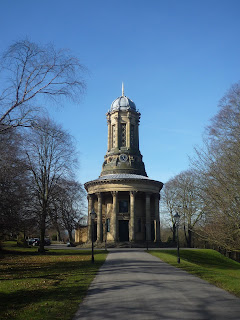 That's the village church, by the way; the station doesn't have a building, never mind a collonade.  The original Saltaire station was closed by Beeching, only to be reopened less than twenty years later.  Apparently there was a significant call for public transport at a major tourist and residential spot.  Who'd have thought? 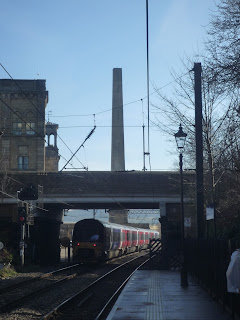 If Saltaire was on Merseyrail, there would be a suitable Attractive Local Feature board at the station.  Some urchins larking around in front of the Institute - something like that.  West Yorkshire Metro and Northern Rail are considerably less ambitious. 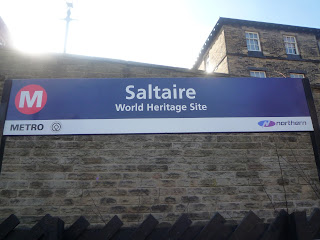 Hardly worth bothering with.

It was a charming, inspirational village, Saltaire.  I'd have loved to have lingered a little longer.  But I had more stations to collect... 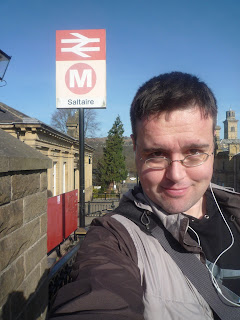 Point of order: the 333s were not "designed for Heathrow Express". They were designed for the West Yorkshire electrified lines. They just happen to have a similar bodyshell and electrical equipment to the Heathrow Express trains, which were built around the same time.

Before the 333s arrived, the service was provided by elderly slam-door trains cascaded from Network South East, which had an unfortunate problem with exploding transformers.

Shipley's Diana memorial is hardly trying - have you seen this statue?

It was designed to be the centrepiece of Walsall's newly rebuilt bus station, although it has now been moved elsewhere.

sorry, here is the link

Robert: Thanks. I really don't care, but thanks.

Gavin: I'm not sure if Diana would be happy to be the centrepiece of Walsall bus station anyway...