The Victorians were wonderful railway builders.  Thanks to their innovation, investment and passion, we have a network of routes we still use today.

The Victorians were also bloody awful railway builders.  Their commitment to free, unfettered, commercial development left a legacy of stubs, stations in the wrong place, and just plain odd bits of track.  One of the most infuriating parts of this legacy is city centres with multiple stations that don't link up.

Each railway company built its own terminus, usually in a shameless attempt to overshadow its rival down the road, and we're dealing with the after effects in 2013.  Manchester has Victoria and Piccadilly on opposite sides of the city centre.  The lines at Warrington cross over one another, but there isn't a station there, for easy interchange; instead there's Bank Quay in one part of town and Central in another.  Blackpool has North and South stations staring at one another from opposite ends of the front without actually connecting.  And of course, the centre of London is surrounded by a ring of stations with no link between them all.  The separate termini on the Euston Road are so close you could buy a Whopper at Euston Burger King and still burn your mouth on it by the time you've walked to your Kings Cross train.

Grouping, and then nationalisation, of the railways saw the services slimmed down and combined.  Liverpool pioneered this with the Link.  Exchange station was closed, and the local services were sent underground through a new tunnel that passed under the city centre to Central.  It only took 100 years to connect services from the north and the south.  In the meantime, long distance services were all sent into Lime Street rather than being spread around the city centre, and the Loop passed underneath the station to link it further.

Interlinking routes are starting to spread now, only thirty years after Liverpool did it.  There's Crossrail in London, of course, which will enable you to board a train at Heathrow and pass right under the City to the East End in a single journey.  Crossrail 2 will do the same thing from north to south.  In Glasgow, a proposal for a crossrail would have connected Queen Street and Central so that you wouldn't have to board a shuttle bus to change trains.  After the failure of the Picc-Vic scheme in the seventies, Manchester finally got the Metrolink to link its two termini, and the Ordsall Chord will add a new level of connectivity to the city.

One city that's left with two stations and no connection between them is Bradford.  It's quite simple to get a train from Forster Square to Interchange.  There's a direct route from Forster Square to Leeds every half hour, and it only takes 23 minutes.  You then change platforms at Leeds and get a different train towards Bradford Interchange.  These are even more frequent, running about every fifteen minutes, and it takes about 21 minutes to get there.  All told, with the wind behind you and a decent lick of speed across Leeds station concourse, you could probably do the whole thing in less than an hour. 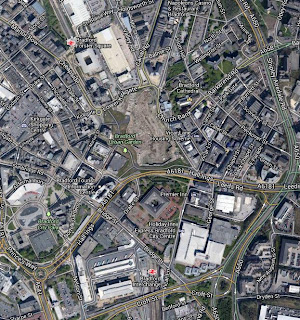 Or, you know, you could just walk. 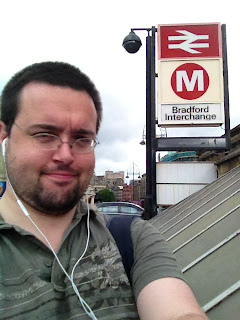 It's what I did on my visit.  I got off the train at the slightly underwhelming Bradford Interchange station and had a bit of a poke around.  The station underlined Bradford's runt status next to its larger neighbour, Leeds; while the railway station there is an epic, exciting mass of glass and steel, Interchange has four platforms and is a bit of a dump. 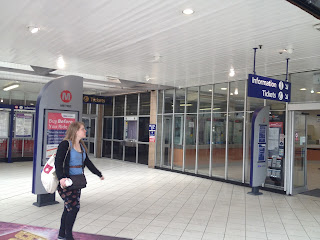 It's not awful by any means, but it doesn't encourage lingering.  The station's more of a place to pass through than to enjoy.  The presence of a key cutting/shoe repair shop gives you a clue to its down-at-heel status.  You never get a key cutting stall in a high-class joint. 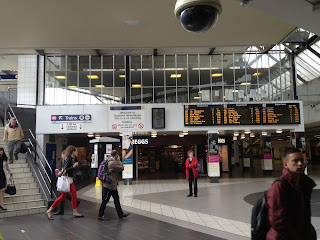 It is well integrated with the bus station, though, giving the city one of those hubs that most places talk about but never build.  It's just uninspiring as a whole.

Far better is the view once you leave the station.  You exit at the back of the City Hall, and it's a Victorian Gothic confection with an impressive municipal square in front of it.  Turrets and gargoyles and arches, oh my. 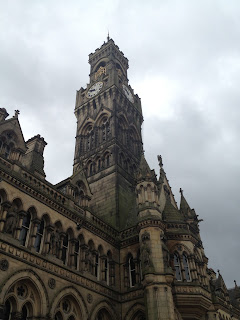 Sadly I couldn't visit the famous mirror pool as the square was still fenced off.  It had just hosted BBC Three's Bollywood Carmen and they were still disassembling the grandstands.  I'd only caught a brief moment of it on Sunday; Chelsee Healey and the hairdresser from Audrey's Salon were rushing Priya from EastEnders across the square.  I wasn't enraptured.  It looked like another of those programmes BBC Three does so it can shout "public service remit!" when people point out they've just made the eighteenth series of Sex Sun and Suspicious Parents. 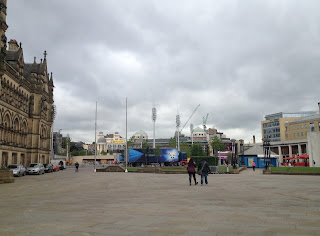 I darted down a side alley into the pedestrianised centre.  I'd only been to Bradford once before, a long time ago, to visit what is now the National Media Museum.  I'd not visited the city centre and I was impressed by it.  From the outside you have a perception of Bradford; it's rarely in the news for good reasons.  I'd expected the city centre to have been thoroughly done over by the Luftwaffe and 1960s planners, but it was attractive, thriving, inspiring.  They were good 19th century mercantile buildings, offices and banking halls, shops and cafes. 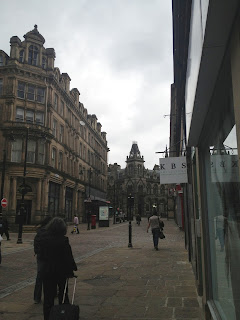 It was still a bit early for the streets to be throbbing but there were a few shoppers and office workers making their way about.  I walked past the unfortunately named Hustlergate (which is apparently named after a family called Hustler - yeah, of course it was) and out onto Market Street. 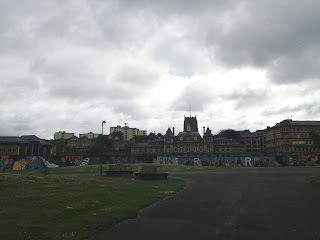 This was the "Bradford Urban Garden", which is a fancy way of saying "waste ground with some benches on it".  There used to be shops and offices here but they were bought and demolished by Westfield to make way for a new mall - "The Broadway".  With the downturn in the economy, Westfield pulled out their workers and did... nothing.  They left the site to rot.  Only after some negotiation with the local council did they they agree that this massive expanse of city centre land could be, temporarily, opened to the public, but signs make clear they're really not that happy about it: 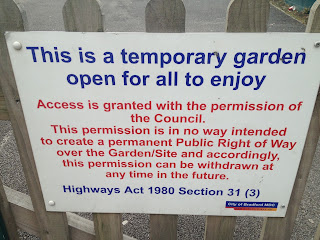 It's a bit like when you go round to someone's house, and they say "make yourself at home", and then insist you take your shoes off and that you sit in a particular seat and that you don't get crumbs on the carpet.

The frustrating part of this big empty bit of ground is it's exactly in the right place for a rail link.  The traditional reason why you couldn't connect Forster Square station to Interchange and, therefore, allow services to pass from the north to the south without stopping, was it would cost too much to build.  There were too many buildings in the way to be demolished, too many landowners to negotiate with.  Not any more!  There's one landowner and one big long bit of empty ground, but nothing's happened.

The local rail user group wants Bradford Crossrail, obviously.  Businesses want it.  Metro isn't keen, though, and Network Rail definitely can't be bothered with it.  Less than half a mile of track that could massively improve the city's transportation facilities.  Turning a train around takes time - it's far easier to have the train pass through the busiest parts (the city centre) and do the turnaround in some nice quiet station at the end of the line.  In the city centre you want trains to pass through, always onwards, depositing one load of passengers and collecting another load.  Instead Bradford is left with two unconnected dead ends and a big hole in the ground.  It would be nice to think we'd learnt from the Victorians' mistakes, but at least they built the odd railway. 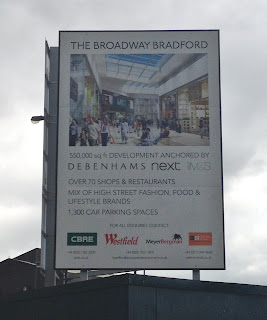 I followed the signs for Forster Square station.  I wonder if "Bradford: City of Film" will still be a UNESCO World Creative City if the National Media Museum is closed, as has been proposed?  Presumably it'll have the title taken away from it, because losing an internationally important museum isn't enough - you really need to rub salt into the wounds.  I expect the Science Museum will probably sell the Media Museum site to developers so they can build some nice flats on it, flats they'll probably name after famous British film directors to emphasise its heritage.  No-one will want to live in them because the North will be a cultural desert by then but the Americans will still have somewhere to take the kids on a day trip in London, so that's alright then. 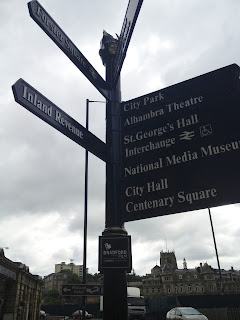 Forster Square used to be a lot more impressive, but it was cut back a few years ago.  Now the station building is wedged behind office blocks, with a retail park to the side, and accessed via a windswept plaza.  A tiny Eastern European woman played an accordion as I walked between two thrusting pieces of modern art.  I'm sure they symbolised "progress" or "inspiration" or "forward thinking", but to me, they just looked like bits of that Kryptonite city that bursts out of the Atlantic at the end of Superman Returns. 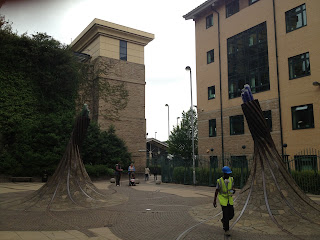 The station building is clean and modern, and has a ticket office staffed by real human beings, which is always good to see.  And electrified lines mean the station is served by those sexy West Yorkshire Metro trains that positively gleam with efficiency and glamour.  It just felt perfunctory.  The name of the little kiosk in the station building just added to that "this'll do" feel: 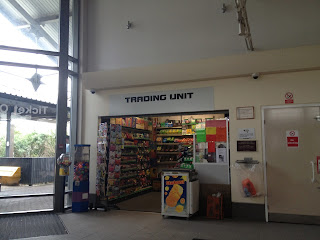 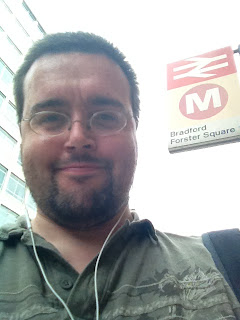