The works at Hooton have finally come to a halt, and this somewhat remote, outlying station has a new look. Hooton's always suffered from being important as an interchange, but lying in the middle of nowhere: in addition, it's in Cheshire, but comes under Merseytravel, for reasons I've never fully understood.

As a result it's been a bit unloved and abandoned. Finally, various agencies have got together and the station's received a great injection of cash and development, and it's become a station worth the name.

It's not just the MtoGo shop and public toilets, though those help with the new feel. It's amazing how much brighter and friendlier the MtoGo makes the station - the white and yellow decor combined with the open till (no hiding behind three inches of glass here) is a real boon. And Merseyrail should be applauded for putting toilets in their stations at a time when everyone else is closing them down. 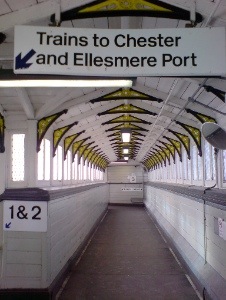 The major work has been on a brand new footbridge. Because of the station's layout, every rail user had to use a footbridge to access the trains. It was built out of wood, and had no access for the disabled whatsoever, meaning that the mobility impaired or people with prams and bikes would have a major struggle on their hands. In addition, it was cold and wet, with frequent drips coming through the ceiling. 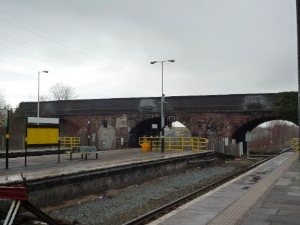 Those white marks on the road bridge are the only sign it was ever there. Instead, at the opposite end of the platform, a defiantly 21st century footbridge has risen in its place. 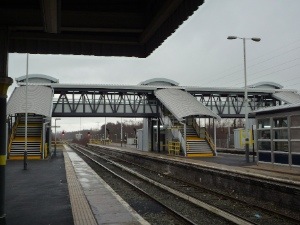 Confident and a little brash, the new footbridge is a bit out of place to me: it wouldn't look out of place at Eastham Rake, up the line, but the Victorian station building clashes with it. Perhaps it's just the shock of the new.

Certainly it's hard to argue that the facilities aren't an improvement. 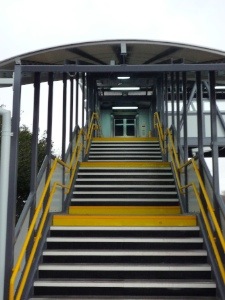 Wide open, brightly coloured steps (the Colour Tsars have been right in on this scheme from the start) leading up to a broad bridge with a easily cared-for floor. The platforms are signposted in the new grey and yellow Merseyrail house style. 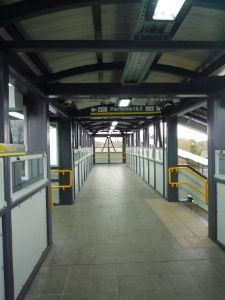 Of course, the biggest improvement is the provision of lifts to all the platforms, making Hooton fully accessible for everyone for the first time. 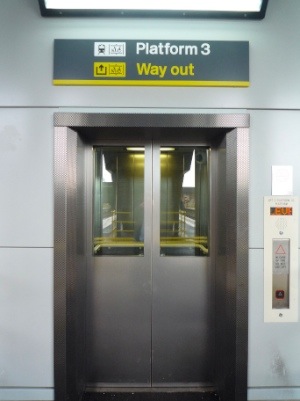 I'm not keen on the open bridge and staircase, meaning that rain and wind can get inside. Hooton is surrounded by fields and an open car park, and the wind can be pretty brutal. It's also the place where broken down trains are likely to be stabled, and passengers forced to wait for an interchange - over the years I've been forced to wait on the platform for a replacement train when my Chester service has given up the ghost. In these circumstances, the platform rapidly fills up. Yes, there are waiting rooms on each platform, but when three cars of commuters have been deposited, they'll soon be a sardine tin.

On the old footbridge, people tended to move onto the steps to shield themselves from the elements. That's no longer possible, as the gaps in the sides mean you'll be buffeted anyway. Plus I can't help thinking that the nice shiny floor will rapidly become slippery in a November rain storm. 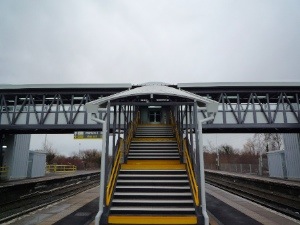 That's a minor niggle, though: the footbridge is so much better than what was there before.

In addition, a cycle store has been built, and in a first, I could actually see bikes in it. These green cages have appeared all along the Wirral Line but they always seem to be forlornly empty: Hooton bucks the trend. Though it seems that some people are still too cheap to pay the deposit for the key, and have just tied their bike up outside. 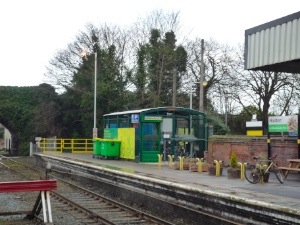 Bravo to everyone involved in the new look Hooton - Merseyrail, Merseytravel, Network Rail and the Department of Transport. It feels like a rejuvenated destination. (And bravo for them keeping the ALF, and not chucking it in a skip once it was rebuilt - I'm looking at you, Southport).

One final complaint: there's a sign commemorating the opening of the bridge. 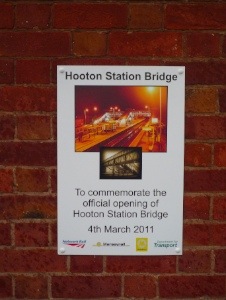 Couldn't they scrape together a local celebrity to do the honours? I'm sure Dean "Jimmy Corkhill" Sullivan would have done it. Or one of the Hollyoaks. Pete Price probably would have paid his own train fare. Bear it in mind for next time, Merseytravel.

They should have got you to open it ;)

The steps make for a cool New Order/Joy Division Factory records type image (see above, though thats The Bache), glad for the much needed investment, keep up the good work with your blog :-)

The station is managed by Merseytravel because the station is only served by Merseyrail. Cheshire don't have an equivalent PTE and it wouldn't make much sense for another rail company, like Northern Rail to manage it.

But Capenhurst, Bache, Little Sutton and Overpool are also only served by Merseyrail, but they're covered by Cheshire West and Chester (Cheshire County Council as was) and are not included in Merseytravel. That's why there's no yellow and grey M on the station signs, and why they aren't in the "yellow" on the map.

For some reason, Hooton is over the border in Cheshire, but is counted as Merseyside.

When they electrified Merseyrail to Hooton 'the powers that be' decided it would make more sense for it to be a Merseytravel supported station, as the catchment area is Merseyside. For once common sense prevailed. Thatho Heath on the City Line is the same. You will note however that they pay for the station staff, but not the car park, unlike all other stations on Merseyside. The other stations on Merseyrail 'proper' have no Merseyside catchment.