There are over five hundred stations on the Northern Rail map.  That's a lot.

And I've just been nibbling at it.  Last trip out: four stations.  I go all the way to Gainsborough, and get... four stations.  So far I've done about a quarter of the map.  It'll take forever.

I decided that I needed to do some serious, hardcore tarting.  A constant rush of stations I could fold away.

I picked Doncaster as a centre almost at random.  There were plenty of places that are equally busy, with services in and out, but Doncaster had the advantage of being in South Yorkshire.  I hadn't been there yet.  I'd got right up to the border on the Penistone Line (still nothing funny about that name) but hadn't crossed over. 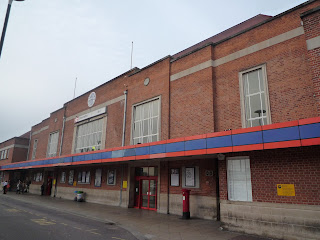 Most large city railway termini are Victorian, thrown up during the boom years, but Doncaster was rebuilt in the 1930s.  It's got a definite whiff of Poirot about it, with the stepped roof at the long awning; it's all a bit provincial Odeon.  I wouldn't have been surprised to see posters for Casablanca and How Green Was My Valley instead of plugs for the Young Person's Railcard.  Sadly, any residual glamour has been destroyed by years of neglect, not helped by the entrance now being surrounded by a bunch of yellow-fingered smokers, getting in one last gasp before their train. 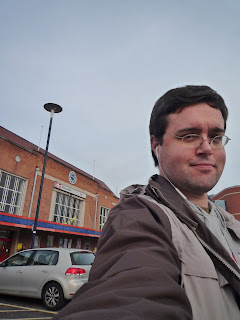 It was difficult to get the station sign, but trust me, it's there.

Normally I'd have a bit of an exploration of the town, but today, ahead of my blitzing, I didn't have time for that.  Sorry Doncaster; I'm sure you're lovely really.  I was tempted by the Fishergate Shopping Centre, which promised it was the home of The Greatest Shops In The World (quite a claim for a building that looked like two oversized biscuit tins welded together), but instead I went back inside and bought a Daytripper ticket.  "You can't use that until the 9:42 train," the ticket woman snapped; I chose not to point out that there were two services before that I could use it on.  I just glowed smugly instead.

The entrance hall of the station continues with the pre-war glamour as yellow globes spiral down from the ceiling.  The openness of the space has been destroyed by a modern intervention: two 21st Century lift shafts that totally ruin the flow of the building.  They create pinch points, narrowing the crowds, and though they've been decorated as sympathetically as possible, they're just out of place.  It's a shame but a necessary evil if there's going to be access for all. 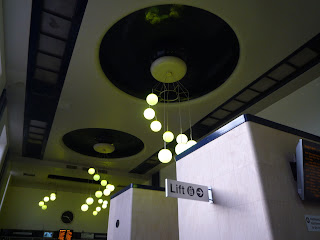 I went down into the subway, past the plaque dedicated to a couple of railway union firebrands (ironically put there by the National Express franchisees), and back up onto the platform for a coffee from the Costa stand.  It's a busy, thriving station; trains stop frequently, churning out passengers and leaving again before you get too attached.  Later on, when I passed through the station, I noticed the huge phalanx of trainspotters loitering at the end of platform 3, a sure sign that it's a throbbing hotbed of hardcore engine action. 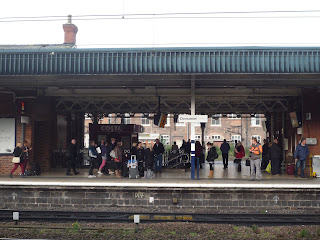 It was too early for them now, though.  It was that buffer zone between people with jobs leaving and people wanting a day out arriving; the suits were mixed in with cardigans and woolly hats.

Can I take a moment to moan?  I don't approve of corporate sponsorship of railway signs.  I'm not talking about ALFs, of course, pointing you in the direction of tourist attractions.  I don't mean "Aintree for Aintree Racecourse" signs either, because those are helpful to travellers.  I mean this kind of thing: 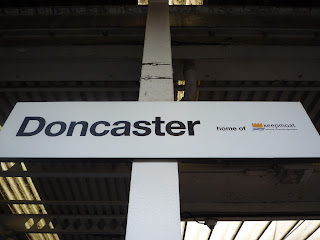 Who gives a shit, really?  Who gives a single monkey's toss that Doncaster is home to a housebuilding firm?  All we want to know when we look out the train window is "what station is this?"; we're not interested in anything else.  For a piddling sum, though, you can annoy literally thousands of people who will squint at your logo and say "what the hell is that?  Doncaster's home to what?  Is that a football team?"  All it succeeds in doing is making life just a little bit crappier.

I went into the waiting room to finish my coffee before the train arrived.  It's been tastefully renovated and was clean and bright.  I was pleased to see a woman in there clutching a Liverpool Biennial guide; I wanted to go over and congratulate her on her excellent artistic taste. 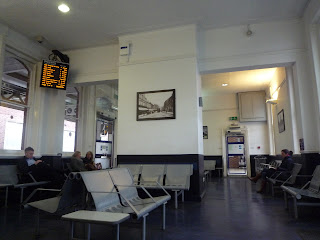 The coffee was a mistake, and I soon had to dash off for a pee.  On the way I passed a plaque commemorating Doncaster's victory as Large Station of the Year 2000, 2008 & 2009.  It's ok, I thought, but it's not that good.  It's clean and it's efficient and it's well maintained, but aren't all stations meant to be like that?  Isn't that the norm, not the exception?

On the plus side, it does still have a Journeys Friend, the apostrophe-shy chain of 1970s-ish newsagents that used to be ubiquitous on the railways before they were replaced by something less disco.  In fact it's got two - a shop and a kiosk.  A positive embarrassment of missing punctuation marks. 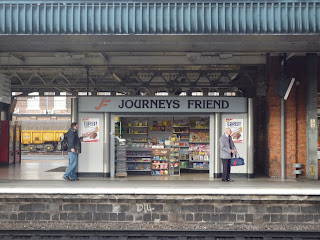 It's not bad, Doncaster.  Not bad.  But it wasn't enough to keep me behind.  I had plenty of places to go...