He'd look like David Bowie, if David Bowie didn't have that pet donkey that eats all the old off him.  Blonde hair and photochromic glasses and cheekbones you could slice cheese on.  He sat opposite an enthusiastic younger man, who practically claps with delight as he reaches into his Tesco Bag for Life.

Bowie pulls out a small metal cube.  It's penetrated by circular hollows, so you can see all the way through it, plus screw holes in each corner.  It looks a bit like a Cenobite puzzle cube that's been opened up.  He also pulls out a three legged device, like an upside down bar stool, about a foot tall and with coloured wires dangling down.

From a pocket - perhaps? - he pulls out a ball bearing and drops it into the cube.  It falls into the top hollow and sits there, gently rocking with the train, hovering in place.  "We have to be careful," says Bowie.  "This [he points at the other device] is generating a magnetic field as well."  He pulls out a velvet box, like a jewel case; inside is another cube, identical to the one on the table, and he slots it neatly over the top of the other one so the ball bearing is held inside.

And then we arrived at my station, and I had to get off, doomed to forever wonder if he was an agent of Quantum assembling a doomsday device on the 09:51 to Goole. 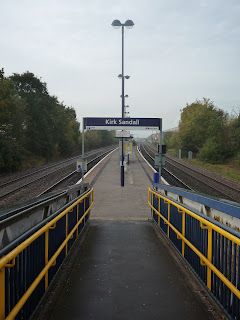 Kirk Sandall feels lonelier than it is.  The island platform, the lengthy ramps, the surrounding trees, somehow conspire to make it isolated and cold.  The other people alighting was a tight group of students, who seems to band together, silently, until they were safely away from the station.

I'd been quite pleased by the modern, clean Travel South Yorkshire logo, a slanty T that appears on the side of some of the trains.  It turns out that this is just the "front facing" logo, one invented in 2006 as part of a PR exercise to unify all the services together.  The older logo still lingers on in places - like here, outside Kirk Sandall station, a logo that personifies the forward thinking and excitement of a Ted Heath government. 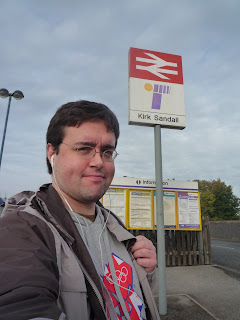 I think if you licked that sign it would taste of Aztec bar.

The village was much nicer; a thoroughly middle-class enclave.  Plastic crates of recycling were neatly left on the kerb.  Dog walkers with swinging bags of turd hanging from their wrist.  Old ladies with tartan shopping trollies.  It was just nice, inoffensive, and yes, a bit dull. 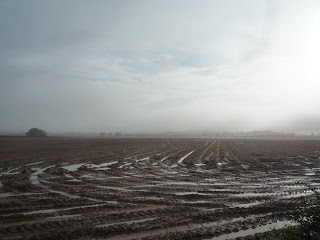 The morning mist still hadn't burnt off.  It swaddled the fields and the trees, obscuring the horizon.  The footpath faded away and soon I was walking on dewy grass, the bottom of my trousers turning dark with moisture.  The verge was rough and unkempt.  I picked my way anxiously through patches of stinging nettles, until finally I turned a corner and I was on a main road, with a proper footpath again.

I'd been up since 5am.  The rutted earth under my feet had made me tired again, and I'd only just started.  Perhaps doing the whole of the North was overambitious. 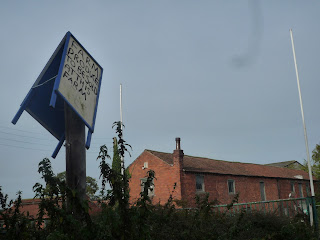 Dunsville is not, perhaps, the most glamorous of names.  It's like they decided this town was the end of the line and that was it.  It certainly didn't snag me.  A long Broadway had been built by ambitious town planners, perhaps to remind us of boulevards or avenues, but it had been lined with small, grim semis.  The pavement was patchy where verges had been paved over - 21st century parking requirements mean that grass and trees are fripperies.  They cost too much for the Council to maintain, anyway.

I crossed over Sheep Dip Lane, past the Broadway pub, which was advertising its family Hallowe'en fun day.  The houses were getting refurbished here, covered in scaffolding, with builders attaching polystyrene to the outside as insulation.  Not all the houses though: just the ones the Housing Associations ran, meaning that people who'd exercised their right to buy stood out.  They were pretty easy to spot anyway, as most had invested in a different coloured paint for their pebble dash, or a more elaborate front door, or a porch, but I should imagine there were still a few put out homeowners.  "We've got a mortgage and negative equity and patio doors but the tenants next door are the ones who are getting the insulation!  Broken Britain!"  If I lived in one of the rented houses I'd start walking round the house without any clothes on, just to underline how toasty warm I now was. 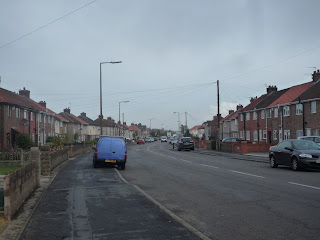 The station continues the theme of unfortunate naming - Hatfield and Stainforth.  It's difficult to find - if you didn't know it was there, or realise that you was on "Station Road", you'd have no idea.  It's down a side street, with no sign outside, just a couple of timetable boards that were half-covered by bushes.  You walk down a badly paved road to the bright orange station building which is, of course, long closed up.

You can't miss the stairs, though.  Purple and yellow, a complex of steel panels and tubes that rises up too high and stretches too far.  There are six tracks at this point, with the passenger services just using two in the middle, allowing freight to pass either side.  A few industrial services passed while I waited with unfamiliar names pasted on the side - GBRf, VolkerRail, EWS.  A massive Freightliner train passed, brown trailers looking like rusted Darth Vader helmets. 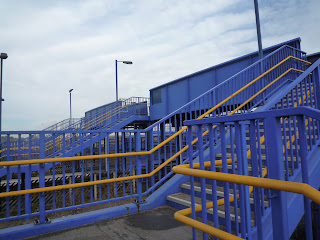 I clanked across to the northbound platform, the only person to be heading that way, in search of a decent sign.  For the first time in ages, I was going to have to settle for one on the platform.  Not the same. 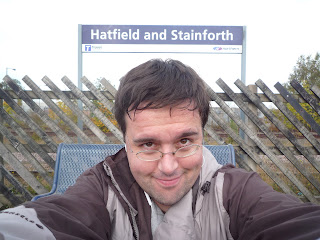 I took up a seat in the shelter and watched the opposite platform fill up.  There was a party who looked like a stag do: four middle aged blokes, bruisers, two wearing t-shirts that say Mac's Final: THIS IS IT.  With them was a teenage boy, probably from Mac's first marriage, who didn't really know how to talk to these raucous, filthy, excitable men; I imagine them slipping him ciders later in the evening until he pukes behind a chair somewhere.

I'm joined in the shelter by another passenger.  He's skinny, wired, full of nervous energy.  He's hopped up on something, and I'm guessing it's not the e-numbers in his Um Bongo.  He starts rolling his own in the shelter, bouncing it on his thigh, but he steps outside to smoke it.  I suddenly felt nervous, nakedly aware of a couple of hundred quid's worth of iPod, iPhone and camera in my pockets. 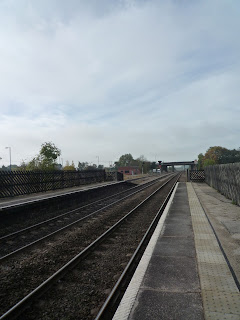 The train arrived and, unsurprisingly, my fellow passenger headed straight for the toilet and stayed there as the ticket collector did her rounds.  We both got off at Thorne North, and he made a dash for the exit, while I lingered. 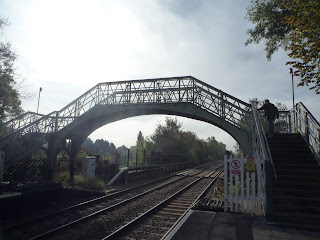 It was the kind of station you wanted to linger in.  The delicate ironwork bridge over the tracks, the flowers in the planters, a small Victorian station building.  Even more pleasing, it was a working station building; staffed, cleaned, modernised. 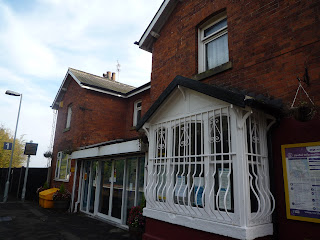 I was delighted to see it.  A proper ticket office.  Lovely. 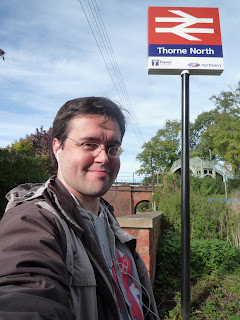 Thorne was lovely too.  Directly opposite the station was a fishing lake which gleamed like a freshly polished sapphire in the Autumn sun.  The homes I passed weren't tiny Council boxes, but were instead Victorian manses set back from the road behind automatic gates.  Trees shaded the nameplates on the front steps, because none of them had something as gauche as a number; they were all Rose Cottage and Ivy House and Lavender Hall. 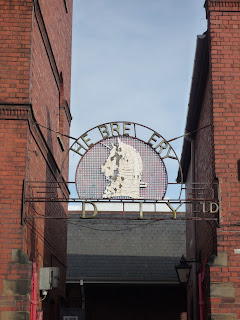 It was a rich, pretty little town.  Not perfect, of course.  The tall tower of a brewery caught your eye, but on closer inspection, I discovered that it was long closed.  A carpet showroom had moved in, but even that looked on its last legs.  Fulton Foods (Famous for Value) was there too, its blue and yellow shop front somehow making Farmfoods look tasteful and refined.  The Town Council had tried to make "The Green" look like a French town square, with thin trees providing shade over metal seating, and they'd succeeded in part; there was a man sitting there reading his newspaper.  It was hard to ignore the public toilets right next to it though, and the loading area for the shops.

The pedestrianised shopping street was full of charm, thronged with butchers and bakers, smelling strongly of pastry and bread.  The little coffee shops were packed - I gave up hope of stopping off for a cup of tea and a slice of cake when I realised the queues were right up to the doors. 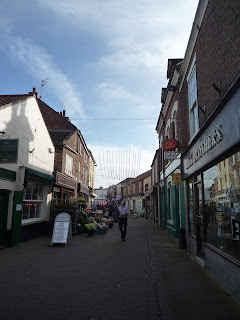 I could have dashed through the town and made it to Thorne South station in time for an earlier train.  I didn't want to though.  I'm thoroughly middle class.  I like little market towns instead of rough backstreets.  I apologise if that makes me a bit dull, but I can't help it.  I was thoroughly pleased to come across a traditional town square, with a pub that had been there for nearly three hundred years.  I had to celebrate it. 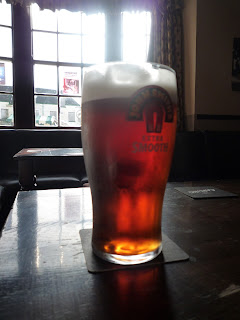 The bar maid called me "love", which is always a bit weird when she's younger than me.  It feels a bit creepy.  There was free wi-fi though, which she was using to watch the iPlayer on her netbook.  It was a simple, old fashioned boozer - they hadn't gussied it up with old books bought in bulk or brass sextants or a "theme".  Comfortable chairs and tables, a little stage in the corner, an old man counting out his small change onto the bar. 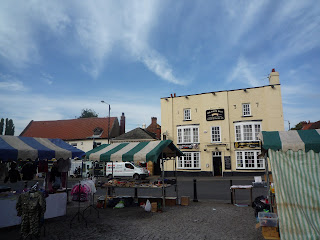 Lunchtime pints always go to my head, so I tripped out of the pub towards the station.  I had a bit of a giddy grin, not helped by Skyfall coming on my iPod (you ARE going to see it, aren't you?  That's an instruction).  There was a bit of road with no traffic and an empty park, and I'm afraid to say I had a bit of a singalong as I walked.  If you heard me, residents of Thorne, I can only apologise. 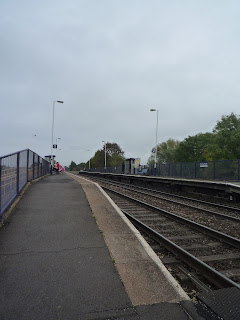 Thorne South is very much the ugly sister of the two stations.  There aren't any pot plants here, just some benches and a couple of shelters.  They haven't even got a footbridge; you have to cross the tracks.  Some men from Network Rail were there, examining the state of the platform, and they attracted the attentions of the girl in the jeggings next to me.  "We could do wi' a ticket office here," she said commandingly.

"There's not enough room for a bench, never mind a ticket office," he replied.  "Besides, an honest person always buys their ticket on the train."

I sat on the bench, quietly sobering up, watching a donkey chew on the grass in the neighbouring field. It was peaceful, calming.  Just nice. 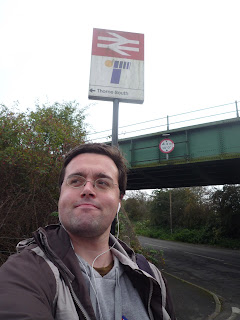 This is fantastic and I'm enjoying it.