What can you do with Liverpool Central?  It's the hub of the Merseyrail network, the centrepiece, but it's in desperate need of help.  The 19th Century by way of the 1970s station is bursting at the seams.  Last month's announcement of £20 million and a four month closure will go some way to alleviating the pain, but how far will it go? 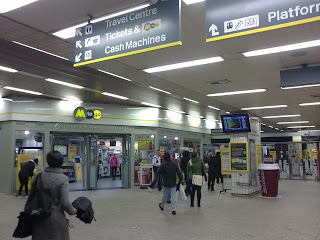 I happened to be in town today so I headed there to have a look round before the refurb starts (being a Wirralite, I rarely stay on the train all the way to Central unless I'm heading for Bold Street).  The MtoGo has made a massive difference to the ticket hall.  It's a lot brighter and more welcoming, and the white tiled floor helps.  This is where the majority of the money's going.  A new glass roof is coming in, along with "improved toilet facilities" and "improved passenger flows".  The Central Village scheme (currently being constructed behind the old Lewis') will see escalators inserted to the left of the MtoGo, leading up to an intermediate concourse on the roof and then more escalators up to the new shopping district (you can see it on the video here).  There will reportedly be more Walrus-ready passenger gates put in as well.

All well and good.  But I can't say I'm not disappointed.  The problem isn't with the concourse; it's down below on the Northern Line. 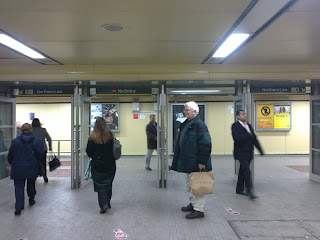 The Northern Line platforms predate the Link & Loop; in fact, they predate an awful lot of railways, full stop.  The island platform was opened in 1892 as the terminus of the Wirral Railway from Birkenhead via James Street.  When redevelopment came in the mid-Seventies, the Wirral Line was sent deeper to a brand new platform on the loop, while the old Wirral platforms became the new Northern Line. 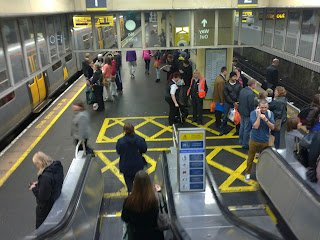 Head down the escalators and, despite the usual cigarette-smoke coloured cladding, you're aware you're in a completely different station to the Wirral Line one.  Island platforms are a rarity in UK underground stations (the London Underground only has two, left over from the earliest days of Tube building) and it feels narrow and restricted.

And look at those crowds.  I was there at the tail end of the rush hour, and the train on the left was just departing, but look at how full the platform on the right is.

The escalator banks occupy much of the centre of the platform, and so there's little space either side for waiting passengers.  It results in a "bunching" effect at either end and then, when the train comes in, a squeeze to get aboard.  The signs showing where the doors are help a little, but it's far from ideal. 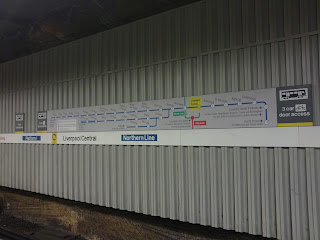 Network Rail plans on removing some of the escalator machinery to give people more room to circulate.  That would help but it's a bit of a sticking plaster, like their decision to remove some of the seating units a few years ago.

The basic problem is that the Northern Line platforms just aren't fit for purpose any more.  Using the old island platform when the Link was built probably saved an awful lot of money, but it just created more problems years later.

That twenty million sounds like a lot but what's really needed is a more drastic plan.  My trip to the Glasgow Subway showed one solution.  The whole circle was built with tiny island platforms in all the stations.  At busy locations like Hillhead (below), they've built a second platform, across from the first.  The old island platform becomes one way only, and a glass wall is installed to stop people from plummeting onto the tracks. 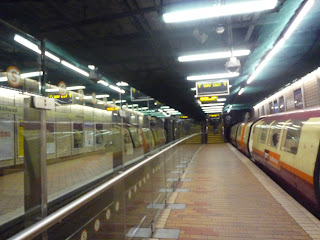 Bash through the wall at the top of the Northern Line escalators, build a bridge over the track, and put in a new platform with escalator and lift access there.  You've just doubled the station's capacity.

Yes, it'd cost a bomb, but it's got to happen eventually.  The alternative - which Network Rail consider might be necessary in the future - is to build a whole new station, probably underneath the Church Street/Ranelagh Street junction.  Which would cost even more of a bomb.

There's still some smaller schemes that I think could be implemented to improve life for Central's users.  At some point in the rebuild forty years ago, some jobsworth realised they could save a few quid by only putting in three escalators, even though there was space for four. 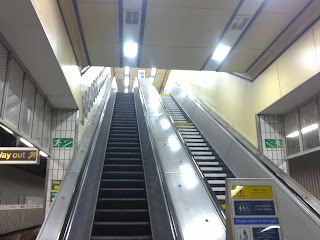 Well done; you saved a little bit of money.  Can we replace that staircase with an escalator now?  Because I think that might help the passengers a bit by getting them to and from the platform a lot quicker.

Another way to lighten the passenger load would be to send more trains to Hunts Cross.  At the moment, in a typical fifteen minute period, there are three northbound trains and one southbound.  If, say, the Kirkby train continued on instead of terminating, you'd double the amount of trains to Hunts Cross - and halve the number of people waiting on the platform.  (As a bonus, you'd get twice as many trains serving the busy Liverpool South Parkway).

Next year's refurb will put in another lift; can I suggest it's a large one, so you can fit more than one person with a bike or a pushchair in it at a time?  Perhaps big enough for half a dozen people at once?  And if you could build it in a place that means people won't get rained on when they reach ticket hall level, that would be a good idea as well.

These are just a couple of idea; I'm sure you've got some of your own, and please feel free to use the comments to tell me what they are.  I think we can all agree that Central needs help.  Any money coming its way is of course appreciated.  I'm afraid that £20 million just isn't enough.

P.S.  I also noticed that Central's acquired a new bit of artwork on the floor, which looks a lot like a Grant Searl piece for the Animate the Underground series. 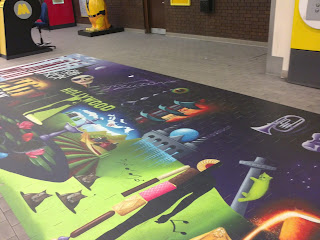 Firstly: on the floor?  Really?  Secondly, has this all been announced and unveiled and I missed it, or is it still being laid (I couldn't find this painting's riddle, which makes me wonder if it's a work in progress)?  Thirdly, how much of it's going to be left after the refurbishment works?
Posted by Scott Willison at 19:41

Doubling to Hunts Cross won't work because there aren't enough paths once you've taken the Allerton Curve into account. Terminating the second one at LPY could work (if they had enough train sets) but I'm not too sure how much it would solve as *most* people know train times and only go for the southbound train around the time they know it's due.

One solution is to employ full-time dispatch staff to force people to spread out on the platform, particularly when 6-car units are in use - it would be boring for them, yes, but it would spread people out better and safer.

Another is to improve signage (and use other awareness-raising techniques) to let people know about the direct access to the Wirral Line platform - in the throng for the escalators there's always a fair few people planning to go 'up and over' who don't need to clog the main exit. On-board announcements could be altered to reflect this, for example.

This could be the last opportunity to excavate and enlarge the Northern Line platforms, as the Central Village development will probably prevent such work once it is completed. How much does it cost to dig a hole these days? Probably more than £20M.

"There's still some smaller schemes that I think could be implemented to improve life for Central's users. At some point in the rebuild forty years ago, some jobsworth realised they could save a few quid by only putting in three escalators, even though there was space for four."

No, they didnt - there were four. One was removed when I was a kid (must have been about 1985 or so, as I *only just* remember it) for those who didn't like using the escalators.