Round and Back Again

Instead, I took a different route: to the south.

I know, I know.  "It's not on the Merseyrail map!  It's not a Merseyrail service!  You are totally ignoring your blog's entire brief, and I for one will not stand for it!  Consider your RSS feed deleted!"

You're right.  There was no reason for me to do it apart from: it was there.  The sheer enjoyment of knowing that I had visited every single station on that loop.  That gives me a sense of achievement, a bit of pride, a smidgeon of pleasure.  Sorry about that. 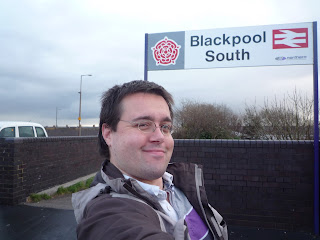 I started at Blackpool South, first thing in the morning.  The BF dropped me off in the car (once again, his devotion to me doesn't extend to four mile hikes through the countryside) and I wandered down to the platform.

It was a hell of a shock.  The mainline routes all go into Blackpool North now, so the only service that runs into South is the hourly train to Colne.  Still, it's a major destination, so I expected something a bit better than... that. 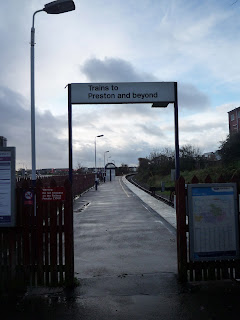 One platform.  One track.  One bus shelter.  That's your lot.

There used to be more services, of course, and more platforms: four in fact.  Even without the benefit of Wikipedia, it's easy to see the remains.  A car park next door takes up a strangely tapered piece of land, and the abandoned edge of the island platform can still be seen. 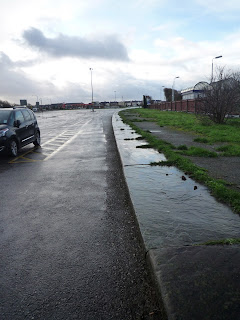 The train took only a couple of minutes to get us to Blackpool Pleasure Beach, which was a bit of an improvement.  It had a roof at least.  Surprisingly, the station's only been here since 1987; it's right in the shadow of the Big One. 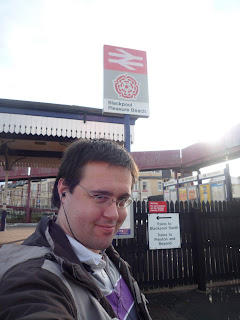 Again, it was unstaffed, which seemed doubly unusual considering it must get a lot of traffic in summer.

I headed for the seafront.  I'd thought about getting a tram from the Pleasure Beach down to Squires Gate, but the improvement works mean that part of the line is closed at the moment.  It was a bit disappointing, but understandable.  Instead, I went up onto the sea wall, and followed it south. 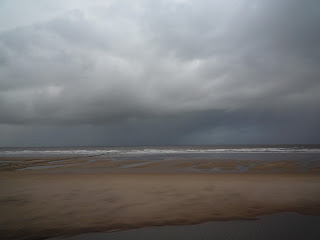 It was 10 am on an October Wednesday, so unsurprisingly, I had the front more or less to myself.  A couple rollerbladed past me at one point, holding hands.  Ahead, an elderly couple battled against the wind to get their morning constitutional.

Dotted along the parade were artworks which screamed "European Union regeneration fund"; huge hulks of angular metal and concrete, some of them with benches inside to hide from the rain.  I wasn't impressed until I came across the giant glitterball, because, let's face it, that's just fabulous. 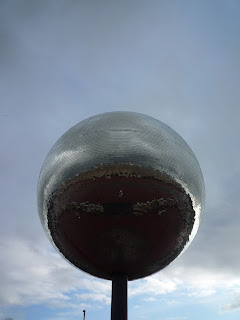 The weather Gods were watching me.  I was at the point where the commercial activity on the Golden Mile had stopped and turned into flats, where the cafes and bars had disappeared.  I was halfway between stations.  And lo! the heavens opened, and a rainstorm that even Noah would have thought was over the top started.

It was like stepping into a hurricane.  Icy points of water thrashed my face and body; the backs of my legs were soaked in seconds.  Thankfully the wind was blowing in my direction, catching me from behind and pushing me on.

I stopped for a minute to take a picture of the newly built tram depot, and the camera was nearly whisked out of my hand. 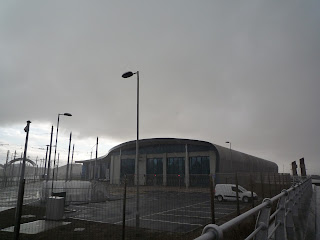 That photo is actually in colour; I know it looks black and white.

All of this would have been a bit depressing, if my iPod hadn't taken pity on me.  It randomly shuffled up Bad Romance.  It is a truth universally acknowledged that it is impossible to be unhappy when you hear Bad Romance; in fact, it almost put a spring in my step.  I used the tempest as a suitable cover so I could sing along, shouting "ra-ra-ra-ah-ah; roma, roma-ma, gaga-ooh-la-la" into the rainstorm. 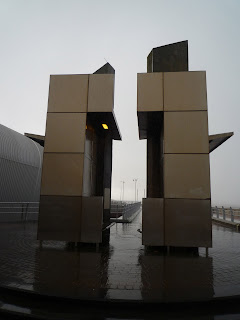 There was one last piece of artwork before the promenade ended; as I rounded it, I found that the hand-holding rollerbladers were hidden inside, trying to hide from the squall.  I trudged through the wet sand down to the roadside, and spotted salvation: the Dunes cafe, a little greasy spoon in a parade of shops opposite Squires Gate station.  I practically ran inside to order a tea.

"Do you want that in a plastic cup so you can sit outside, love?" joked the mumsy woman behind the counter. 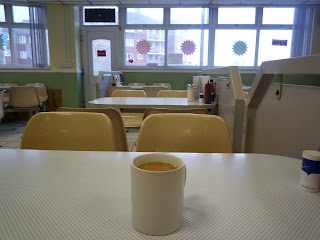 There were plastic seats bolted to the chipboard table.  The walls were covered in Blackpool FC memorabilia, including a signed shirt.  A board advertised the £2.50 fried breakfast, and the smell of eggs and fried bread filled the cafe.  It was homely, simple, unpretentious.  I hugged my mug of tea and let its warmth take me over.

The squall had finished by the time my mug was empty.  I crossed the road to Squires Gate station, buried under a road bridge. 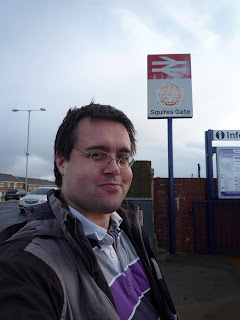 Remember how tiny little Garston used to be the station for Liverpool (not John Lennon) Airport?  How international travellers were advised to disembark there and get a bus to the terminal?  Squires Gate is Blackpool's equivalent though, sadly, it's even more pathetic. 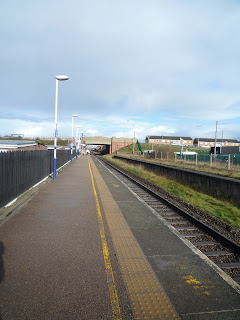 In between the garages for a housing estate and some industrial units, it's one platform, no ticket office. None the less, "alight here for Blackpool International Airport". 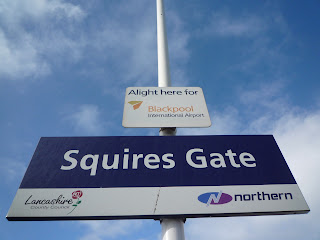 There's been mutterings about changing the station's name to simply Blackpool Airport; I hope not.  I like Squires Gate.  I'd like it even more if there was an apostrophe.

The train took us south through some dunes and, though I didn't realise it, through about fourteen social classes.  By the time I got off at St Anne's-By-The-Sea the cheap and cheerful world of Blackpool was firmly behind me.  St Anne's had a station building, a taxi concourse, trees. 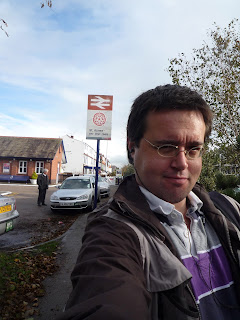 This town was truly middle-class; it was the Margo Leadbetter of conurbations.  I walked down the high street and felt like I was lowering the tone with my still damp walking trousers and my backpack.  There were planters and metal street furniture along the avenue, with local department stores and boutiques.  I saw a Caffe Nero, a chain which for some reason hasn't bothered turning up in Blackpool, and there wasn't a hint of a fast food establishment; just small, local restaurants. 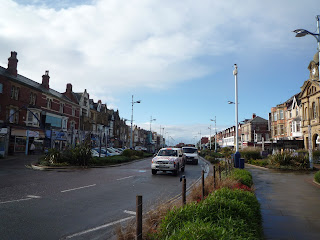 I decided not to risk the seafront, since I'd ended up half drowned last time I walked that way, and instead turned inland for the road south.  It was a wide main road, elegantly spaced and lined with hefty Victorian villas.  Most of them still seemed to be homes too, though there were the inevitable discreet bell pushes indicating a conversion to apartments, and a few nursing homes.  The driveways were peppered with the upper middle class marques; Audi, BMW, Lexus.  The odd Mini for a runaround.  A sign pointed to the Royal Lytham St Annes Golf Course and I realised we were in British Open territory; of course there was going to be cash splashed around.

The street names were obsequious in the extreme.  Obviously, there was a Victoria Road, because let's face it, there always is.  As I worked my way towards Ansdell though, I realised that the planners seemed to have gone through every possible Royalist permutation.  York.  Queens.  Sandringham.  Balmoral.  Even as the houses got a bit newer, King Edward Avenue and Queen Mary Drive turned up.  Apartment blocks were called "Queens Court" or "Windsor House".  God knows what it must have been like when William and Kate were married; you probably couldn't walk five yards without catching on bunting.

The road was dead straight, which meant my eye was caught by a distant feature.  I had no idea what it was: just a tower, backlit against the sun.  Its silhouette seemed completely out of place amongst the subtle grandeur of the houses.  As I got closer I began to think: is it a mosque?  The tower looked remarkably like a minaret, and there seemed to be the hint of a dome behind.  Somehow I couldn't see the residents of St Anne's taking well to the idea of a large Islamic centre in their midst, and this looked really big. 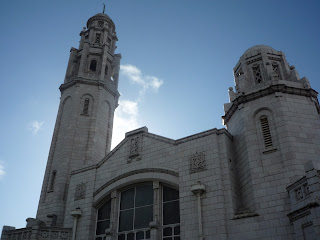 Finally I got up close, and saw a beautiful white church.  The rain had scrubbed it, making the tiles shine in the sun.  It was a fantastic building, completely unexpected amongst its slightly predictable neighbours.  The effect was only slightly spoiled by a large tarpaulin advertising Zumba classes on a Tuesday night hanging across the entrance. 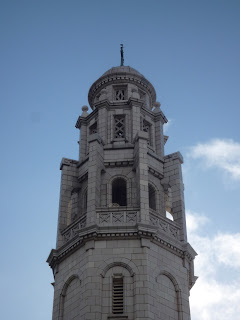 I doubled back so that I could get to Ansdell & Fairhaven station.  At the foot of Woodlands Road was an example of early transport integration: a specially restored shelter, allowing interchange between the trains and the trams.  It had been restored by the local historical society, and inside was a little display on the history of trams in the area. 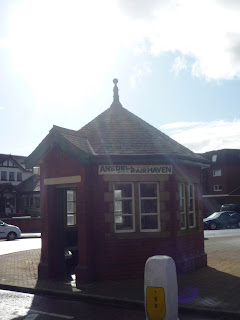 Hopefully one day Blackpool's new shiny tram network can be extended south, and the tram shelter can be useful again.

Ansdell & Fairhaven station was the same as the rest of the line.  One platform and one track.  The size of the bridge behind the platform showed how large it must have once been; three arches, two of which are now useless. 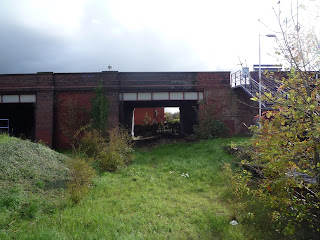 Still, I was halfway round the Blackpool loop.  None of the stations were exactly inspiring so far, but the important thing was that I'd collected them.  Four to go... 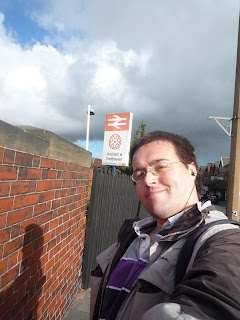