The excellent diamond geezer has a regular feature on his blog where he highlights the shameless attempts PR companies have made to get him to plug their stuff.  I get a few e-mails like that myself, though there's one key difference between me and him: I have no shame.

Don't get me wrong - the integrity (?) of this blog is very important to me.  You won't find me peddling corporate crap for nothing.  However, if they offer me free stuff, I may reconsider.

Where this is leading is that I got an e-mail from Sally at Cheshire West & Chester Council.  Readers might remember her cameo as the Nice Lady on the Jazz Train trip a few months ago.  Sally's the Mid-Cheshire Community Rail Partnership Officer, and was letting me know that they were launching a new Rail Walks guide.  Did I want to come to the launch?

followed by buffet lunch in the Greyhound pub in Ashley at approx 12.30 – free booklet thrown in! 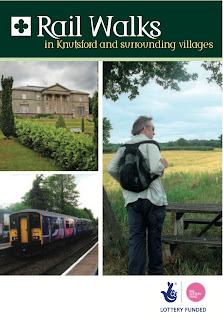 Even as I boarded the train to Ashley, I started getting tense.  I'm way, way too shy, and the idea of going to an event where I knew no-one was starting to scare me.  What would I say?  Who would I talk to?

As the train headed from Chester through the countryside, things got worse.  I began to sweat.  My head started spinning.  My breathing became shallow.  I knew what was happening: I had a panic attack coming.

I couldn't do it.  I couldn't face it.  Just the idea of being at that station, talking, existing, trying to make conversation - it all got a bit much.  The train pulled into Greenbank, and I jumped off.  I couldn't handle it.  I stood on the platform and sucked in lungfulls of air while the train took off behind me.  Big buckets of oxygen as I wrestled with my anxiety and shook.

Good grief I can be pathetic sometimes.

So unfortunately, I didn't get to the launch - which is a shame, because it looks brilliant.  The booklet for the rail walks can be downloaded here, and it's a great idea - I'm surprised it's not more common.  It encourages tourism in the countryside, it gets more users onto public transport, and it gives a purpose to those remote stations that might be overlooked.  I must get back out there and try one out.

Anyway, the one good thing about having my hissy fit at Greenbank was I could walk to Hartford station on the West Coast Main Line for a train straight back to Lime Street.  Hartford seemed very pretty - very moneyed Cheshire, lots of green lawns and discreet buildings.  The station was on a high street with a Co-Op, a pub and a church; it was so typically English it could have been in a Miss Marple.  A good Marple, not a rubbish ITV one. 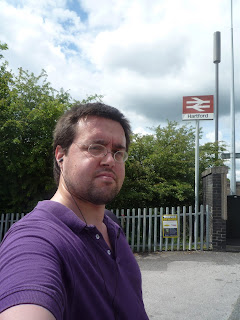 It meant I was able to cross another station off the map, which was something at least.  A small crumb of comfort from the embarrassment of the day.  I headed down to the platform to wait for the train, which gave me plenty of time to look at one of the ugliest station buildings in Christendom. 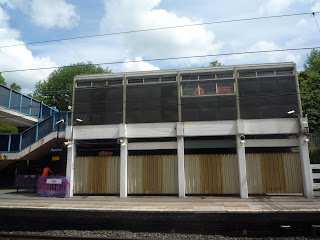 British Rail's architects in the Sixties were just lazy, weren't they?  I bet they just drew a box on their plans and said "that'll do" before heading to the pub.  I suppose we should be thankful that it was at least staffed, though I feel sorry for the poor sod inside who has to spend his day selling tickets from a public toilet.

If anyone else wants to send me free stuff or invite me to shindigs, go ahead.  I'll try to turn up this time...
Posted by Scott Willison at 21:09

You should write a book of Rail Walks yourself and kick it off with Greenbank to Hartford.

(and don't forget to let me know when the launch is...)

Or how about a guide to Rambling Around the Todmorden Curve?

I'm not going to invite you to a launch, diamond geezer, so you can humiliate me on your blog!

Rice Lane to Walton would be a great one. Or Port Sunlight to Bebington. I'm sure I could pad that out to 50,000 words...