Before I headed off on my tour of North Wales (and by the way: thank you for all your comments - it's really appreciated),
there was an important international event: Eurovision.
Don't look at me like that.
As is usual, it was a night for snacks, booze and borderline racist comments.  Joining in the fun was Jamie, who arrived
bearing gifts.  Always a sign of a good guest.
The gifts were courtesy of his partner Chris, a.k.a The Golden Voice of Merseyrail, fresh from his stint doing the
announcements at Aintree during the races.  Top of the list came those magical items: MERSEYRAIL FLIP FLOPS! 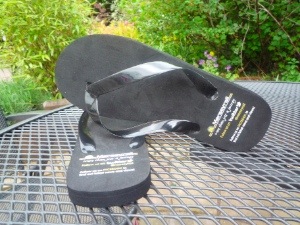 This season, the flip flops are coming in black: minimalist and subtle.  The perfectly elegant accompaniment to any outfit.
There's also a little ad for Merseyrail's Facebook page too.  I'd be curious to know how many of the glamorous ladies
attending the races immediately ran home and Liked that page; I'm guessing the numbers ran as high as zero. 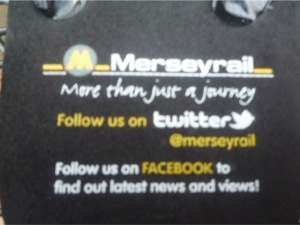 There were also a few postcards.  You might remember that I love the new Art on the Network poster, the Art Deco blue
one.  The postcards have been produced to promote the competition, and are little marvels.  First we have the blue railway one: 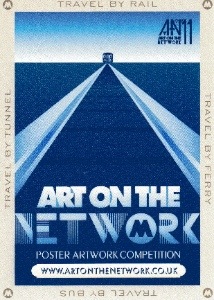 I love that so much.  In fact, I even e-mailed Merseytravel and asked if they had prints of it for sale.  I never got a
reply but I maintain they could make a tidy sum flogging those in the MtoGo shops and the Travel Centres.
Anyway.  The second image, in the same style, is themed around the ferries: 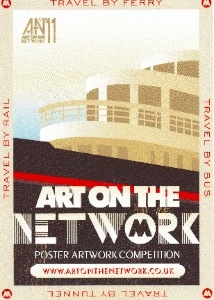 Love.  It.  You can't tell me that the Ferry Terminal shop wouldn't be able to shift a few prints of that? 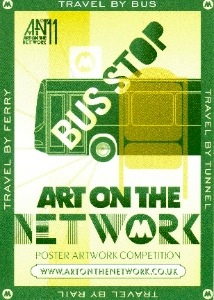 The bus one is less successful.  I like the green but I'm not sure it gels in the same way the other two do.  It's still pretty
gorgeous though.
They're really great.  Many many thanks to Jamie and Chris for the pressies, and many thanks to Merseytravel for
producing them.  Budding artists: don't forget you can still enter the Art on the Network competition here.
As for Eurovision, at least we weren't humiliated this year.  The winner was pretty unmemorable though; I couldn't
remember which one it was until they played it again at the end.  Ah well.  Next year in Baku...
Posted by Scott Willison at 19:24

Email ThisBlogThis!Share to TwitterShare to FacebookShare to Pinterest
Labels: Art on the Network, Jamie and Chris, Merseyrail, Merseystuff, Merseytravel

The posters are lovely, this is true. In fact, is there any way to vote for them as winners for the competition?

The green on the bus poster looks almost identical to the colour favoured by Liverpool Corporation, and subsequently the Liverpool division of Merseyside PTE, for their buses. I hope someone deliberately chose it, but if not, it's still a nice coincidence.

In case you weren't aware the UK came fifth in the televoting but came something like third last with the juries resulting in our slightly disappointing 11th place. We did at least do better in the televoting that Jedward who bizarrely were loved by the juries.

Just done a Google search for 'Merseyrail flip flops' and disappointingly this blog is only in 6th place. Admittedly the page that comes up was one of your funniest blog posts ever.

Sadly all my Google hits have vanished since I went to my own domain. I used to be on the first page of results for Merseyrail! *sigh*