Pardon me boy - is that the Chattanooga Choo-Choo? (No).

You could say I have eclectic musical tastes. How else do you describe someone whose last three CD purchases were REM's Collapse Into Me, the Supergirl soundtrack, and a four disc compilation called A Complete Introduction to Disco? (Apart from saying, boy, his musical taste is awful).

I dip in and out of music. There are some artists who I'd crawl over hot coals for - Blur, Madonna, Dame Kylie of Erinsborough. I like film soundtracks (unsurprisingly I have all the Bond CDs). I like trashy pop. I like 90s Britpop. And I like jazz, in a sort of wishy washy way. I don't have time for the more experimental jazz stuff, the music that sounds like someone tied a vacuum cleaner on "blow" to the end of a saxophone and recorded the results. I like the old-fashioned, mellow jazz, your Ella Fitzgeralds, your Billie Hollidays, your Louis Armstrongs. I was probably the only thirteen year old boy in the world to get Harry Connick Jr's We Are In Love for Christmas.

True jazz aficionados are, even now, turning up their nose at my taste, and sneering that it's not proper jazz. You're probably right.

Anyway, it meant that when I got a comment on one of my posts, telling me about a "Music Train" on the Mid-Cheshire Line, my interest was piqued. It piqued even more when I saw that it was a regular Northern Rail service, except with a jazz band playing live on board for the passengers.

I took along my friend Andrew for the ride: 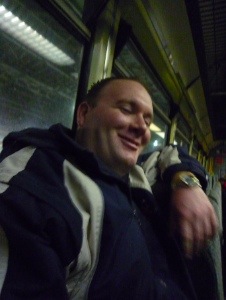 ...and also the Bf. I should mention at this point that the Bf despises jazz. His typical reaction when Harry Connick Jr comes on is "what the hell is this shite?" and "this must be the most depressing music ever". That's when I play some of Harry's "crooner" tracks - when I put on something more avant-garde like Star Turtle he practically breaks the sound barrier in his run to turn it off. However, he decided to come along for the ride anyway. Probably just so he could make snippy remarks and roll his eyes a lot. 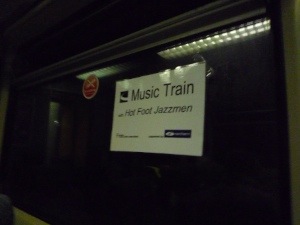 There's no charge for the music. As I say, it was just the regular 19:07 service from Chester to Manchester Piccadilly. All it cost us was the train fare. We climbed on board and positioned ourselves halfway down the carriage. It was filling up with various enthusiastic looking men and women. Scattered in amongst them were people who quite clearly hadn't realised that there was going to be entertainment; in fact, one woman leapt up in a panic, saying, "Is this not the Manchester train?"
The Hot Foot Jazzmen were two middle aged men, one with a clarinet, and one with a guitar. They both sported voluminous facial hair, which I believe is a requirement of the Musician's Union for all jazz bands.
Before we departed, a nice lady approached us and asked if we were there for the music train. She was from the Mid-Cheshire Community Rail Partnership, and was handing out freebies. Long-term readers will know I have never turned down something for nothing, which is why I am now the proud owner of an MCCRP bookmark. 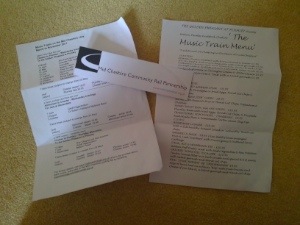 The nice lady (whose name I never got - sorry!)* said, "Are you from that blog? You're the Tart?"

Shame washed over me as I admitted, yes, I was the one from that blog. Turned out the Chairman of the Mid-Cheshire Rail Users Association had spotted what I'd written about Northwich and Knutsford a few weeks ago, and had written a very nice blog post with a link. The nice lady said some complimentary things, and I tried to crawl into the back of the seat, and then she walked away and I could recover. 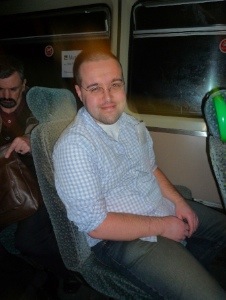 We were off, and almost immediately the two guys started playing. This is normally the point where I'd post a bunch of pictures taken on the route, but unfortunately we were on a Pacer. I hate Pacers so much. The net result was that we were shaking, shuddering, and stammering every inch of the way, meaning all my photos came out looking like this: 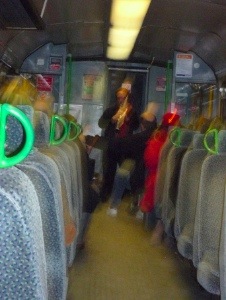 Great for avant-garde arts projects; not so great as a representation of an event**. I did however manage to grab a video of them performing Alexander's Ragtime Band, right up until the point some scallies got on at Northwich and plonked themselves right in front of me:

Still, it was nice while it lasted. The Hot Footmen played some real classics - Hello Dolly, Bill Bailey Won't You Please Come Home, When The Saints Go Marching In - good, reliable tunes that got the train clapping along and singing. When You're Smiling in particular went down a bomb. The two men played and sang, alternating performances, and were thoroughly impressive. The fact that they managed to be note-perfect while the Pacer did its best to throw them to the floor was an achievement in itself. Not everyone was amused - one commuter moved to the other carriage looking distinctly annoyed, the miserable old sod - but it was a really nice feeling to be there, in a carriage full of camaraderie and joy. Even the anti-jazz Bf started clapping and singing too. It turned out he was enjoying himself. It's true what they say: the rhythm is gonna get you.

The train stopped at Plumley and we all piled out and headed for the Golden Pheasant pub and restaurant. I really didn't think I'd be back in Plumley quite so soon. Thanks to menus handed out on board, Andrew had been able to phone our order ahead, and soon we were tucking into pate garlic mushrooms (for starters) and freshly cooked fish and chips or gammon (for mains) - gorgeous, with enormous portions; my fish was so big it overflowed onto a second plate. It was way too much for me, in fact. The Hot Foot Jazzmen also disembarked to continue their set in the pub, though we weren't in that half: Andrew and the Bf detected a football match on the TV, and gravitated towards that.

I was of course thrilled by this. Still, there were compensations: 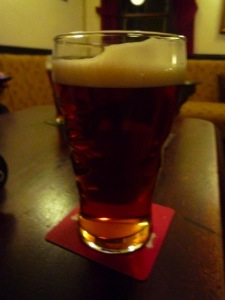 If you think that pint glass looks a bit odd, it's because it has indentations for your fingers and thumb. I'm not sure if they just thought I looked clumsy and needed the extra help or what.

Because we're lightweights who don't get out much, we sloped off home early. The music continued on a return train at ten o'clock, but we were all a bit tired, so we disappeared for the train at nine.

It was a great evening none the less. You can't beat the killer combination of a train, good music, good food, and a pint of bitter or two. The full schedule for the Music Trains can be found here: the next one's on the 13th April, and ties in with the Chester Folk Festival. The Bf is a big fan of folk music (and yet I stay with him!) so he's already planning our trip on that one. There are also a few afternoon trains, and also trips in the reverse direction, for an evening of jazz at Alexander's in Chester.

Do go along, if you can. It's a brilliant innovation, you get to go out into the country to a nice pub, and it costs you nothing - what's not to like?

*Thanks to an e-mail from Harry, the secretary at the MCRUA, I can confirm that the Nice Lady was in fact Sally Buttifant, the Mid-Cheshire Community Rail Officer. Kudos to you Sally!

**Andrew is a better photographer and supplied me with this photo, in which you can fully appreciate the magnificence of the Jazzmen's facial hair: 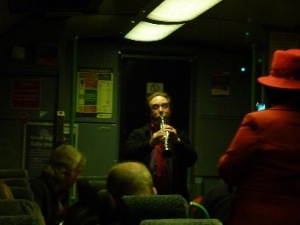 Good music on a terrible train. What a conflict of interests!

Nice idea. It would be good to see them do this sort of thing on some quieter routes, advertise it well and let people know that train services actually run on those lines (glares at Ellesmere Port-Helsby).

It's a Pacer, but at least it was an ex-Arriva Trains Northern unit with the comfy seats. You could have been squashed into a horrible Merseytravel refurb.

Those scallies would have set alarm bells ringing for me. I wouldn't have been able to enjoy the music, I would have been nervously watching them for the rest of the trip, expecting them to happy slap me or something.

Looks like a lot of fun anyway. I would suggest Merseyrail do something similar, but they hardly need to encourage extra passengers at the moment.