One of my biggest fears on this trip was inadvertently insulting the Welsh. I don't mean by wheeling out tedious sheep gags or referencing Tom Jones. I don't even mean winding them up as I used to with my friend Debbie, by telling her that Wales shouldn't have a football team because "it's not a real country".

It was down to the language. I didn't want to say the wrong word, or mispronounce it, and accidentally call people a wanker. My default option was to use the English name - Valley, not Y Fali, and Holyhead instead of Caergyle. Sometimes however, the Welsh frustrated me by having no English equivalent.

My next stop - a request station - was called Ty-Croes. Eh?

In the end I chickened out and said to the guard, "Can you stop at the next station, please?" 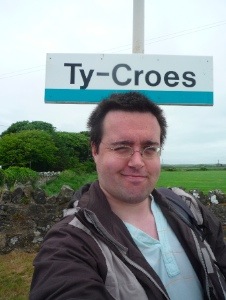 Ty-Croes was a proper, old school, country station. Nothing but fields around but there was still a tiny halt with an old fashioned station building. Of course, it was closed and boarded up, but you can't have everything. 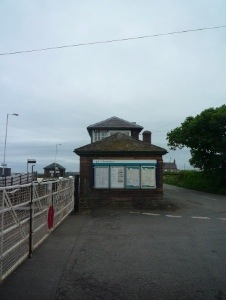 Here's a fact about the human body - if you sweat a lot, you get dehydrated. You get thirsty and tired.

I'd been sweating all morning. My new anorak, bought specially for the trip, turned out to be one of those plastic cocoons that turns into a sweat box with the slightest moment of exertion. I'd been trudging up and down hills and dunes, clambering over fences, jumping across puddles. And my current round of antidepressants cause ridiculous amounts of sweating as a side effect. (Plus, let's be honest: I'm carrying a few more pounds than I should).

As I left Ty-Croes, I was still recovering from the dash for Rhosneigr. The flask of tea had momentarily satiated me, but now, as I started following the country lanes for my next station, I began to feel the thirst. I was tired and dry. 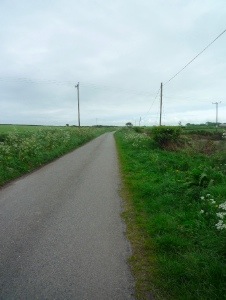 I'd not travelled far on the train, but without the noise of the jets overhead, it felt like a completely different world. The landscape was flat and deserted. Fields of green pasture. I was walking on the country roads but there was no traffic, none at all. I ended up strolling down the middle of the roads - Highway Code be damned. Sometimes a mud-splattered car would roll past, no doubt ferrying a farmer or worker from one field to another, but they were a moment of noise in a sea of calm. 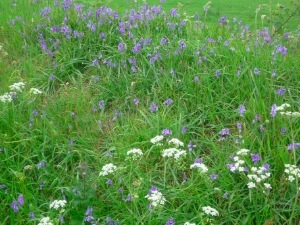 My OS map had various settlements marked on them, but they were at best hamlets, and at worse, just a single farmhouse. My dream of finding a village store for a bottle of Coke (or better, a pretty little pub) seemed just that: an unfulfilled dream. 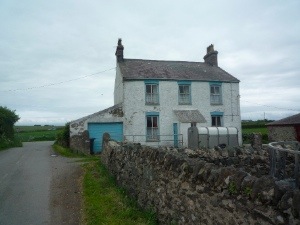 Worse, I had the railway line within sight the whole time. It was a constant reminder of where I was headed, but in the worst way possible. While it takes a straight, direct route across the island, the roads I was following twisted closer, then away. At one point I was taken close enough to see the tracks, then the road turned left, and it receded into the distance. A couple more turns, and there it was again. I saw the steps running up the embankment, and I really had to resist the temptation to clamber up and simply walk along the sleepers to the next station. Instead I passed under the bridge in search of another pathway. 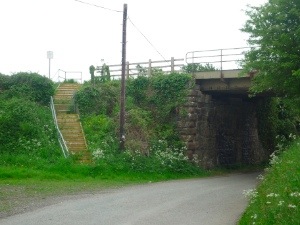 Nope - there was a sign, old and bare. And buried under all those thorns and leaves was a stile, covered up and abandoned. Clearly the farmer here wasn't keen on people passing over his land. 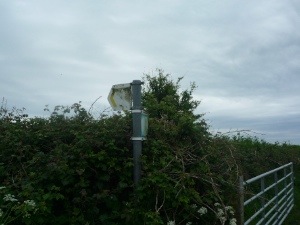 Well, tough. Somewhere on the other side of that field was a potential drink for me, and nothing would stop me. I had an Ordnance Survey map on my side. So with weary limbs I pulled myself over the fence - having a moment of panic when it wobbled under my weight - and then splashed into the thick mud on the other side. Nice.

On it went. The path wasn't a path, just muddy rivulets beside the hedge. I even had to scramble through a ford - a full on stream crossing my way. (Come on - how hard is it to stick a couple of planks down as a bridge?). I eventually ended up in the farmyard, squeezing past a truck parked in the centre of my way, and all the time cursing the farmer. My great-uncles had a farm, so I have a lot of sympathy for them, but the sheer obnoxiousness of this particular landowner towards people who had a right to be there made me hope he went bust and his farm was turned into a holiday home. 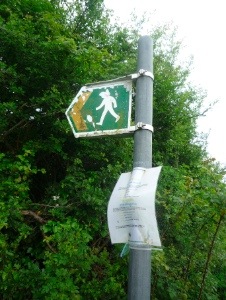 I was thirsty, tired and riled up now, and things weren't going to get any better. I crossed a lane for another path, this time with a sign from the Welsh Environment Agency. It seemed that my fantasy of a lazy stroll by a lake was to be ruined by an infestation of poisonous blue-green algae. I had no plans to dive in and swallow half the contents, but it's a blow to the image of a rural idyll.

Again, the path was barely there, grown over with thick long grass and nettles. I wondered how long it was since someone had come this way. I felt like Stanley in the jungle, thrusting my way through the undergrowth and hoping there was nothing nasty lurking below. Admittedly, I was more concerned about hidden bogs, not poisonous creatures, but it's the principle that counts. 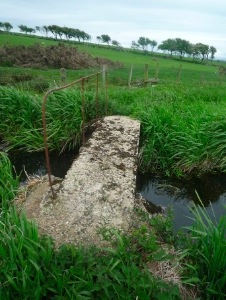 That bridge, incidentally, is the winner of the 2011 Prize for Most Useless Handrail. It was rusty, thin, and wobbled the minute I touched it: I thought it best to just risk it and do without.

I stopped for a moment in a field to check my map and take a breath. The sweat was still pouring off me, and now I was desperate to get to the next station. I just felt so exhausted. In retrospect, I probably should have done some exercise - any exercise - before deciding to embark on a ten mile hike. The longest I had walked in the weeks immediately prior was from Sainsbury's car park to the store.

At least I was closing in on the railway again. As I crossed a field, the Holyhead bound train passed by. It was like a joyous portent: when that train made its way back this way, I'd be on it. 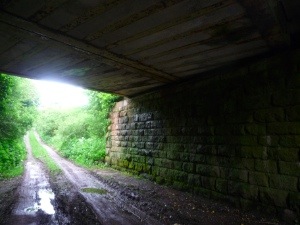 I'd hoped that Bodorgan station might have some shops nearby. I wasn't exactly expecting an MtoGo, but it was a train station - that's a centre for people right? There were houses, yes, but nothing remotely commerce related. No shops, no pubs, nothing. The station house, once again, was just another home. 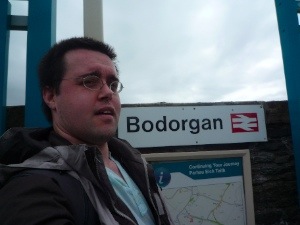 On the plus side, it had seats. I collapsed on the bench and peeled my anorak off. My t-shirt was soaked through; it still wouldn't be dry the next morning. I leaned back and let myself fall away. 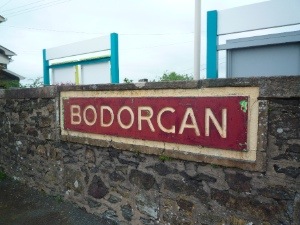 The train turned up half an hour later, by which point I was at least semi-human. Semi.

My next stop should have been the legendary Llanfairpwllgwyngyllgogerychwyrndrobwllllantysiliogogogoch, the final station on Anglesey before you cross to the mainland. But I was too tired. Sod it. I'd come back tomorrow. So I cruised past it and got off at Bangor, which seems to be in the middle of a major refurbishment, unfortunately. 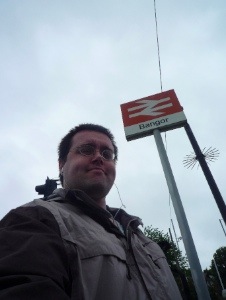 Even more unfortunately, it was built at the bottom of a hill, and my hotel was at the top. Whose idea was that? They need shooting. Finally I was checked in, and I dropped onto the bed with relief. And then I had the first of a dozen large mugs of water.

Ok the suspense is killing me now, what was your mistake at the end of day 2 part 1?