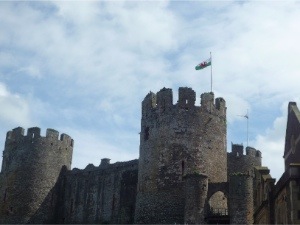 Edward I must be spinning in his tomb. Welsh flags over Conwy Castle? All those years of oppression for nothing.

I headed out of town. It's a sign of how difficult it is to cross the Conwy estuary that there are three bridges here, each one within a few feet of another: a Telford suspension bridge, a Stephenson railway bridge, and the main road bridge. The Telford and Stephenson bridges were both trial runs for their larger efforts over the Menai Strait - it was a nice bookend to the day. I was on the newest bridge, which is much quieter than when it was originally built. 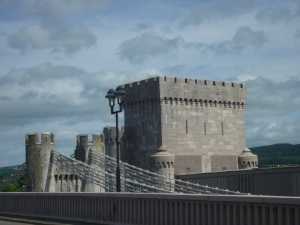 For a long time, traffic was forced through the tiny medieval streets of Conwy; anyone heading from the North to Holyhead would have had to compete with narrow, 13th century roads. It seems like a nightmare. Fortunately, in the late 80s, they finally decided to do something about it. 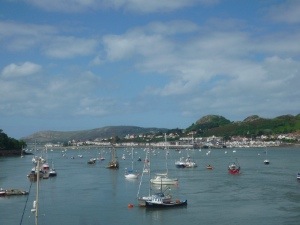 Running underneath those boats is the Conwy tunnel, a dual carriageway that bypasses the town completely. It was the first immersed tube tunnel in the UK - sections were floated out into the bay and then lowered into the riverbed. 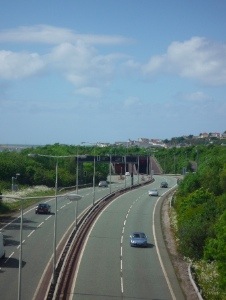 I know right now there are a whole load of railway people reading this who are rolling their eyes and skipping ahead, and fair enough. I'm not a trains vs roads person. The country needs good railways and good roads. There's far more romance in the railway - it's difficult to get misty eyed over a Vauxhall Astra - but the roads are a necessary, valuable part of the network. The tunnel under the bay is a brilliant feat of engineering, and I find it fascinating. If it were up to me there'd be road tunnels all over the place, sending motorways under city centres and everything. But that's going back to my deep seated Freudian tunnel issues, so let's not dwell, shall we? 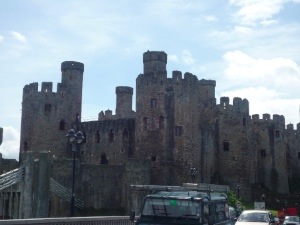 One last glimpse of Conwy Castle and then I was into the town of Llandudno Junction. After the scenery across the river it was a bit of a shock. Ugly industrial units. Messy road layouts. Fences everywhere. It was as though Conwy had deliberately farmed all its unattractive parts over here - the picture in its attic.

Also, for a town actually named after a railway station, they go out of their way to hide it. I expected it to be signposted as soon as I hit the bank, but no; I had to follow my instincts, trying to keep the railway line in sight and hoping I ended up outside it.

The path stopped suddenly, and forced me down some steps and into an underpass. They'd done that classic municipal trick of allowing graffiti artists to paint a mural on the inside, as a deterrent to further painting; personally I can't stand it. I know it gives young people something to do, deters crime, blah blah, but I'd prefer a nice brightly tiled tunnel when I'm skulking under a dual carriageway. The heavy purple of the paint, combined with the poor lighting, made it oppressive. It was all well done, and there was a nice cameo from the railway junction, but I still rushed through. 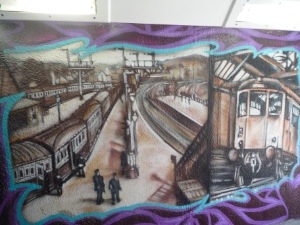 I finally found the station, entirely by luck, and I staked out a spot in the car park for the photo. Unfortunately my camera's lens wasn't wide enough - you'll have to imagine the final 'n' for yourselves: 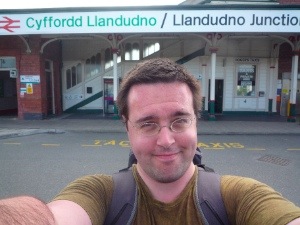 It was a strange little station. I was there for twenty minutes, and there was almost no activity whatsoever. No trains came through. Then, in a five minute period, we seemed to get about four hundred of the things. 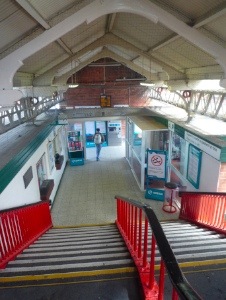 When I'd planned this trip, Llandudno had very much been on the agenda. I was going to take a train from here to Deganwy, next on the branch from Llandudno to Blaenau Ffestiniog, then walk to Llandudno itself so I could take a ride on the tramway. Then a regular train back to Colwyn Bay. My love in with the various towns of North Wales had put paid to that idea, though. It was pushing four o'clock; the tramway would almost certainly be closed by the time I got there. I decided to leave it for another trip, sometime. Maybe.

Instead I took a seat on the platform to wait for the Colwyn Bay train. There were a couple of teenagers further down, teasing a seagull with some Pringles. A group of pensioners arrived, and were dismayed to find that the coffee shop was closed; the man disappeared and returned with some Capri Suns from the Netto over the road. I put in my iPod to blot out their bleating. I was listening to Ian's superb album Come to Metro-land; the evocative lyrics and very British music were the perfect soundtrack for a peaceful train station platform.

And so to Colwyn Bay. 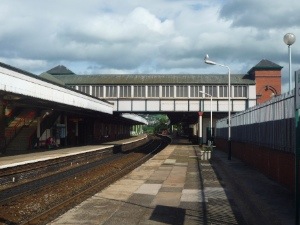 I had a minor frisson of excitement as I arrived on the platform. An ALF! Well, a semi-ALF. Tucked away at the far end of the platform was a Welcome to Colwyn Bay sign with a dragon on it. It's not really an Attractive Local Feature - not unless there really is a dragon with a magic wand somewhere in the town - but I'll take what I can get. 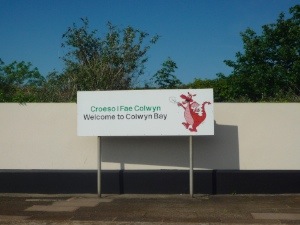 The station meshed Victoriana with Eighties red brick, not entirely successfully; while the lift shafts were necessary and unobtrusive, the octagonal customer services building with its mirrored glasses was too much. Too brassy and low class; Miami Vice in amongst Upstairs Downstairs. On the plus side, we had a working, staffed ticket office, and even ticket gates. Wow. I'd assumed that Arriva Trains Wales had given up on revenue protection as throwing good money after bad. What next, a pleasant, friendly member of staff? A clean train?

Ignoring the stares from the drivers in the taxi rank, I took the station pic: 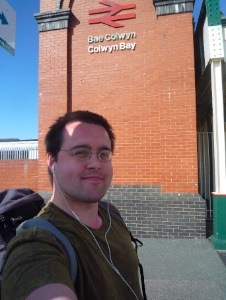 The town was pretty and busy. The shopping day was winding down, but the pedestrianised precinct was still thronged, and the shops looked well patronised. The WH Smiths, in particular, had a nice metal canopy with WHS formed in the ironwork. 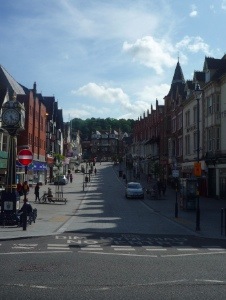 The Travelodge came with a surprise: The BF! He'd driven down to Colwyn Bay to meet me, and to take me out for a dinner. This was a wonderful treat, not least because the town's culinary options seemed limited - if you didn't want KFC or a kebab, you would be out of luck. With the Bf's arrival I could justify going to a proper restaurant. Eating out on your own seems like a ridiculous extravagance. 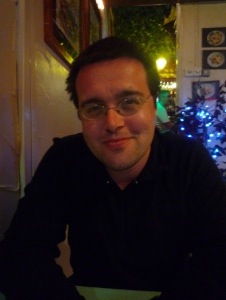 We ended up in what seemed to be Colwyn Bay's sole non-takeaway eatery; Virgilio's or, as it's also known, the Restaurant Time Forgot. If you bundled up every Italian restaurant cliche, scrunched them into a ball, and threw them into 1976, you'd get Virgilios. Plastic vines crawling over a terracotta indoor roof; plastic tablecloths and laminated menus; red, white and green fairy lights thronging the ceiling. We were the only people in there and ate our pollo cacciatore and seafood pizza inbetween whispers. The owner lurked behind a wall, chatting to her friends, but keeping a firm eye on us; we'd barely put our knives down before she whisked our plates away. It was cheap, it was cheerful, and it was a lovely end to the day. It beat a Morrison's sandwich in my hotel room, anyway.

it looks like there's a flamin' Christmas tree behind you there, Scotty love!

It was like an explosion in a fairy light factory, Bren.