1) I like the anonymity and simplicity of a chain hotel - you know what you're getting, and it'll be clean and tidy and there'll be a telly;

2) Last time I stayed in a bed and breakfast someone went through my friend Jennie's underwear drawer.

I dumped my rucksack in the reasonably priced box and headed into town. It was just after five, so the town was closing for the evening, but there was a definite disconnect. Given that it's right at the end of the world (sort of), I'd expected it to be a real centre. I expected plenty of shops and cafes and so on. 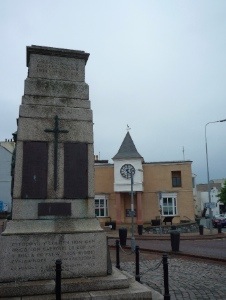 Quite the opposite. The town centre had a desolated air to it. There were loads of empty shops, and I couldn't help noticing that the former Woolworths and Ethel Austin were still vacant.

The only signs of life were the boozers. I'm using that term deliberately. These weren't pubs, these were places to get drunk in. Somewhere to kill time while you waited for your ferry. They were sad, soulless looking places, unfriendly, dark. The fashion for wide plate glass windows and brightly lit interiors hasn't hit here. They were caverns of alcohol, sometimes with a surly troll sucking on a fag in the doorway. 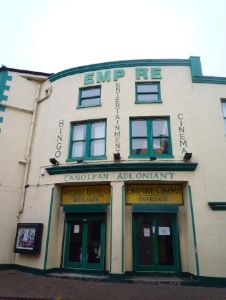 I pushed through the town and out the other side, which didn't take long. Holyhead has only 12,000 residents, less than Heswall, so I was soon in the residential streets again. Though it's only tiny, it still seems to be incredibly God-fearing - I saw Catholic, Pentecostal, and Baptist churches, some of them coming in both "English" and "Welsh" variations. Massive temples to religion. I couldn't believe they were all still viable - surely in the 21st century that sort of thing is a bit passe? It seemed they were doing well, though - in fact new religions are taking to Holyhead: I saw a poster in a window advertising "The Church of Jedi" as a way to beat alcoholism. I'll draw a veil over that, I think. 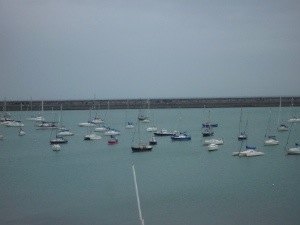 I ended up by the Marina, crammed behind the Victorian breakwater and filled with pretty sailing boats. Below me, on the shore, was the Holyhead Maritime Museum. It was closed, but since it was housed in a converted boathouse, I didn't think it was exactly competition to its Merseyside equivalent.

I have to admit - I had an ulterior motive on this trip. I wanted to see the end of the A5, Thomas Telford's famous post road which starts at Marble Arch in London. The ramrod straight highway was constructed to help whizz post between Ireland and the capital, and it climaxed in Holyhead with a commemorative arch. I've been to Marble Arch, of course, so the idea of having stood at the start and finish of one of Britain's major highways appealed to me. 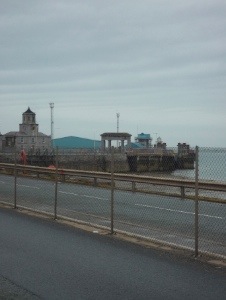 I was disappointed to find out that the Admiralty Arch is inaccessible. It's deep inside the Port and so, for security reasons, it's behind a twelve foot fence. I peered at it through the chain link, temptingly close, before turning back towards town.

The bars and hotels round this area seemed a lot better than the others I'd encountered, perhaps because the walk up the hill tends to discourage the casual pisshead. Plus some European money had been chucked at it, so there were granite columns and comfy benches and grass. I thought about nipping in for a pint, but it was starting to spot with rain, and I was getting hungry. I headed back into town for the Co-op, to get some sandwiches to eat in my hotel room - it was too early for the restaurants and I didn't fancy chips. 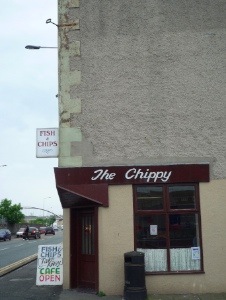 As I returned, I had a look at the Celtic Bridge, one of those epic regeneration projects that seems a bit pointless. It's a massive curved bridge that links the town centre into the railway station and ferry port, which sounds great, until you realise it's only saved you a five minute trip. I suppose the point is that it looks great, and it symbolises Holyhead's rebirth, or something like that. It didn't seem to be very busy. 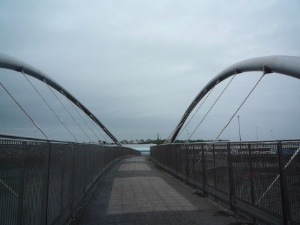 Its name confused me too, because Holyhead didn't feel very Welsh at all. It's about as far away from England as it's possible to be on the mainland, but it seemed very familiar. There was a distinctly casual attitude to bilingual signage, the pubs were called things like "The Britannia" and the "King's Arms", and I saw far more Union Flags than Welsh dragons. I wondered if perhaps their isolation - with the Irish across the sea, and the rest of Wales across the Cymyran and Menai Straits - meant that they clung far more strongly to the idea of Britishness, and had a stronger feeling of being part of the UK. Certainly I can't imagine many other places in Britain commemorating the spot the Queen came ashore in 1958 with a stone pillar: 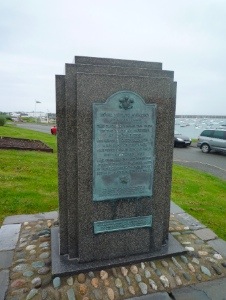 It seemed like a very old fashioned thing to do, very Victorian, very Empire. I felt like Holyhead was a very English Welsh town, or a very Welsh English town, or a very British place to be. I liked it, but it seemed strange to come this far and feel at home.

Lovely start - can't wait to read the rest of it (and see some actual railway).

I've never been to Holyhead, but it strikes me that it hasn't really benefited from being a major port. The ferry terminal and rail station are in the same building, so you can go from one to another without actually setting foot in the town itself, and if you're in a car you can just drive away. Not much opportunity for the locals to make money from passing trade.

I love that the Queen commemorative plaque calls Wales "the Principality" - you'd never get away with that these days!

Looking forward to your review of Holyhead station. Only in Britain could such a historic port station be such an odd, melancholy place.