I am so BORED.

This broken foot thing is no fun. At first it had a sort of charm to it: I never broke anything as a child, so I'd always felt I'd missed out on a rites of passage experience. And it was great sitting around on my backside while the Bf ran around making me cups of tea and my favourite dinners.

But now... now I'd just like to be able to leave the house. I'd like to go for a walk to the nearest pub. I'd like to get myself a cup of tea. I'd like to get some exercise, because I strongly suspect that I've put on about twelve stone just sitting here. Most of all, I want to go out and get some train stations.

What makes it worse is that, as I sit around here, my mind wanders to the practicalities of Tarting, and I get thinking about the hows and whys of the next trip. I have plenty of time to make fantasies of where to go, how to get about; I'm scanning timetables, running through Google Maps. I've even started wondering what I'll do once I've collected all the stations on the map (Stations in Wales? Northern England? The tramlines of Rotterdam? The New York subway?).

For now I'll content myself with a brief update of what's still to be done, care of the black splodged map: 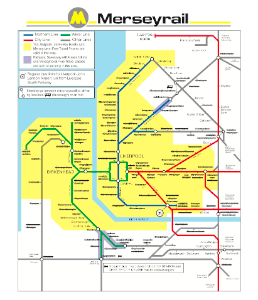 The biggest area I've ignored so far is in Cheshire.

Eight stations there, on two lines, with irregular services (Acton Bridge is served only on feast days when there is a full moon and the Duke's wife is with child) or request-only stops (Delamere). They're also some distance apart, what with it being the countryside. Some thought required.

Another stretch of country line to be collected is in Lancashire: 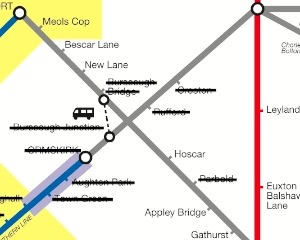 The Wigan-Southport line's been partially collected, at Parbold and Burscough Bridge, but there's still the rest of it to go. Once again, we have stations in the middle of nowhere - New Lane is barely a station at all.

We've also got the Blackpool branch in Lancashire, which still fills me with dread as I promised never ever to go back to that Sodom-on-Sea. Argh.

Beyond that, there are odds and sods. The Bromborough Rake-Bromborough-Eastham Rake complex on the Wirral Line. Birkdale and Southport on the Northern Line. Both of those will signal the end of their respective routes, so I'll leave them for a while longer. Two rogue stations that have been missed out by accident - Bryn and Widnes. And Leyland and Euxton Balshaw Lane on the West Coast Main Line.

Then, right at the end, a final sweep of the Loop. That'll give me James Street, Moorfields, Lime Street and Central, all of which I've got in one way or another but which don't properly count (e.g. I've only done the Water Street entrance to James Street, or the main line of Lime Street). That's a final, victory sweep, one that I hope to accompany with beer at local train-themed pubs, and hopefully with some of the marvellous people I've met through this blog.

It's not much to do, is it? Twenty-nine stations, by my count. Soon it'll all be over and done with. Which makes me sad...

Next scheme: have a pint at the nearest pub to every station that has been opened/re-opened since you were born.

As for the 'next' project, I personally don't think this one will be complete until you've tarted all the 'termini' marked on the Merseyrail map with arrows. Places such as Shrewsbury, Yorkshire (!) and London...

I actually really like that idea "Anonymous"! Though what counts as Yorkshire or Scotland? A quick trip across the border, or Fort William...?

Come and tart Herefordshire. We've only got 3 stations...

I'm the original Anon - and am only so because I can't be hacked creating a stupid google account.

Anyway, I've been giving this some thought... Obviously you'll find your own places and justifications, but to me Yorkshire would probably mean York itself (though I'd accept Sheffield - since it's more Yorkshirey even than York), and for Scotland it would probably have to be Glasgow (i.e. the end of the WCML, which is where the arrow points), though Edinburgh could easily be justified as the capital. 'The Lakes' is more difficult - does Oxenholme count as it's got 'Lake District' in its name or does it have to be Windermere, the closest you can get to an actual Lake?

And as for 'East Lancashire'...

"East Lancashire" is presumably a reference to the Blackpool South-Preston-Colne service.

Doing the arrowed destinations is a nice idea, although it could get a bit expensive (not to mention time consuming - "East Anglia" is a 5 and a half hour trip to Norwich).

I've been thinking about it a fair amount lately (told you I had nothing else to do!). I agree, Glasgow is the only way to do "Scotland" (plus it would mean I could do the Subway, cough), and I think the only way to do "North Wales coast" would be to head all the way out to Anglesey. York would mean I could hit the National Rail Museum, and I'd say Windermere at the very least for Lake District. And East Lancashire - well, there's an East Lancashire Railway in Bury...

Fortunately the Bf absolutely loves Norfolk, so he won't need much persuading to go there!

Maybe do the Borderlands line all the way to Wrexham? Then some of the other lines that disappear off the edge of the Merseyrail map.

That's true... you probably ought to get to each place using the line that points to it... (And if it's written twice, go out and back via the different routes!)