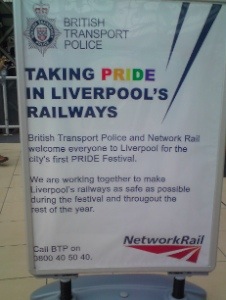 So: it was Liverpool Pride at the weekend, an excuse for the city's homosexuals to get together and bond. I'm not really one for Pride festivals, normally. I went to Manchester Pride about twelve years ago and it was horrible. You paid to get in, which is odd considering it was being held on public streets, and then you were hemmed into narrow, crowded districts of bars and stands. There was an air of frenetic, unpleasant chaos about the place, not helped by the number of people nakedly staring at passers by, summing them up. I was there for about two hours before I'd had enough.

Liverpool Pride though - well, that's different. For starters it was free. Secondly, it was in Liverpool, a city I have very much taken to my heart since I moved here (gulp) fifteen years ago. I thought it was important to go along and take part, especially since there's been an unpleasant rise in homophobic attacks in the city over the past couple of years. Sometimes it's good to show that your community isn't afraid, and is actually proud of who they are.

We marched from St George's Plateau to Dale Street, which had been closed for the festival, right through the centre of the city. I was incredibly pleased to see people by the side of the road, cheering, shouting, applauding: all sorts of Scousers just enjoying the spectacle. Ok, one boy did point at me and shout "poof!" (well spotted), and there was a contingent of Christian Fundamentalists in Derby Square telling us we were all going to hell, but beyond that it was an incredibly positive reception. There's something wonderful about men putting their kids on their shoulders so they can get a better view of a six foot drag queen with awesome legs. 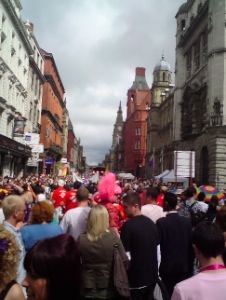 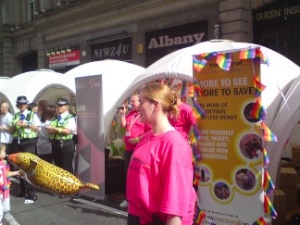 And I was pleased to see that Merseytravel and Merseyrail were part of it all. Merseyrail had a stand, with pink t-shirt wearing staff on hand. I'm not sure what was going on at the stand, because when we walked past there was a man with a microphone trying to drum up volunteers: this is the kind of behaviour that causes me to have a small panic attack in case I'm dragged in and made to sing or something, so I backed away quietly. Otherwise I'd have checked it out for freebies (those pink t-shirts would do nicely, for starters). I'm such a cheap-ass, but then you knew that: remember how excited I got over my Merseyrail flip-flops?

Merseytravel were one of the sponsors, so I knew they'd be there, and I got very excited when I saw two women in Exchange Square with Merseytravel bags. Freebies! Freebies with a big M on them! I immediately dragged everyone to the stand to look for stuff to get. Sadly, when I got there, shyness took over. I couldn't quite bring myself to just say "Can I have a load of corporate guff please?". Instead I satisfied myself with some great Art on the Network postcards: 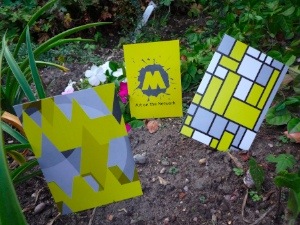 I particularly like the one on the left: it's got a great, fractured beauty to it. The woman on the stall saw me grabbing Art on the Network stuff and asked if I was an artist, before giving me the rundown on the competition.

I also got a postcard of Tony Fitzpatrick's work from Liverpool Central: 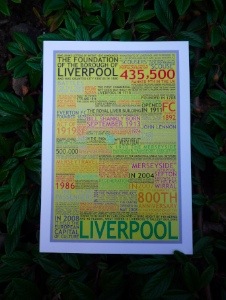 Job done, I rejoined my pals, who immediately called me out for being such a chicken and not getting a bag. Well, it's rude to ask, isn't it? So Jamie, bless him, took the matter into his own hands and went and got me one: 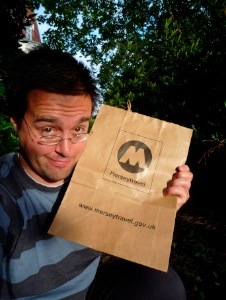 The rest of the day was spent in various bars, knocking back pint after pint. I also bumped into Nat, who recognised me from the blog; humiliatingly, she spotted me in the crowd for Adam Rickitt - I wasn't there to see him, I was just on my way past! Honest! We had a bit of a chat, and I told her to get back on with blogging because she's become positively sporadic in her writing. I'm afraid I was home by eleven, what with being an old fart and everything, but it was a great day. I'm already looking forward to next year.