But Who Will Be Chandler? 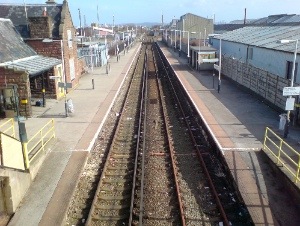 Ellesmere Port. It's the unloved terminus of the Wirral Line. West Kirby and New Brighton have that glamorous seaside ambience. Chester is a hub with a historic past. Ellesmere Port's got a barely open ticket office, an inconvenient interchange with a barely used line, and is a mile from the town centre. On top of which, it's in Cheshire, the county that seems to treat its Merseyrail stations as irritations rather than assets.

That could all soon change. Cheshire West & Chester council, in association with Merseyrail, have put out a call for Friends of Ellesmere Station. CWAC (pronounced "Quack" by its employees, even though they're not meant to) want residents to help brighten the station up with gardening, tidying and general maintenance to make it a more attractive, less unpleasant place to hang out.

This does seem like a good idea on the surface, but my problem with it is: why is this a job for volunteers? Why isn't Quack funding the improvements themselves? Merseyside's stations are fully staffed while trains are running. Merseyside's stations are clean, bright, well-maintained. Some already have gardens, window boxes, artwork, thanks to the involvement of the local councils. The stations in Cheshire, with the exception of Chester, are unmanned, abandoned and a bit grim. Little Sutton's station building is boarded up. Capenhurst's station signs are pockmarked with dents. Overpool could do with a good wash. Even Bache - closest station to Chester Zoo and the University of Chester - is hidden behind a supermarket.

So I'm glad that Ellesmere Port could soon be getting a new shiny gleam. Station adoption has resulted in some great improvements across the country, and community involvement and commitment is obviously something to cherish. I wish someone was putting their hand in their pocket to fund a bit more than just a few hanging baskets.

The stations in ex-Merseyside are directly funded by the PTE, who pay for the 3-shift staffing system, signage and decoration.

The PTE is paid for by a separate levy in the Council Tax, which only the former Metropolitan County boroughs can charge.

For everyone else, including West Cheshire, any subsidy must be paid for out of the ordinary Council Tax, which is capped and unpopular and about to be assaulted further by the Coalition with the ludicrous vote-for-increases plan.

So us in the PTE areas get the full benefit of the small levy, whilst those outside the areas have to decide between railways and education and health and parks and road maintenance and the like.

The former Cheshire County Council was actually very proactive in this regard, with transport being a high priority. So they abolished it.

Don't get me started on Quack Council Tax, as in a former life I was quite the expert!

My irritation is more to do with the very different way that the Merseyrail stations are treated to other Cheshire stations. They are staffed, or where they're not, they're attractive, cared for places (cf Helsby, Frodsham). It seems to be a deliberate policy to ignore the Merseyrail stations, and so the difference and contrast with the Merseyside ones is even more stark. I'm guessing it comes under the category of "someone else's problem"

The crappy condition of the Cheshire Merseyrail stations is in sharp contrast to their Lancashire counterparts (i.e Aughton Park, Town Green and Ormskirk) which are positive palace gardens in comparison.

The difference here is the Ormskirk line's infrastructure has been in place for a century, whereas Liverpool-Ellesmere Port/Chester electrification is a very modern beast, and one wonders how much influence the PTE have beyond the Merseyside/Cheshire boundary?

Scott, you posted a good article on the refurbished Ormskirk station a while ago, and the PTE's footprints are all over it to the point that the station's sign on Derby Street has the familar yellow "M" decal displayed. This in deepest Lancashire.

If only this attention to detail were taken south of Hooton?

To me this suggests favourites on the PTE's part which surely isn't on?

I think that's a bit unfair. The Ormskirk refurb was largely paid for by the DfT, with the second major contributor Lancs County Council. I think it's more to do with that authority's different transport priorities than the PTE playing favourites: you can also see other top-drawer refurbishments at the likes of Burscough Bridge and Parbold.

To turn it round, perhaps, why should Merseyside PTE Council Taxpayers stump up for transport facilities outside our area? Merseyrail have already contributed a good regular service and ticket and information machines.

It's perhaps easier because Aughton Park and Town Green have never been closed, while the Cheshire stations either had their buildings demolished/boarded up, or in the case of Bache and Overpool, weren't built with one in the first place.

Put it a different way: don't hold your breath for Ledsham station being reopened any time soon.

You should be applauding this pioneering example of the Big Society in action.

I mean, why pay for people to maintain the station when volunteers will do it for free?

Perhaps if Merseyrail could find the funds to electrify the line down to Helsby (I believe that the concerns from Shell are now no longer relevant, especially as steam trains run the line occasionally) thhen Helsby would be the terminus which is a far prettier and better kept station?

Hmmm, but that idea giveth and taketh away. You gain the pretty Helsby, but you also gain the grimy Stanlow & Thornton and the deserted Ince & Elton...