I'm sorry to say this but: Widnes stinks. I'm not passing judgement on the town here, just stating a fact. We'd barely stepped off the bridge when our nostrils were assaulted by a nasty, greasy chemical scent. Combine this with a pile of scrap in the distance and a Tesco recycling centre to our left and we weren't exactly getting the best impression of the town. 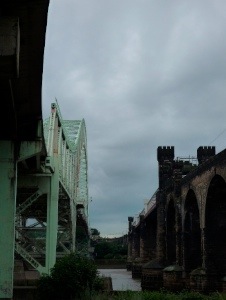 The district beside the bridge is known as West Bank, a little enclave that's separated from the rest of town by canals, railway lines and bridges. It used to be incredibly busy. Before the Silver Jubilee Bridge was built, there was a transporter bridge here, which lifted cars up and over the river on an elaborate elevator. The landing stage for it on the north side was here in West Bank, and you can still see the brick toll buildings. Traffic would back right up the street, as the transporter bridge could only carry about a dozen vehicles, and so the West Bank became a thriving commercial district.

Now it's just a slightly down at heel residential district, with 19th century two up-two downs and some more recent council housing. It was still only nine am, and everywhere was silent, a slightly eerie effect. It was all a bit 28 Days Later. 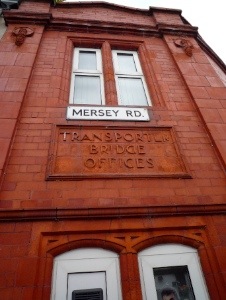 We were following the route of the Trans-Pennine Cycle Path, which crosses the country from Southport to Humberside. The route hugs the canal around the north of the Mersey, taking it all the way to Warrington. It was a bit of a trek, but the weather was being kind, warm but not over hot, overcast but not threatening, and to be frank we both needed the exercise.

Though you wouldn't know it now, Spike Island in Widnes was once a thriving centre for the chemical industry. The Bf is a Fellow of the Royal Society of Chemistry, so Widnes is a bit of a Mecca for him: he explained to me about how the combination of the railway and the canals made it perfect for the burgeoning industries in the 19th Century, and the processes that were invented there. I think he was getting me back for going on about the Halton Curve. Spike Island used to be a mass of factories and plants, but they have long since gone, and the island has been reclaimed as parkland.

Spike Island was also where the Stone Roses held a famous outdoor concert in 1990. I considered putting them on my iPod as a tribute, until I remembered they're a load of baggy shit. There were some boys already set up for angling in the canal, along with a drunk, reeling across the path clutching his Red Stripe. Now, I'm fond of a few drinks, but being hammered at nine in the morning is going a bit far even for me.

As we walked along, we encountered other anglers, rods set up, little stools, tupperware full of maggots. Can someone explain the appeal of fishing to me? I don't get it. The only exciting bit seems to be the casting off; after that it's just a lot of sitting around in pacamacs. Hours and hours of sitting around. The fishermen didn't even have books to keep them occupied - they were just staring off into the distance, waiting for something interesting to happen. And their poor wives. What goes through their heads when their husband gets up at 7am on a Saturday to go and squat by a canal? I can't help thinking it's a bit of a slap in the face. 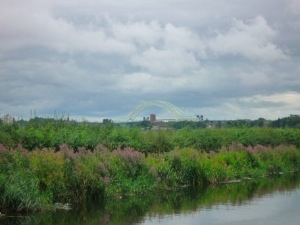 As we left Widnes, though, we were the only people on the path. There are hardly any bridges to the cycle route, so once you start on it, you're pretty much committed. A mile or so on we did find a bridge at Tanhouse Lane, which also gave access to the railway line that follows the north side of the Sankey Canal. Widnes used to be riddled with railway lines, most of which have long gone, but the line still clings on here for freight purposes. Funny how this obscure line is double tracked and well maintained, while the Halton Curve (which people actually want restored) struggles on with one track and bad signalling. 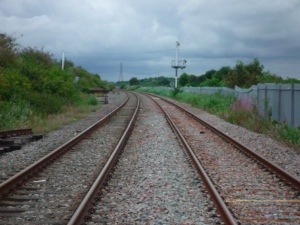 Further on the path suddenly opened out into a gravelled area with a strange sculpture. This was the "Widnes Future Flower", apparently, one of those regeneration company funded curiosities that you sort of look at and go "hmmm". It wasn't awful, by any means, but it just seemed a bit abandoned. It's only been there a few months but it already looked forlorn. 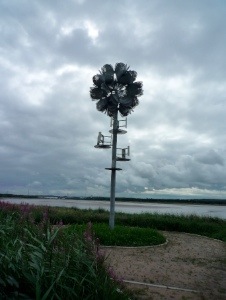 Still, at least there were some benches to enable us to sit down.

We crossed the border into Warrington Borough and I'm sorry, but shame on you Warrington. Halton Council's portion of the trail was marked by well-gravelled, clear paths, benches and artwork. Warrington, however, clearly has other things to spend its Council Tax on, and the quality of the path deteriorated almost immediately. The reeds were twice the height they had been, and it all felt a little downmarket. It didn't help that the canal itself was stagnant here, filled with algae. It was divided from the Widnes section by a sewer, and the symbolism couldn't have been more apt. 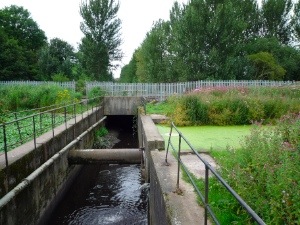 Above us were the massive cooling towers of the Fiddler's Ferry Power Station, gargantuan concrete behemoths that dominated the view. They were strangely silent, for an enormous industrial complex, but I suppose that's modern technology: it's probably all run by two men in a control room somewhere. 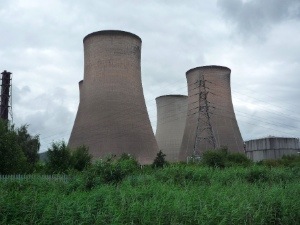 Then things got even more oppressive: not just the power station on the left, but a massive cast iron pipe and fences on the right. We couldn't see anything of the Mersey any more, and instead we were being pushed along the ramrod straight path, no exit, no turning back. It was a bit disheartening: this nature hike was turning into a walk through an industrial estate. 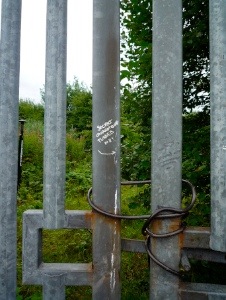 Just when we were beginning to lose the will to live, the canal opened out into a marina. I don't know why this surprised me: there's a river, there's a canal, of course there'll be boats as well. I suppose after all the grime it was odd to be in the world of yachts. Not that this was exactly Howard's Way; a lot of the boats looked like they were in permanent residence. I imagined there were a few of them that were basically used as a place for the owner to relax in the sun with a beer. 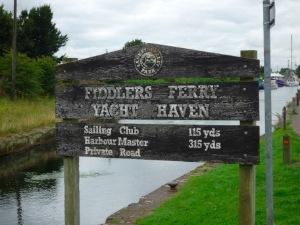 We were getting closer to Warrington itself now, and the path was starting to fill up with dog walkers and women with buggies. The car park at the yacht basin was probably a great place to stop and go for a walk. No anglers, though: there were signs warning us against getting our rods out, so to speak, not only because of low power cables overhead, but also because of the unstable canal wall. At least, I think that's what the signs meant: 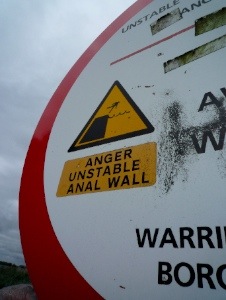 A couple more miles of walking, and finally we were approaching civilisation: Sankey. I have to say, right now, that Sankey is another of those grimly unpleasant Northern names. It sounds like something Charlie Chan would say in a racist 1940s short ("Sankey, honourable gentleman! You are most kind!"). It's now a residential suburb of Warrington. With the decline of the industries that used to line the canal, it's now principally marked out by parkland, with big semis and an astonishing amount of buses: seriously, we were passed by dozens of the things.

It was twenty past twelve, and we'd missed our train. We had to find something to do to kill time, and nice though it was, Sankey didn't seem to be overburdened with galleries or museums to pass the hour. What to do? 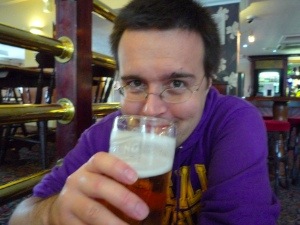 The problem with sitting down after an eight or nine mile hike is you realise just how tired you are. With a pint of beer and a packet of crisps inside us, the Bf and I slipped into "lazy contentment" mode: our feet and legs were barking at us, and we were in no mood to argue. It seemed like a revision of the schedule was in order. The plan had been to get Sankey station, then off again at Widnes and walk to Hough Green before coming home.

Instead we agreed: Sankey station was enough. Widnes could wait for another day - it meant that I'd be able to visit the town as well as the station, which was a plus. So all that was left was a tart of Sankey station: 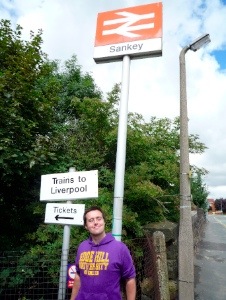 Sorry, Sankey for Penketh station. I'm not sure what's so important about Penketh, but Northern Rail seem to like it: 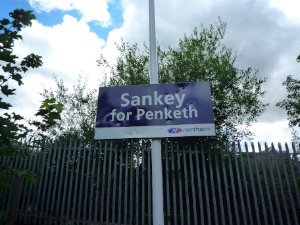 The building is the standard Cheshire Lines construction, identical to Hough Green and the like. It even has the same non-functioning clock. Northern Rail blue's a bit easier on the eye than Merseytravel yellow and grey, though. 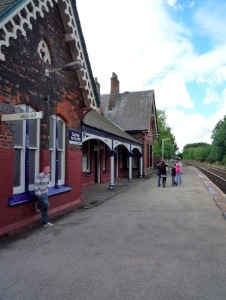 We collapsed onto the train, a packed Pacer with bus seats (which the Bf thought was awful. It's not just me). It was hard maintaining consciousness. We'd been up for nine hours, striding through the countryside, experiencing vertigo, geeking out over train lines. It was strangely exhilarating, but incredibly tiring, and we were sweaty and sore.

We got home and ran a very deep, very hot, very soothing bath. It was a fair reward, I feel.

You've answered your own question with the comments about that double-track line and then the photo of cooling towers... The Halton Curve could collapse with no greater consequence than the upset of a few trainspotters, but if that line fell into disrepair coal trains couldn't get through and the whole of Merseyside and Cheshire would plunge into darkness.

But - hang on a minute - is that photo taken from the middle of the line itself...???

But I think the Halton Curve could be a genuine boon to the network which is being ignored. While freight is undoubtably important, I'm thinking that passenger use is equally important, not just for numbers, but also for the public perception and acceptance of rail services. And of course a line that is open to the public can easily be used by freight.


Yes, that pic was taken from the middle of the line: there was a pedestrian level crossing there. I don't mind admitting I was a bit nervous as I took it!