Last year, Network Rail closed the Loop so that they could renew the track. All the Wirral Line trains started and finished at James Street for about a month, with a shuttle bus taking people to Lime Street.

At the time, I was still working, and I was catching a London Midland train from Lime Street. So for a month, I was disgorged at James Street, and I dashed across town to catch the Crewe train (the bus was rarely waiting outside the station, and I got antsy at the thought of waiting for it and possibly missing my connection). It was an inconvenience, but hey: I'm British. I adopt my stiff upper lip and put up with this kind of thing.

This summer Network Rail decided to close the section of the Northern Line between Central and Hunts Cross, for similar reasons. A rail replacement bus was provided for the displaced passengers, though there are also buses that parallel the route. Fair enough.

But here's the thing: Northern Line passengers got FREEBIES.

Robert is a regular on that route, and a couple of weeks ago he tweeted that there were staff at the station handing out MtoGo vouchers for cheap coffee - an apology for the inconvenience. Hmmm.

Then yesterday, he was given this: 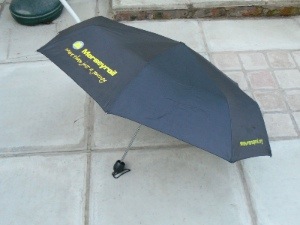 Yes, he got given a Merseyrail umbrella.

So my question is, where were my freebies? Where were my bits of branded tat? I'm outraged. We got nothing at Birkenhead Park, once the Loop reopened, NOTHING. Yes, I'm bitter.

Enjoy your umbrella, Robert. I hope it collapses on you during a rain storm and you end up getting pneumonia.

If it makes you feel any better, the MtoGo coffee wasn't that nice.

Robert instead of a lousy coffee that you STILL had to pay for, you would have been better off keeping that voucher for the fit Henleys guy on the other side!

Erm, actually Wirral Line passengers did get freebies. I don't remember what (it certainly wasn't coffee and umbrellas... more keyrings and mugs I think).

I remember because I was mega pissed off - they gave them out at JAMES STREET when the loop re-opened, to the people who use the station every day anyway and suffered no inconvenience at all! Well, other than having all the other clueless twits using their lifts for a month, of course.

I was bitter because I use Lime St and got NOTHING. But it's unfair to complain about the northern line lot cos some of our side did get stuff.

That makes me even more furious that I didn't receive a sausage.

Though in fairness I did get a care package from them a month later with a keyring, mug, mouse mat, pen and flip flops. BUT NO UMBRELLA.

You were given flip flops? Why didn't you mention it at the time?

Hi Guys,
Sally here from Merseyrail.
We did indeed give out thermal mugs and coffee vouchers to passengers following the loop closure last year. WE did this during peak hour in the evening at the underground stations. We believed that this was the best way of reaching as many people as possible in a short period of time. We concentrated on the wirral line platforms of course. It was actually reported on in the Echo and on Radio Merseyside. I think I may even still have the cutting.

Of course it was impossible to capture everyone who had been affected and i apologise for that. They did fly out so we may have already left when you guys went through the station. Logistically it would have been difficult to hand them out on all our wirral stations.

Its great to get this feedback and i do like to see good honest debate on merseyrail as it will help us to get better at what we do.

I will save you an umbrella scott!

Thanks for the umbrella Sally! :)