A Bridge Too Far

Having conquered Runcorn station, the next stage for the Bf and I was to cross the river to get two stations on the north bank: Sankey and Widnes. Sounds simple, doesn't it? After all, the massive Silver Jubilee Bridge dominates the scene for miles away, and looms over the station itself. 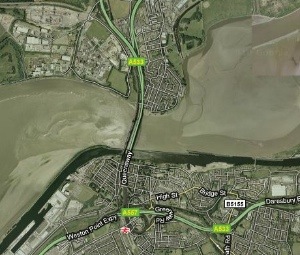 It turns out that nothing is that easy. The bridge might be easy to spot, but it's surrounded by a whole bunch of flyovers, disseminating vehicles to the different points of the town. Big, wide, traffic choked dual carriageway flyovers, with nothing resembling a footpath. We were instead corralled into underpasses and over footbridges and diverted into the "Old Town" of Runcorn, a somewhat depressing looking row of grey buildings and For Sale signs.

We did get to see the pub from Two Pints of Lager and a Packet of Crisps, the BBC3 shitcom that redefines "unfunny". It's bad enough that such a terrible show makes it to air, never mind that it's up to it's ninety eighth series or something, but what's worse is the wonderful, talented Sheridan Smith is trapped in it. It's like a never ending hostage situation she can't escape from: I feel like reporting them to Amnesty International. 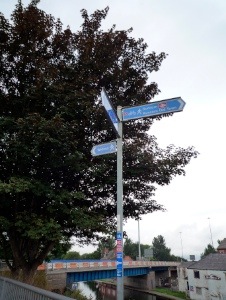 Finally we spotted a solitary pedestrian sign with "Widnes" on it, and we were able to deduce our way to the bridge.

The Silver Jubilee Bridge was originally finished in 1961, but it almost immediately became over used, and so it was refurbished with more capacity. The new-look bridge opened in 1977, hence the name. It's still a major choke point for traffic wanting to cross the mighty Mersey river. Either side of the Runcorn Gap the river widens out considerably, meaning that the next crossings are the Mersey Tunnels at the top of the Wirral or a bridge in Warrington, both miles away from this point. (A plan has been formulated for a Second Mersey Crossing, but as with almost everything in Britain these days, it looks like it's about to get cut).

When the bridge was refurbished, the footpaths were turned into traffic lanes, so a new pedestrian bridge was constructed on the outside of the main structure. It also means that walkers and cyclists are carefully screened from the pounding traffic. 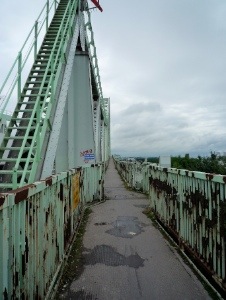 Did I mention I suffer from vertigo? As does the Bf? I probably should have thought this through more clearly.

It was terrifying. We dropped into single file, because neither one of us wanted to walk that close to the edge. We could feel the wind whipping around us, and hear the rush of the river below.

"Do you want a photo of you on the bridge for the blog?" the Bf asked, and because I am committed to you, constant readers, I said yes. See below. 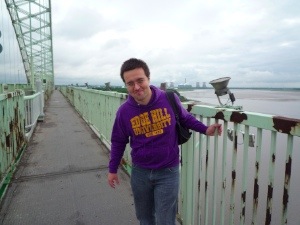 Fear. Pure, unadulterated fear. I was gripping that barrier so tight I could feel the flakes of paint being crushed to powder in my fist. And even then, I was thinking the barrier could break any moment and I could plummet into the swirling waters below.

Oh, there was a pretty view. Lovely. I was too scared to look at it for very long, of course. 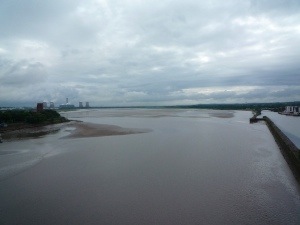 We inched forward until, I kid you not, the whole bridge rattled as a truck thundered past. Both the Bf and I stopped and, though I'm not happy to admit this, we both squealed. The damn pedestrian bridge was wobbling! It was clearly about to break away from the main structure and send us crashing to our deaths! 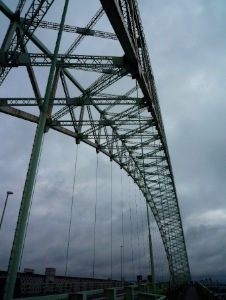 I have to say, suicidal types went up in my estimation. Like all bridges, the Silver Jubilee gets its fair share of jumpers, and I have tremendous admiration for anyone who has the courage to walk halfway across and then climb the barriers. Even if I had a death wish, I couldn't do that. (I wouldn't jump off the Runcorn bridge anyway: the river's too shallow here. I'd be afraid of falling and not dying, just up splatting into a mud flat).

On the other side of the bridge is the magnificently titled Ethelfleda Railway Bridge, named after the 10th Century Queen of the Mercians. She reportedly founded a fort in Runcorn, underneath the piers of the now-railway bridge, and so she was commemorated in this way. At one point, you could walk across that bridge too, but it was eventually closed when the new road bridge came along. The walkway's still visible, but I'm sorry, it'd require an Act of Parliament to get me to walk across it. 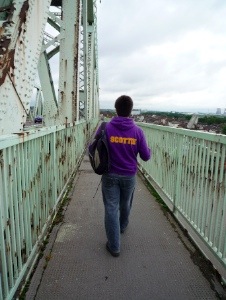 I found I was walking with my hands outstretched, like a tightrope walker: at least a tightrope walker has a safety net. There was sweat pouring off me, and my heart appeared to pounding out the rhythm section for some kind of calypso in my chest.

The iron arch was sweeping down beside me now, and I could see Widnes getting closer and closer. I'd have run to safety if I trusted the bridge to hold my pounding. Then we were down on the land, and breathing became easier. I took one photo of Ethelfleda's castellated tower, because there was a Liver Bird on it, and then we practically collapsed by the side of the road like a couple of marathon runners. 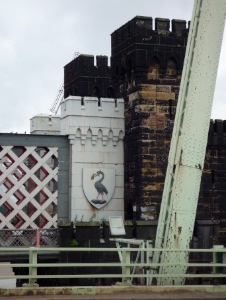 Are we a couple of big nances? Absolutely, and I don't care who knows it. I'm glad I've crossed the bridge, I'm glad I can cross it off the list of things to do, but I'm just as equally glad I never have to do it again. The Mersey Tunnels are a far more civilised way to cross the river. I'll stick to my underground trains, thank you very much.

Email ThisBlogThis!Share to TwitterShare to FacebookShare to Pinterest
Labels: oh the humanity, Runcorn, The BF

According to Wikipedia, the other towers also have emblems: one showing the coat of arms of the City of London, and the second depicting Britannia.

I think for completeness you should go back and get pictures of them. :)

Lol, I used to cross the windness/runcorn bridge alot when I lived in runcorn and I was a bit scared too, you can feel the bridge sway as the traffic passes on it.

As a kid, it used to give me nightmares or at least anxiety.

I did once try to cross the railway bridge, before it was heavly corderned off, I got to the footpath and then turned away.
It just looked too unsafe and I was just being a chicken. Id actually love t cross it one day.

The two Brittania emblems are actually the coat of arms of the London and North Western Railway, which was responsible for the construction of the railway bridge.