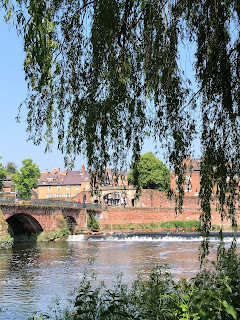 Earlier this week, through no fault of my own, I found myself in Chester with a couple of hours to spare.  It was early on a scorching hot Bank Holiday, and the city centre was still lazily waking up: people were comfortably sleeping off barbecues and the shops were opening... whenever.  I wandered over the Dee to Handbridge, and sat for a little while watching the weir and listening to a podcast.  Then I remembered a little bit of transport infrastructure I'd never seen, and decided to go and take a look.

I have long campaigned for more footbridges by railways.  Actually, I say campaigned: what I actually mean is I have long bitched about the lack of footbridges by railways.  It mainly stemmed from when I visited Tonfanau station, during a lovely trip along the Cambrian Coast.  Tonfanau is on the north side of the Dysynni estuary, and Tywyn is on the south side.  The railway takes the shortest route between the two points, over the river, while the road goes round the long way.  Not wanting a five hour detour, I clambered up onto the railway and basically trespassed.  I'm not proud of it.

My point is: there should have been a footbridge.  (There is one now, built a little further inland, and I am disappointed they didn't name it after me).  If there's a railway forming the shortest crossing between two points, I think there should be a footbridge strung along the side of it.  It's a quick, easy fix, and a handy way to link communities.  There's nothing more annoying than seeing a Sprinter merrily skim across a river while you clamber on board a bus for a huge diversion.

There's only one crossing of the River Dee between the Grosvenor Bridge in Chester city centre and the A494 in Queensferry: the railway bridge taking the line to North Wales.  And, for once, there's a footbridge for pedestrians, connecting the racecourse to the upscale district of Curzon Park.  I suspect it's no coincidence that a footbridge was deemed necessary for those two parts of the city rather than, say, connecting Saltney with the industrial park at Sealand.

After a long hot walk through Chester's most suburban suburbia I turned up a side road to the golf course.  The footbridge is reached via some steps from the road surface (so bad luck cyclists and people in wheelchairs), taking me down into cool undergrowth.  The footpath was slippery, despite the baking sun, and angled downwards just to add to the general feeling of mild peril. 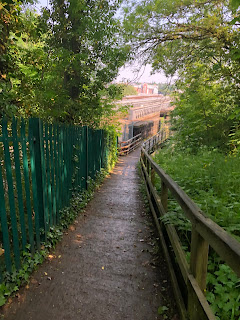 It was only as I reached the crossing itself - literally as it hoved into view - that I remembered: bridges tend to be high.  And I don't like heights.  Hate them.  My heart immediately began to pound as I realised I'd walked two miles to reach a footbridge I really didn't want to walk over. 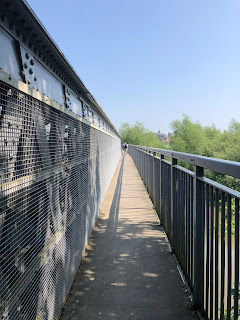 There is a facet of my personality that will always outvote something as small as crippling vertigo, and that is my bloody mindedness.  If I had come all this way to walk across a bridge, then I was going to bloody well walk across a bridge, and not even the prospect of dying of a heart attack midway could stop that.  I put my glasses in my pocket - because I'm always scared they'll slip off and fall in the water - and ventured across, one hand skimming the handrail just in case a train came across and tried to shake me into the river.  To my left, I could see the railway tracks; to my right, an admittedly beautiful view. 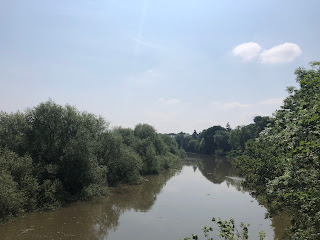 After, oh I don't know, about four and a half weeks of walking, I finally reached the stairs on the opposite bank. 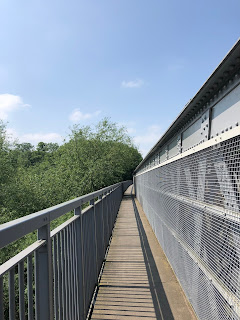 I headed down them to the blessed safety of dry land.  On the north bank, there's far more places to go; a riverside stroll, or a walk between the railway viaducts and the greenery of the Roodee.  It was all very pleasant, and helped to moderate my pounding heartbeat.  There should be more footbridges attached to railway bridges, because they're a simple but effective way to make cities more pedestrian and cycle friendly; just don't expect me to enjoy using them. 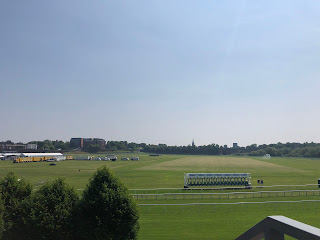