The Shock And The New 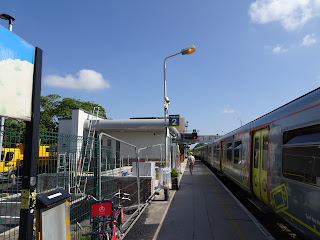 "What are you doing?"

If you're a weirdo railway nerd, hearing these words at a station sends a chill down the spine.  We live in strange, difficult times, and somehow in all of this, taking pictures of a railway station has slipped onto the "typical terrorist behaviour" list.

I've been lucky.  I've been doing this blog for more than a decade and I've not been stopped from taking photos yet.  It's always in the back of my mind, particularly when I'm in a busy station, but so far I've been able to snap what I want.  It obviously helps that I'm a middle-aged white guy, rather than, say, a young Muslim.

I was at Ainsdale, on Merseyrail's Northern Line, and I was taking photos of the new station building.  A slight wooden structure, more cottage than ticket office, had been replaced with a far more impressive structure, and I wanted to take a look. 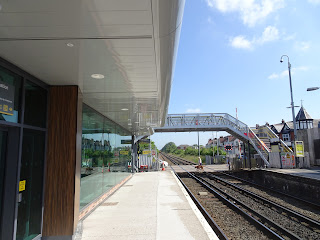 I was just leaving the new ticket hall when a builder approached me and asked me the scary question: "What are you doing?"

"Just taking some photos," I stammered.  I was instantly on my guard.

"Why are you taking pictures?" he continued.  Obviously, the correct answer should have been, "because this is a FREE COUNTRY, and I am entitled to do whatever I like if it doesn't inconvenient anyone else!"  I didn't, of course, because I am a coward.  Instead, I garbled, "Because I like train station architecture."

It turned out this was exactly the right answer.  The man in the hard hat wasn't interrogating me because he thought I was ISIS; instead, he wanted to talk to another fan.  It turned out he was very, very proud of Ainsdale station, and what he had helped build.  "What do you think of it?" he beamed. 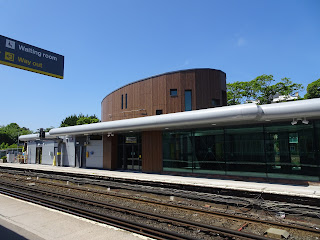 Here's what I think of it: I like it.  Merseytravel, to their credit, have never bought into the off-the-shelf station designs Network Rail have offered in recent years (for example, at Buckshaw Parkway).  They've always hired their own architects - in this case, Liverpool firm Owen Ellis - to come up with something unique.  At Ainsdale, they've scored.  The drum at the centre of the station building is a proper landmark.  It's a statement.  The different coloured cladding draws your eye and points out: important stuff here.  This is the centre of the station, so head to this bit to buy tickets.  I hope it's dramatically lit at night.  My builder friend told me it hadn't gone down well with the locals initially, but they were coming round. 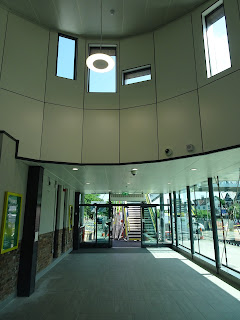 I can imagine it must have been a shock after the cast iron and wood of the old station, especially for the more conservative residents, but as they used it they'll have come to appreciate it.  It's quiet and calming but at the same time interesting.  And it works as a space - it flows from the entrance through to the ticket window through to the platform. 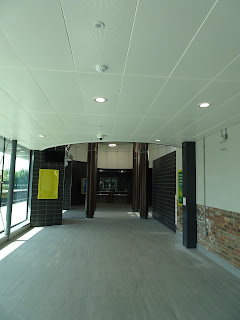 It's still not finished, of course; that large empty void will be filled with benches.  Stations are a place.  You should feel comfortable being in here at ten o'clock at night, and the bright open building does that well. 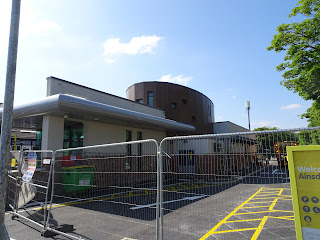 We chatted for a little bit, both independently bemoaning the fact that this sort of development isn't more common.  "They could do with spreading some of the money down the line," he said, and it's notable that the area that gets the more interesting architecture is full of well-to-do passengers.  Maghull North opens next week, and though I haven't seen any pictures of the new building, the renders showed a distinctly plain station.  Good architecture should be for everyone, not just the rich.

I finally managed to drag myself away from him.  I was a little shaky, because (a) I'm never good at talking to people and (b) I'd fully expected him to be aggressive.  His pride in his work was charming though, and he's right: it is a very nice station.  It's a very good station.  I might even go back and see it again when it's properly finished.  And when the builders have all gone. 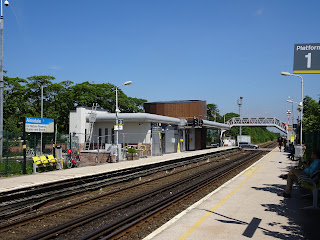