There used to be two routes from Liverpool to Southport.  One is still there: the ramrod straight Northern Line from Liverpool Exchange (now Moorfields) into the town centre.  The other took its own sweet time getting there.  The Southport and Cheshire Lines Extension Railway made its way from Aintree to Southport via the most indirect possible route.  It ran across empty fields and called at tiny hamlets with barely a couple of houses.  It lost money hand over fist, and was finally put out of its misery in 1952. 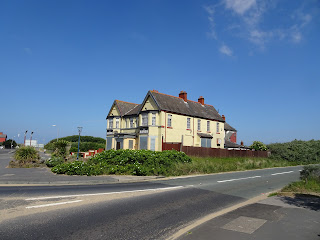 Head down Shore Road from the present-day Ainsdale station and you arrive at what was Ainsdale Beach halt.  It would've been handy for the Pontins resort, except that didn't open until 1970.  Yes, they were still building new holiday camps when Bowie and Bolan were in the charts.  Even more incredibly, it's still there, looking like Strangeways in satellite pictures. 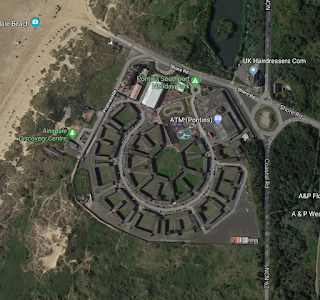 Great for the beach and everything - the good thing about Southport is there is a hell of a lot of beach (not so much of the sea, but loads of sand) -  but it's weird to think that in 2018 people are still having the Hi-de-Hi! experience.  Especially when it keeps making the news for all the wrong reason (just today: bed bugs biting a toddler).  The shuttered hulk of the Sands seemed to act as a warning to travellers.  This resort couldn't even support a pub.

I'd decided to walk from Ainsdale Beach to what would have been the next station on the line, Birkdale Palace.  The entire railway was torn up after closure, and the section between Woodvale and the town centre was turned into the Coast Road, a handy bypass for the small, exclusive villages that trail away from Southport.  It's a simple two lane road, with a combination bike and footpath alongside, and I thought it'd be a pleasant walk on a warm day. 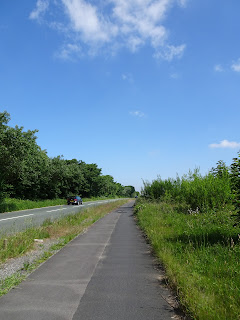 I made a mistake almost immediately.  After a while of walking on tarmac, I spotted a pedestrian sign pointing into the grass at the side of the road.  I can't resist a detour, so I swung off the main road and into the hillocks at the side.  That was how I found myself on a long, undulating path, rising up and down on the dunes, wedged between the busy road and the fenced off fields. 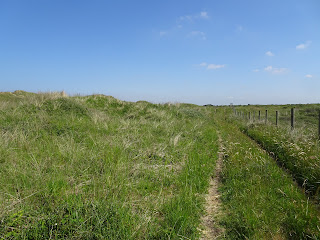 I'd picked probably the most boring and yet also most tiring way to walk to Birkdale.  The path was rough and threadbare, but the high sandy dune to my left meant there was no way to get back down to the pavement.  To my right was an vista of overwhelming flatness, just a load of scrub and the odd tree until another dune blocked the horizon.  And it rolled, tight on my calves going up, slippery sand going down. 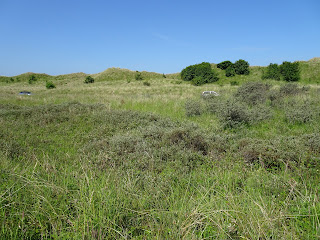 On my left I could see the tops of the cars and the occasional brightly coloured cyclist, but there was no sense that I was by the sea.  It was clear why the S&CLER's route had failed to win over passengers.  You don't mind an elongated journey if it is at least pretty.  The quickest way from Lancaster to Carlisle is not via Barrow, but thousands of people make that journey specifically to see the beautiful sea views from the train.  Here, the train would have pootled along on its endlessly snaking path, and all you'd have seen was a series of green hillocks.  On the other side of that dune in the above picture is the wide expanse of Ainsdale Beach and the Irish Sea, shimmering in the June sunshine.  You can't see any of it of course, so you'll just have to imagine it. 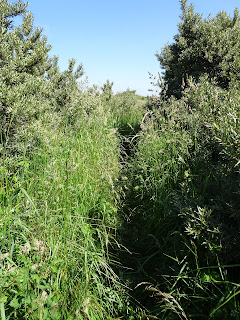 It was also quite clear that I was the first idiot to come this way in a long time.  I hacked and slashed through stinging nettles and brambles, my lightly tanned arms suddenly crisscrossed with red lines.  My bloody mindedness stopped me from giving it up as a bad lot and turning back - I'd come so far! - but I certainly cursed that tiny little pedestrian man and my stupid curiosity. 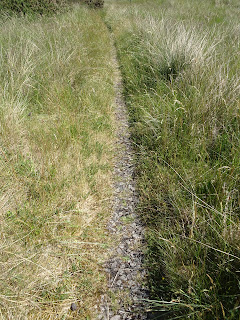 The backs of houses appeared, and I was able to escape onto the foot-slash-cycle path.  This presented problems of a different kind.  Suddenly there was traffic.  The thing about these theoretical shared spaces for cyclists and pedestrians is that cyclists go a lot faster and tend to be a lot stroppier.  I was perfectly within my rights to walk on the path, and I stuck to one side of it to allow the people on bikes room to go round, but I still got angry bells for having the temerity to be in their way.  The long stretch of the cycle route gave them a chance to really hammer those pedals, and they didn't need some fat blogger lolloping in their way.  After a while I just stepped off the pavement when I saw a cyclist coming; it wasn't worth trying to stand my ground any more. 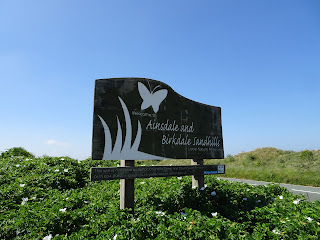 Birkdale Palace station served the hotel alongside, which was just as glamorous as you're imagining.  Opening in 1866, the hotel aimed at the more luxurious spa end of the market, hoping to attract rich Victorians wanting to take the air.  Its guests included Clark Gable and Frank Sinatra, but despite its glittering reputation and handy transport links its parade of owners all ended up going bust.  It finally closed a century after opening, and was demolished. 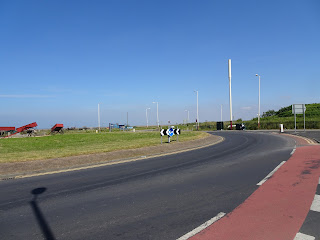 There's nothing left of the station, and the site of the hotel is now uninspiring houses.  There's still a Palace Road, though, and the Fishermans' Rest pub occupies the former hotel gatehouse. 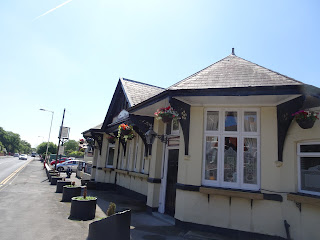 I wandered into the chichi Birkdale village, with its award-winning delicatessens and butchers and endless gift shops.  I nipped into one, because it's the BF's birthday soon and I needed a card, and witnessed a posh woman bark "Weddings!" at the staff.  Just that.  "Weddings!"  Not a question, not an enquiry.  The woman behind the counter showed her the cards, and the posh woman snapped "Matching paper!"  She was exactly the kind of woman who would complain to the manager if she received poor service in a shop, without realising that it's a two-way street; maybe if you were less vile, people would be more helpful.  I hope the waiters spat in her champagne at the reception. 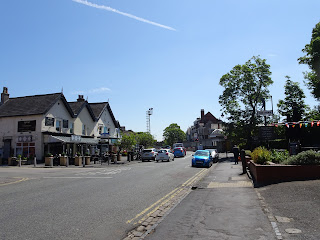 Birkdale was certainly far too posh for me, dripping with sweat and with jeans covered in sand and brambles.  I could've done with a drink, but there were only glamorous bars with people in perfectly starched shirts sat outside sipping at chilled white wine; I didn't want to depress the house prices.  Instead I slinked to Birkdale station for the train home.  The quick, direct, no need to go via Sefton, train home.
Posted by Scott Willison at 20:25

Pontins Ainsdale is probably about as exciting as Strangeways too.

At least you got angry bells - the cyclists here just race up from behind you with no warning whatsoever.