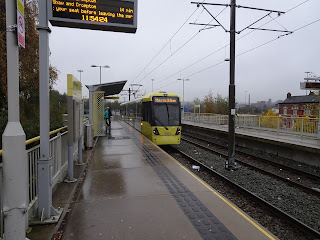 The moment I stepped off the tram at Hollinwood I thought "I've been here before."  I don't mean in an all-Metrolink-stops-look-the-same way; I mean it was actually familiar.  I wracked my brains; when had I previously wandered round East Manchester?  And then it came to me - almost exactly three years before, when I'd come to this part of the world with Ian and Robert.  We'd worked our way down the Rochdale line and then, when it was starting to get dark, walked from Moston station to here (looking back at the post, I realise I spelt it Hollingwood, and I apologise profusely).

I was impressed that I'd remembered it so clearly, though in truth it was mainly down to the stop's location.  It's squeezed in alongside the M60 motorway, with the giant hulk of the Trinity Mirror printing presses overshadowing it and an electricity substation at its foot.  It's not exactly a Garden of Eden is what I'm saying. 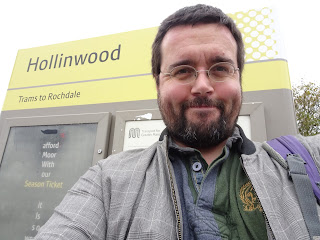 I took my sign picture on the platform, because I didn't want to get caught again like I had at Newton Heath (sure enough, once I got down to street level, there wasn't anything in the name of decent signage) and looked around.  I had to cross over the motorway, of course, and Google Maps seemed to indicate there was a junction further down the road that was bound to have pedestrian crossings.  But my eye was caught by a footbridge, running alongside the tram track and seemingly also going in the direction of my next stop.

I'm always intrigued by diversions - alleyways, signed footpaths, bridges and tunnels.  Little landscape quirks that take you away from the mainline.  I remounted the steps to the tram stop and walked confidently towards the footbridge. 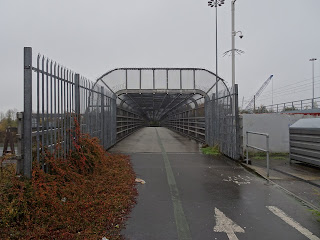 It was a wide, generously constructed bridge.  Plenty of room for pedestrians and cyclists.  Fenced in to keep you safe and minimise suicides.  I'd thought this would be enough to stop my vertigo, but no, about halfway across I glanced through the mesh and saw the swarms of traffic passing under my feet and my stomach lurched about four feet to the right.  From then on I kept my eyes down, getting off there as fast as I could until I was able to pause on the other side. 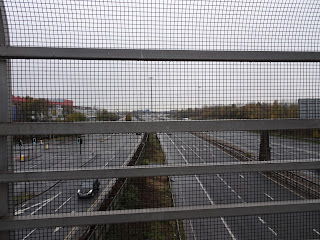 The bridge, it turned out, didn't shadow the tram tracks entirely.  The path took an immediate turn to the left, so that it paralleled the M60.  In for a penny, I thought, and merrily started walking down it.  About five minutes later I realised I was walking in the wrong direction and I had no idea where I was headed. 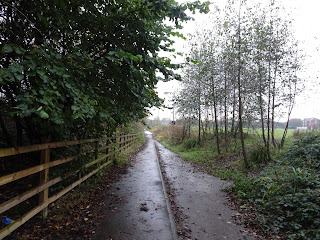 The motorway hustled to my side, traffic muffled by the trees but still an ever-present hum.  The path was slicked with wet leaves and litter.  It seemed to be a cut through past a recreation ground, but there weren't any side routes off it.  I was being shepherded along without any clue about my destination.

It was in some ways exciting; the thrill of exploration.  In other ways, I was intimidated.  The lamp posts above the path had wire boxes around the bulbs to stop vandals smashing them; the back walls that now hemmed it in from the right had broken glass and spikes on top to stop intruders.  Finally the path broke out into a back street, and I was able to step away from the footpath and onto a proper road. 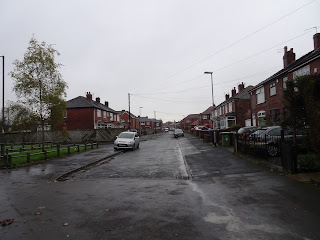 There was a tight network of terraced houses, lined along straight streets.  I followed the grid towards the main road, spotting my first Christmas decoration of the season on the way: a glowing LED reindeer in the window of one of the houses.  Just beyond it, in the gloom of the front room, I could see a white Christmas tree, fully set up.  I immediately put it out of my head.  I'm not in a Christmassy place this year.  Sometimes I've stuck I Wanna Kiss You So (Christmas In A Nutshell) on repeat from Bonfire Night; sometimes, like this year, it just hovers as a vast blackness at the end of the year, a worry and a stress that I'm sliding towards. 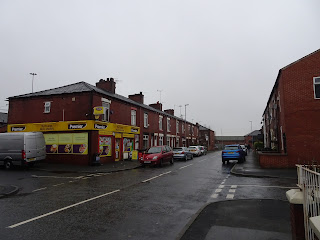 South Chadderton tram stop was crammed behind a park and a new development of homes for rent.  I walked down a path between the two, past a group of builders having their lunch in the front of their vans, and found it tucked away. 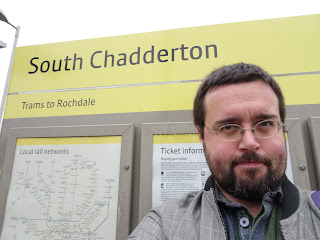 A quick skip on the trams and I was at Freehold. 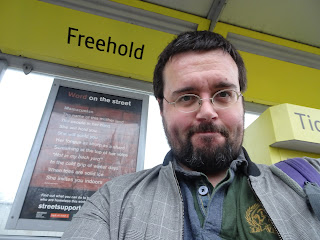 A low, wet cloud had descended, scattering spray over me as I disembarked the tram.  It clung to my face and my jacket and misted my glasses.  It also cast a magical gloss over the hulk of the Hartford Mill across the way.  The chimney disappeared into the clouds and made it romantic. 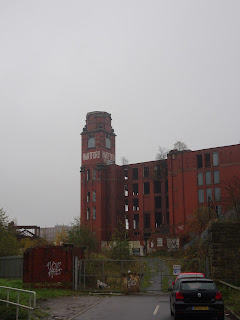 I strode purposefully away from the tram stop along sharply angled brick terraces.  A woman in a hijab tried to control the over-excited three year old at her feet; she had hold of an Octonauts lunchbox in one hand, and the girl's hand in the other, and it was difficult for her to keep a grip and walk while she twisted beneath her.

I should've really twigged that something was wrong when I walked under a railway bridge just as a yellow and grey tram passed above.  I knew that I was headed for a right turn, a turn onto a main road to take me to Westwood tram stop, but it didn't seem like it was close.  When I encountered a mini roundabout, I realised something was wrong, so I whipped out Google Maps. 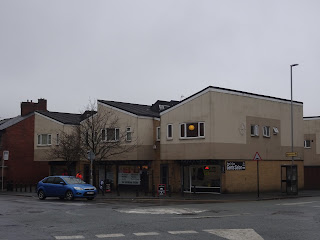 Yep, instead of turning left out of Freehold, I'd become so enamoured by the mess of the mill I'd turned right.  I was now virtually back in South Chadderton, so far away from Westwood it wasn't worth turning back.  I sighed and followed the curve past tiny sandwich shops and auto parts stores.  This time, instead of walking round Coalshaw Green Park, I walked through it, past silent swings and glistening bowling greens. 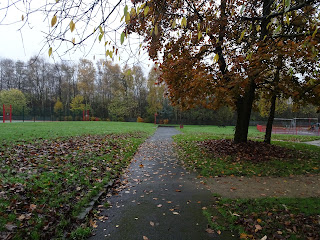 After a brief wait at South Chadderton alongside a lad who found the bench too complicated to work properly - he sat on the back and rested his feet on the seat - I finally disembarked at Westwood. 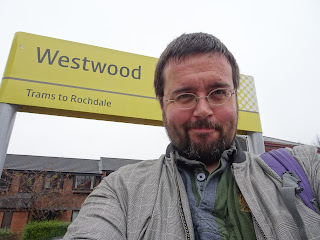 I got that sense of deja vu again, and I realised that the last time I'd come this way, Westwood hadn't existed.  The concrete had been there, ready for the tram stop, but the line still followed the railway route to Oldham Mumps; the town centre route hadn't been built yet.  It was deeply satisfying to know I'd witnessed the before and after. 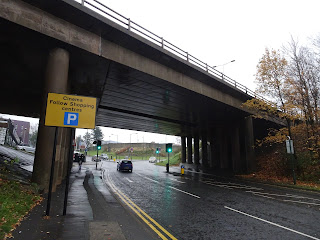 I slowly climbed the steep hill - I was suddenly aware that I was on the edge of the Pennines - and reached Oldham town centre, close to a restaurant with the vague name of Kebabish ("Is this 100% meat in this kebab?" "Ish.").  It was one o'clock, and the schools and colleges that hugged the ring road had disgorged their students across the town centre.  Everywhere I looked there were fresh faced youths being excitable and fun and lively.  I skulked by. 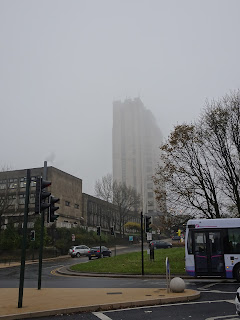 Oldham King Street stop was absolutely full of them.  The sixth form college was almost next door, and they swarmed over the platforms, loud and boisterous.  I hid at one end and took a surreptitious sign picture, though for the selfie-literate kids, it was probably nothing unusual. 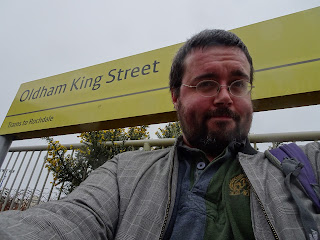 I boarded a hot and full tram, the windows steamed with all the packed bodies inside.  We wound our way past busy food places filled with students - chicken and burger bars swarming with kids, cafes with them sat in the window, and a disproportionate number of dessert-only restaurants.  If you want to get horribly obese, Oldham seems to be the place to go. 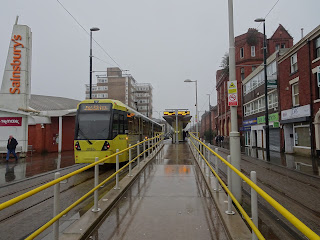 I'd been slightly concerned that I'd look an idiot, boarding at King Street then getting off at Central, but it turned out half the students on board were doing the same thing; it's lucky they have all those hills in Oldham forcing the kids get some exercise. 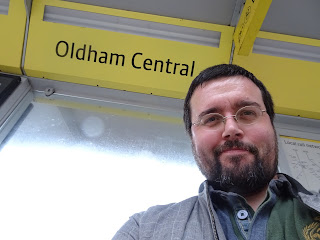 I climbed the street into a wide open plaza around the Town Hall.  The building itself had been empty since the 90s - the council was now in the civic centre on the other side of town - and it had fallen into disrepair.  Finally, a couple of years ago, the area was redeveloped to form a new cinema complex.  It's a shame that the building has effectively been turned into a very elaborate foyer, but it's better than it falling apart. 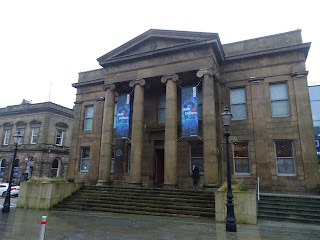 It was an impressive bit of urban renewal, and I wondered if it would've happened without the trams.  Trams make places feel alive and modern; for such a traditional piece of public transport, they feel exciting and forward thinking.  They drape a little bit of magic across towns and add a liveliness buses can't manage. 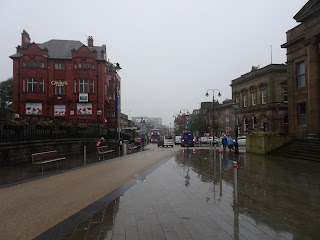 Back down the hill on the other side towards Oldham Mumps, the least attractive station name in the Western hemisphere.  It was the same strip of burger joints and anonymous fun pubs I'd seen a few years before - perhaps a little shabbier, but still busy.  A barmaid laughed with her regulars outside one of the pubs as they shared a fag break; a chicken shop with a couple of lads in giant parkas tucking into burgers.  Oldham isn't a particularly pretty or exciting place, but it's hard working and unpretentious.  It's hard not to like it. 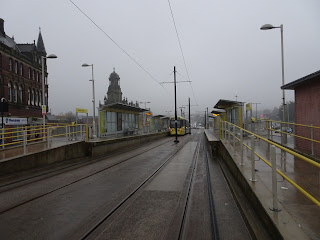 Oldham Mumps station was the other side of the ring road; it hung around as a tram stop until they finally opened the town centre diversion.  Now it's waste ground, waiting for a development of shops and flats called Prince's Gate that still hasn't appeared.  I clambered onto the platform and huddled against the misty rain.  Back the way I came.  Again. 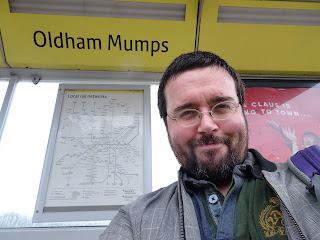 On an untelated note have you seen the new Merseyrail network map? Its far too busy, makes little sense and will leave you wondering whats going on in the contacts bit...

I've seen a photo of it, but I've not seen it in the flesh yet. I did go to the Merseytravel website to see if they had it there but they're still using one from 2009 with the SQUARE version of the loop...