There's been, over the last few months, a quiet design revolution at Merseytravel.  I'm not sure if this has been a corporate-led initiative, or if they've employed a couple of new, go ahead designers, but suddenly there's been an upswing in the quality of the promotional material produced by the PTE.  The posters are a little wittier and cleverer - this one, for example: 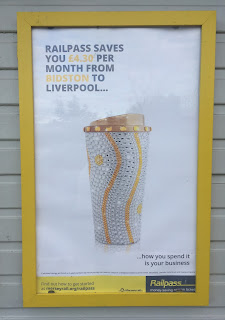 Or these two advertising term time travel, which I love.  They're simple, striking and fun; they catch the eye and give you the info you need.  Side by side like this they make a real impression. 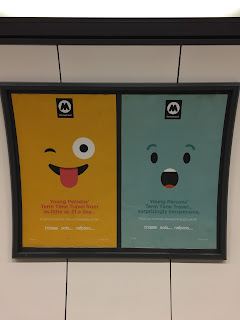 Meanwhile a new symbol has appeared, the "bubbles" which tie the Merseytravel logo to the transport type.  It's swept across the county's bus stops and it looks good: modern, still in the corporate yellow and grey, and easy to understand.

A new Merseyrail map under this creative team should be great.  Can you hear the sadness creeping into my voice?  Because the new map is different, certainly, but it's not great. 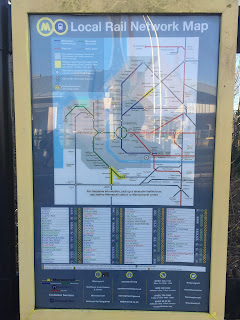 I'll start by apologising for the poor presentation of the new map.  I'd like to show it taken directly from the Merseytravel website, but they're still using the old map.  And by old, I mean a version dated 11/09 - yes, November 2009 - which still shows the Wirral Line loop as a square.  It may not have a bunch of new lines on it every six months, but come on; that's just lazy.  So I'm afraid you're going to have to rely on photos taken by me on a bright day at Hooton station and try and look past the reflections.

Initial thoughts: too much grey.  Grey border, grey info, grey everywhere.  There's no need for that grey backdrop to the map, especially as it highlights the mismatch in width between the map box and the station key underneath.  They don't align and it looks clunky. 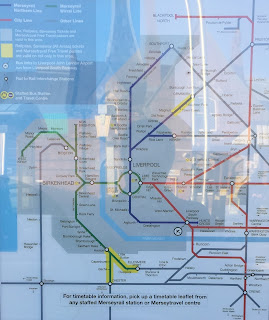 Oddly I don't mind the grey being used to show the Merseytravel area.  That bit works for me; it makes the blue/green/red of the lines stand out more.  They're now definitely more important than the grey "other lines".  Although what's with that notch in the grey above Little Sutton?  That's either a glitch or an excessive dedication to the geographical boundaries of Merseyside.

And did you notice this isn't a Merseyrail map?  For the first time ever, this is headed "Local Rail Network Map" rather than Merseyrail.  The local rail company is relegated to the box at the bottom, just one of the transport providers: 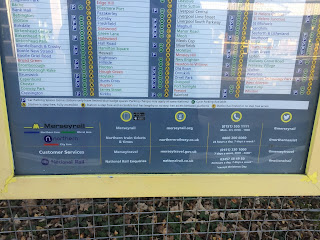 Yes, I know that technically a Merseyrail map would show the Northern and Wirral lines and nothing else, but the diagram headed "Tube Map" in London should only show Tube services yet finds room for the Overground and trams and the Dangleway.  It's a change that makes me sad, but I can acknowledge it's perhaps a change for the better - or at least, the more accurate.  It's interesting to note that Northern are listed only for the City Line services, not for, say, Southport to Wigan; and that Arriva Trains Wales doesn't get a mention at all despite the Borderlands Line still occupying a prominent position.  Perhaps they didn't want to clutter up what is already a very cluttered bottom panel. 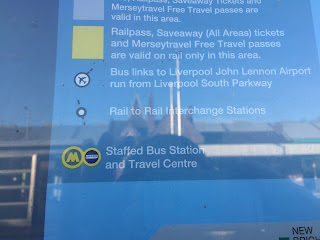 A new addition is the logo for a Merseyrail bus station and Travel Centre, which seems like a good, logical addition... until you see how it's been applied.  The logo appears six times on the map.  Bootle New Strand and Huyton's Travel Centres are within shouting distance of their station; St Helens' is a very short walk away, so it's fine that they get the logo next to their station.  Lime Street has Queen Square, which is conveniently located if you come out of the right exit of the underground station; otherwise, it's a bit of a hike.  The logo at James Street is a fat lie, unless you think that a trek down the Strand is a handily located interchange.

Birkenhead's travel centre symbol, meanwhile, is a collective throwing up of hands.  It's closest to Conway Park station, but of course, Conway Park doesn't have "Birkenhead" in its name.  So they've simply stuck the symbol next to the giant BIRKENHEAD on the map, tucking it in the notch of the Wirral Lines, and giving absolutely no clue which of the three stations nearby is closest.

(Merseytravel's seventh Travel Centre is within Southport railway station, yet it doesn't get a symbol appended to it.  Why?  Because all the buses go from Lord Street, and the logo is for Staffed Bus Station and Travel Centre).

Up there in the key you might have noticed a weird phrase - "Rail to rail interchange stations".  What they're trying to explain is that a dotted line indicates two stations withing walking distance of one another - i.e. Greenbank and Hartford.  I don't think "rail to rail interchange stations" does mean that.  They've also removed the bus link between Burscough Bridge and Burscough Junction; I'm not sure if this bus no longer exists, or if they just decided it wasn't necessary to show it any more.

There is, sadly, a real missed opportunity for some good news on the map.  Maghull North station is being built even as we speak; it's on target to open in 2018.  It'd be nice to put it on the map as Under Construction.  But no, that quarter of the map is still the same as ever (please note the dead spider is a feature unique to Hooton and does not appear network-wide... I hope). 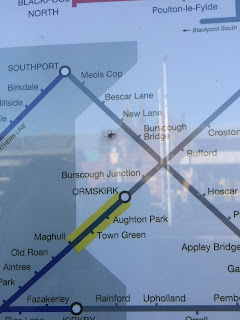 At the same time, Maghull North offers a little bit of hope.  Slotting it in there between Maghull and Town Green will require a redraw of the map in the very near future.  The Merseytravel boundary line will move; the gap between stations will need to be rejigged.  It means that this current version of the map is temporary.  I hope that the people responsible for those great posters at the top are given a bit of leeway to experiment and innovate.  The Merseyrail map is a great diagram that just needs honing to perfection.
Posted by Scott Willison at 14:54

I was asked at Lime Street which (out of 4) maps I preferred-and any features I particularly liked. This was the best out of a bad bunch! One of them had the information about car parking ect. (The stuff in the box under the map) by each station name! It could have been a LOT worse!

I am FURIOUS that I wasn't at this event! I'd love to have seen the alternatives. I'm trying to imagine the info overload version and my brain just keeps fizzling.

At least they got rid of the 'FUCKING SQUARE'

This is the smallest of small mercies.

Wait till you see the new Northern Line timetables! They have forgotten to include Southport - Wigan on the front page map, have cit and pasted the far too complicated contacts section from the map landscape on the first page and have binned the news page, which as you have mentioned could have included Maghull North! I wonder if Maghull will have a name change?

On another note after reading the latest minutes from the Merseytravel it will be the early 2020's before Walrus rollout is completed!

The bubbles are nicked from TfWM:

As for Burscough there's never that I know of been the kind of dedicated shuttle bus that that line probably implied, it was just a service bus that happened, probably fairly infrequently, to pass both. Probably sensible removing that.

I think merseytravel are about to rebrand. Look how little they are using it? Only the M appears now. Maybe metro Liverpool?

Well, the precedence seems to be Transport for... TfL have stolen the Liverpool initial, so maybe TfGL (Greater Liverpool) or TfLCR (Liverpool City Region). TfM (Merseyside) is still free as well. With Halton being added to their remit, it's a good chance for a rethink (even if Halton, a borough literally split into by the river, is far more Merseyside than, say, Knowsley). It would put some distance between it and Merseyrail - just check out the Twitter account to see the daily confusion about who people should complain about what to - but I like Merseytravel as a name, just as I like Merseyside.

Maghull "The old station crosses a level crossing, backed by a pub and another precinct where bored boys lined up to buy sausage rolls from the bakery.."

Hi Scott, You missed the residence of Frank Hornby just opposite that small precinct. It is said that he took inspiration for his model train creations from Maghull station.
Great Blog, Interesting read.