For the last few days, my mum has ventured up north for her annual visit.  We went to Southport, and wandered round Liverpool, and in the evening we sat down to watch Emmerdale.  She's a fan, sort of.  As she said herself, "at the end of every episode, I think, 'what a load of old rubbish'.  I don't know why I watch it."

I am, of course, a Coronation Street man, and I've never taken to its stablemate across the Pennines; I still call it Emmerdale Farm because I am just that hilarious.  Anyway, we were watching the programme, and Colonel Feyador from The Living Daylights had a row with his boyfriend, Billy Corkhill from Brookside.  Billy stormed off in a huff, and I went from my only half-interested state to full rapt attention.  Because where did Billy go? 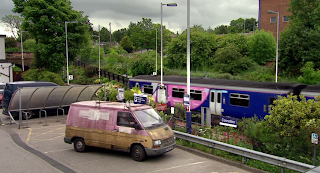 Only a bloomin' Northern station, that's where!  I was immediately searching for clues to where the fictional "Connelton" station was being filmed.  The signs had been replaced by those very non-corporate fake ones - close, ITV prop department, but that's the wrong font - so I had to hunt for clues, like Anneka Rice with a bigger arse. 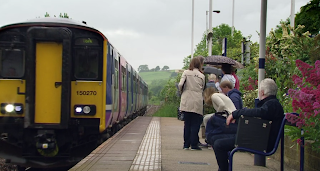 Emmerdale is filmed in Leeds, so my first thought was that it was somewhere nearby, but the benches were purple.  In West Yorkshire, the platform furniture tends to be red, to match the WYM corporate look.  This was Purple Gang all the way.

As I wracked my brain, I tweeted in a panic:

I have a terrible memory for names, but a bang-on memory for places.  People will often, when hearing about the blog, ask me questions about their local station, or their favourites, and I often respond with a blank look.  "What did you think of Castleford?" they'll ask, smiling.

What you need to say is, "what did you think of that station near a quite shitty Wilko's?"  That works.  I'll give you a monologue then.  The names vanish into the background but I can trace entire journeys in my head, even at a few years remove. 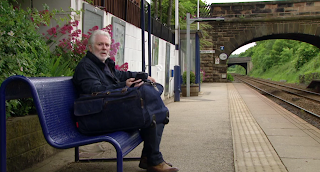 The scene continued.  Billy Corkhill threw his mobile phone onto the platform, smashing it - an act of littering I cannot in any way condone, because I was brought up right - and then he got on the train.  In almost the last shot of the episode, we got the view I wanted: 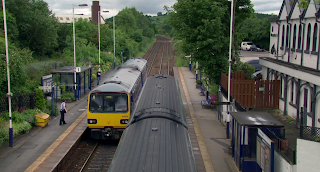 That big white building on the platform; that was the familiar part, the curiosity that made the station different.  It was the old station building and it was converted into something else.  I ran through my mental rolodex, flicking past memories, picking them up and rejecting them.  For a while, I thought it was the station where the building was devoted to an IT firm, and I'd gone down into the village past a churchyard with a plaque to the local MP, and there was a gents' toilet that was kept going through public donations; I came to the blog and did a search and found that was Gargrave.  Wrong bit of the country.

I went back to the picture on the screen, now frozen, and rammed my face up against it.  My mum watched, half-bemused, half-concerned.  The signage on that building looked green - it was a Co-op!  It was that one where the road went over the track at an angle, and I'd had to dance around a bit waiting to take the sign pic because the supermarket meant there were always people about, and then I'd gone out on the Princess Royal bypass - I remembered the Princess Royal part distinctly.  It had been cold, and crisp; wet legs because there wasn't any pavement, freezing ears.  Barking dogs in a kennel as I walked past.

I searched the blog again and there it was: Pannal.  Pannal station.  North of Leeds, on the line to Harrogate.  February 2015.

I breathed a sigh of relief.

Then I checked my mentions and found that Twitter user @MissEllis15 had already answered the question for me and I hadn't noticed:

This is why you should pay attention to your mentions, people.  It can save you a lot of hassle.

(Incidentally, and I hate to be that person, but in getting the screengrabs for this post I noticed that train number 150270 arrived at the platform, but when it took Billy Corkhill away, it had turned into train number 150228.  I am both very sorry and also very anxious because I'm pretty sure the comments are now going to be full of people telling me that trains can be both 150270 AND 150228 and I should stop trying to talk about trains and get back to listening to people's conversations in cafes and making smutty remarks). 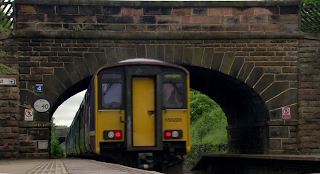 It's two 2-car trains coupled together, so it's perfectly possible that the front train was 270 and the rear 228. Although, given the way TV seems to work, it's equally likely that the scene of the train departing was filmed two weeks later than the first part and edited together later.

I'm still reeling from Merseyrail allowing Hollyoaks to stage one of their frequent murders on a train from Southport... sorry, Chester South, recently.

I don't follow Emmerdale Farm (which I too still call it) but on the subject of continuity I have just noticed on your screencap the Dingles' old Renault Trafic seems to have changed into the facelifted 1990s shape whereas last time I saw the programme it was definitely the original 1980s flat-fronted shape. I guess Dingle van No. 1 died and the props people assumed the audience to be blind to such details.

This is all A1 nerdery, and I sincerely applaud it.