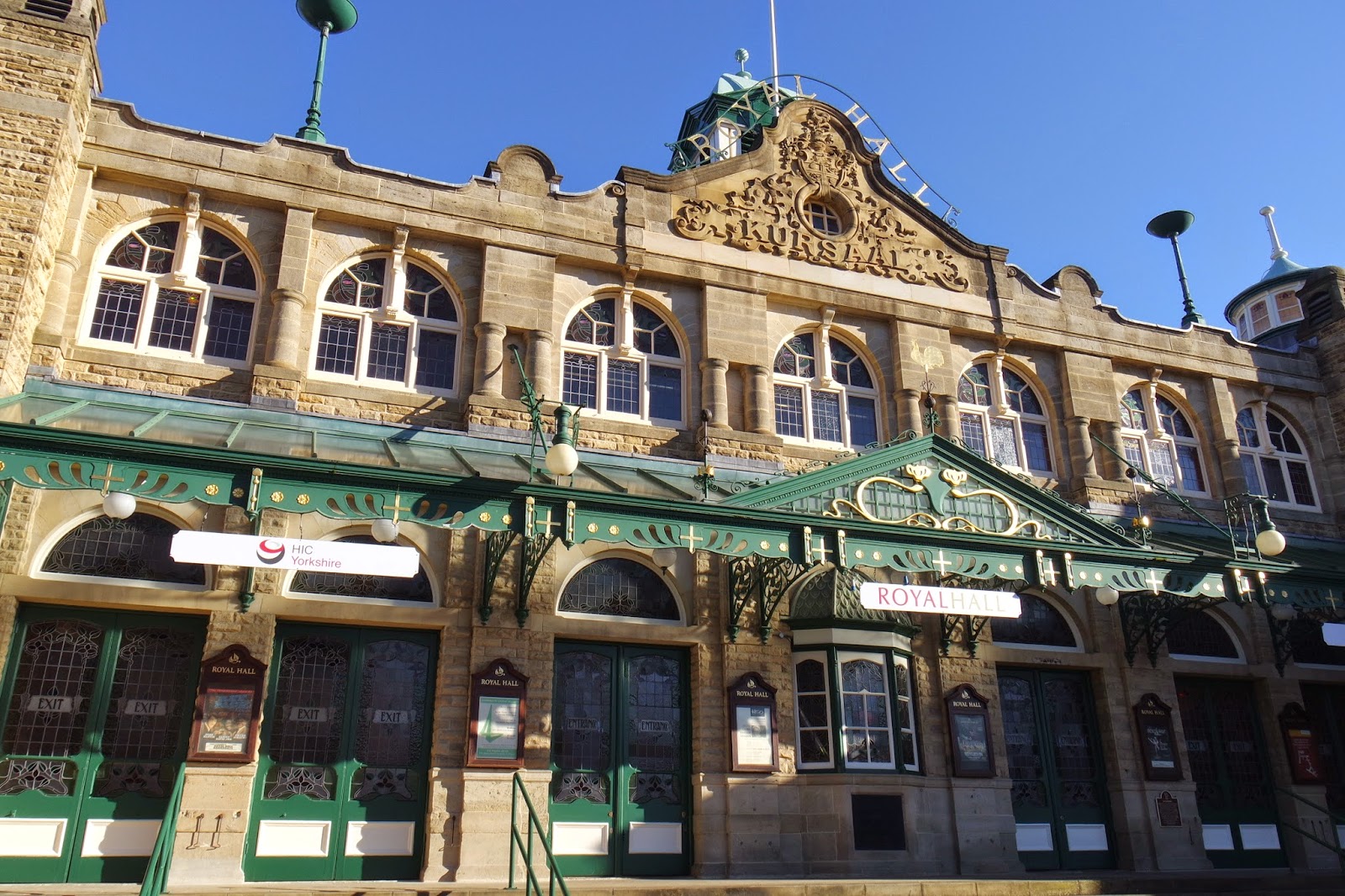 Harrogate's nice, don't get me wrong.  It's very nice.  It's cuddly Auntie nice; it's Sunday afternoon nice.  It's just not very sexy.  It's a regular on the "best places to live in Britain" lists, but I have a feeling I'd be bored by the end of the week.

I walked up into the town centre, past the Turkish Baths.  It was a bit early for me to get a rub down from a burly Anatolian, and besides, it seemed to be rebranded as a "health spa" with a distinctly feminine vibe.  When it was built, it was probably full of grim faced industrialists doing power deals during massages.  They'd have continued sucking on their thick cigars even in the sauna.  Now it offered "alternative therapies", and I could imagine them spitting out big lumps of tobacco in disgust. 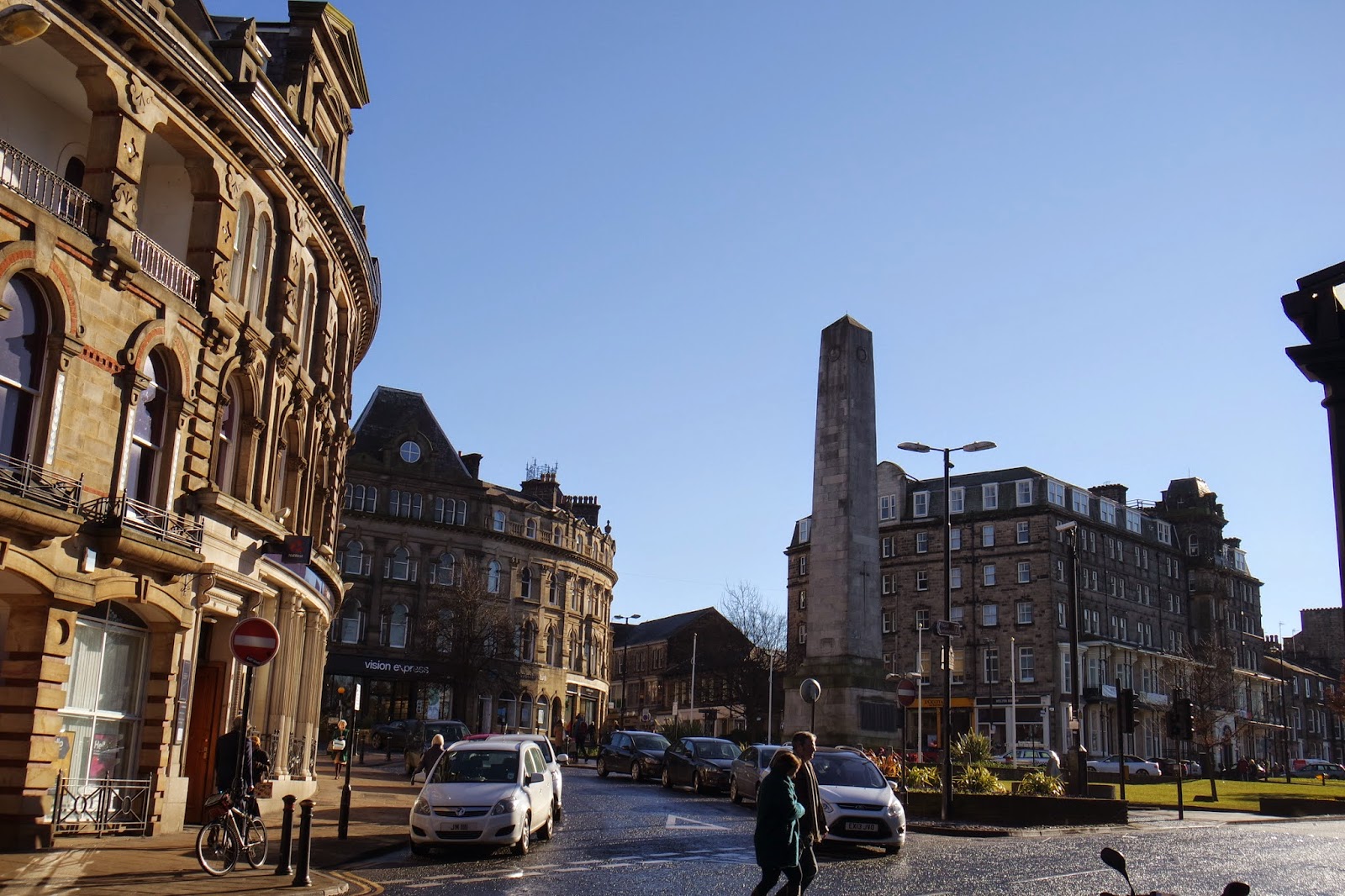 Alongside an impressive war memorial, I found one of Harrogate's icons: Betty's Cafe Tea Room.  Opened in 1919, the tea room has resolutely refused to move out of the Jazz Age.  The waitresses still wear black frocks and mop caps and the display in the window contained enough sugar to rot the teeth of a thousand children.  There was no concession to the current trend for talking about sugar as if it is worse than Hitler; if you went in and asked for a gluten-free sandwich you'd probably get turfed out on the street. 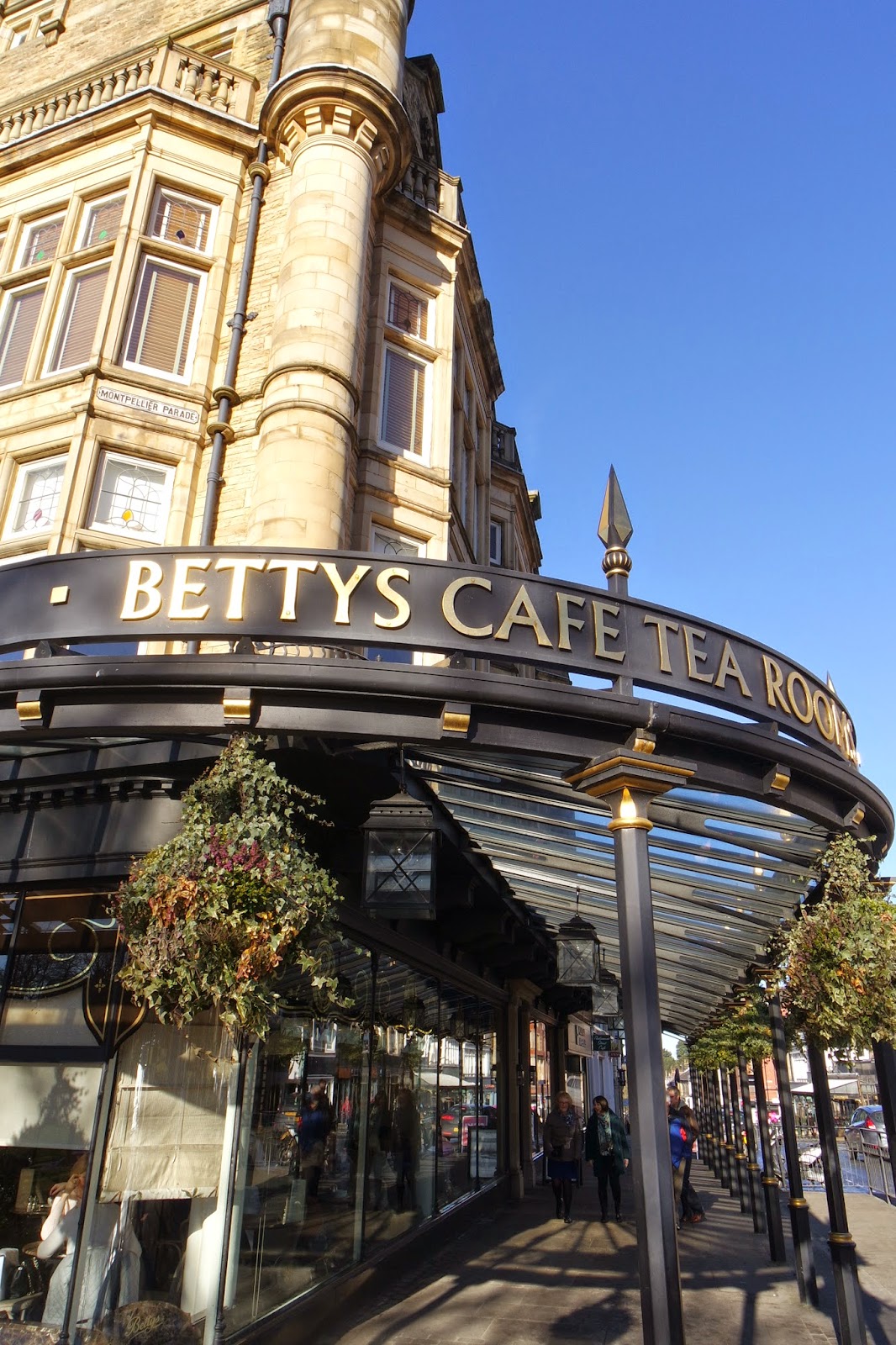 I didn't go in.  I was wearing jeans, for goodness' sake.  I may as well have waved the Red Flag.  Even a group of sprightly looking pensioners who'd met outside looked nervous about going in; they debated whether they should lunch somewhere else, and I like to think it's because even they didn't feel grand enough for it.

Beyond Betty's was a grand avenue with parkland sliding down the hill.  If you want to know just how posh Harrogate is, the local council had marked out a space in the parkland and hung up a banner headed "sport for all!".  Underneath was written, "Play Petanque here!".  Because of all sports, petanque is the most inclusive; how many young boys have scrabbled to get out of the ghetto via the big petanque leagues, with only a boule and a dream to sustain them? 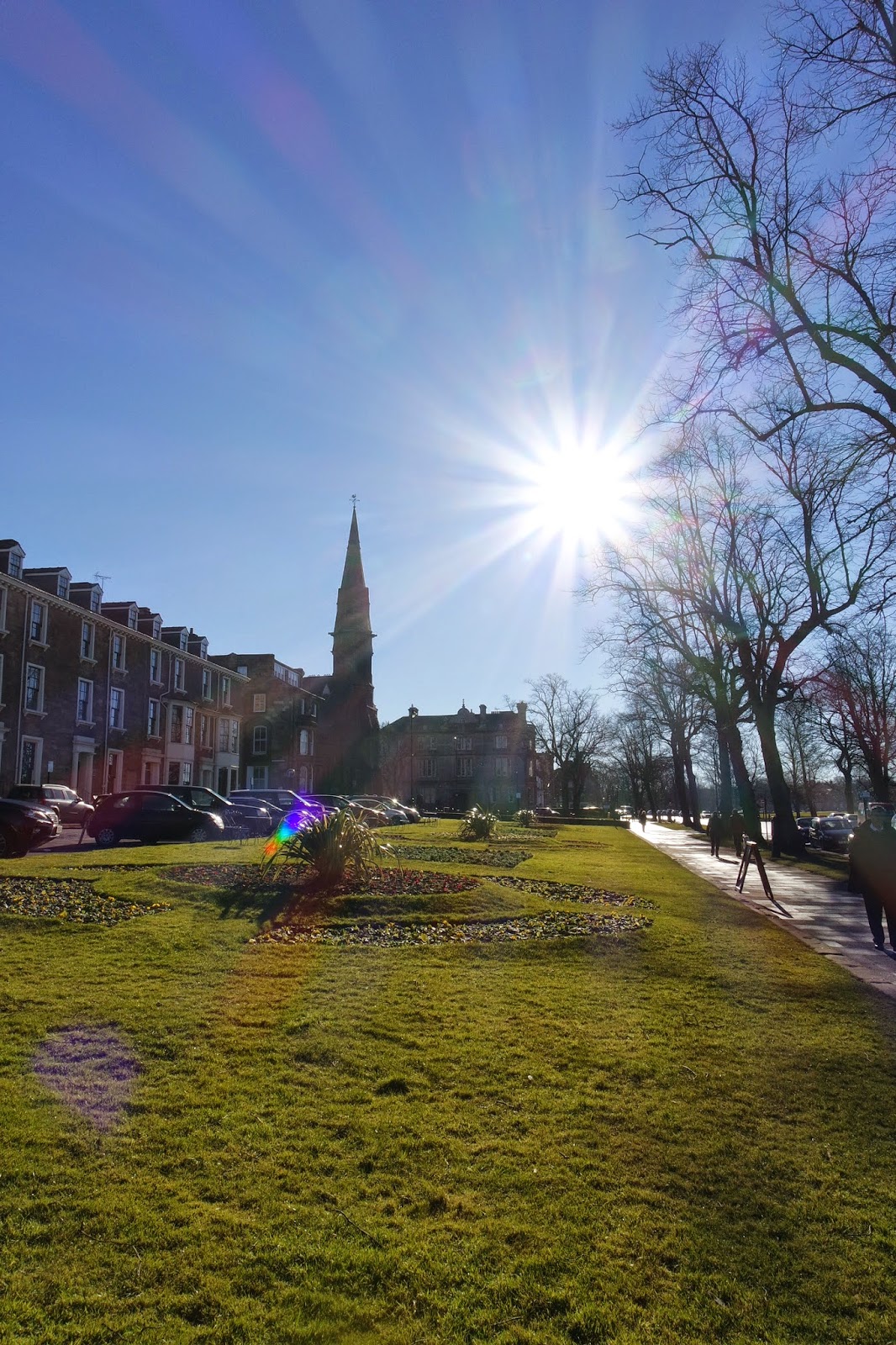 There wasn't a single football pitch in that park.  Just saying.

I crossed back over the avenue and headed into the shopping streets via Victoria Avenue.  The offices here were for legal and professional services; financial advisers, solicitors.  Outside the magistrate's court, two youths bowed their heads and vaped furiously. 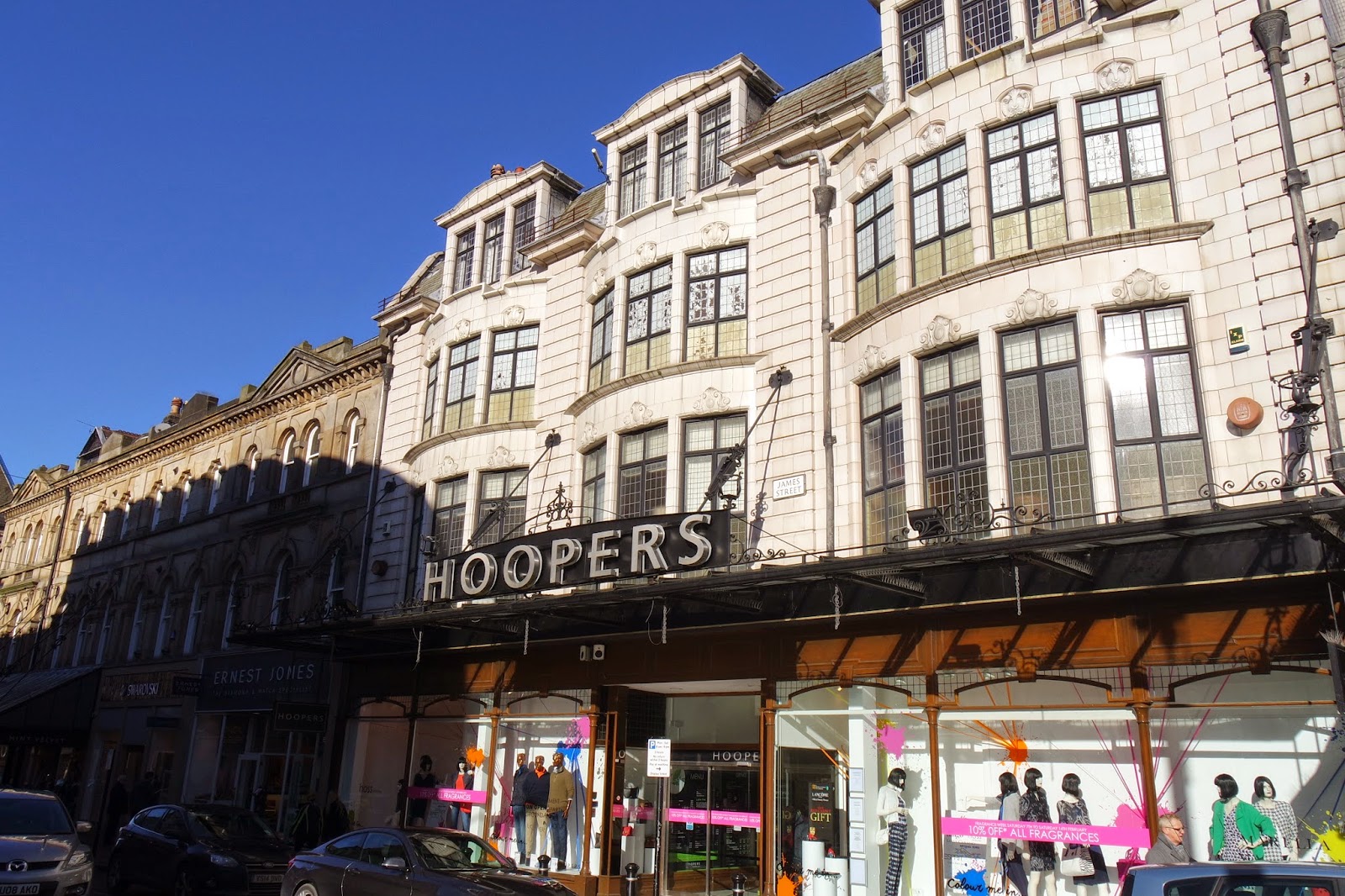 The pretty Art Deco frontage of Hoopers Department Store drew my eye, and carried me into the pedestrianised area.  I stopped at a little card shop to buy two Valentine's cards; I need two because I'm just that much of a stud.  Not really.  The BF and I met on the 12th February 1997, and so we use that as our "anniversary".  It's handy because it means there are loads of cards expressing nauseating emotions in the shops, so we don't have to bother coming up with our own; a second will do for Valentine's Day itself.  I'm always disappointed that the shop assistant doesn't comment on me buying two.  I want to boast that I have two lovers on the go at once, though I know they'll take one look at me and find it hard to believe I have one.

I was back on Station Parade, where it seemed Harrogate had decided to store all of its bad 1960s planning decisions, like the spare room you have full of papers and old CRT monitors and bits of wood that might come in handy for something, someday.  The buildings here were concrete slabs mixed in with car parks, though a Waitrose signalled that things were going to get better very quickly.  I crossed York Place alongside a middle-aged man and what was clearly his second wife and child and walked into The Stray, an expanse of open greenery surrounded by majestic villas. 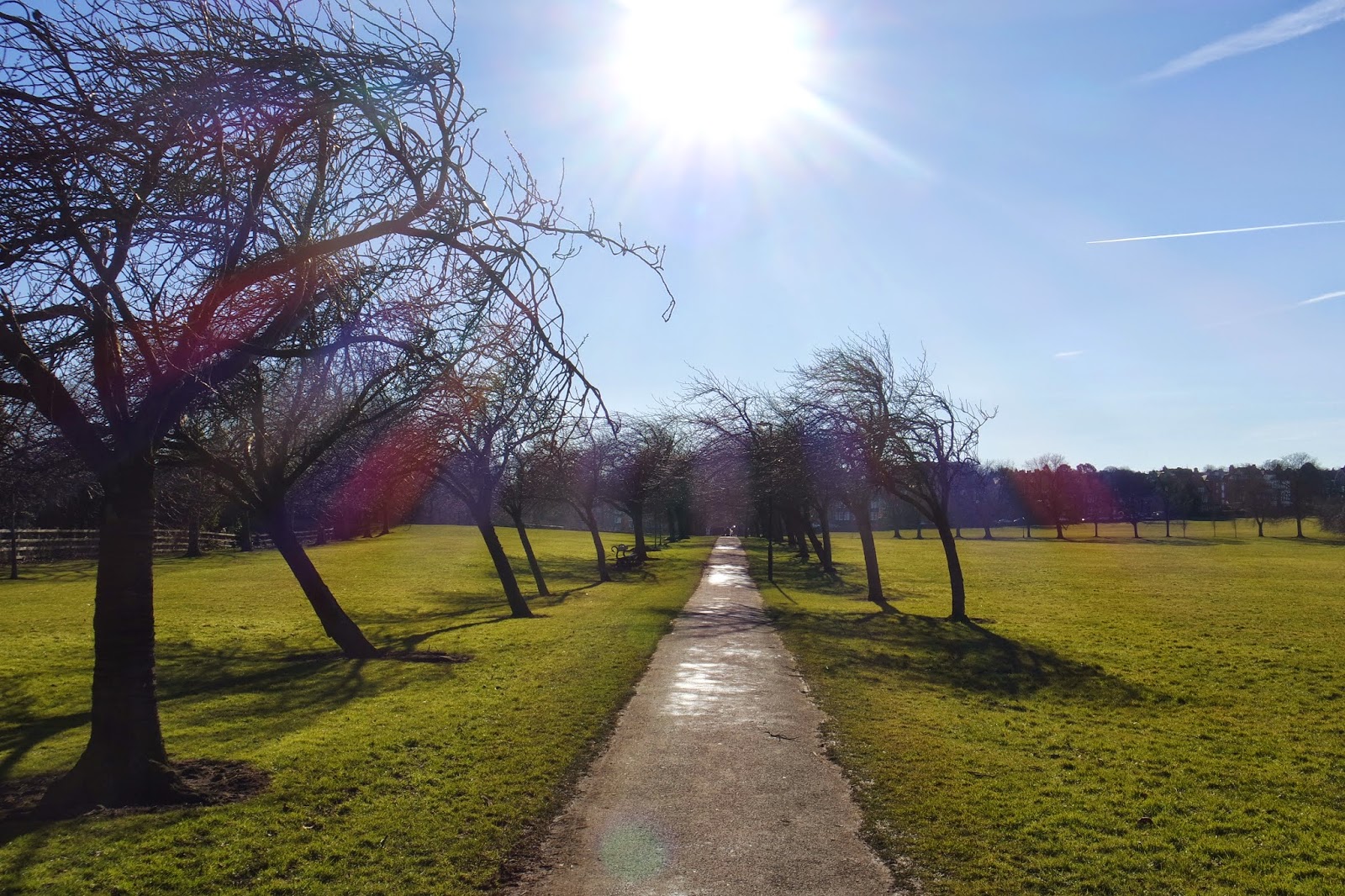 The Stray is bisected by the railway line.  It runs in a cutting just below the surface of the park, fenced off for safety.  I walked in parallel to it, pausing only to look at the Tewit Well, the earliest of Harrogate's springs, now covered with a fake Grecian temple. 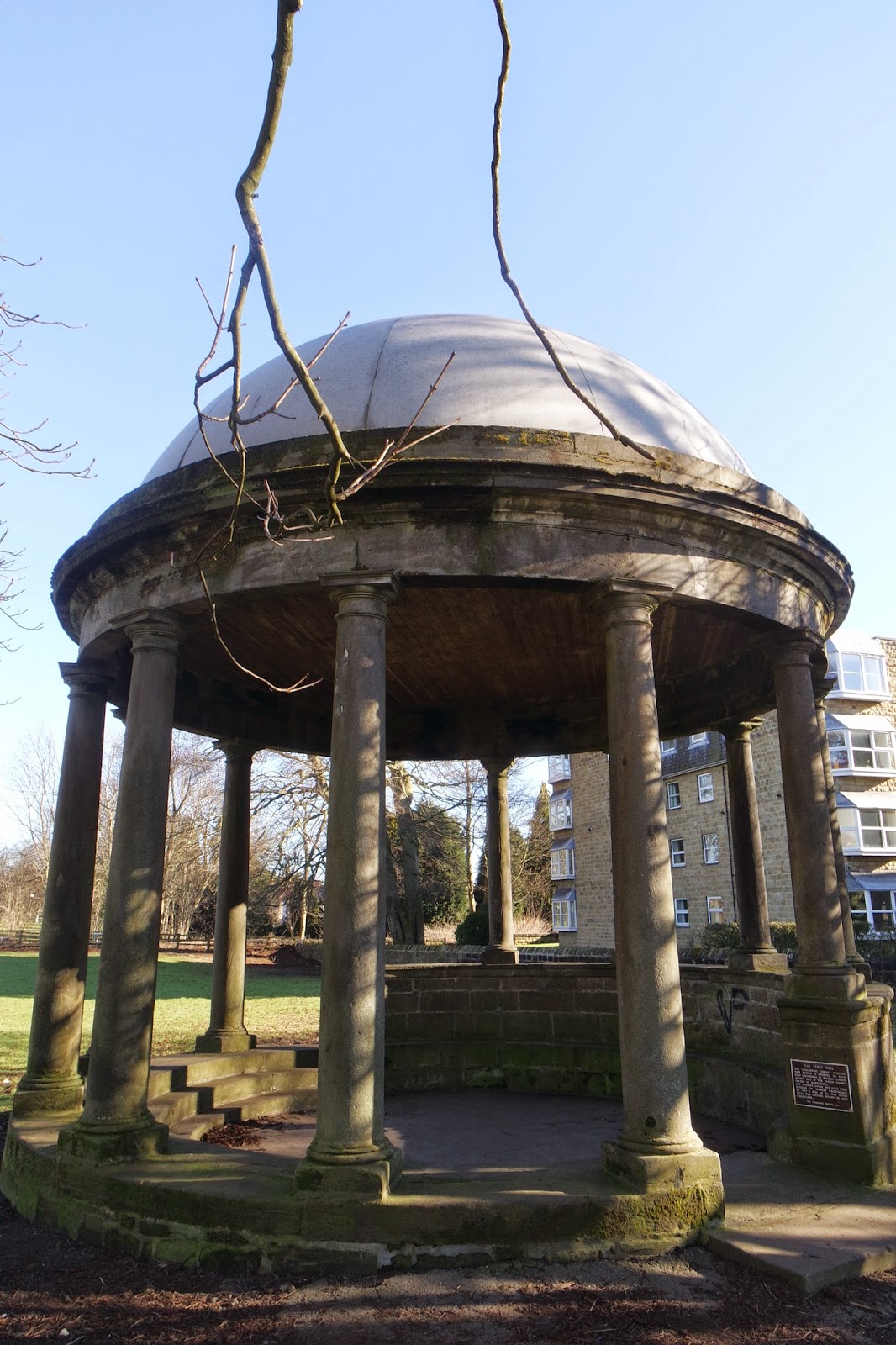 Beyond the park were more modern 20th century avenues.  They were wide and discreet, lined with semi-detached homes that housed the Yorkshire equivalent of Terry and June Medford.  I could imagine the soirees, the games evenings, the barbecues, the awkward silences when one husband has too much to drink and misinterprets the pretty single mum's harmless flirtation as an invitation.  It was a place where you'd still have to drive slowly in case a ten year old barreled out of a side street on his bike. 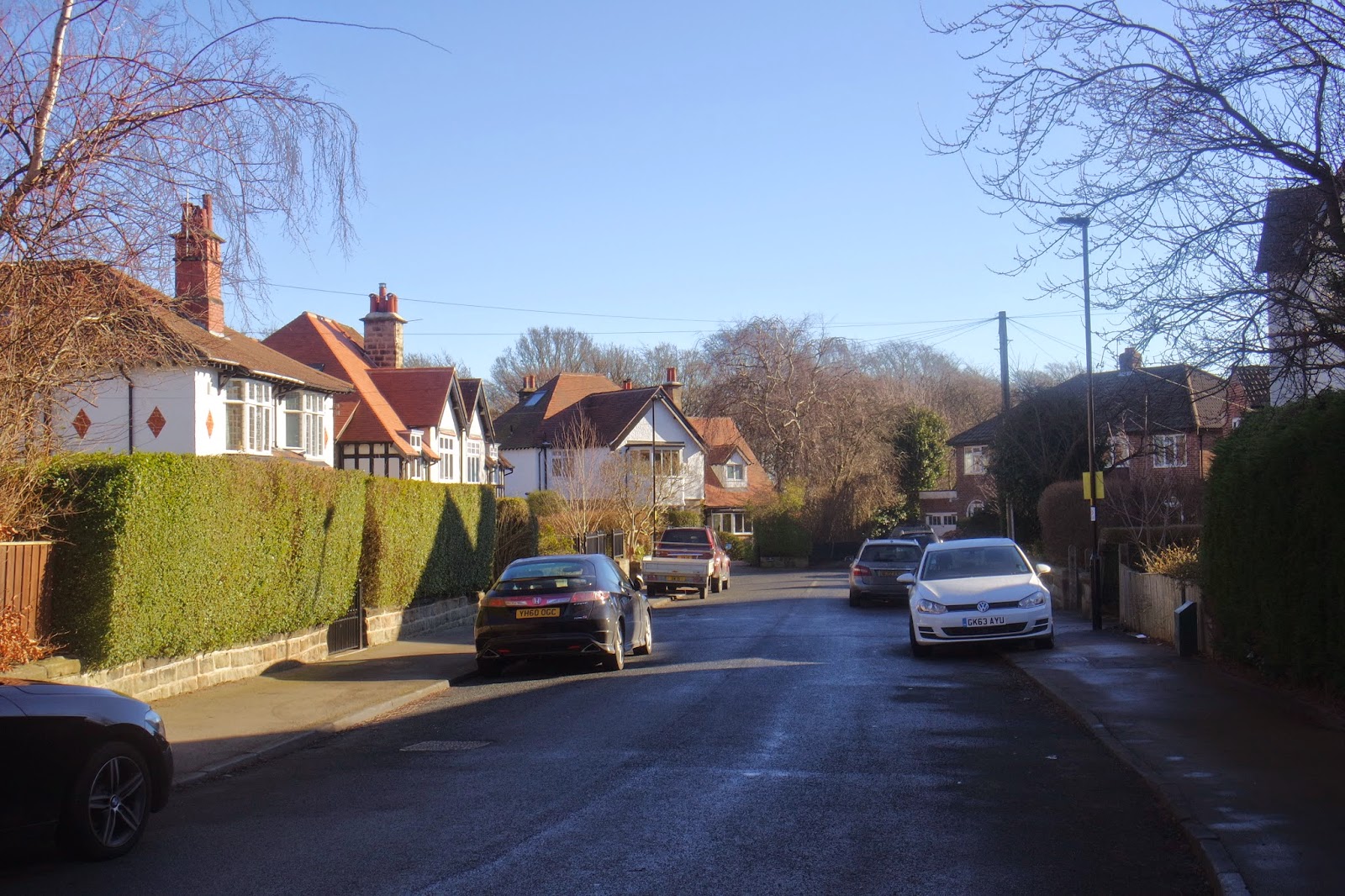 The main road was noisier and busier, and a little further down the social scale - there was a Fultons Foods - but a large M&S Simply Food indicated we weren't quite in Aldi-land.  I turned left, past a bickering couple (he'd arrived too late and made her hover by the side of the road for ages) and along Hookstone Road.  The local college had broken up for lunch, and a group of boys kicked a football among themselves as they walked down the street and into the recreation ground. 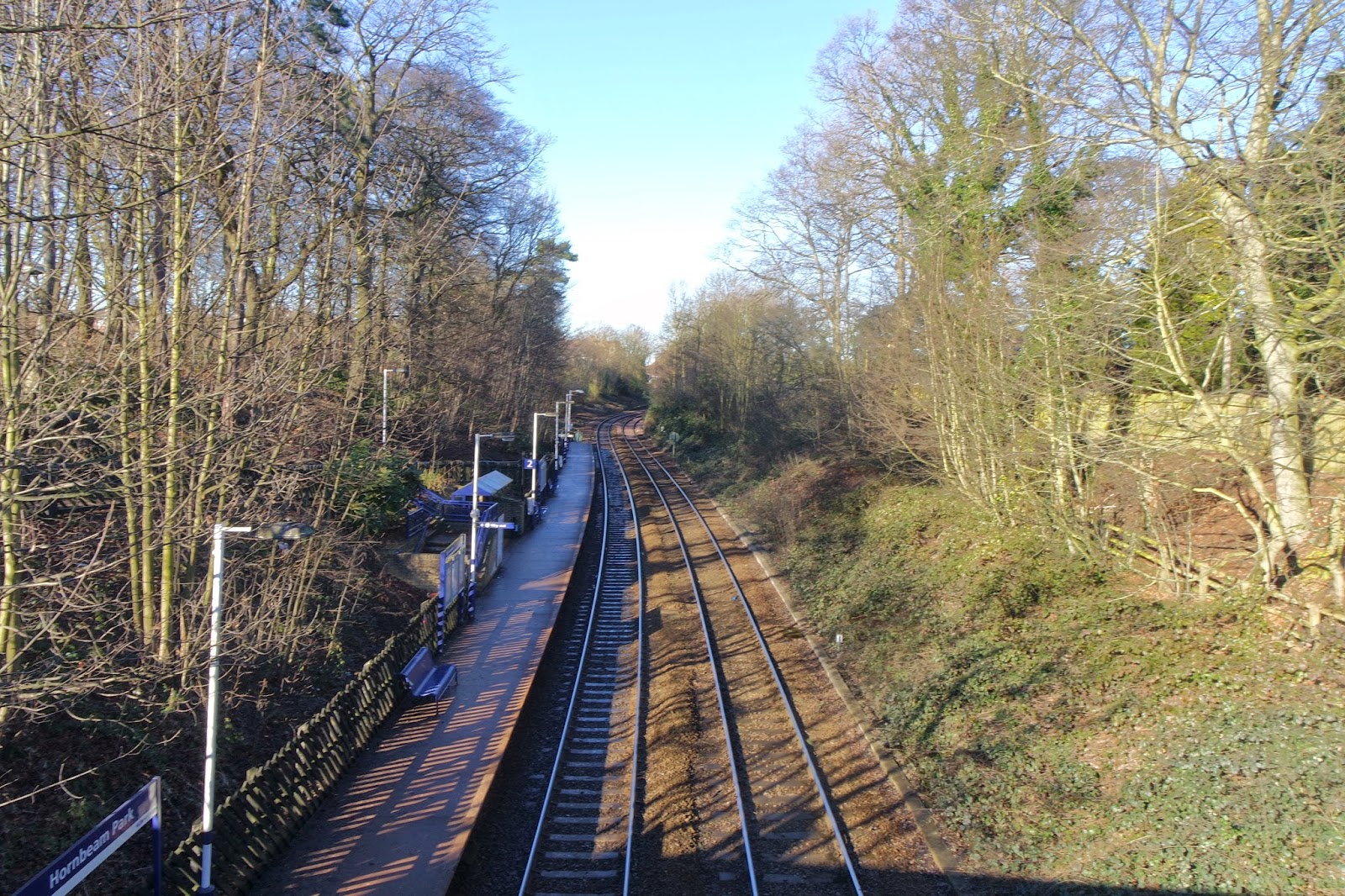 Hornbeam Park station sits either side of the road bridge, with separate entrances to each platform.  The northbound one was wet and in shadow from the trees, while the southbound got the car park and the ticket machine.  Easy to see where most of the travelers were headed. 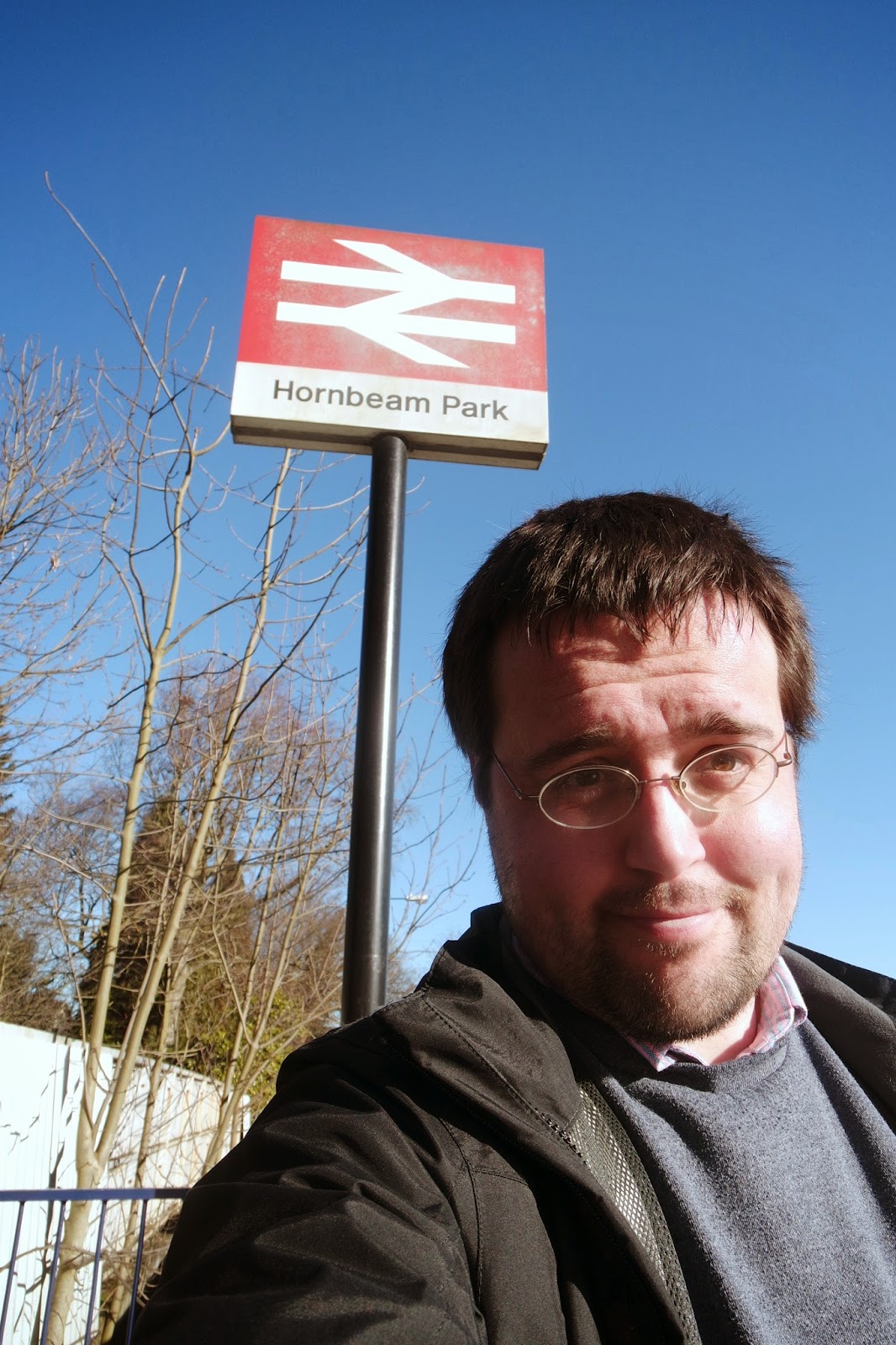 The platform slowly filled up, and a train arrived to take us in the direction of Leeds.  The girl across the aisle from me went to buy a ticket from the guard, starting with "the machine was broken".  I wondered why she even bothered with the lie - she'd just walked right past it, and the other passengers who boarded at Hornbeam Park had tickets.  To his credit, the guard didn't say, "Oh, reeeeeallly?" as I would have done, and sold her the return to Leeds with a nod. 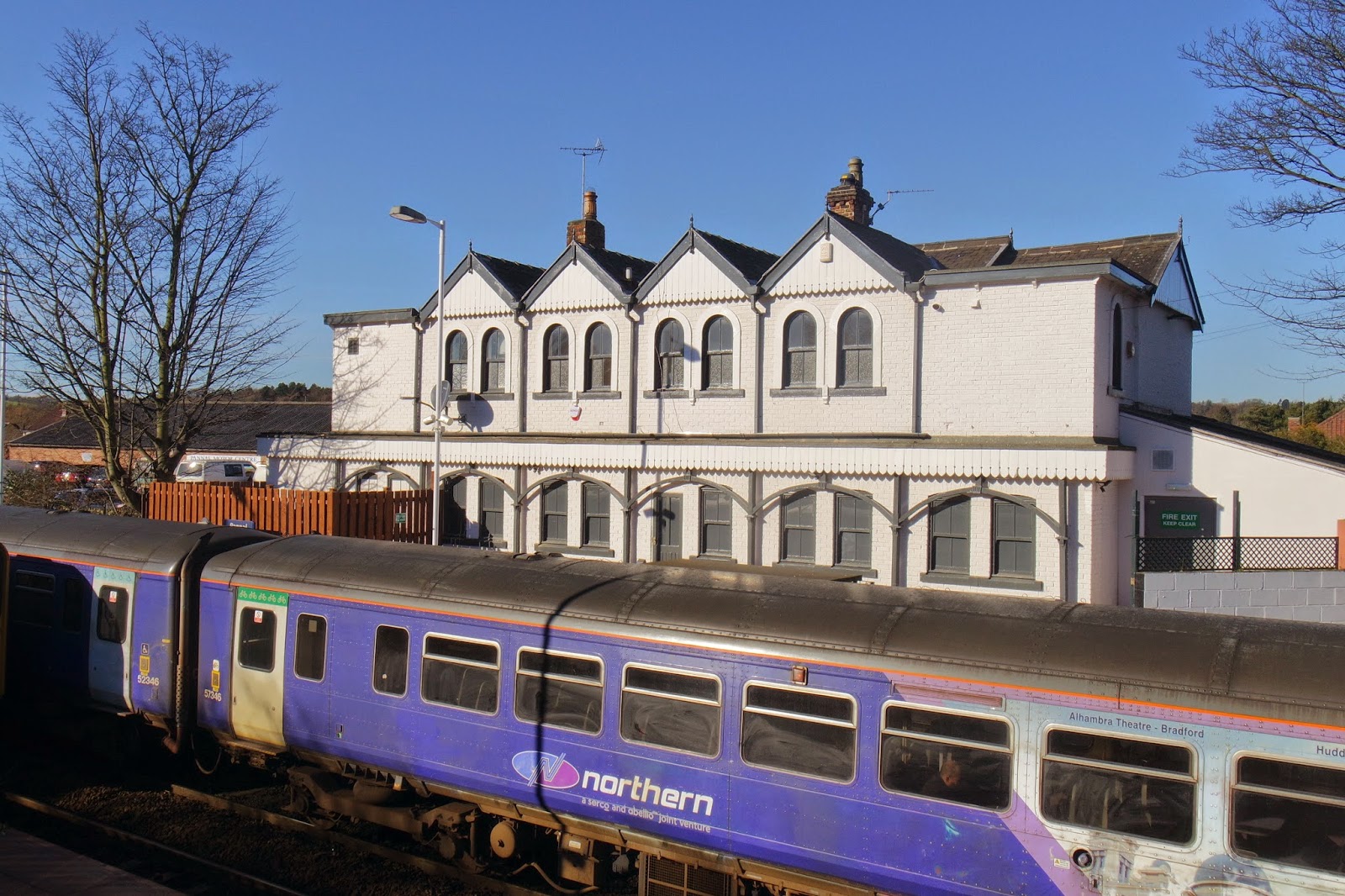 Pannal has a lovely station building.  It overlooks the tracks, prettily painted, impressively sized.  Of course, it's not actually used for railway purposes any more - it's a Co-op. 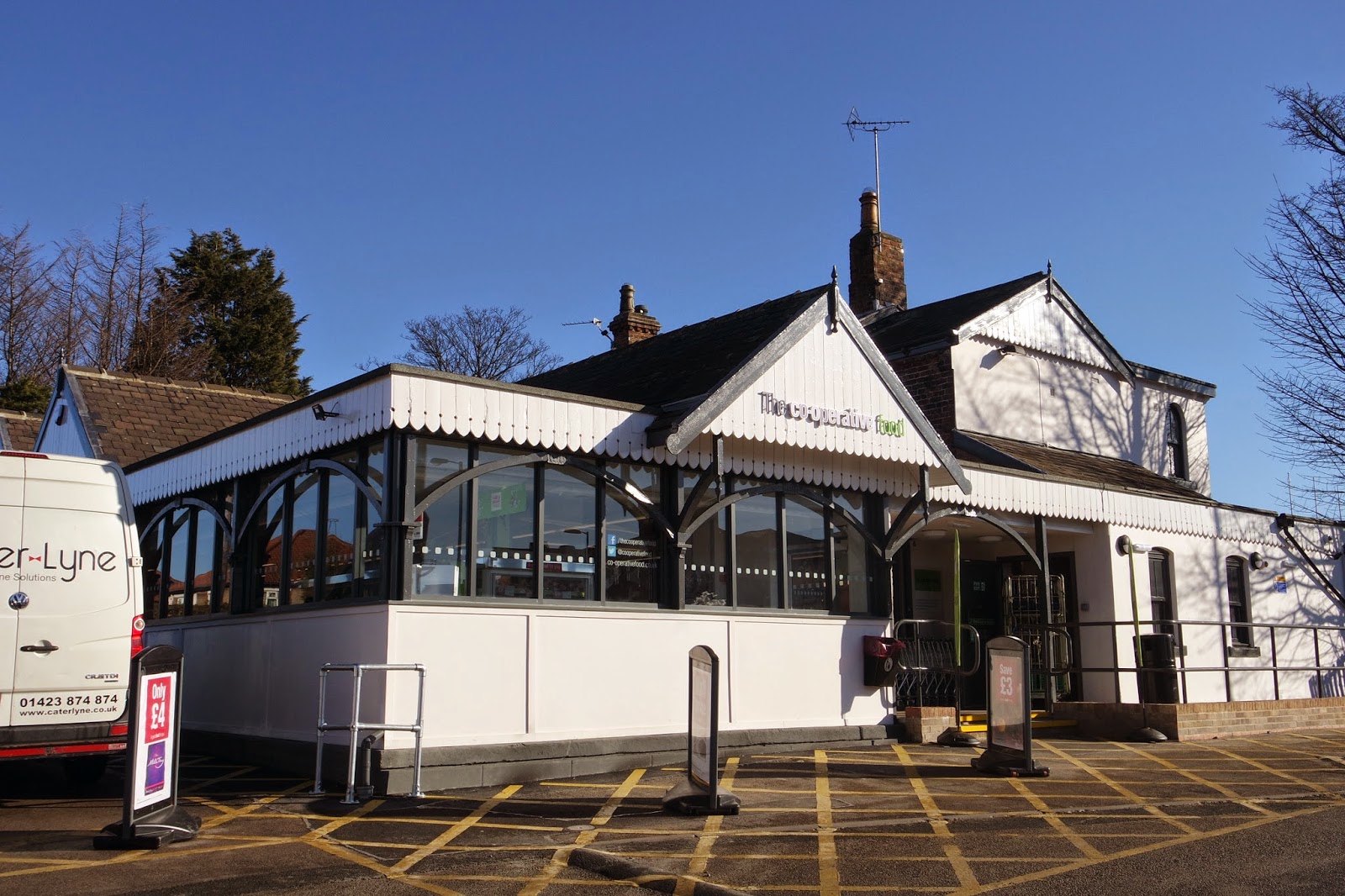 Part of me would like it if they'd demolished the whole thing and built a brand new supermarket on the site.  Leaving it there seems cruel somehow. 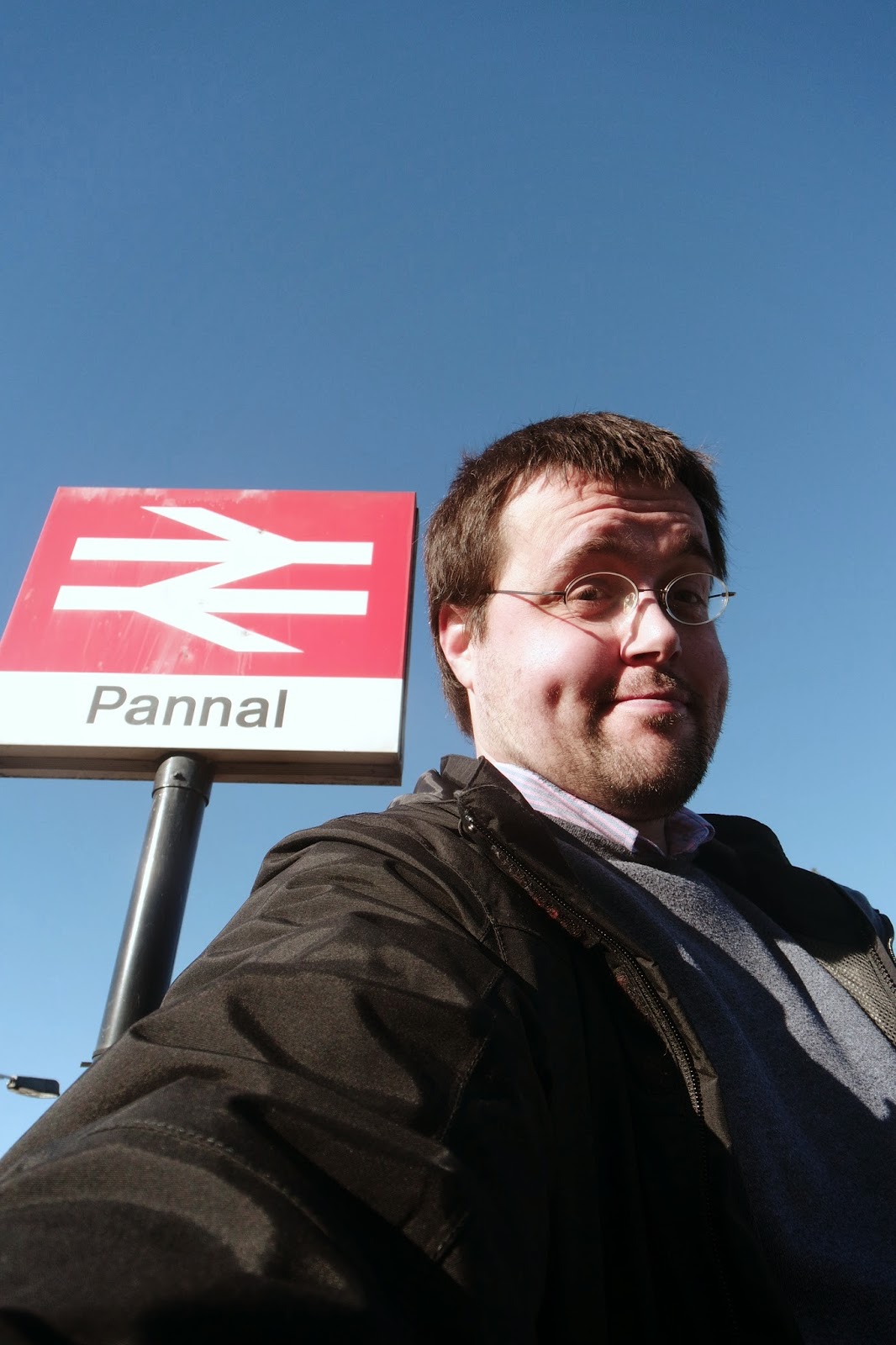 I scrambled up to the main road, the uninspiring Princess Royal Way - I'd have loved to have seen Anne's face when they told her they were naming a bypass after her - and trekked out of the village.  Errant tree branches slapped me in the face and thorns snagged at my coat.  HGVs crashed past leaving a swirl of diesel smoke in their wake. 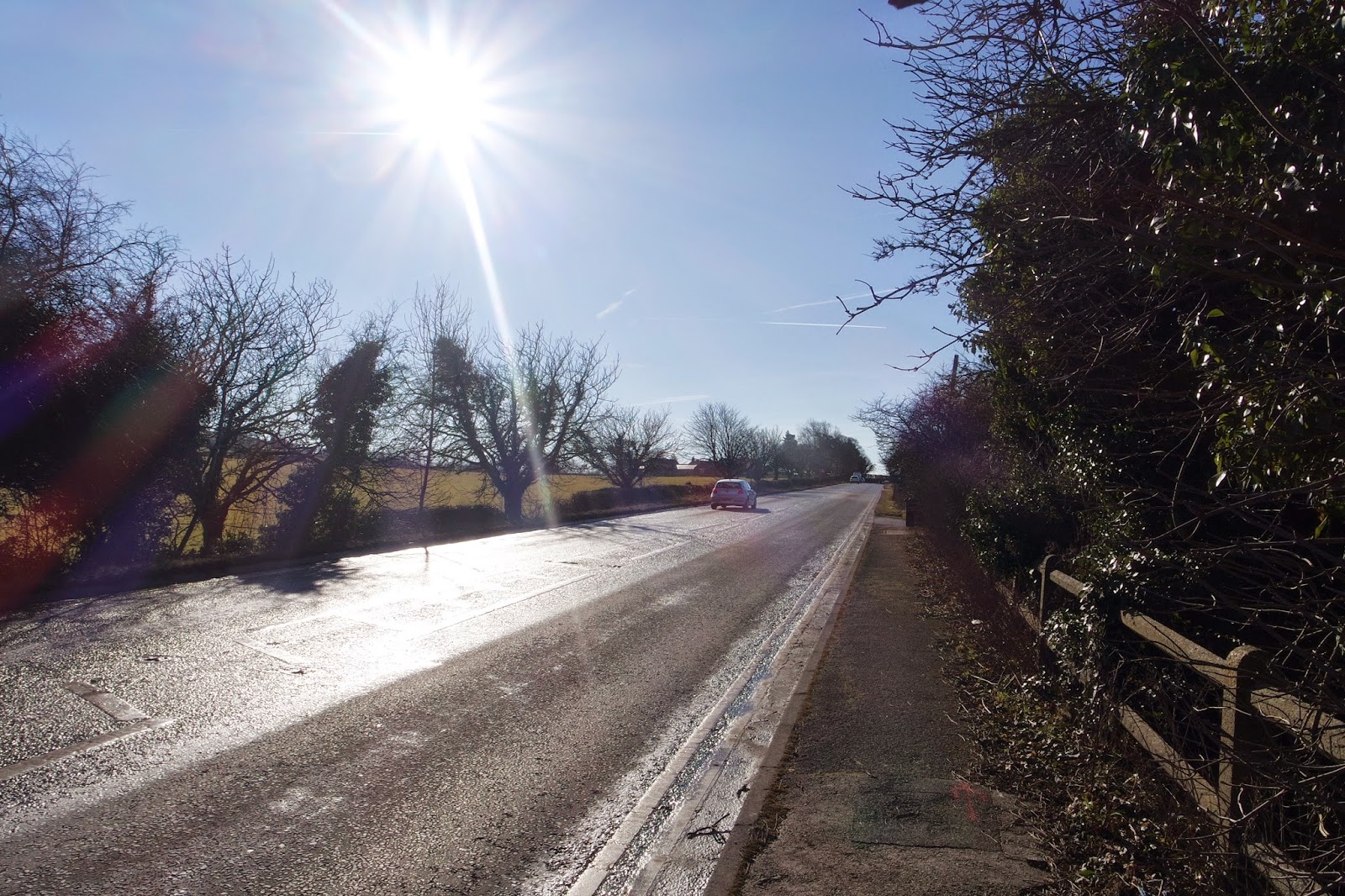 In between vehicles there was a sudden silence, and I could take in the view.  Hills and fields poked over the horizon; birds swung above my head.  Patches of snow still shone on the higher ground.  All beneath a brilliant winter sun. 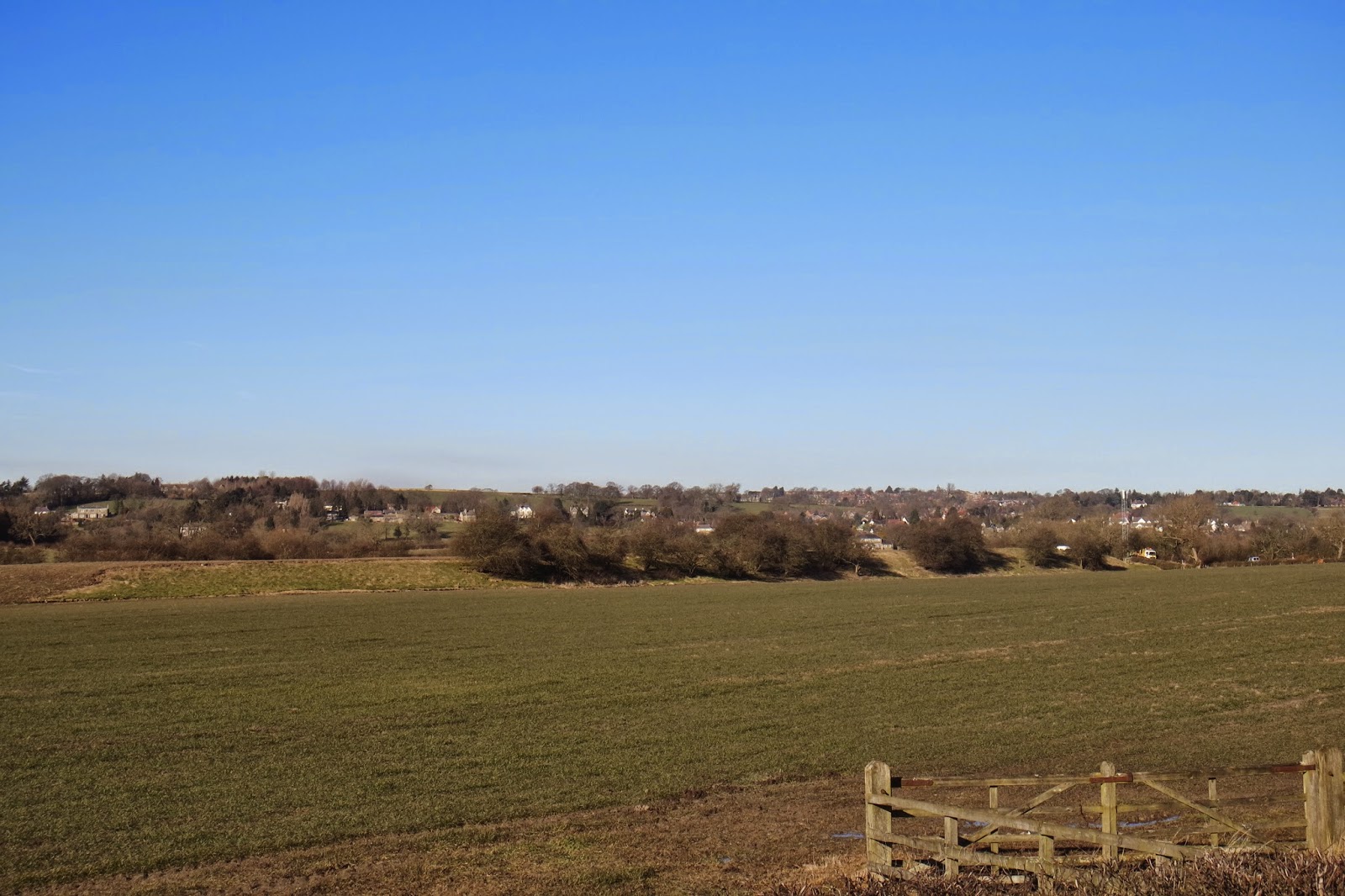 The railway rejoined me, and followed alongside for the rest of my walk.  There would be the occasional swoosh of a train burning through, somewhere off to the side where I couldn't see it.  I was having to walk on the verge now, the pavement disappearing somewhere around a kennel and cattery.  They advertised grooming and day boarding, and there was a constant, never ending soundtrack of barks and yaps. 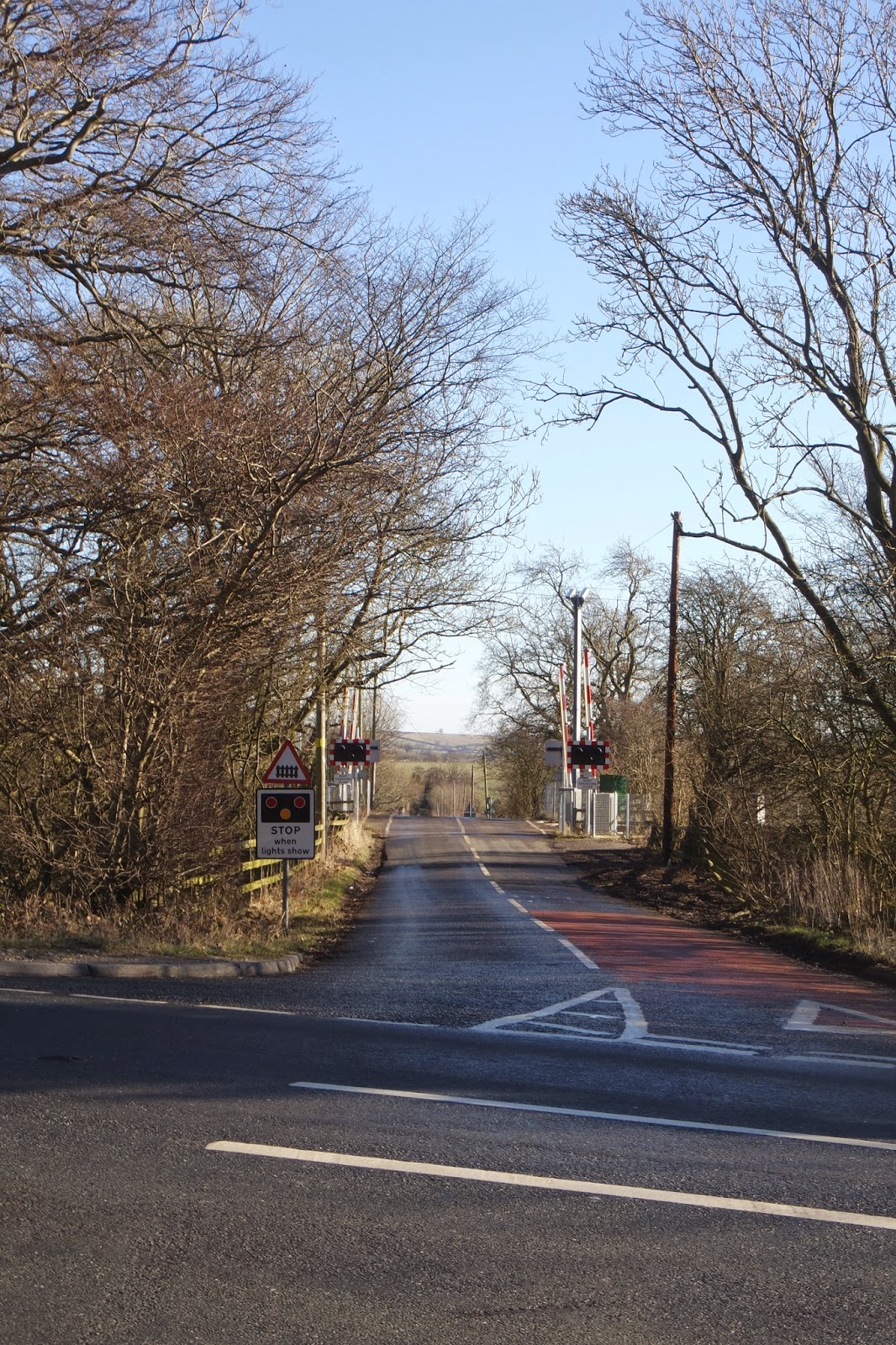 Walking on the grass was fine for the most part, until I misjudged the firmness of a patch and sank up to my ankles in thick wet mud.  My boots were instantly covered with a film of drying mud to give it that "nature hike" look; the new laces I'd threaded in that morning were soaking wet. 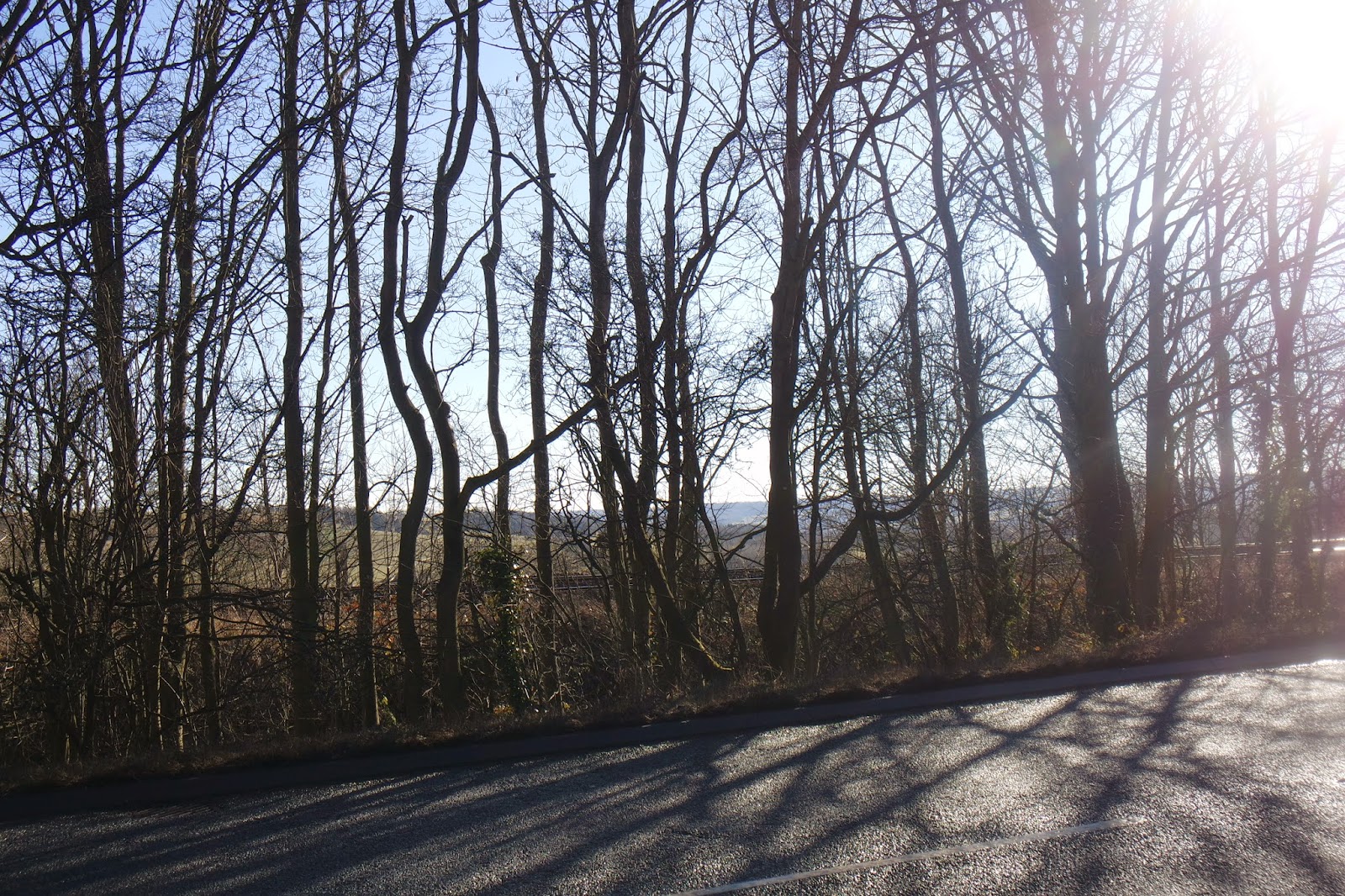 I felt healthy and happy.  I breathed in the country air and smiled at the sight of snowdrops poking through the earth.  It was early February but nature was ready for spring already.

Weeton was a series of large, fairly ugly houses set off the main road.  There was an inelegance to them, built without class, and not nearly as charming as the tiny workers cottages.  The station was almost hidden behind the houses, though the old building had been converted into a couple of pleasant homes.  There was a man in the garden of one of them, mowing his lawn, which seemed far too early to me.  It wasn't spring yet. 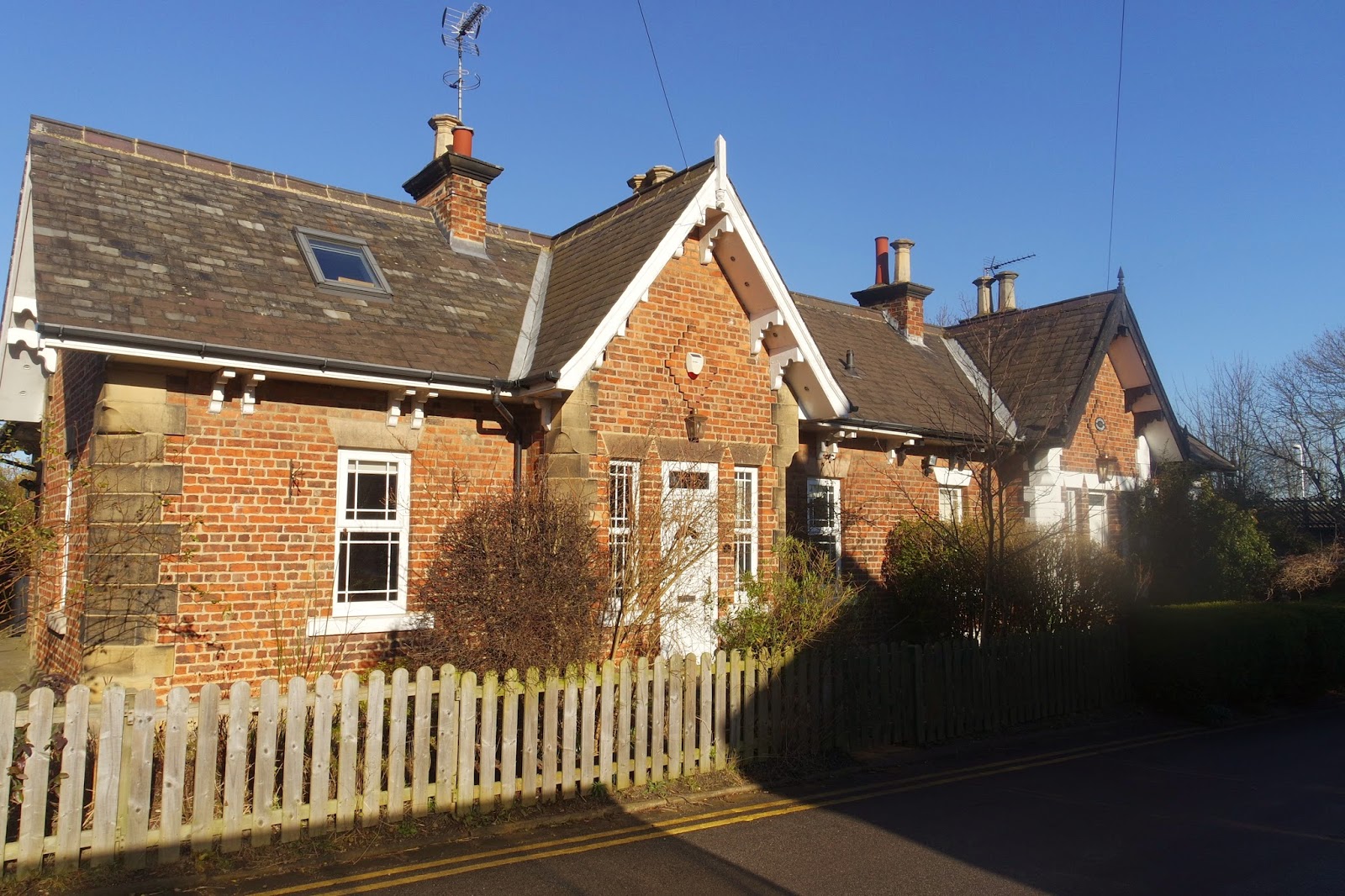 I climbed the steps onto the platform and took a seat.  Weeton meant that I had finished off the sections of the York-Leeds line that were outside West Yorkshire.  These were some of the hardest to get; they weren't covered by any Day Rangers, so I'd had to buy individual tickets for them.  It was a fiddly, expensive business. 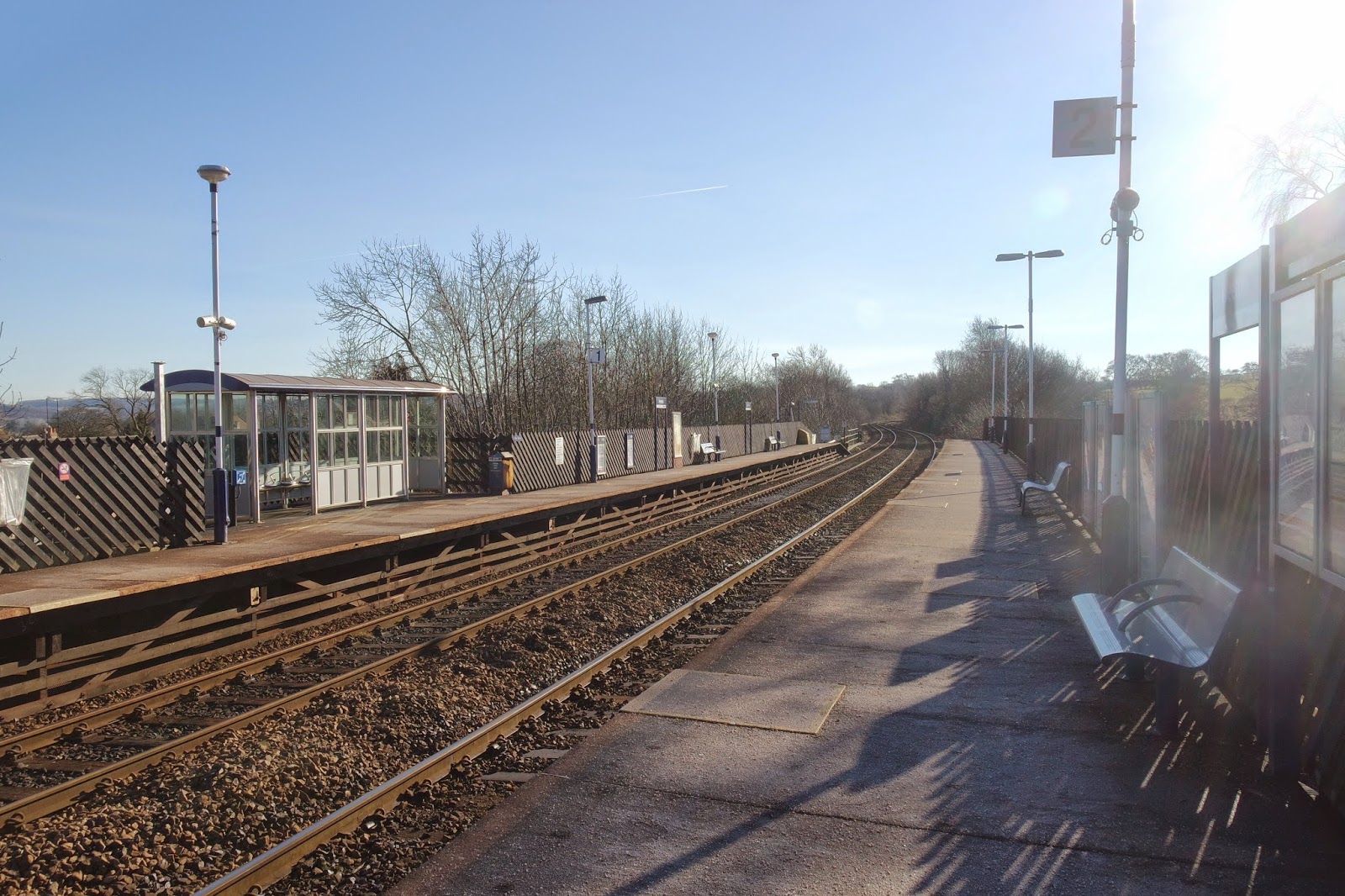 In truth, I was a little disappointed.  Four hours to cross England, and I'd collected all six stations in the same period of time.  It didn't feel enough.  I'd not been annoyed or outraged by anything, but I hadn't been filled with ecstasies either.  It had just been there.  It had all been so nice. 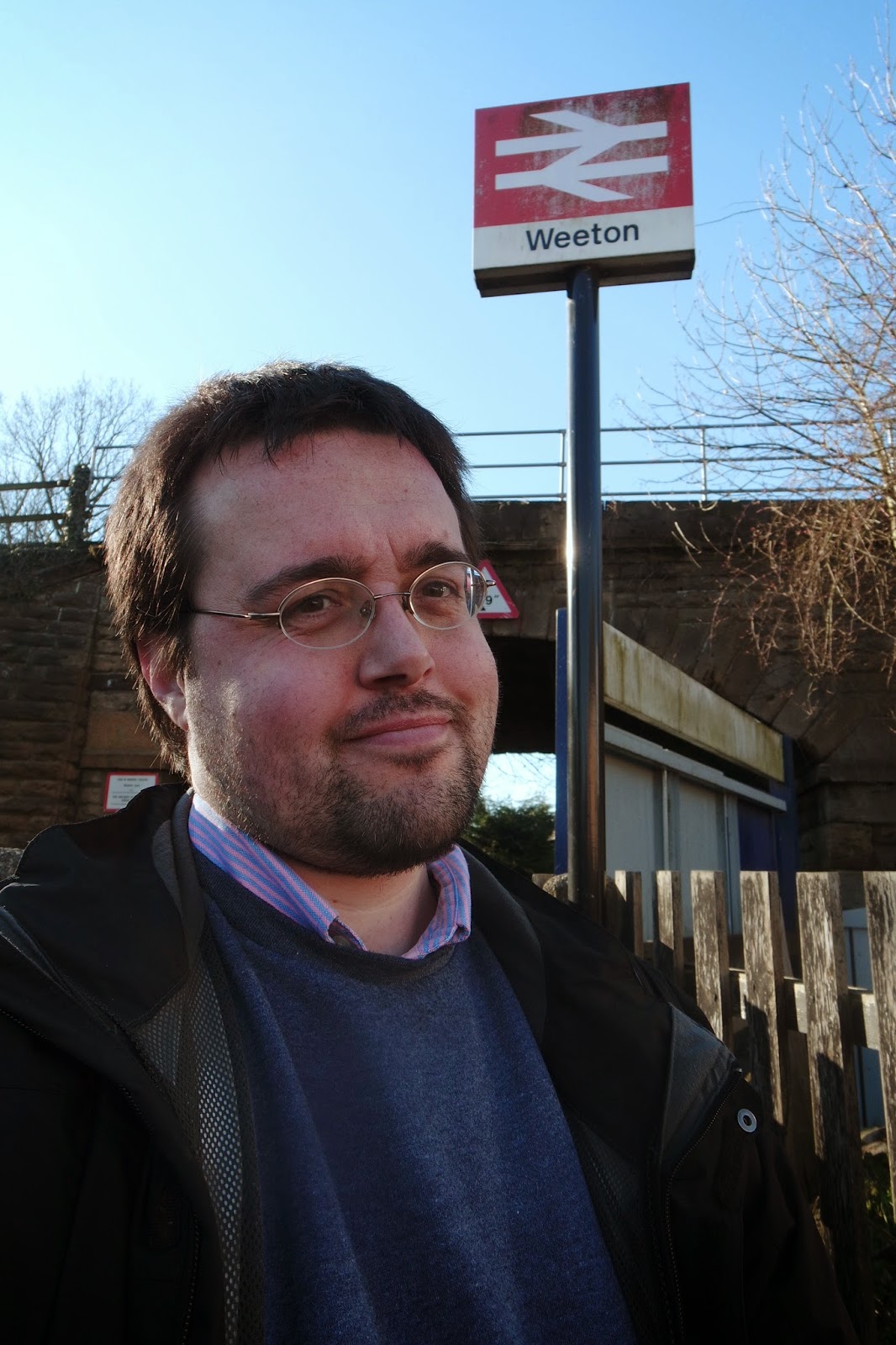 Shame you didn't take a route to see this between Hornbean Park and Pannal.

(will that link work?)

The link didn't come out at the right place :(

Great write up as always Scott :)

Bit off topic, but have you seen this: