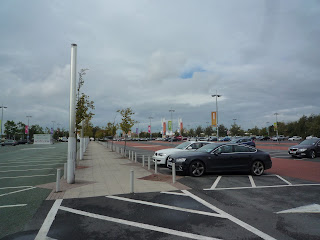 Everywhere I looked there was tarmac.  Acre after acre of open, naked surface.

I get it.  I get that retail parks are incredibly convenient.  I was at one just last week getting a new iron.  I looked in Comet, I looked in Currys, I looked in Tesco Homeplus.  The parking was free, it was close to the store, and there was plenty of choice.

Stood in the centre of the Junction 32 Shopping Park, without any reason to be there, all I felt was emptiness.  I looked all around me at vast, ugly sheds, prettied up at the front with a bit of branding, but basically just four tin walls and a roof.  It was utterly devoid of soul and inspiration.  This wasn't a place to enjoy shopping.  It wasn't like Liverpool 1, where you can promenade, stop for a coffee, have a meal.  Meet your friends.  This was a naked, soulless money extraction system. 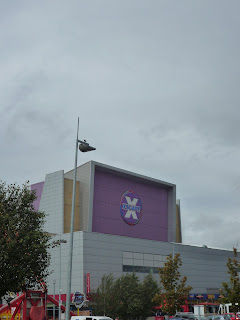 The Mount Doom of this particular Mordor is Xscape, a purple and grey affront to the English language.  It's a cinema, an indoor ski slope (sorry - a Sno!Zone), a bowling alley.  It's got a Lloyds No 1 and a Subway and a Nando's.  If I was 14 I'd have loved it.

On the plus side, it's easy to get away from.  Glasshoughton station was built in 2005 and is connected by bridges to Xscape's car park (though if you're a station user you have to park on the other side of the tracks).  It looks pretty impressive from the street because of the massive stone walls.  Next to the plasticky leisure centre over the road it looks like something built by Sir Christopher Wren. 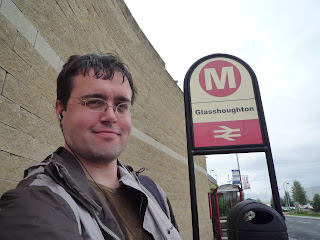 If I look a little disconcerted there, it's because a man got off a bus right behind me, walked past, and full on stared at my photo taking.

The reason for the high walls is because the station was done on the cheap.  Again, there's no station building, no station staff, and no lifts.  A bit of a problem given that it was built in 2005, a time when people are generally aware that there are some who find stairs difficult.  The result is a pair of massive ramps on either side, longer than the ones at Pontefract Tanshelf, which rise ever so slowly to the overbridge, then drop down again even slower on the other side. 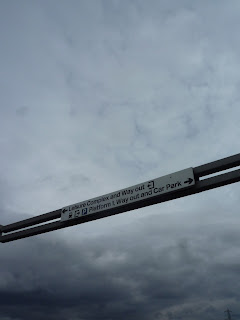 If you were at the bottom of the ramp when your train came in on the opposite platform you'd have no chance.  You'd just have to wait for the next one. 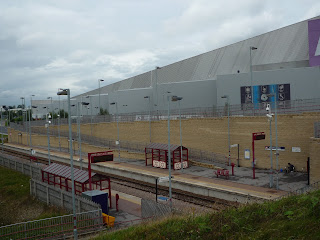 Castleford, my next stop, is a dead end.  For passengers, anyway.  All the passenger services call in at a single platform, then turn and go back the way they came.

I hate that.  I hate the idea of being on the exact same train I just came in on.  I decided that I would head into town and kill time until a train out again. 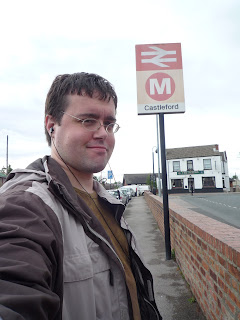 I was back on the platform within ten minutes. I try not to be too judgemental about new places.  I'll remind you I'm from Luton.  But by Christ, Castleford was a miserable, sad town.  I passed through a dark arcade onto a drab high street, where nasty blank buildings shared space with empty shells.  Kebab shops and chippies seemed to be the main retailers.  I carried on into town, where a Poundstretcher sat next to a Wilkinsons (still with the old orange logo), opposite a Cash Converter. 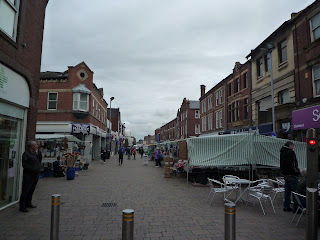 As I reached the pedestrianised part of town, two drunks fell out of a pub to my left.  They lurched into the street, grappling with one another, then pulled up sharply: there was a policeman across the way, talking to two old ladies.  They passed me, stinking of lager and ciggies, affecting sobriety.

Ahead of me, the shopping street seemed to be nothing but banks, charity shops and "to let" signs.  I didn't want to go down there.  I didn't want to be in Castleford any more.  I walked back through the arcade - where a homeless man was rubbing his feet - and back towards the station.  A girl in tight denim shorts walked past me; her iPod headphones stopped her from hearing three leering lads across the road demanding a blow job before they went down a side alley, laughing, rollicking. 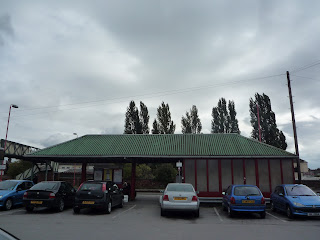 After all this, it would be nice to say something positive about Castleford station.  It does have a building, of sorts, even if the green and red colour scheme makes it look like a Chinese restaurant.  There aren't any staff but this large shelter does have a ticket machine and plenty of places to sit under cover, which is an improvement on many of the other stations I'd seen. 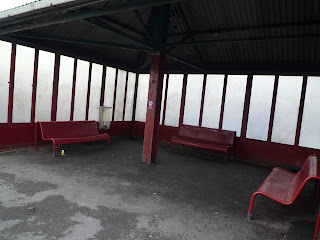 I passed the two old ladies chugging Rothmans furiously on the platform (seriously, does everyone in Yorkshire smoke?) and wandered down the end.  There's still a footbridge over the tracks.  Even though Castleford's a dead end for pedestrians, it's a through route for freight traffic, giving the Council hope that they might one day be able to provide more services here.  The second platform is therefore kept in a sort of fit state, on the off chance. 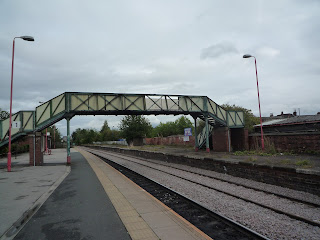 I heard a train coming and got ready to depart, glad to be leaving.  It actually turned out to be one of those freight trains, a pleasing little moment, so I raised my camera and took a pic of it. 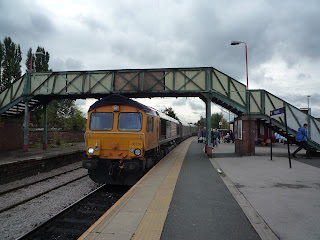 It transpired I wasn't the only person snapping a photo that day.  I became aware of a man close by, writing in a small notebook.  Yes, it was a proper trainspotter, a real one, who knew numbers and train types and all that sort of thing.  One whose knowledge completely overawed my own.  I was basically just waiting for him to find me out.  He sidled up to me.

"Do you have the twenties?"

"There's a couple of twenties going through at seven minutes to."

He shrugged, a sort of "your loss", as the Northern Rail train came in.  The driver greeted him with a friendly wave, and they had a brief little chat as he changed train ends; the man was obviously a fixture at Castleford. The female guard, meanwhile, ignored him; I like to imagine this is because women have more important things on their mind than railway trivia. 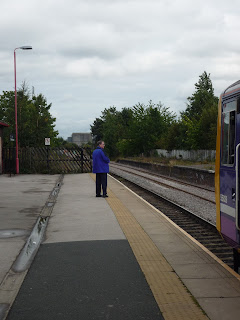 Normanton used to be a big station, with main line trains as well as local stoppers.  Beeching put paid to a lot of that, and what's left is a weird mish-mash of a station.  The island platform is ridiculously wide, and the train-facing parts are at odds with one another.  The spaces either side hint that there was once a lot more here than we now have. 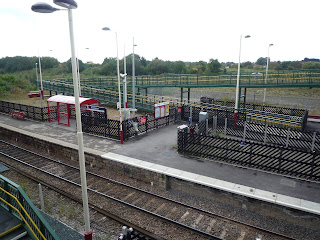 It feels a bit like a remnant of a station.  The remains of something once great.

I headed into Normanton hoping that my last town would be an improvement on the last.  I was in luck.  It was a good little town, nicely kept.  The railway's importance was underlined by the two pubs at the central crossing, the Station Hotel and the Midland Hotel, and a pedestrianised shopping street rose up the hill. 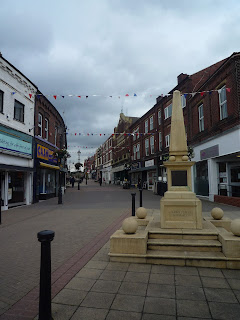 Still, it was a pretty little street, with plenty of variety in its shops - Hofmann's butchers (est 1896), hairdressers, a frozen food store.  The Black Widow Taekwondo Academy (no town should be without one).  I was particularly taken by the green tiled Womack Central Fisheries, the kind of chippy that steams up the windows on a cold evening while a chubby man ladles potatoes into a sizzling fryer. 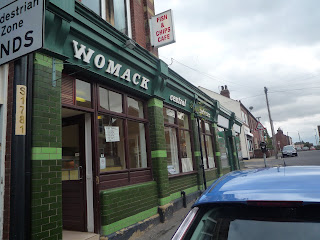 The schools had just kicked out, leaving spindly children loitering round the war memorial and the clock tower.  I decided to go somewhere they couldn't go - the pub.  I picked the Midland Hotel, becoming only the second customer inside.  As I sipped my pint, a man with thick black sideburns came in for a beer; his hair was so completely at odds with the rest of him, I decided he must be an Elvis impersonator, perhaps with the same agent as the Tragical Mystery Tour Beatles-tribute act on a poster in the window. 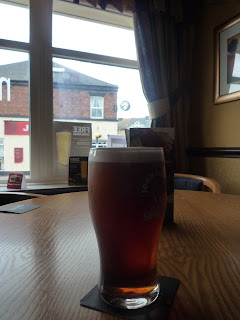 I liked Normanton.  It was a clean, pretty little town, still alive.  It didn't have the desperate feral nature of Castleford, or the empty drifting feeling of the retail park.  It was what life should be about. 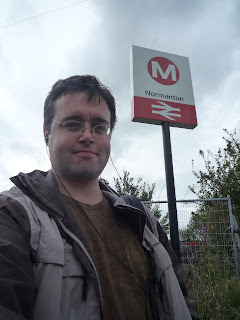 I can't believe you didn't stick around for the 20s.