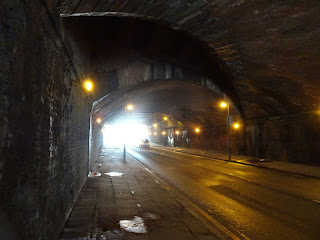 Undercroft.  It's such a wonderfully evocative, exciting word.  The space beneath the station; the netherworld beneath the tracks.  I'd negotiated my way down through Manchester Piccadilly.  Down from the overcrowded platforms 13 and 14 that aren't going to get any relief now because the government are incompetent self-centred arseholes; down the travelators behind two loud women who'd decided to spread their cases across the width of the belt and clog everyone else's progress; across the concourse, where a bearded Vic Reeves was wearing a denim jacket and looking ever so slightly lost; down two flights of escalators to the base of the station.  Beneath the platforms, amidst cast iron columns, a taxi rank and a bus exchange have been carved out, and of course the Metrolink stops here too.

Behind it though are passages, brick lined roads cutting under the tracks that are dark and cold.  August never penetrated here; it was always dank and chilled.  Time didn't either.  It could've been populated by bustle-clad whores and pickpockets and urchins begging for a farthing.  The undercroft.

Step outside of course, and suddenly it was 2017 again, and a little dull.  The railway arches had been filled with tiny businesses, a garage, a "live escape game", a bakery with a couple of benches where two Asian women with tote bags were buying still-warm loaves.  There was a car park, and then beyond, the back of the mail depot and an industrial estate. 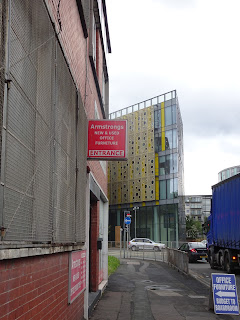 As I closed in on the ring road, I thought about how fragile regeneration is in the north, how patchy.  There were gleaming new buildings up ahead, but getting to them meant passing old, decrepit units, brick offices with their windows covered with mesh, open land with broken "for sale" signs.  In London, this would all have been colonised and rebuilt and renewed decades ago, maybe a couple of times over.  In Manchester and Liverpool and Leeds you step from old to new to shiny to shitty within the space of a street.  I waited at the pelican on the dual carriageway outside the blank face of a self-storage depot, then crossed to the foot of a hotel and an apartment building.  Gentrification was slow. 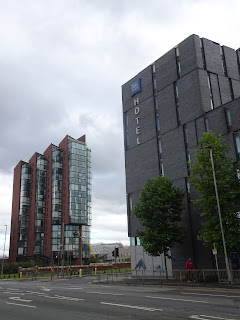 I was heading for New Islington tram stop, the first one out of the city centre on the Ashton line.  Although according to the Metrolink map, it's still in the centre, hiding inside the grey city zone.  To my mind, if you're beyond a ring road, you're outside the city.  No amount of fare jiggling can change that. 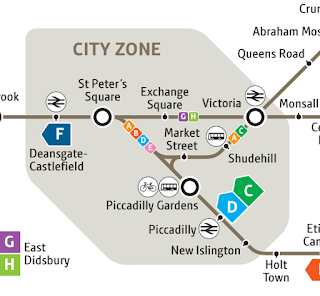 The reason New Islington is in the City Zone is that R-word again, regeneration.  The tram stop is part of the efforts to create a new desirable community, and the grey splodge is a powerful tool to convince estate agents and buyers that being north of the ring road doesn't really mean you're far from the city centre.  (It totally does).  You could absolutely walk to Selfridges from here, honest, but if you didn't here's a nice tram to save you the walk.

I followed the road alongside the tram tracks.  They bore under the streets to reach Piccadilly, and the tunnel mouth has been surrounded by a grassed area, not quite a park.  I'm sure if someone offered to build on it, the city council would snatch their hands off, but until then it was a bit of green where people could eat their sandwiches.  Up above me, attached to a lamp post, was a sign for construction traffic for "Manchester Metrolink Phase 3a" i.e. the very tram line I was about to use, the tram line that's been open for the best part of four years.  I don't know if Manchester's council is very lazy about signage in the city, figuring they'll get round to updating them eventually, or if they just don't care.  Or maybe they do it to annoy me. 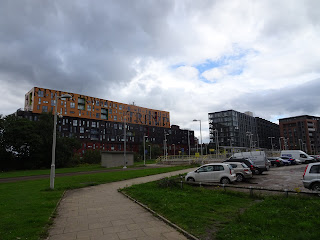 I'd just missed my tram to Holt Town, so instead I crossed the tracks and then the canal to head into New Islington itself.  The Chips Building, a Will Alsop creation using his trademark architectural style of "pile some stuff on top on each other then paint it a funny colour", is the flagship development here, and from a distance it looks great.  Up close it was less impressive.  The units on the ground floor, which were probably filled with sunny cafes in the renders, were mostly empty; a playgroup at the end, a beauty salon halfway along. 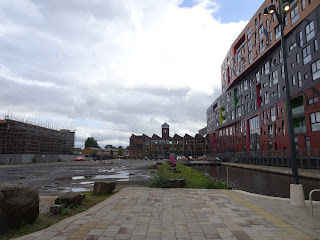 I crossed Old Mill Street, a boulevard, which is what they call a dual carriageway when there's arty lamp posts in the middle, and headed onto the towpath by the marina.  Pretty houseboats provided a welcome splash of colour in amongst the building sites and glass.  There was even a heron. 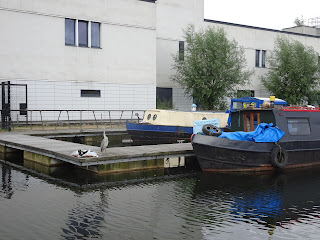 It's another space under threat; the council plans on evicting all the boats while they drain the canal basin to "fix some leaks".  The boat owners are claiming they weren't offered alternative berths, and instead are being sent off to cruise the waterways forever.  I couldn't help but wonder if all the new apartments being constructed had something to do with it.  Canal boats are charming and beautiful to look at; everyone loves them. 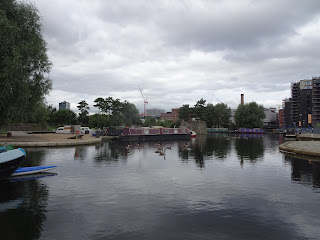 Trouble is, houseboats are also noisy and, well, human.  People live on them, have to top up the diesel engines with fuel, have to empty the sewage tank.  They've not got much room, so the roofs acquire TV aerials and bikes and boxes of stuff that the boatowners will get around to, someday.  They're a bit real, not just a postcard.  Reality is grimy and not so picturesque and drives down house prices.

Although as developments go, New Islington isn't that bad.  The council have been a bit more relaxed on planning rules for the district, and have encouraged experimentation in the designs.  The result is some interesting homes; a terrace with balconies and shiny black cladding, a row of homes with curled ornamentation and coloured patches.  It's livelier and different and the kind of thing that should be happening everywhere, not just in the expensive parts of town. 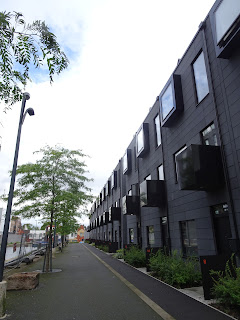 I circled round New Islington, passing a sign inviting me to a development called house™ - I wasn't sure if they'd trademarked the word "house" or the entire concept - and out the other side.  Into another world as it turned out.  I hadn't realised, but New Islington itself is a marketeer's project; this bit of town was called New Islington for a while, back in the nineteenth century, but it quickly fell out of use.  It was picked up again only when they started building apartment blocks, probably to hoodwink BBC types driven to MediaCity into believing this was a colony of North London.  The new part was being carved out of Ancoats, a district you probably have heard of. 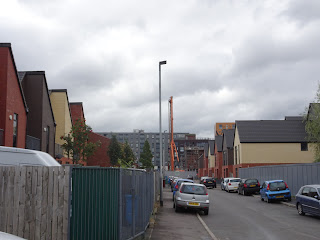 Ancoats is proper Manchester, a real inner city district; formerly industrial, formerly slums.  A street away from the modern homes of New Islington I found long strips of council houses.  Two cars were parallel parked on one corner, their drivers leaning out of the window to chat, a heavy fog of weed hanging over them.  A dog crapped on the grass verge, then wandered back into his house through the open front door, no sign of the owner.  Gardens had been paved over forming a length of grey concrete behind redbrick walls.  It was working class Manchester, and I wondered how long they had before they'd be pushed out as well. 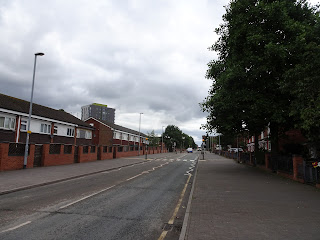 I was back on Old Mill Street, though it wasn't a boulevard up here, just a busy road into town.  I headed back to the tram stop for my first ride of the day. 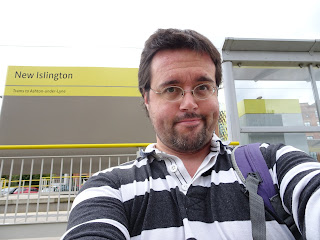 The tram was practically empty.  It had started at Altrincham, and only went a couple of stops outside the city centre to reverse at Etihad Campus.  My only fellow passengers were a Middle Eastern man, busy in his book, and a couple of loud drunks (it was barely half-ten in the morning).  They rolled off the tram alongside me at Holt Town, so I lingered a little to let them get away before I took my sign selfie. 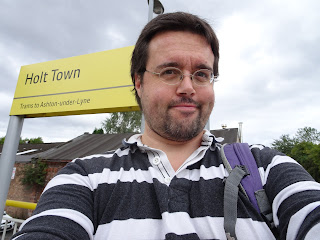 From the stop, I could see a vacant workshop, and, in the distance, a boarded up pub.  The drunks rolled up the hill, but I turned back, crossed the tracks, and wandered into a patch of open ground.  Nature had filled the space between the tram tracks and the river Medlock with trees and what you could generously call a meadow; rough grass interspersed with wildflowers. 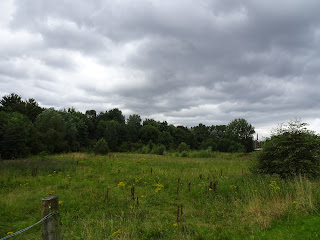 I was following the tracks on a wide tarmac path.  This was the pedestrian route from Sportcity into Manchester, and it had been built to accommodate huge jostling crowds.  On a quiet Thursday morning, I had it entirely to myself. 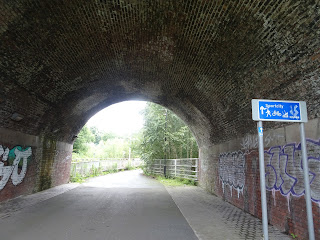 I passed under the Ardwick Branch Line, handily labelled on the underside of the viaduct, then the path rose upwards to Sportcity itself (I feel like that C in Sportcity should be capitalised, like MediaCity; that's a missed opportunity for the marketeers).  I emerged on the plaza that surrounds the Etihad Stadium, Manchester City's home ground. 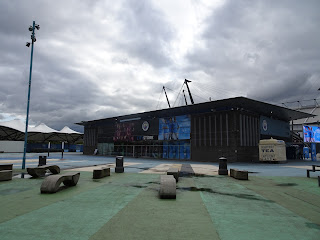 Football stadia are extremely exciting, lively places... for two or three times a week.  For ten months a year.  On a Thursday morning in August, not so much.  Giant expanses of concrete stretched off into the distance, ready to swallow up sixty thousand people on a Saturday afternoon, but right now it was echoey and blank.  The cafes and bars were shuttered up.  The Club Shop was open, and I only knew that because I got close and peered at it.  I didn't see anyone actually go in or anything. 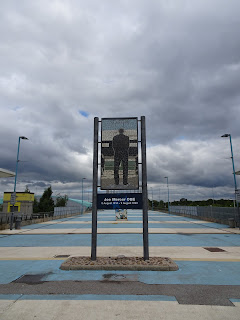 I had a bit of a stroll round, then doubled back to the tram stop.  There are a couple of entrance arches for the usual passengers - just a gap in the fence - but there's also a complex of ticket barriers for match days. 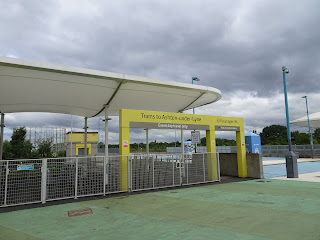 This is presumably more about crowd management than ticket checks. 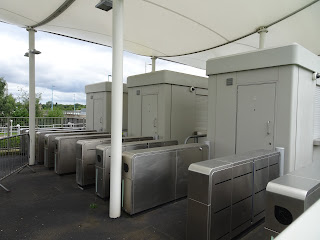 At track level, the platforms are staggered, either side of the footbridge, to spread out the passengers even more.  It's all very cleverly done, and completely redundant on a silent weekday.  I shared the platform with a tiny old lady. 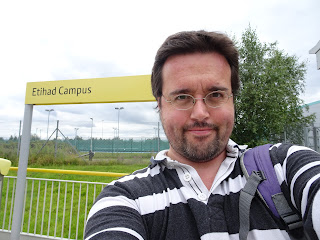 And I hate that name.  If a private organisation like a sports team wants to pimp out its stadium to the highest bidder, well, that's their decision.  Public transport is public transport though; it belongs to us (yes, I know Metrolink is technically a private company, but you know what a mean).  It shouldn't have a corporate identity muscling its way onto the map, not least because if the sponsorship deal changes, it'll be poor Metrolink who've got to come up with the money to change all the signs and the posters and the dot matrix signs on the trams.  I could just about accept Manchester City as an alternative name, but I'd much prefer something more geographically accurate - it was called Sportcity-Stadium in planning. 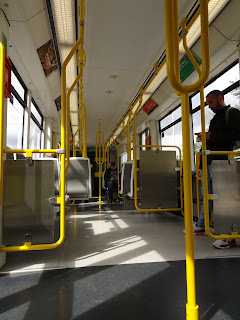 Oh dear, this really has been a whiny post, hasn't it?  Basically I'm deeply unhappy with everything new in Manchester.  I'm sorry.  I'll try to be a bit chirpier in the next one.
Posted by Scott Willison at 12:22

It wouldn't be your blog if you didn't write about things how you see them; how they affect you. Never apologise for do this. It's one of the things that makes your writing worth reading.
Keep going, Scott xD.