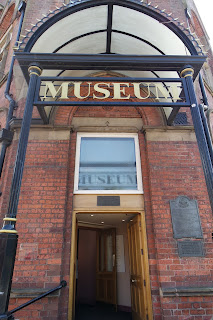 I hadn't planned on visiting Chesterfield Museum.  I didn't even know it was there.  I was just walking from the station to the town centre when I passed the redbrick museum-cum-theatre building.  I hovered vaguely outside, debating whether to go in or not, when I spotted this in the window: 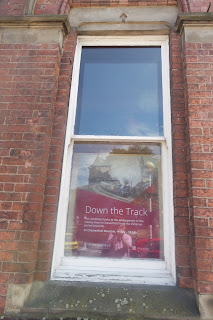 An exhibition on Chesterfield's railways?  That was me sold.  I nipped in, thinking it would at least be cool.

There was a tiny shop and information desk as I entered and I nodded and smiled at the ladies behind it.  One darted out from behind the counter.  "Welcome to Chesterfield Museum!  Is this your first visit?"

"Wonderful!  Have you been round the town centre yet?  Have you seen our famous spire?"  She pressed a booklet into my hand.  I explained that I'd just come from the station, so I hadn't even had a chance to see the town yet.

"Never mind," she replied, and started her talk.  For ten minutes, the little woman in the sleeveless top with Deirdre Barlow glasses captured me.  She was very keen, and very keen to share her keenness, and I was mortified.  If I'd known I'd get a one-woman lecture tour, I wouldn't have dared come in.

As it was, she explained all about the medieval builder's wheel that took up most of the entrance hall.  It looked like a giant hamster wheel, and operated in much the same way, with a person running around its interior so that it could winch building materials upwards to build the upper reaches of the church tower.  The windlass, as it's called, was then dismantled and hoisted further up.  Normally the windlass is left in the tower, trapped, but the installation of new bells in the 1940s gave them a chance to dismantle it and take it down to ground level.  She was very proud of the wheel, and I made all the appropriate noises, but, you know, it was a wheel.  It might have been eight hundred years old, but its age seemed to be the most exciting thing about it.

She finally let me wander round the museum.  I was the only attendee, and I felt like she was watching me, to make sure I got as much out of my visit as possible.  It was exactly as a provincial museum should be: a bit on the Romans, a bit on the granting of a market, a lot about local industries (Chesterfield was apparently a great centre for pill boxes and cotton wool).  There was a section on the local coal mining industry, and paintings of high days and dignitaries, and a fake shop window.

The museum lady had been very proud of the town's links to George Stephenson, which was naturally of interest to me; I wondered how the architect of the Liverpool & Manchester Railway came to be associated with the town.  It turned out he'd retired here.  I tried very hard not to say "is that it?" to the wall panel devoted to him. 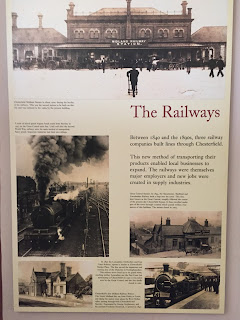 I found the railway exhibition in the back room of the museum, disturbing the young volunteer who was watching over the gallery.  He put down his book while I perused the half a dozen wall panels, prepared and written by local enthusiasts.  Chesterfield had once had three stations, but lack of patronage did for them; one of the lines was now a bypass, while one of the station buildings was buried under an office building.

As I stood in front of the panels, spending a respectable time in front of each in case someone was watching, the museum manager came dashing in with a stack of workbooks.  "We've got a party of Spanish schoolchildren coming in any minute.  How's your Spanish?" he asked the volunteer.

"That's French!" said the manager, exasperated.  I took advantage of the distraction to make my way to the gift shop, where hopefully my tour guide wouldn't see me and I could make a swift exit.  The Spanish exchange students were already out there; long limbed, tanned, looking mildly amused at this tiny little place.  The manager came barreling out and bowed to the party.  "Buenas tardes!" he said, and the kids smiled and repeated it back to him.

He straightened up, smiled, then bellowed, "WELCOME. TO. ENGLAND!"

I made a swift exit before I cringed myself into a corner. 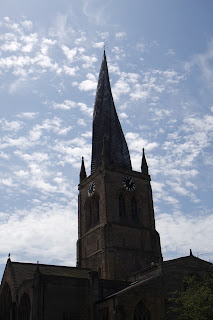 Over the road was Chesterfield's biggest claim to fame, the crooked spire of St Mary and All Saints Church.  I'd seen it from the train, a twisted child's toy poking at the sky.  The museum lady had explained to me that the twist was due to them replacing the roof tiles with lead in the Middle Ages; the sun heated the lead unequally, causing one side to expand more than other, and then contract, gently bending the tower out of shape.  Personally I prefer the local story about it, which is that a virgin got married in the church and the spire was so shocked it turned round to have a look.  The spire will straighten when another virgin marries in the church, something which apparently hasn't happened for five hundred years. 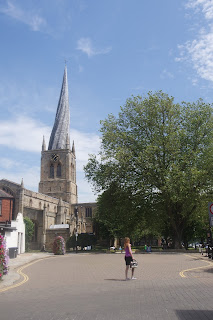 The spire showed up on shop fronts, on the logos of businesses, even on bins with Spire Pride written underneath.  Wouldn't "InSpire Pride" be a better pun?  Ah well. 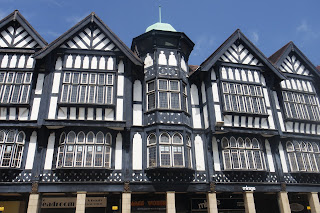 Medieval streets with names like Knifesmithgate and Saltergate spiralled out from the church, running through to the impressive market square.  Rows of permanent stalls gave you every opportunity to buy One Direction floor rugs and ex-catalogue shoes. 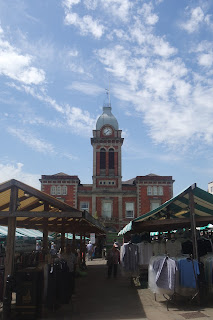 I had a fair amount of time to kill.  My original plan had been to walk out to Dronfield, my last station of the day, but the light-headedness at Langley Mill had put me off the idea.  I didn't fancy keeling over into someone's front garden somewhere off the B6050.  Instead, I decided to experience the joys of Chesterfield and then get a train to Dronfield. 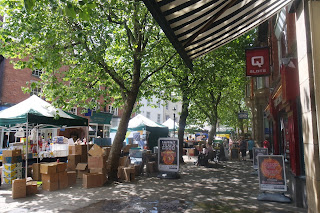 I'd sort of run out of joys now, though.  I decided to have a wander out to Holy Trinity Church, George Stephenson's place of burial.  A little homage to the man who brought us the railways.  There was apparently a simple tomb there, and a window dedicated to him, paid for by Robert Stephenson. 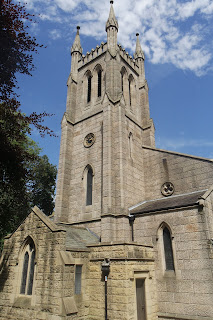 Unfortunately the church was locked up tight.  The only sign of life was a drunk in the graveyard.  I wandered all the way round, hoping I could perhaps see the windows for myself, but even those were obscured by security grilles.  I ended up leaving, frustrated, and wandering back into town, past a theatre school whose patron was Bernie Clifton.  I imagined him giving classes in falling over while wearing false legs. 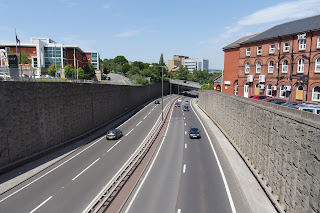 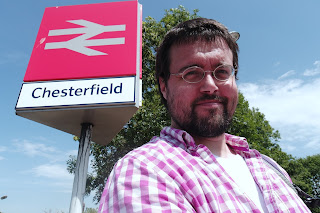 They could probably do with washing the bird poo off, though.

Chesterfield station got a new building around the turn of the millennium, and it still gleams with civic pride.  From the outside, it's nothing special, a little bit engineering firm regional HQ, but they'd splashed out on a statue of George Stephenson outside. 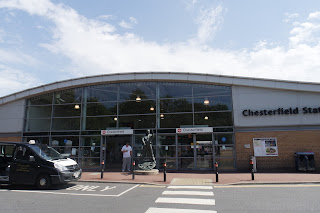 No, he's not giving you the finger; that's a tiny model of the Rocket resting on the palm of his hand. 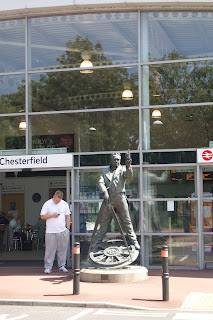 Inside the station building is far more successful; bright and airy, with plenty of places to sit and not too much corporate intrusion. 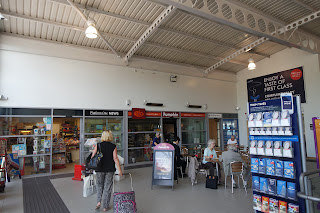 The platforms, meanwhile, were relics of the original station, so they featured wooden canopies and fancy ironwork.  Unsurprisingly, that was a far nicer place to sit. 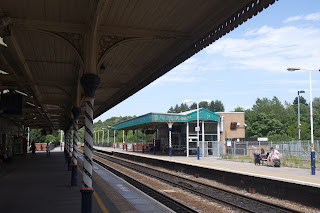 Chesterfield also featured an amenity I have never seen before: a milk vending machine. 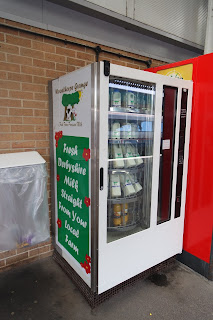 Is there really that much of a demand for milk in Chesterfield?  Are there hundreds of people passing through and slapping their forehead in frustration because they won't be able to get to a shop for their evening cuppa?  What's the shelf life of milk - a week?  It's not like a Twix or a bottle of Coke, that can sit in the machine for months without any hassle at all.  No-one wants to put their money in the machine and get a bottle of yoghurt instead of semi-skimmed. 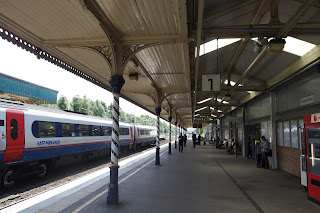 Befuddled, I boarded my Northern Rail train for the trip to Dronfield.

There should have been a fifth station on this stretch of line for me to visit.  Back in 2013 the Government approved plans for a new station at Ilkeston, between Langley Mill and Nottingham.  When they started clearing the site for construction, however, they realised that they'd need better flood defences than the ones they'd planned.  On top of that, they found colonies of great crested newts, a protected species, so the whole project was put back even further.  Now a station that had been planned to open in 2014 won't be there until 2016 at best.

Interestingly, the station seems to have been added to the timetables of the local trains, because my train times app showed this: 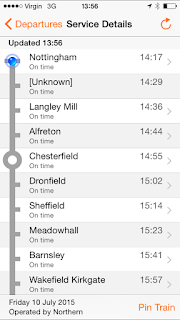 So all I had to do now was kill an hour in Dronfield.  (I haven't collected Nottingham yet either, but it has a TRAM, and so it deserves far more attention than a quick run around at the end of the day). 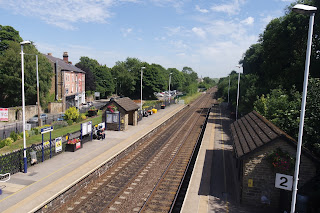 Fortunately Dronfield was a very nice little village.  Squeezed in between high ridges, the main street curved round past flower shops and a post office, plus, a little more surprisingly, a tattoo parlour.  There used to be a time when tattoo parlours were only found on the grimiest back streets of our cities; now that getting inked is as commonplace as getting a new hairdo they've sprung up all over the place. 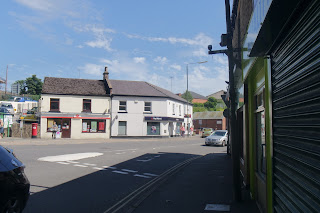 I followed the road round, yellow stoned cottages huddling for space over the road. 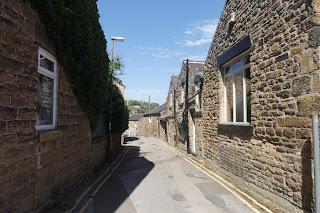 I quickly realised that I'd more or less seen all the village had to offer, so I found somewhere to settle. 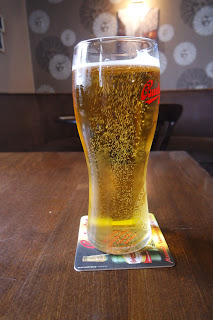 When I'd gone into the pub, the flat screen tv on the wall was tuned to a Friends repeat on Comedy Central, so I picked a table for a bit of light comedy.  Yes, I've seen them all a million times, but it was "The One With The Yeti" which (a) is a good one and (b) has that boy from Adventures in Babysitting in it.  Unfortunately, the barmaid must have sized me up as a big pop music fan, and she changed the channel to VH-1.  It was in the middle of 90s summer hits, and to be honest, I had enough of Peter Andre's "Mysterious Girl" and "Tease Me" by Chaka Demus and Pliers the first time round.  I drank up and headed back to the station. 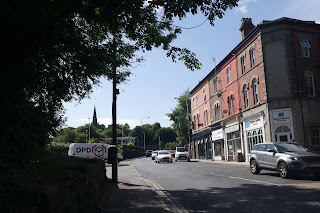 Dronfield station has an active user group.  They'd provided hanging baskets and benches, plus a pretty pit tub on rails outside to commemorate the village's mining heritage. 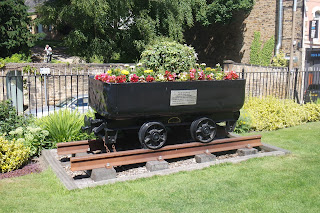 You know what they didn't have?  A proper station sign.  Not one.  I ended up squatting on the platform like an idiot. 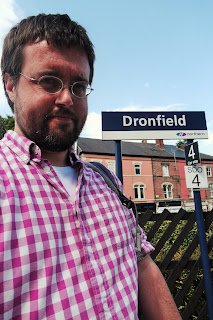