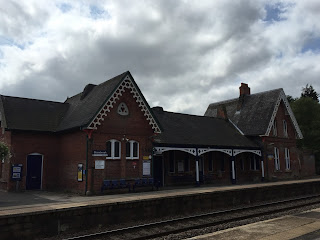 Another station, another Cheshire Lines design straight out of their big box of generic plans.  It's actually an idea that the railways have returned to in recent years; Network Rail now have a bunch of pieces that mean they can simply assemble a new station in kit form, as at Buckshaw Parkway for example.  It's a good way to save design costs and speed up the construction process, but goodness it's dull.  I'd like the stations to look different from one another, so I feel like I've actually traveled somewhere. 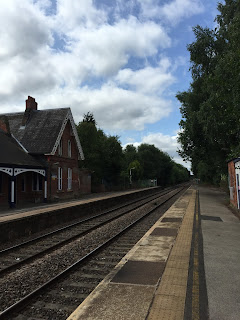 Another way of saving money is to not put up a decent station sign.  Glazebrook's got a distinctly rubbish looking way of marking its territory. 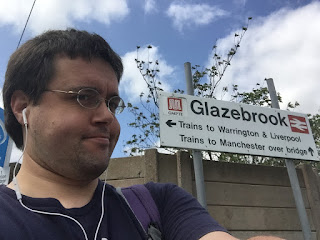 From there it was a brief walk until I reached the local village.  It's the fringes of Manchester, so while it had a village green and a parish council, it wouldn't be suitable for a Miss Marple location shoot.  It was a bit grimy and base. 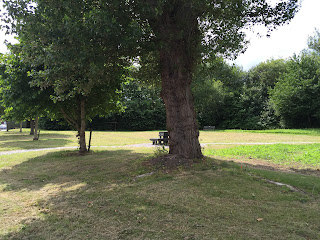 The community notice board was absolutely full of anti-HS2 posters; the connection to the "traditional" lines for trains to Scotland will branch off and pass by Warrington on its way to Wigan.  I sighed.  I know I wouldn't want a giant piece of railway infrastructure built through my back yard, but that's progress I'm afraid.  The needs of the many outweigh the needs of the few.  After a certain point you just have to accept that these things are going to happen and invest in triple glazing for your windows. 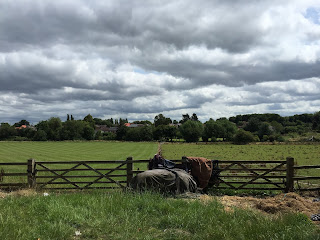 Incidentally, I apologise that my photography is not up to my usual high standards (LOL).  Somewhere between Birchwood and Padgate my camera stopped responding; it refused to recognise that the lens was open.  I was left with the camera on my phone, which is how this blog started before I got ideas above my station so it was pleasingly retro, if a bit inconvenient.  It added a frisson of tension too: would I get to Irlam station before the iPhone's finicky battery decided all this "use" was just too inconvenient and gave up? 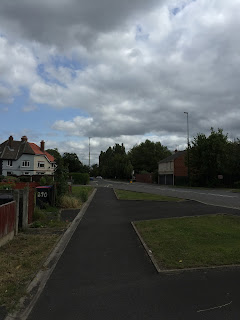 A turn off the bypass and I was walking through Irlam.  The lamp posts were still wrapped in Christmas tinsel, which is an admirable way of saving time and money for next year but isn't it bad luck?  (Though I once left our Christmas tree up until spring because I couldn't be bothered and I didn't end up with a horrible run of misfortune.  Well, no greater than usual anyway).  There were a couple of factories, and then I was approaching rows of small shops and pubs that had been converted into office blocks. 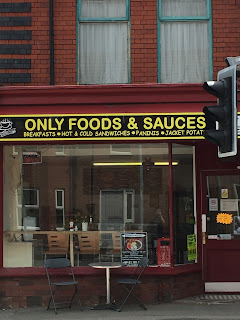 Irlam's retail offerings seemed to be, let's say, "quirky".  In addition to the above pun-based cafe, there was one called "Bready 2 Go", a woodwind instrument shop, and a letting company with an inappropriately glamorous looking sign called "Property Showcase".  There was also a shop that didn't have a sign board, but which I can only assume was set up to supply all your anti-social behaviour needs.  Its neon window signs advertised sale prices on air pistols and ammo, BB guns, darts, bikes and scooters.  It was a one-stop shop for the local drug pushers. 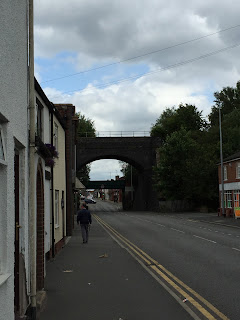 The first railway viaduct carries a goods line, so I passed under it and down the hill to the second route.  Irlam station was tucked somewhere behind a new business park, so I followed the inadequate signs to the subway. 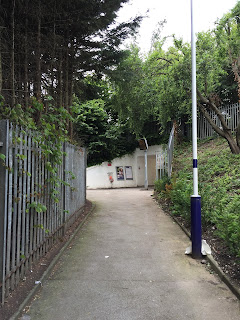 For decades, Irlam station was empty.  The building had been abandoned, with no ticket facilities, and vandalism and arson took their toll.  Its boarded up face groaned at passengers as they passed.

Finally, last year, the local council, heritage groups and private investors got together and spent some money on the station building.  And it's a triumph. 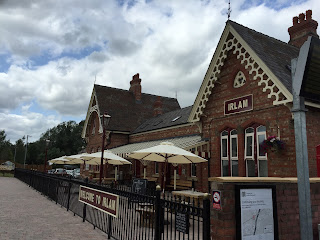 It's been carefully, lovingly restored, with all the features repainted and repointed.  Even the water fountain has been scrubbed clean.  I did a circuit and then went inside. 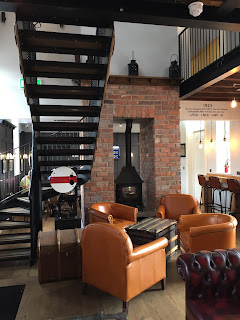 Irlam station is now home to 1923, a cafe/bar, and it's been charmingly done.  Yes, it's full of railway memorabilia, as is legally required, but it's also fixed with contemporary furnishings and lighting.  I ordered a couple of pastries and a pint of beer and went looking for a seat.  The place was incredibly popular, particularly with nice ladies of a certain age, but I found perhaps the best seat in the house. 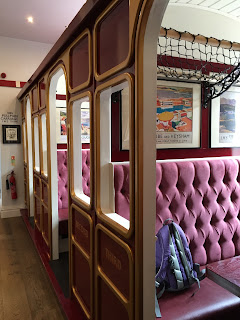 The booths have been done out as railway compartments, with plush seating and luggage racks.  I slid in place opposite period-appropriate repro posters. 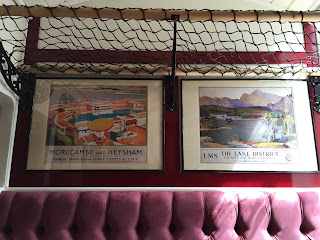 It was utterly delightful.  I chomped on my pork pie and sausage roll with a grin on my face.  I should have ordered something a bit classier, a bit more Orient Express, but I didn't have the time.  Instead I just filled my face with pastry and washed it down with beer and smirked. 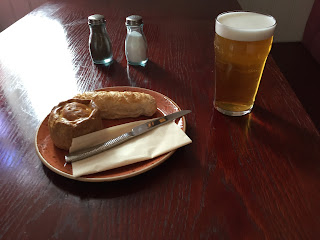 Even the toilets are period appropriate, though surely this sign can't be real..? 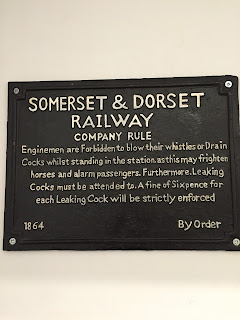 Making sure I wouldn't be liable for a sixpence fine I made my way across to the Liverpool platform for my train home.  It was inevitably a disappointment after the riches on the Manchester side. 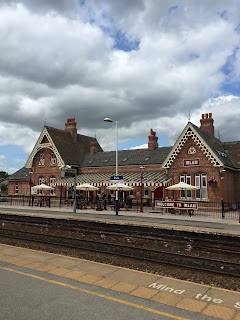 There was an intriguing sign, however.  On both sides of the station, towards the end of the platform, the Irlam sign was replaced by a curious set of hieroglyphs.  It looks like something from the far east, but I couldn't work out what it was for.  Is there a large Chinese community in Irlam?  I hadn't seen one.  It just seemed odd. 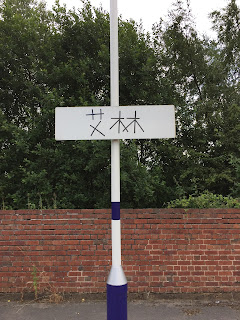 It's the best sign at the station though, because God knows the main one is dull as heck.  Still, when you have a station cafe as gorgeous as 1923, who needs a decent totem? 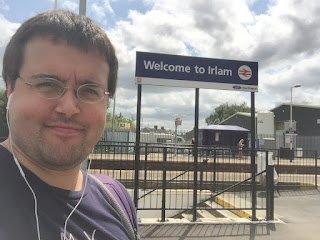 Strange fact, I spent many years dreaming of visiting Irlam. In my Dad's 1973 road atlas of Great Britain, Irlam was on the south-western extremity of the 'Manchester' double-page spread. To a midlands-based 8 year old boy it seemed impossibly exciting.

Finally I got to visit Irlam by train last year. Let's just say I've been to nicer places.

I don't know if you will see this, but the scribbled sign says 艾林, which if read in Cantonese sounds like "eye-larm", which is as close as you're going to get.

Thank you JQ! I guessed that it may have been Cantonese but I wasn't aware that there was a big Chinese community in Irlam, unlike Levenshulme, say, which also had signs in the languages of the local rail users. I always love seeing this kind of thing on the network!

It seems that you are quite expert at blogging. I literally loved your blog. The best double glazing has the guaranteed features with the optimum product quality.