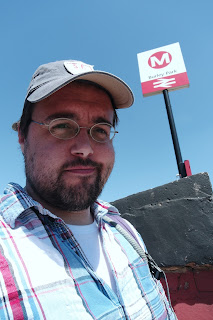 With a Sainsburys' New Yorker sandwich inside me (Pastrami and gherkins; luckily I wasn't on the pull) I disembarked the train at Burley Park.  I'd done four stations that morning; this afternoon I hoped to polish off another three. 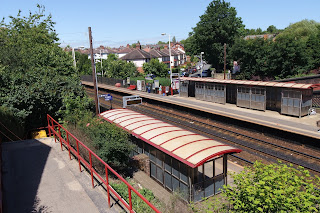 The passengers at Burley Park were very different to those I'd encountered in Cross Gates and Garforth.  Now they were a mix of Asian families and students, the latter slouching their way down the road with backpacks dangling heavily around their waist.  I turned a corner and found a fabric shop with its window display filled with brightly coloured saris. 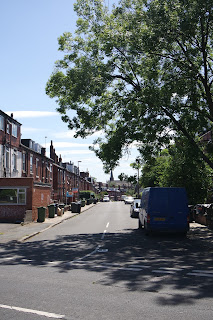 I accept that working for the council can be a bit dull.  Been there, done that.  But I feel the planning department at Leeds City Council may have taken their eyes off the ball when it came to laying out the area round Burley Park station.  I was walking along Beechwood Crescent, past a series of smaller streets that ran up to the railway line, and the road signs were a parade of "will this do?".  Beechwood Grove.  Beechwood Street.  Beechwood Row.  Beechwood Terrace.  Beechwood Mount.  Things briefly got interesting when Graham View appeared, until that was followed by Graham Terrace, Graham Street and Graham Grove.  I guessed that this district was laid out by a town planner just before the Christmas lunch - a town planner who was probably called Graham Beechwood - and he'd already had a couple of sherries before eleven.  "Fourteen streets named in two minutes - sorted.  Now where's that turkey!" 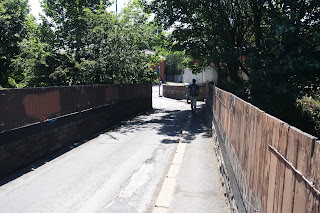 A cut across the railway via a narrow bridge, then I found myself at the foot of Headingley stadium.  One of the Headingley stadiums, anyway.  Much like Old Trafford is for Manchester, Headingley is for Leeds: a concentrated hit of sporting action, with two grounds right next to one another. 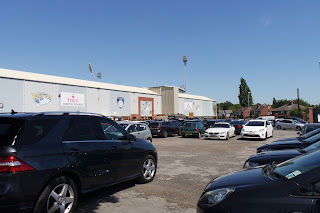 Headingley is home to both Leeds' Rugby League team, the Rhinos, and its Union team, the Yorkshire Carnegies.  I have no idea what the difference is between Rugby League and Rugby Union.  The second one is more popular with public schoolboys down south, I know that; League is more popular with gruff Northern types, so I suppose it involves more fighting.  I did do rugby at school, for one year, and mostly what I remember is it was really cold and you weren't allowed to throw the ball forward, only backwards.  Is that League or Union?

Oh, let's be honest, I don't care.  My interest in rugby begins and ends with Ben Cohen, Scott Quinnell and the chaps at the Dieux du Stade.  If they want to play with oddly shaped balls as well, fine, whatever keeps them happy; just make sure you keep releasing homoerotic calendars featuring all the players in tiny pants (or less). 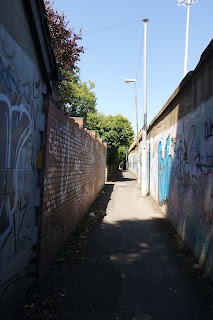 A grim alleyway ran behind the stadia, and I used it to cut through to the cricket ground.  Now cricket I have even less time for than rugby.  Cricket is one of the most boring, and at the same time, most ridiculously complicated ways to spend a week (a week!  A match takes a week!).  I have absolutely no idea how cricket works.  You have to throw the ball to knock the stumps off; that bit I get, but the scoring system is incomprehensible to me.  The BF has used this against me on numerous occasions; he'll be watching some interminable cricketing farrago, and I'll say "is there much more of this left?"

"Just four overs," he'll reply, which doesn't sound like much, but it turns out an over is roughly equivalent to eight months, and I never get a look in on the telly. 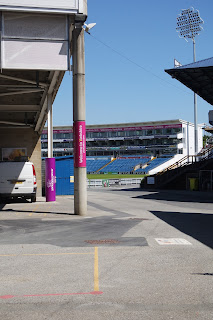 I may have got the cricketing terms wrong there, but the important fact to remember is, I don't care.  I understand the appeal of many sports on an intellectual level, even if I don't particularly like them myself: they're exciting, they're full of drama, they keep you fit.  Cricket does none of these and yet people still pay good money to watch it.  It baffles me.  They don't even produce any decent looking sporting hunks, with the possible exception of Freddie Flintoff, and even he's a bit of a cock. 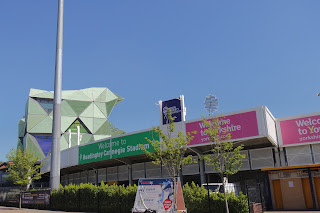 About the only thing cricket has going for it is their remarkably experimental attitude to architecture.  Lords has its amazing lozenge shaped media centre, while the Oval has the elegant curve of the OCS stand.  Headingley has the funky green and white Carnegie Pavillion, which also includes teaching facilities for the sports faculty of Leeds Metropolitan University.  It also has these floodlights, which I thought were just designed to be interesting until I looked at the photos and realised they were the White Rose of Yorkshire. 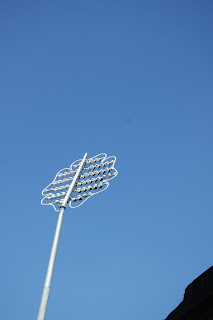 Cricket attracts a very different class of neighbour to, say, football.  While the streets around Anfield and Goodison are narrow terraces for the working man, Headingley was set amongst large detached homes surrounded by trees.  I walked along a busy but pleasant road beneath oaks and sycamores, shielded from the sun by their tall branches. 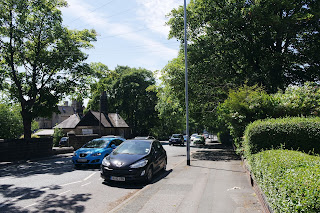 It was only once I crossed the railway line again that the trees disappeared.  There were tower blocks now, and a greasy spoon called Sunny Side Up, and an old woman enjoying the sun in her front yard wearing fewer clothes than you'd expect from a lady of her age. 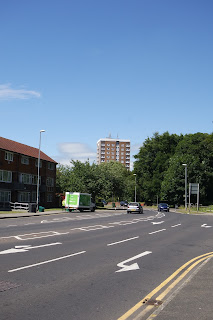 The station here is called Headingley, though it's probably further away from the stadiums than Burley Park; I expect the locals know which station to alight at. 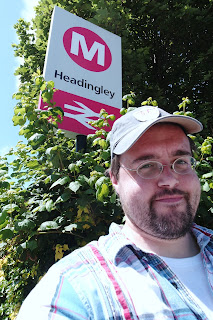 As you'd expect from a station that was so important to the leisure of the Victorian gentleman, it has an impressive station building.  As you'd also expect from a Northern station in the 21st century, the building is no longer used for railway business, and instead has been taken over by Sensory Leeds, a charity for disabled people.  It's great that the building is still in use, and for such a fine purpose too, but I'd quite like there to have been just a tiny ticket office somewhere in there. 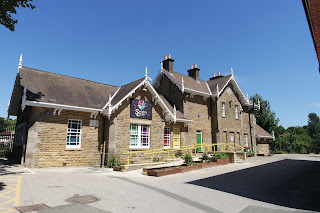 There was a footpath running under the tracks, and to cross it, there was a pedestrian bridge.  Signs warned me that it was "weak", making me anxious as I stomped across the wooden boards.  Do they really force all those cricket fans to pass over this?  Isn't that incredibly dangerous? 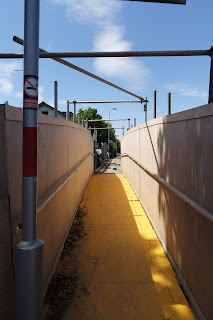 Headingley station was disappointingly ordinary.  I thought it might have a bit of a sporting theme going on, like the wonderful Oval station on the Underground; perhaps cricket tableau on one platform, and rugby themed ones on the other. 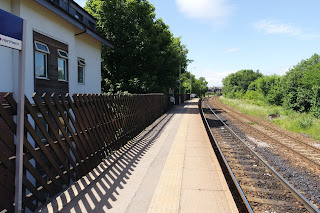 Nothing.  Not a mural, not a painting, not even a bog-standard ALF.  There was a tiny poster marked How to get to the Headingley Carnegie Stadium but that was just a map.  Could they not get the Yorkshire Cricket Club to adopt the station?  Make it into a bit more of a destination, a bit of an attraction in its own right? 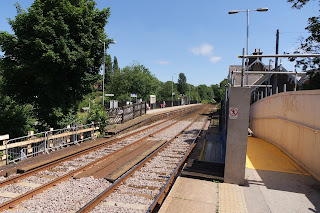 My final station of the day was Horsforth, the last station in West Yorkshire on the Leeds-York line.  I'd already done the rest of the stations on this route so this was something of a momentous occasion for me. 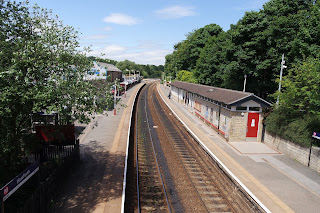 Luckily, Horsforth was lovely.  It was busy and well-used; it had plenty of facilities - including an actual ticket office with an actual person in it - and to leave the northbound train you had to cross a footbridge over the Old Mill Beck. 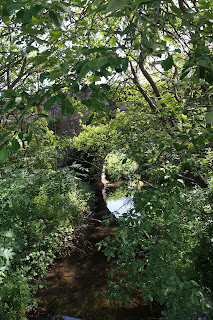 Leeds Trinity University is based in Horsforth, a former Catholic teacher training college which only gained degree awarding powers in 2012.  They still seems to be vaguely excited about being a university town, with plenty of signposts to guide you to the facilities and a church carrying a banner saying "We welcome students" (don't we all dear).  The novelty will soon wear off, and next thing you know the local paper will be full of complaints about youths vomiting in people's front yards and making too much noise when the pubs close. 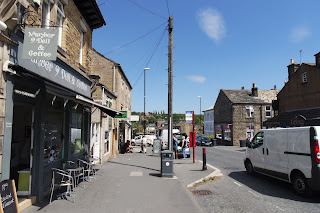 The High Street was lined with cafes and delis, their outdoor tables well patronised on this sunny day, and terminated at a large roundabout.  Crowning it was The Old Ball, a pub-slash-pizza kitchen.  I immediately regretted that naff sandwich (I am a whore for pizza of any kind).  I was going to venture in for a pint, but the tables outside were covered with laughing, happy young people and slightly overdressed women who'd clearly arrived here in open topped cars.  They all looked so charming and nice and popular that I immediately felt inadequate.  I turned away, and headed for the much smaller Fox and Hounds. 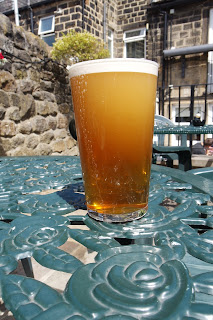 The barman at the Fox and Hounds was about eight hundred years old; when I went into the beer garden - more of a terrace at the back - there were only two other tables occupied, and both of those emptied before I was even halfway through my pint.

I leaned into the plastic chair - it creaked ominously - and thought, yep, this is more my style of pub.  Not the sexy one with the gourmet meals and the effervescent clientele.  The empty one that everyone ignores that's past its best.

I may have self-esteem issues. 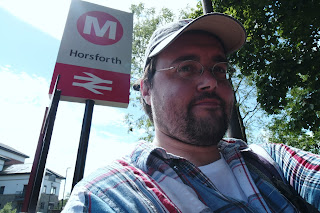 It looks like the whole of Headlingley suffers from the unimaginative planner problem with lots of streets having a run of a common name.

I can't stop laughing at the Graham Beechwood paragraph. I think your theory is spot on! Or at the very least hilarious.

By the way, I found your site when searching for an answer to some question a while back. As someone who just moved to the Wirral from Australia, I appreciate your site not only for how much of the north it covers, but for the witty commentary.

(Hope you brought a coat).