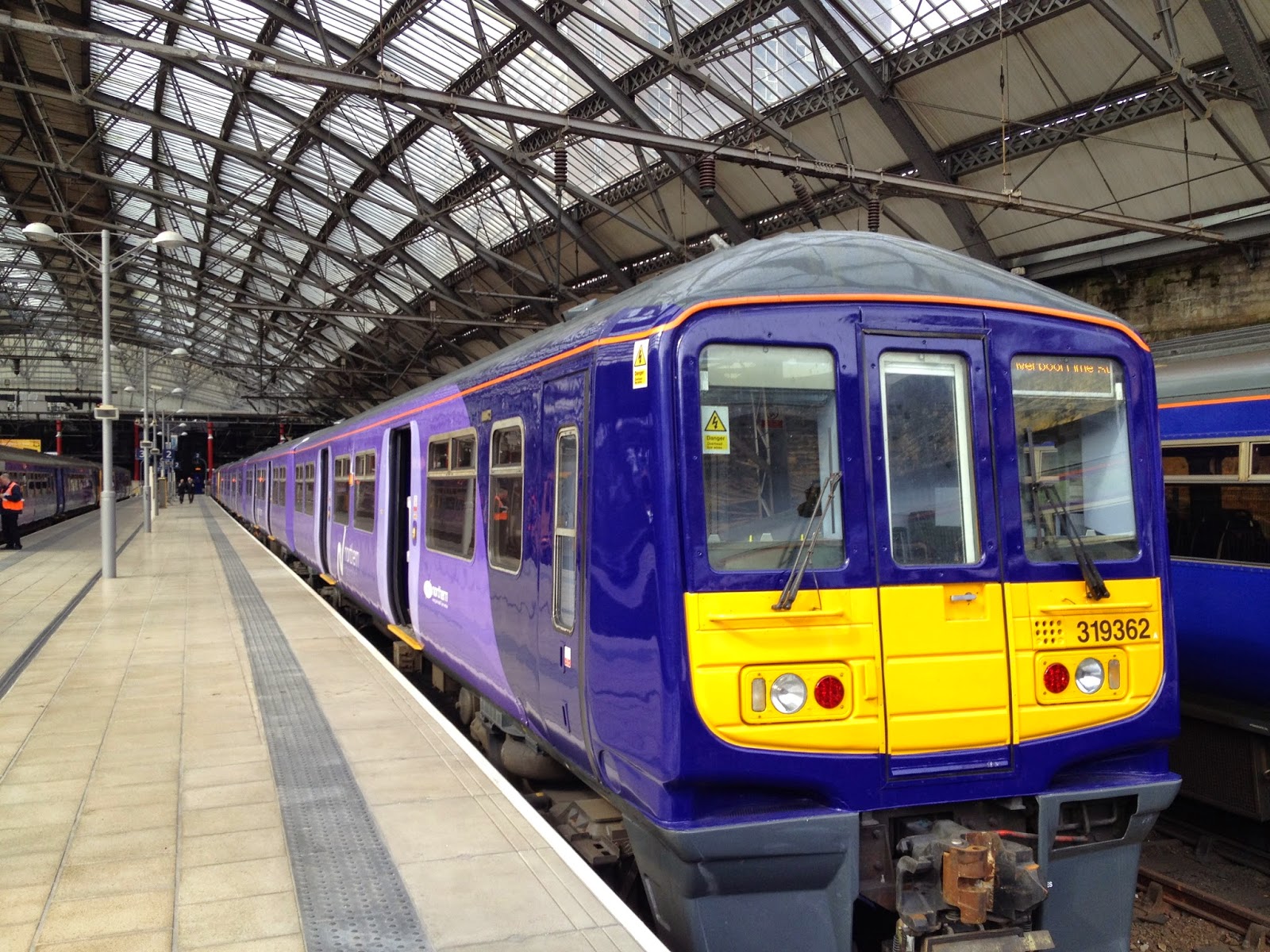 This is a blog about railway stations.  I feel the need to put this up front in big black letters because I'm about to delve into the world of actual trains, and people do get very steamed up about it.  I can pretty much blag my way through a post about stations because I know a bit about architecture and I know a bit about history and I know a bit about geography.  Trains though?  You have to be absolutely right or a thousand people will descend on you and tear you to shreds, like a school of piranhas on Helga Brandt.  So please forgive any factual errors that may follow, and take heart in the knowledge that I don't really care. 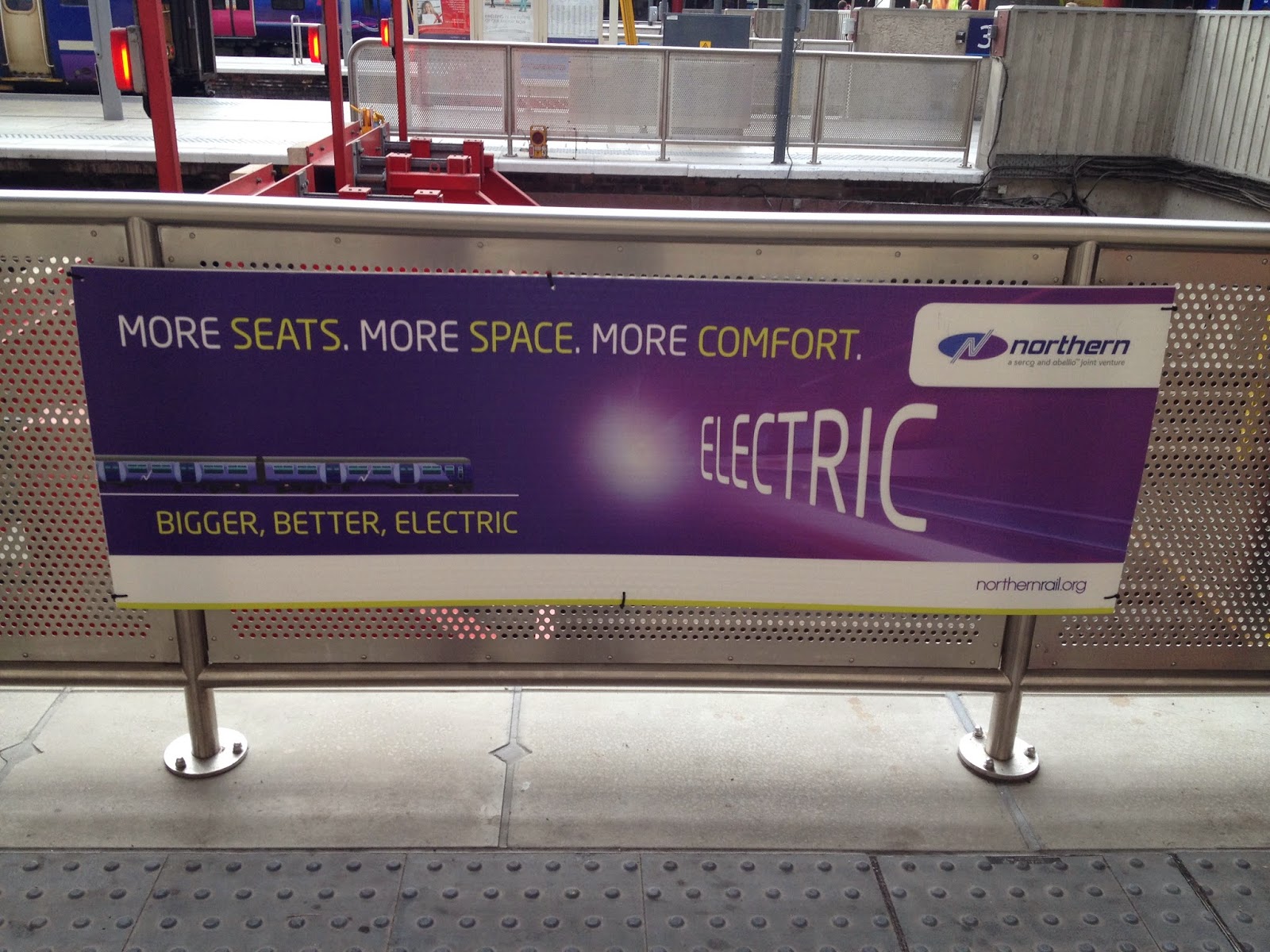 I was at Liverpool Lime Street with Robert so we could ride an electric train.  The line between Manchester and Liverpool has finally been electrified, and as a result, Northern have started rolling out new trains in a new shade of purple.  They've been going for a few weeks now but this was the first chance Robert or I had to actually experience the joys of electric traction via Newton-le-Willows. 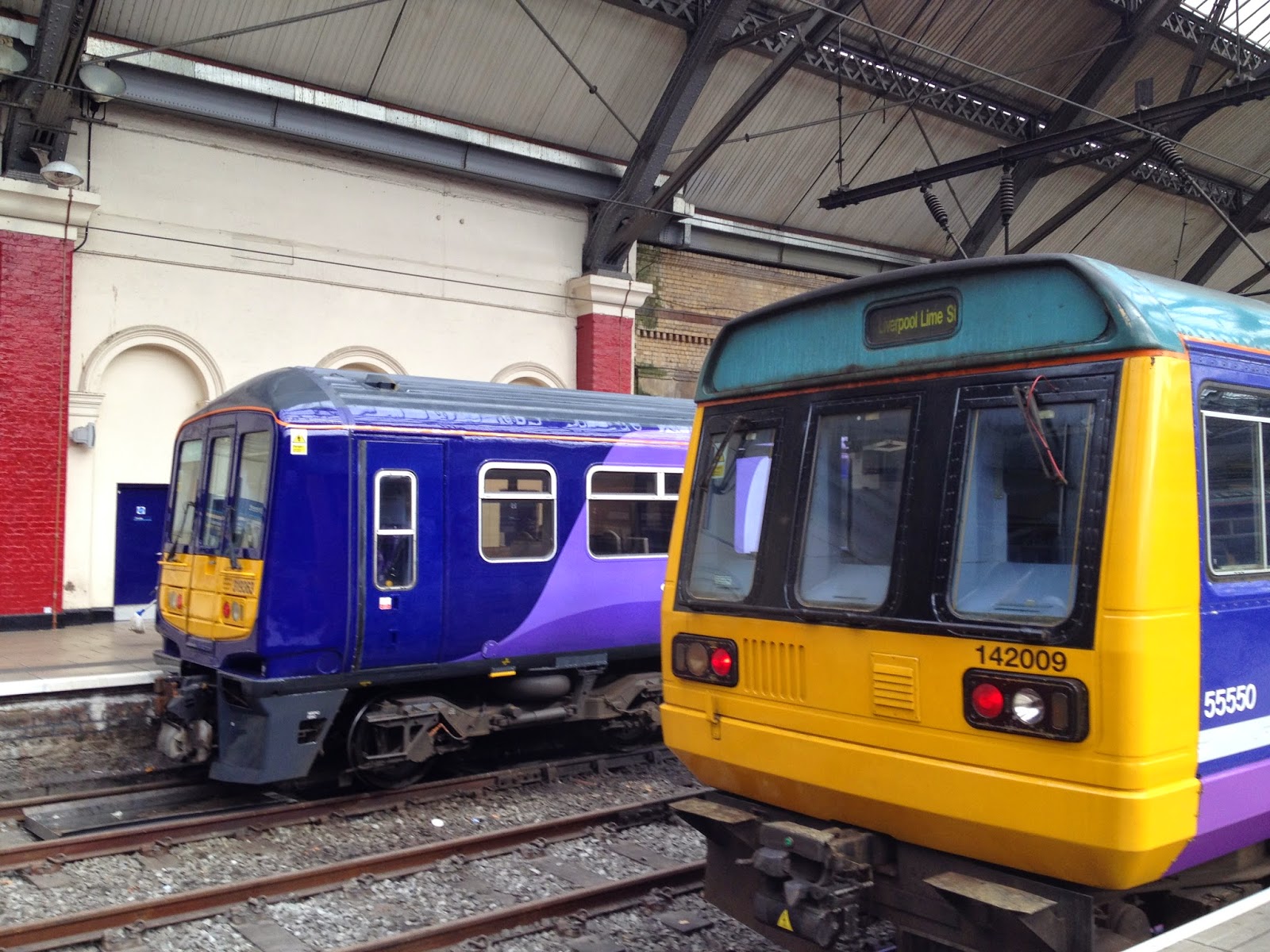 Of course, they're not actually new trains.  They're London's cast offs.  While the capital is getting a new fleet, these trains have been sent up north.  For twenty years they plied the Thameslink route i.e. the line from my home town of Luton to London.

It meant that while Robert was positively giddy at seeing these trains in the flesh, I was a bit underwhelmed.  I remembered these when they were actually, properly new.  I used to ride them all the time.  Obviously they weren't purple then, but they were still the same trains. 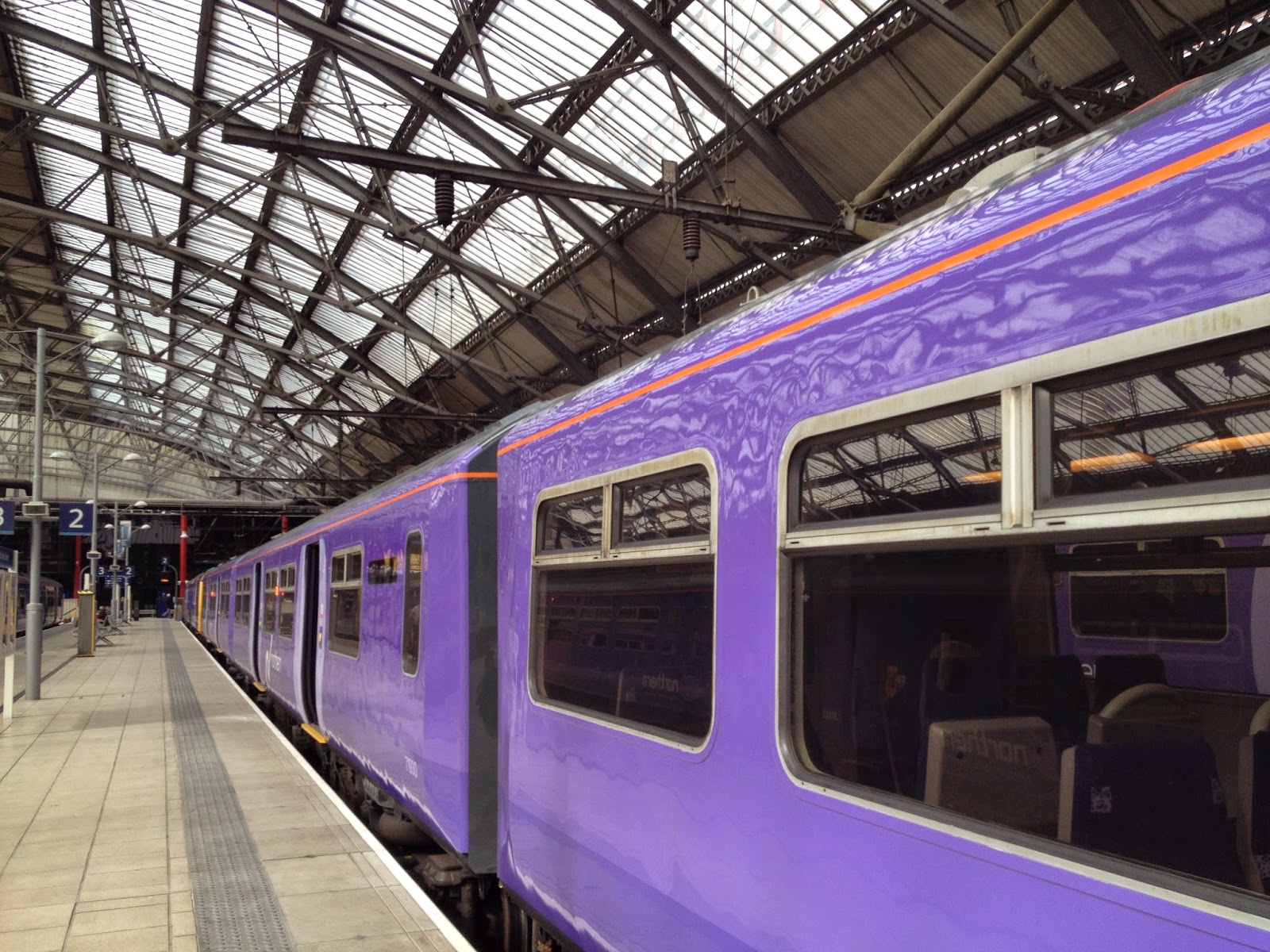 I think my lack of enthusiasm may have infuriated Robert.  He's a proper railfan.  Throughout our conversation he referred to the trains as "319s", and he was able to identify the train we were about to ride on as the one called "Northern Powerhouse" just by the number on the front (319362).  I admire that level of knowledge, but I can't equal it.  I'm only able to remember that these trains are Class 319 because I can hear Victoria Wood and Julie Walters repeatedly saying "319" in that sketch where Duncan Preston is a disgruntled hotel guest ("319 was down for a continental breakfast, a tart and a Daily Telegraph."  "Well, I can assure you I didn't have a woman in my room all night."  "Did you get your Daily Telegraph?").  If all the other classes of trains could somehow tie into skits by much loved comedy performers I'd be a lot better at remembering them. Robert going for a position as the new hostess on Wheel of Fortune, there.

We got on board, and I was disappointed to see that Thameslink's silhouettes of the London skyline had been replaced by a blank wall.  Could they not spring for a Liver Building or a Beetham Tower?  Something a bit Northern and special.  Still, the moquette on the seats was pleasant - purple, obviously - and there were scrolling LED screens to tell us our next station.  Or, more specifically, our next "station stop", which is a horrific abuse of the language and a frustrating tautology. 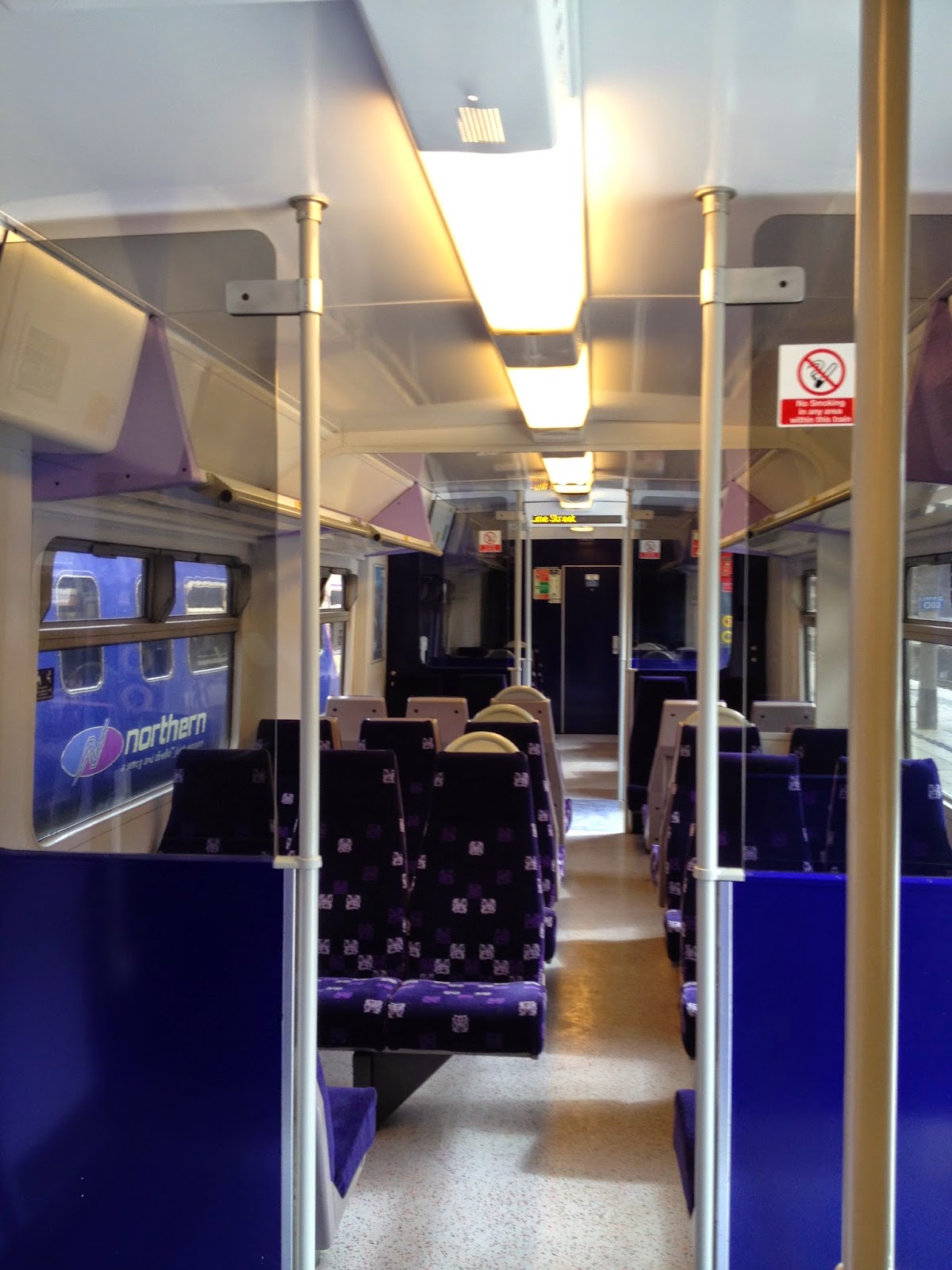 It was all weirdly familiar, like a lenticular portrait where you can see two things at once.  As we got going, especially on the fast stretch over the Chat Moss, I was simultaneously in the North and on Thameslink; I was thirty eight and sixteen.  Memory and reality in collision. 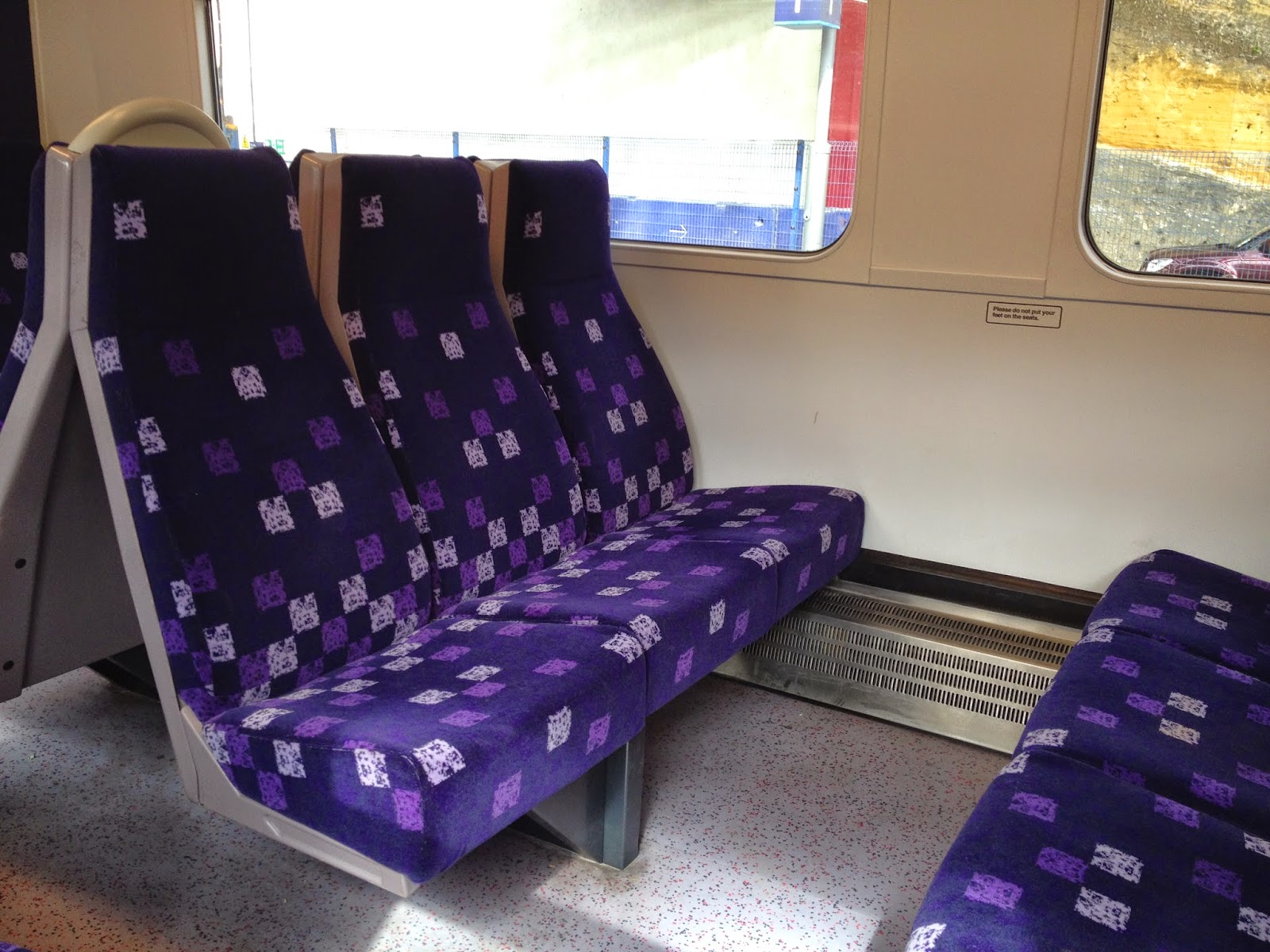 The trains are faster and quieter than the current diesel services, though they won't be at their full potential until all the slow old trains have been stripped out of the timetable - probably around December.  Then the travel time between Liverpool and Manchester will be cut severely, and about time too.  It's always taken a bafflingly long time to get between the two greatest cities in the North.  Making them an easily commutable distance apart will help break down some of the "them and us" between them. 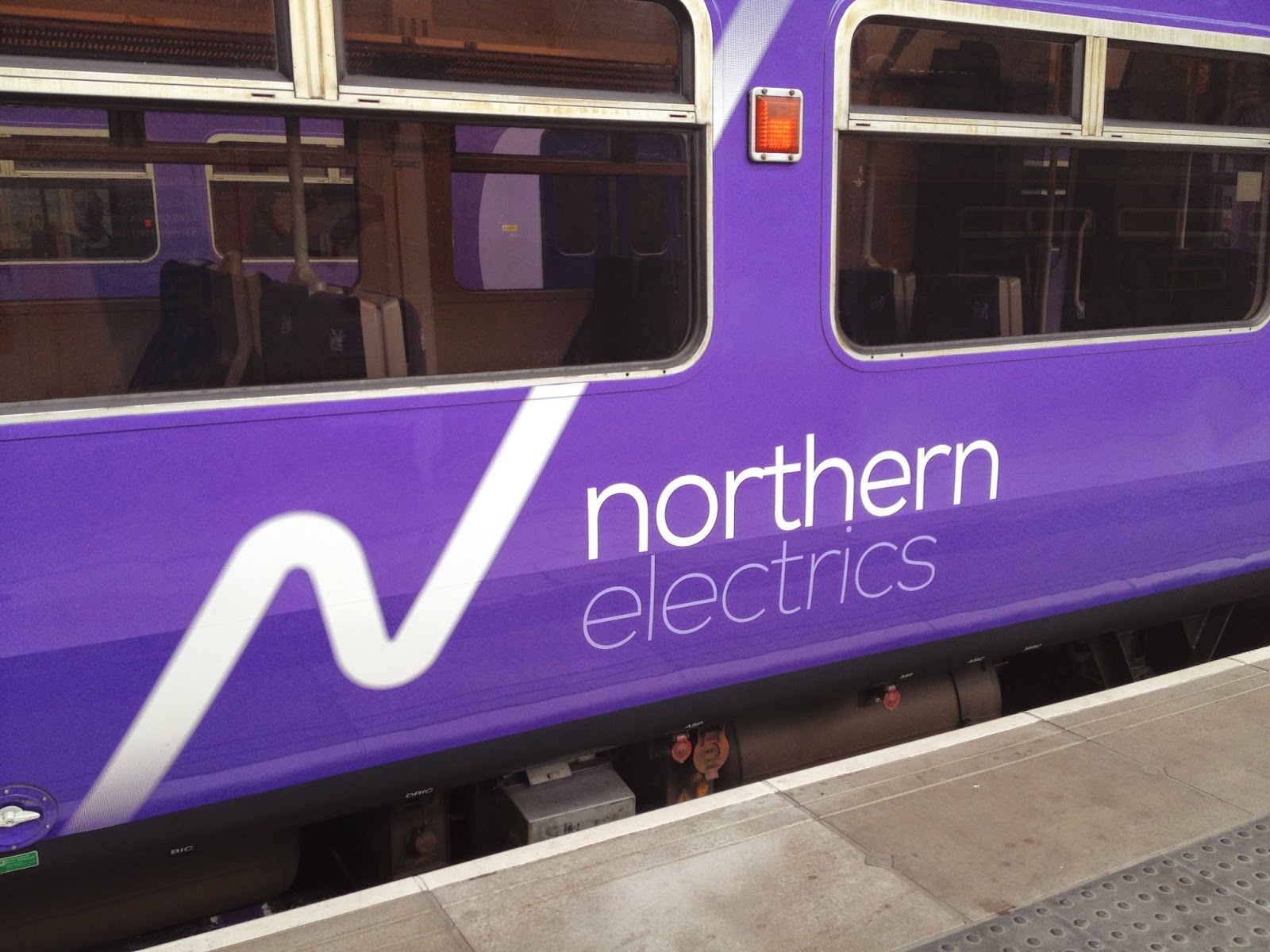 We rode the train all the way to Manchester Airport, the slightly-common computer voice being sure to tell us this was a Northern Electrics train.  It was certainly a smoother ride than I was used to over this route, though I will say these trains don't have the same beautiful electric whine as Northern's other electric services, over the Burnage line.  You might remember that I liked the noise of those trains so much I recorded it.  Those were Class 323s, and they have a soft, slow rise to their engine noise; the 319s are a little more mechanical and clunky.  Still, you didn't have to shout over them, and when we were held at a junction in Manchester, the whole train fell silent.  No more listening to the chug of a thirty year old diesel engine ticking over.

On the train back, which was 319363 by the way, I used the toilet.  These were always a tiny moment of hell on the Thameslink route; you'd open the door and find yourself trapped in a shit smeared cubicle with a pan bunged up with all the paper.  I was pleasantly surprised to find it was clean and fragrant (though the air freshener still had First Capital Connect written on it), and the graphic they've used over the window to give you a bit of privacy was surprisingly pretty. 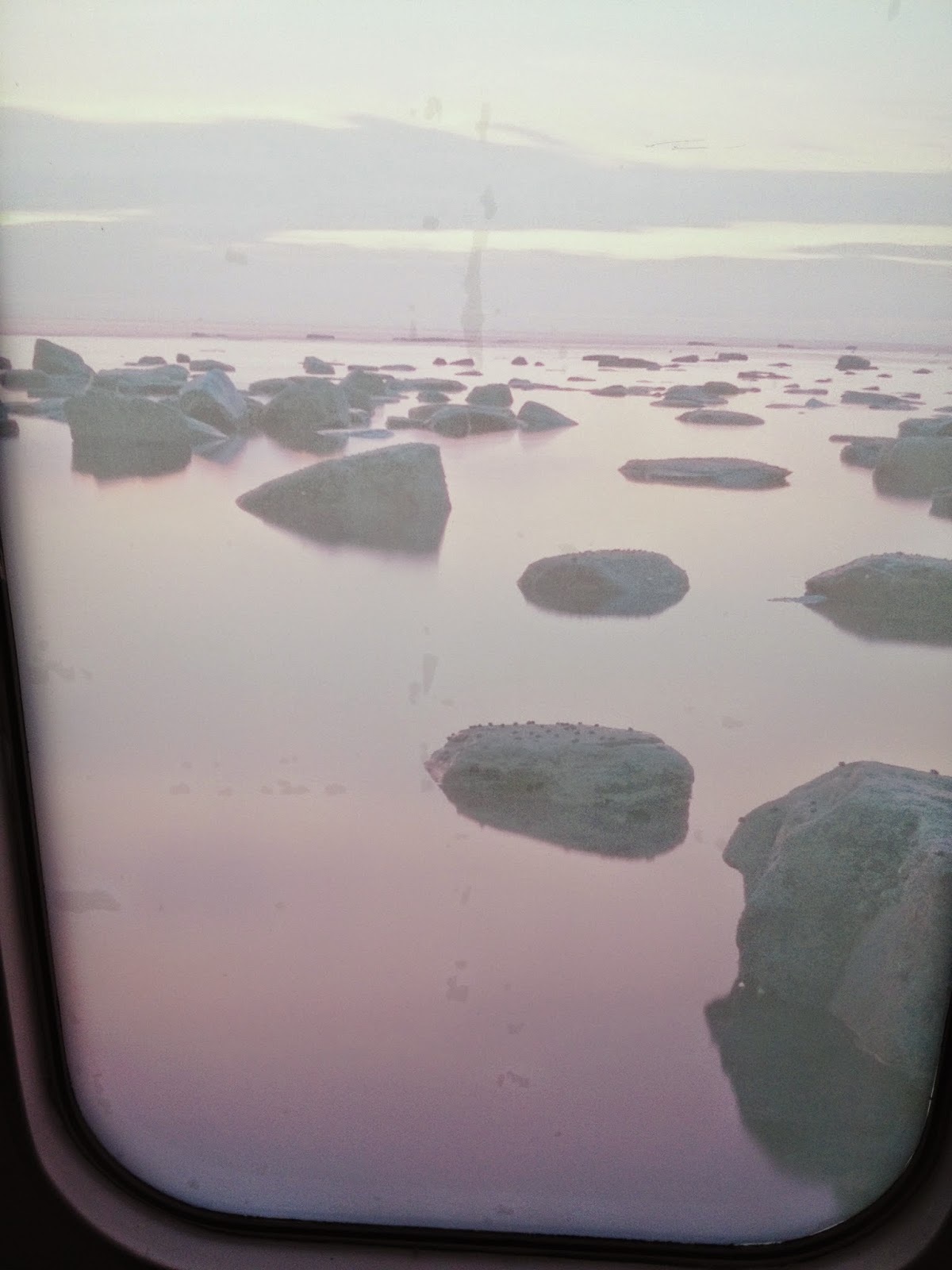 So those are the new electric trains to Manchester.  As the year goes on, more and more of them will be rolled out, including taking over the Preston services, so what's special right now will quickly become ordinary.  Soon people will complain about these trains the way they complain about all trains, but I like them, and not just because they made me feel young again. 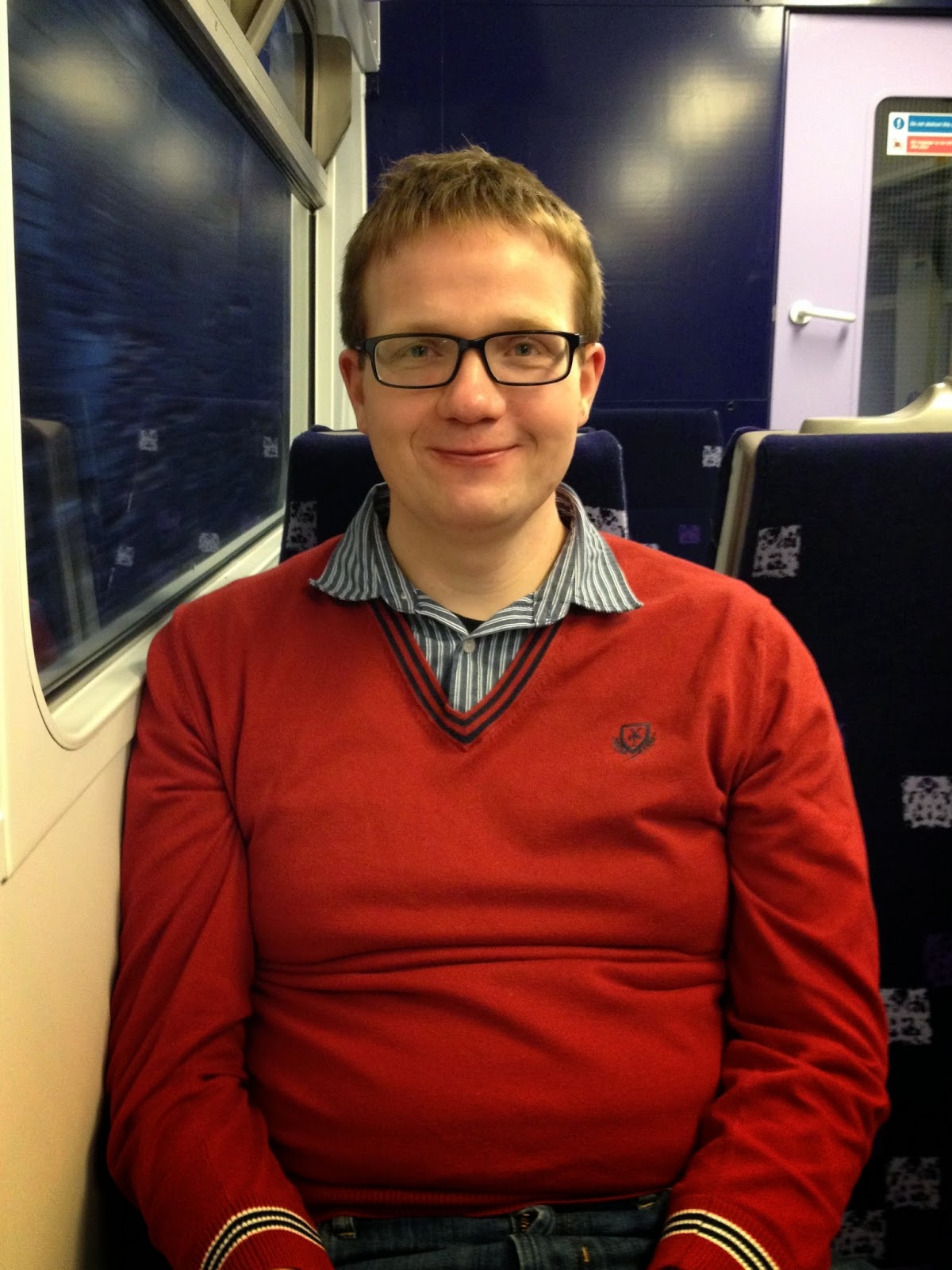 I hope those toilets remain nice. There are few trains in London with worse toilets, although FGW's non HST fleet are in other league.

I do love the Magic Zanussi sound of the 323s. They were a revelation on the Birmingham Cross City line in the mid 90s.