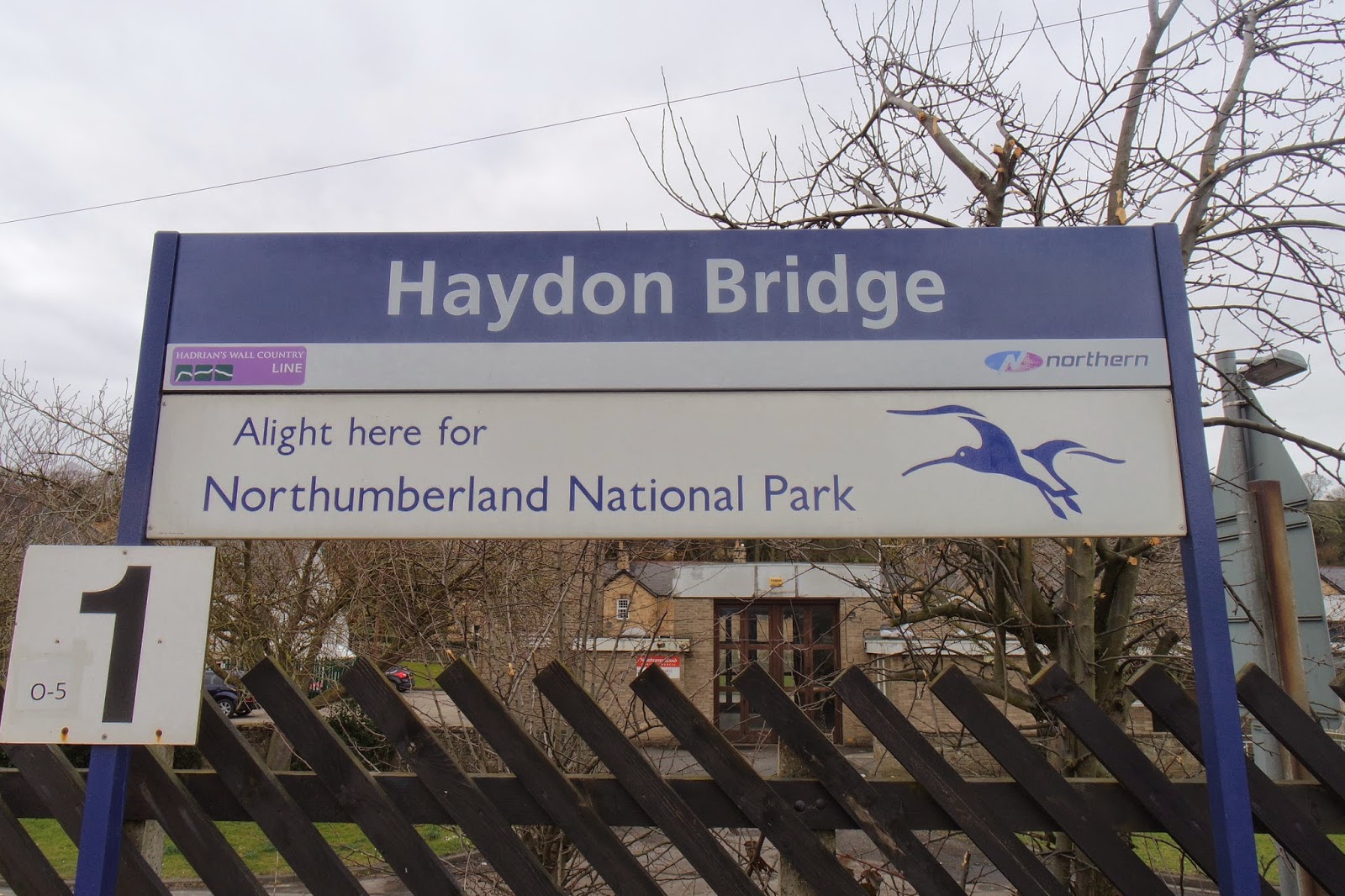 You too, Haydon Bridge?  That's just lazy.  Get your own ALF. 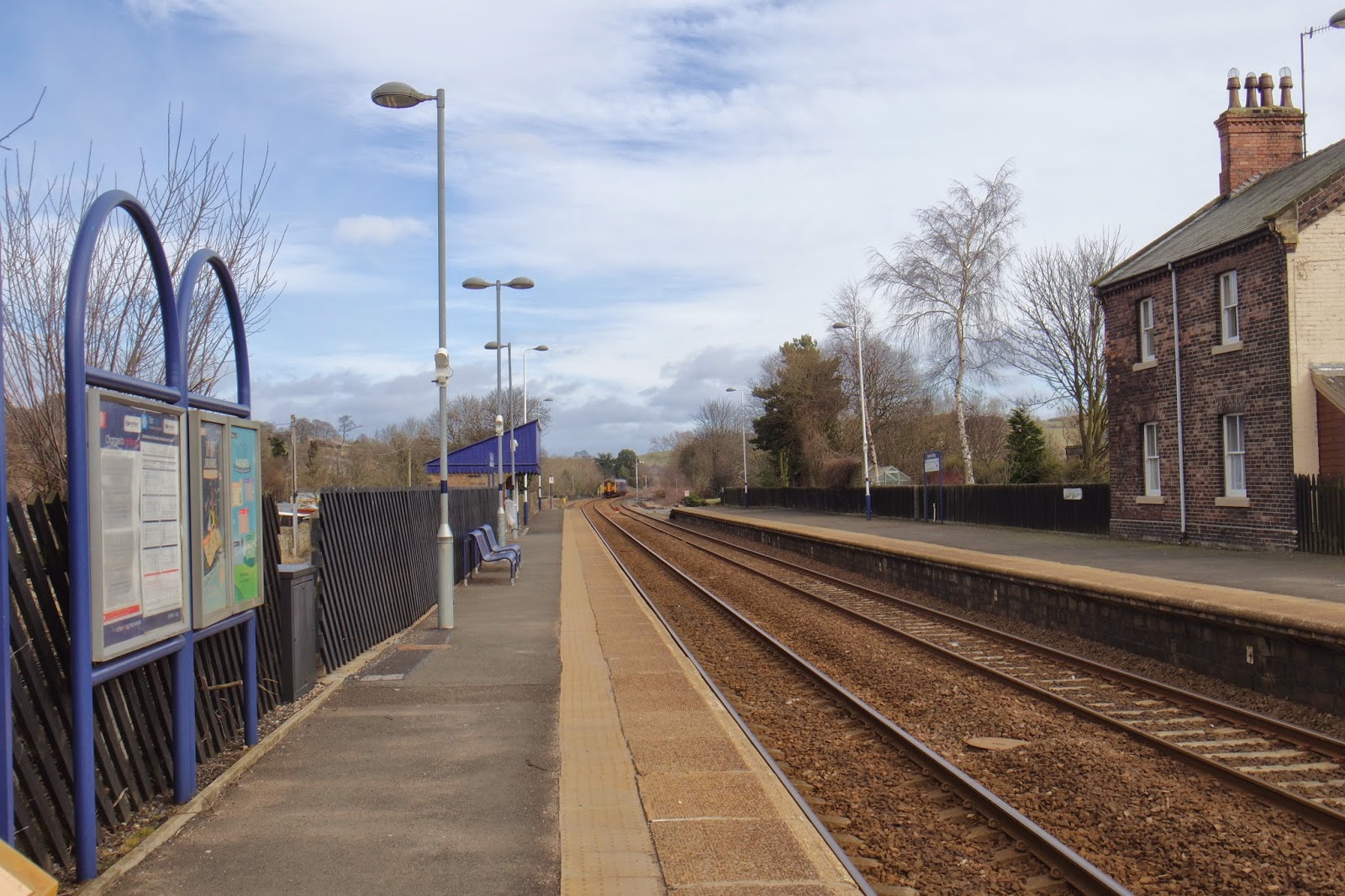 I got off the train at Haydon Bridge with a young mum with a pushchair.  She shoved the baby down the ramp with a determination that was quite frightening; I was surprised the child didn't get whiplash.  I let her get well away before I walked down and across the level crossing.  There was a police van parked there, with a camera on a ten-foot high pole poking out of the top.  At first I thought this was the latest incarnation of the selfie stick, an invention that must be destroyed for the good of humankind. 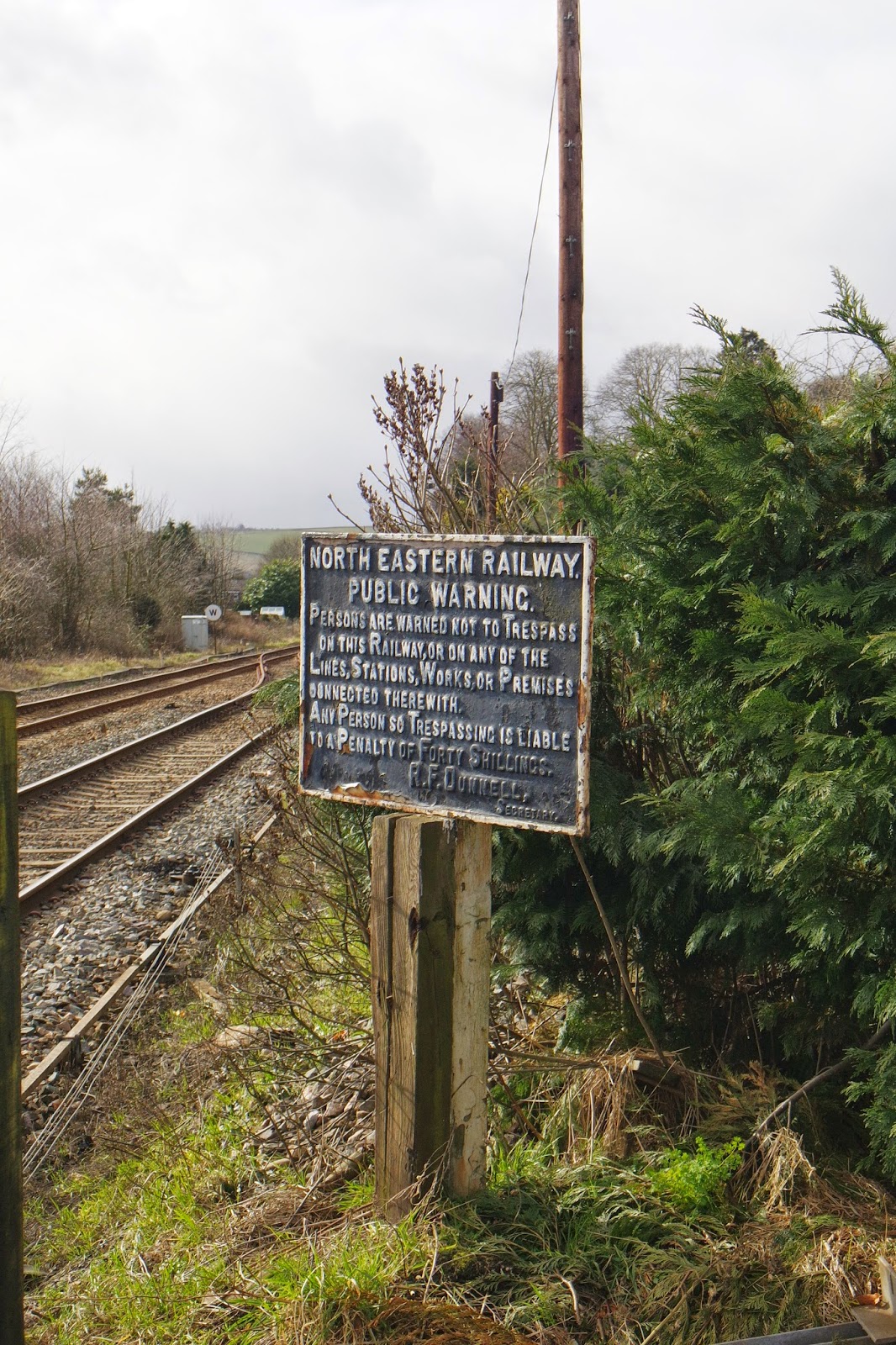 Closer inspection revealed they were filming the traffic as they passed over the level crossing.  They said it was for safety purposes, but I'm pretty sure they were just doing it so they could flog any horrifying footage of cars being crushed under a train to Police Camera Action.  Now the cuts in police funding are really starting to bite, they've got to make money where they can.  It made me feel like I was being watched as I took my sign picture. 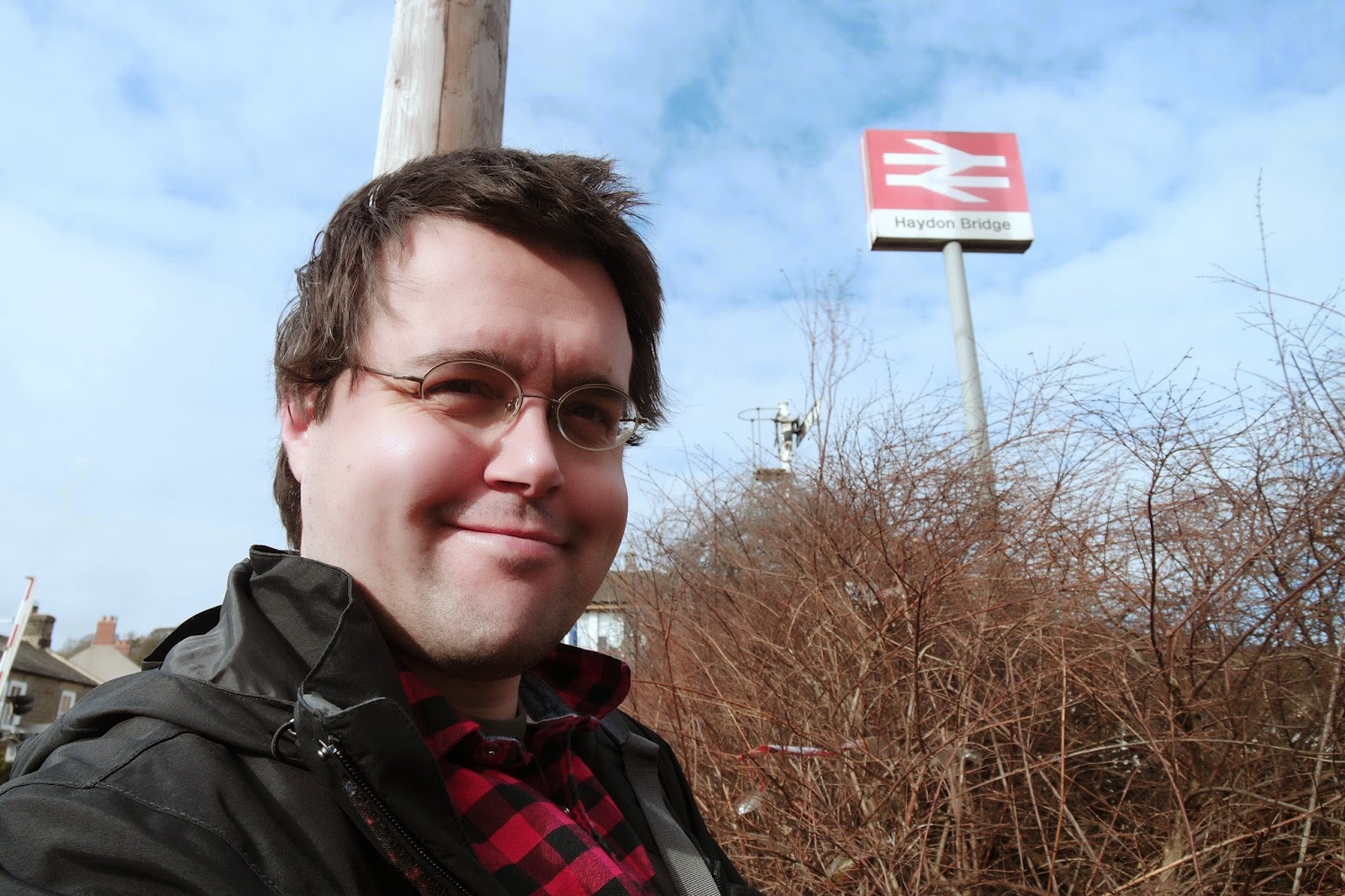 Actually I was being watched, by a toothless old man who grinned at me as I packed my camera away.  I blushed and carried on into the heart of the village.  I had an hour to kill until the next train onwards so I thought I'd look around for something to catch my attention, until I gave in and went to the pub.  There was an information board telling me about the "John Martin Heritage Trail", a walk round the village devoted to its most famous son.  I had never heard of John Martin - the 19th century's most popular painter apparently - and a quick look at his Wikipedia page reveals he moved out of Haydon Bridge when he was 17, so I imagine the trail was pretty short.  I didn't bother, which is a shame, because that same Wikipedia page reveals that his brother tried to burn down York Minster, and I wondered if they'd mention it. 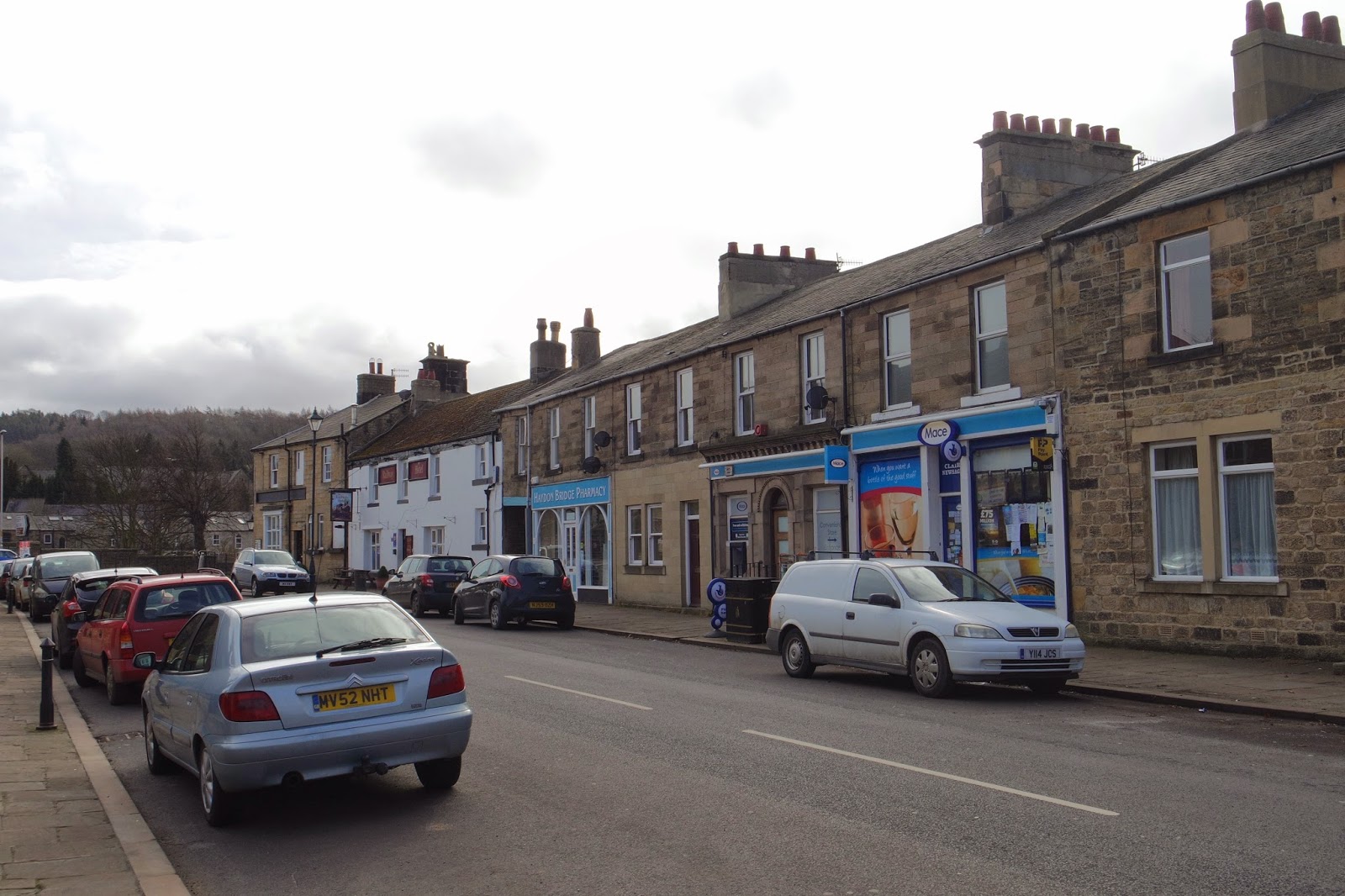 Unsurprisingly, the main attraction in Haydon Bridge is the bridge itself.  There are actually three now.  A few years ago, a bypass was built around the village to carry the A69 away from its heart, so that crosses the South Tyne to the west.  In the centre are two older bridges; the bridge built in the 1970s to carry the road traffic, and the old stone bridge which is now pedestrian only. 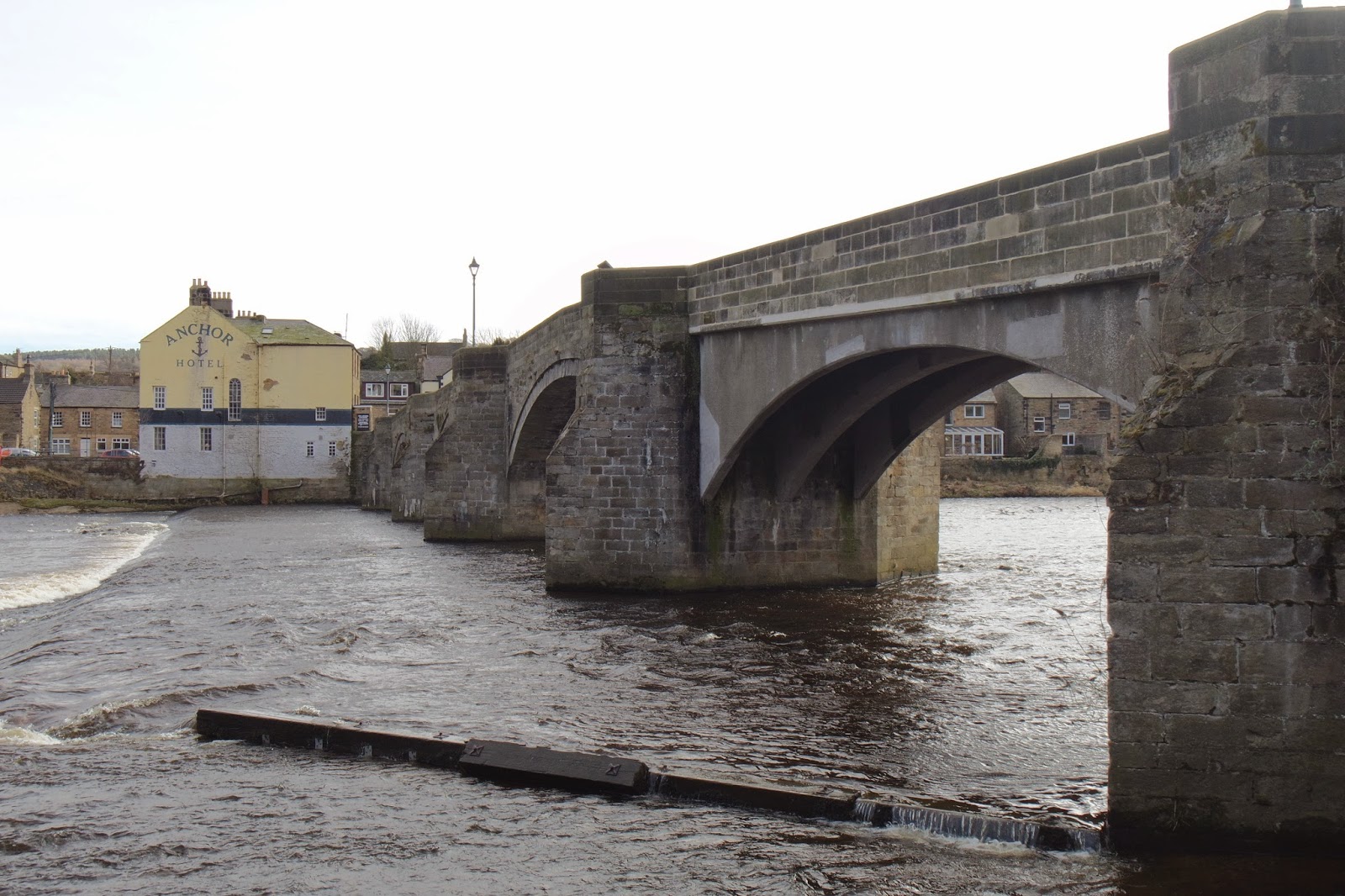 There's been a bridge here since the 14th century; various versions of it have been burnt down by marauding Scots, swept away in floods, and collapsed without warning.  The current version dates from 1910. 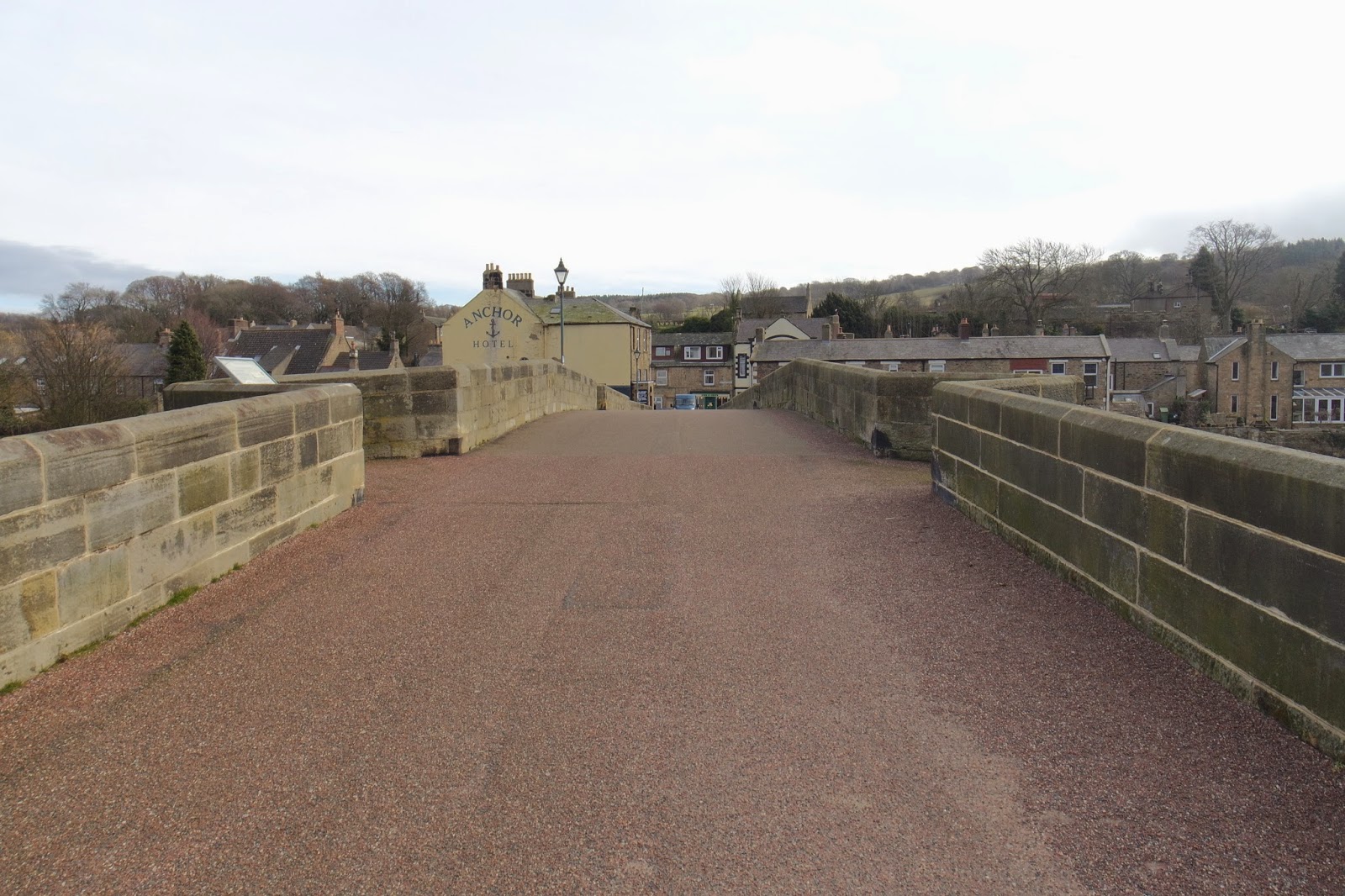 As a pedestrian bridge, it's wide and spacious, but as a road bridge it was hopeless.  Cars could only pass in one direction at a time, held back by traffic lights, which was a significant bottleneck.  The 1970s construction sweeps across the view, and has a simple charm that compliments its older brother. 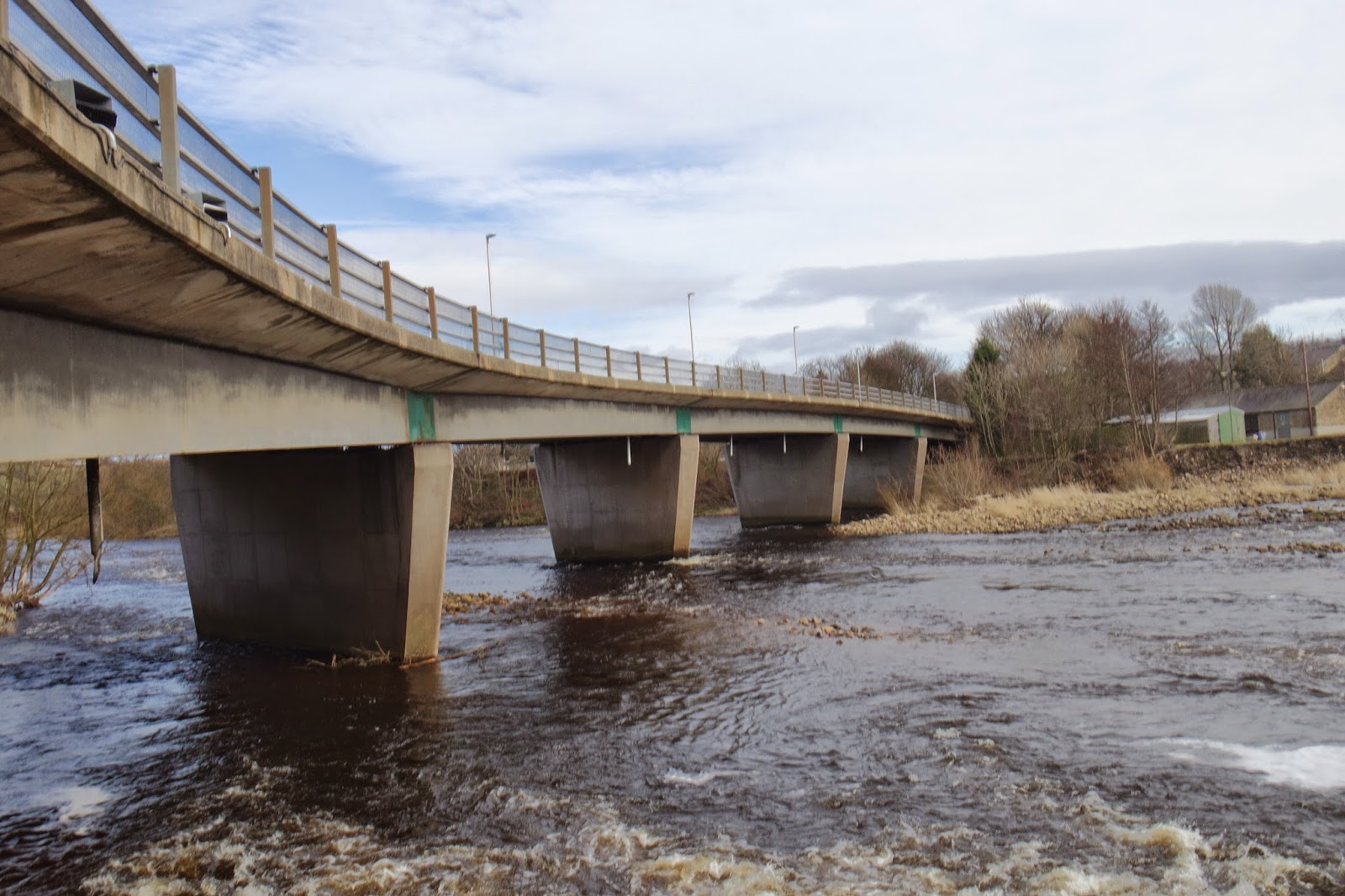 Now there's no traffic passing through the village, it feels like a sleepy, slightly abandoned place.  The south bank, which hadn't been a through route for forty years, had a chippie and a pub, but there wasn't much life.  A workman huddled on the doorstep of the Anchor Inn, puffing on a cigarette.  I was delighted to spot that the road was named Shaftoe Street, after the former MP and subject of the nursery rhyme Bobby Shafto's Gone To Sea. 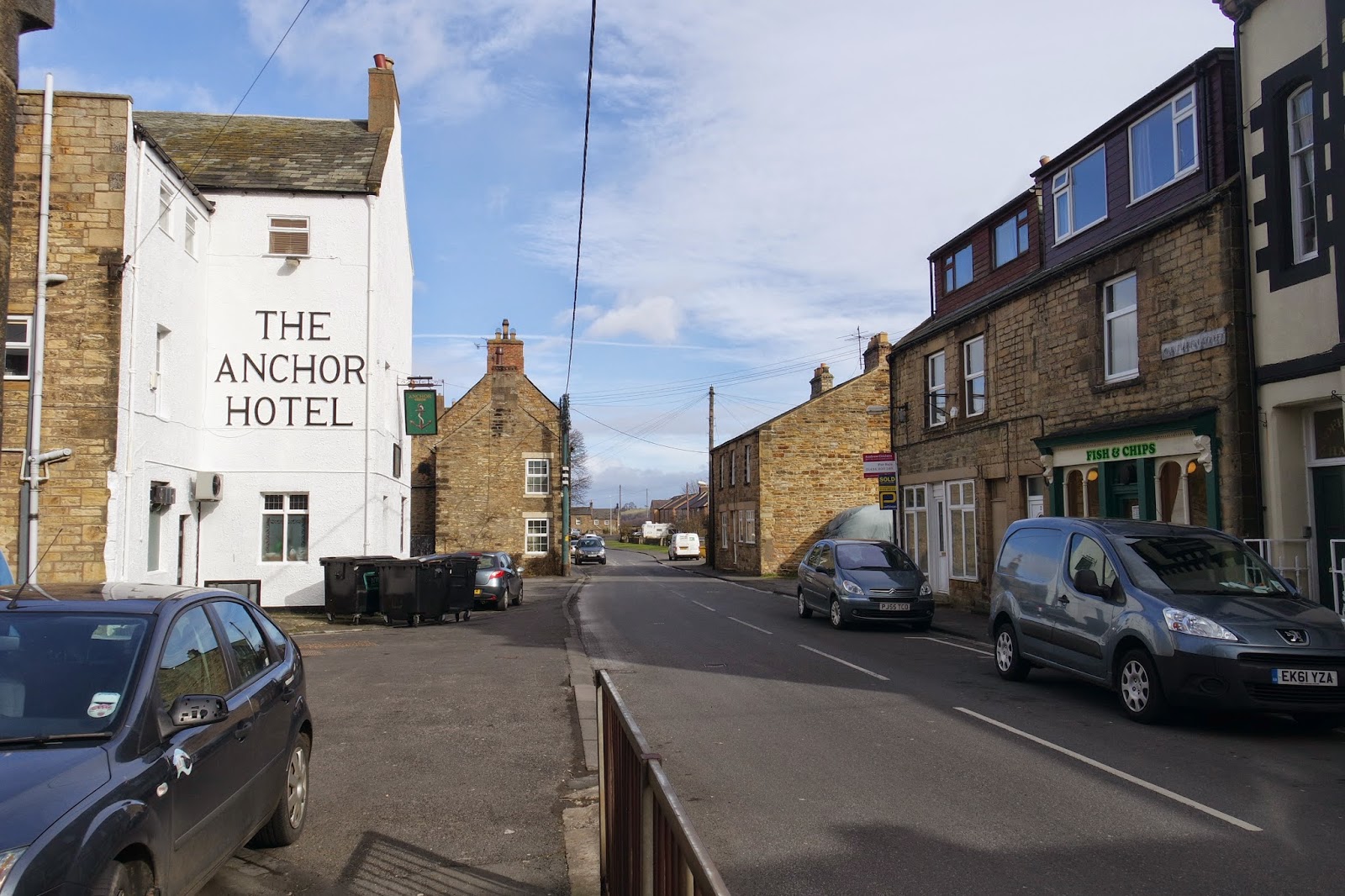 I considered a pint in the Anchor, but on the other bank was a pub called The Railway, and I decided they were more deserving of my train-based money.  As I crossed the bridge back a flurry of snow appeared from nowhere.  Seriously, I took the photo above, then literally two minutes later the skies turned grey and I was being pelted with frozen water.  Given I was right in the middle of a bridge at the time, it was a bit unnerving.  I made my way down to the subway under the road and there was a burly workman there, sheltering from the sudden precipitation and eating his chips. 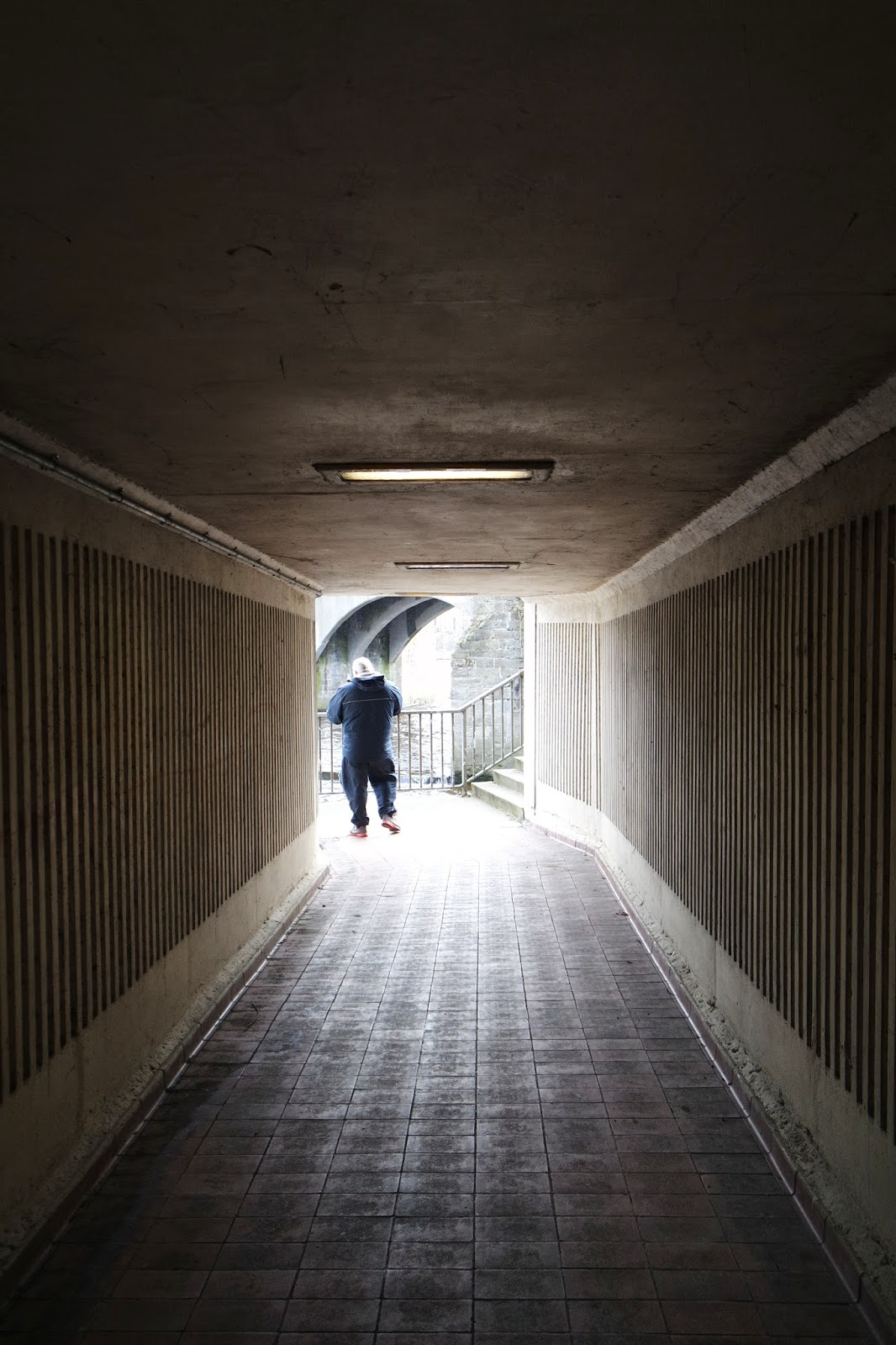 The Railway was a real boozer, a long thin room with a dartboard at one end and an electric fire at the other.  There was an old, refined looking man sitting at one end of the bar reading his paper, while a gang of chubby regulars gathered at the other end talking about - I have no idea why - Spanish Fly and midges.  The barmaid looked up from her neatly handwritten record of the Haltwhistle and District Darts League to serve me; as she poured me my pint, a little brown mongrel wandered up to me for a sniff.  I immediately trod on his front paw, making him yelp in pain, because I am a clumsy twat.  I bent down and ruffled his head and said "sorry mate!", but when I looked back up the barmaid was smirking and my face was white hot with embarrassment.  I found a corner away from the throng and hid away. 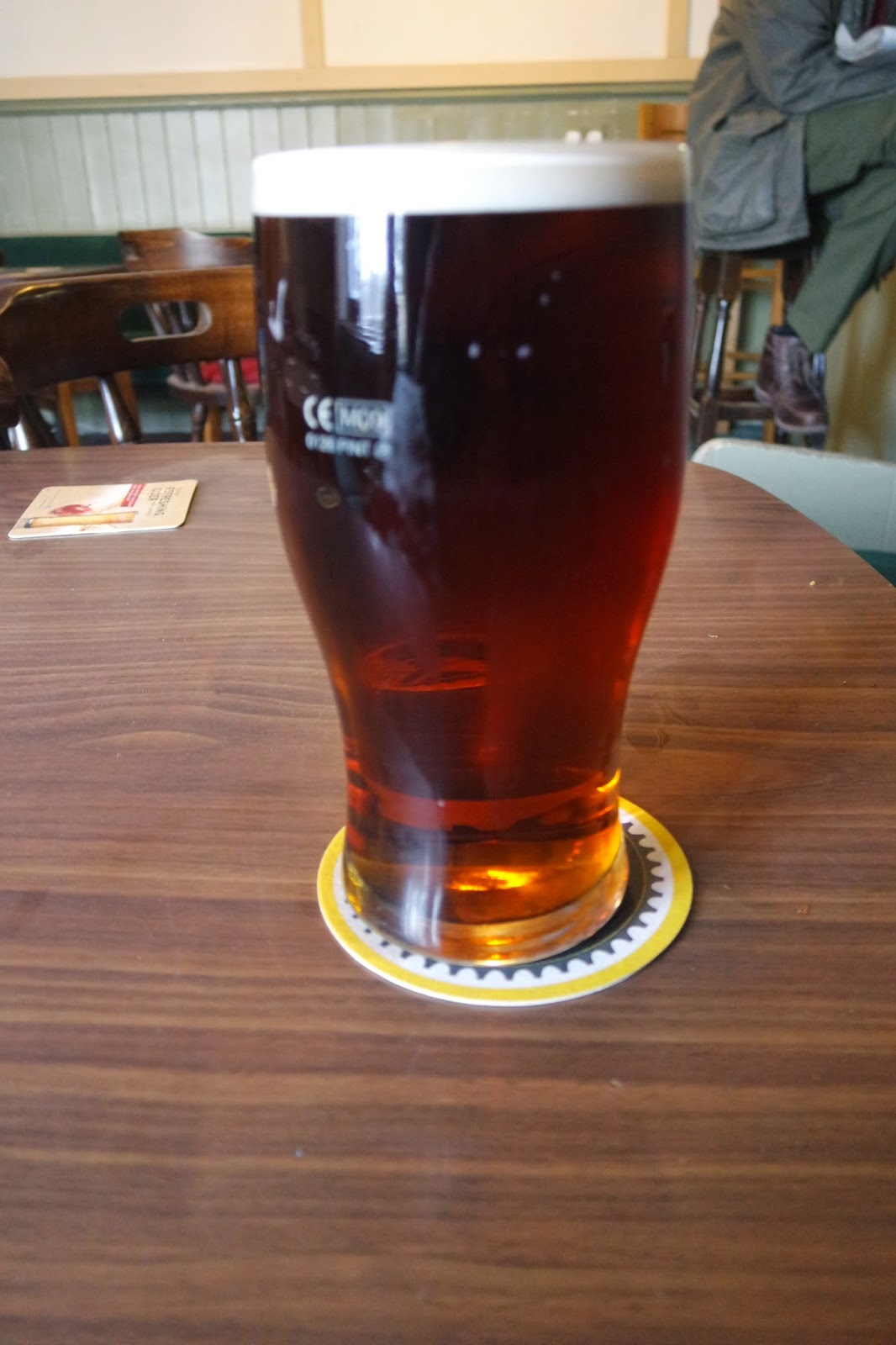 Off to one side, with Love Shack playing on the 80s music station, it was harder to tune into the men's conversation.  They had sing-song Northumbrian accents, a bit of Geordie here, a bit of Scots there, rising and falling with an undertone of seriousness.  For a while I just listened incomprehensibly to the sounds of their voices, until I finally managed to pick up on it, like on Star Trek when the Universal Translator takes a while to kick in to the newest bumpy-foreheaded alien's cadences.  That was when I realised they were talking politics, and the kind of politics that make my woolly liberal scalp itch.

Food banks were "too fuckin' easy" to get stuff from.  People on benefits were "fuckin' scum" because they spend some of their money in the pub.  (I should point out it was two thirty in the afternoon, and none of the gentlemen in question seemed to be in any rush to get to work).  "I've gorra coupla mates who dan community service," said one of them, before saying that the work they had been given to do was inadequately punishing because of "fuckin' human rates".  Inevitably Nigel Farage came up, and they said that he was on the right lines, stopping all these immigrants.

"Of course," said the refined man at the end of the bar, looking up from his paper, "the problem isn't the Romanians.  It's the Indians and Pakistanis."

"Them doorty bastards," said another, shaking his head.

I should have stood up and challenged them, of course.  Pointed out the basic flaws in their arguments, asked for facts to support their assertions, asked them exactly why they weren't working right now.  I didn't.  I'm a wet. over-educated liberal who shies away from confrontation, especially when it's with a group of men from a different class to me.  I swallowed my pint and slipped out as quickly as I could. 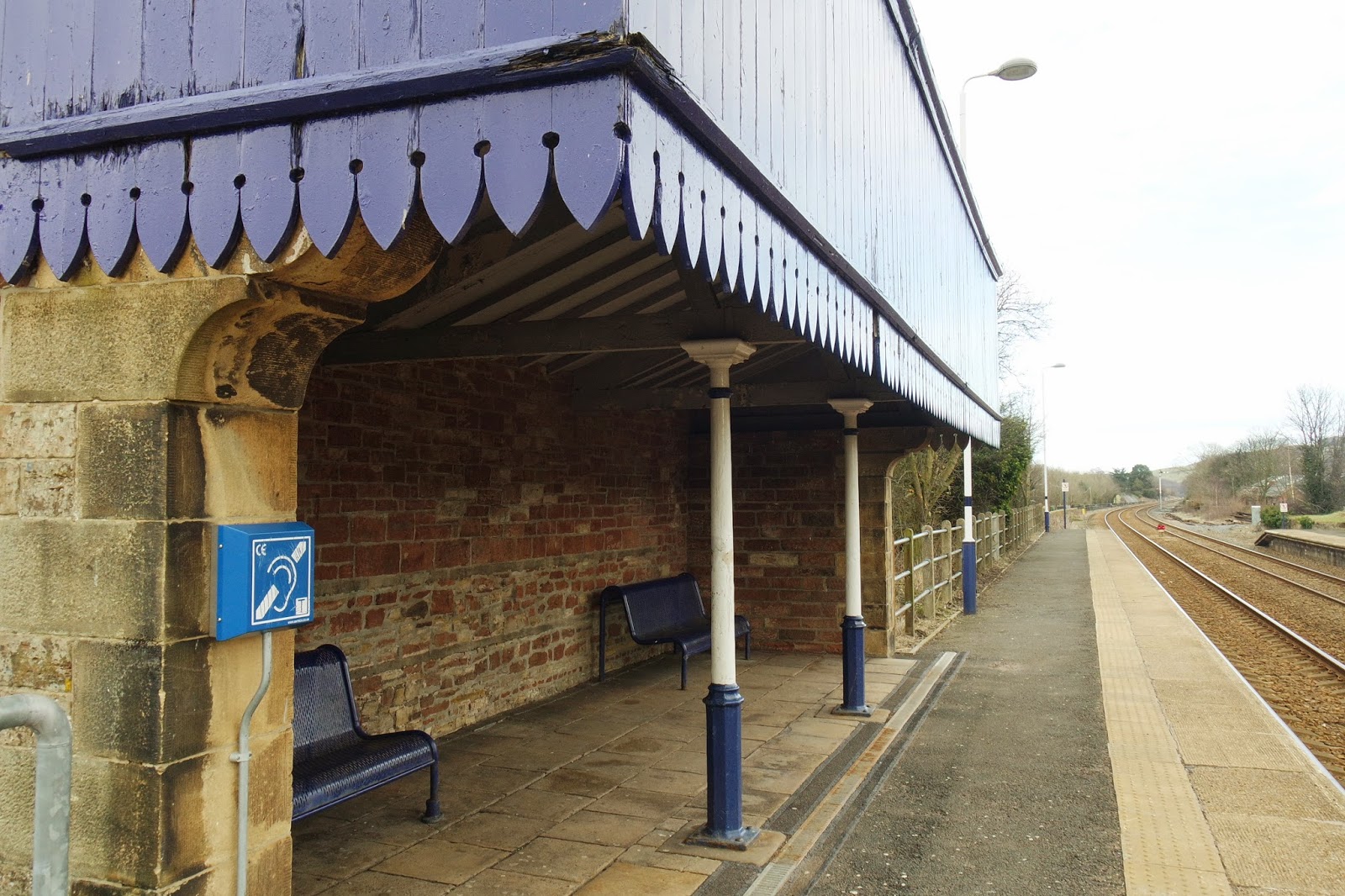 Back at the station I could unclench my buttocks and relax again.  I'm sorry Haydon Bridge; I know you shouldn't rush to judge, but I immediately marked down your entire community as a bunch of racist neanderthals and decided never to come back.  Hexham would be better, I was sure of it. 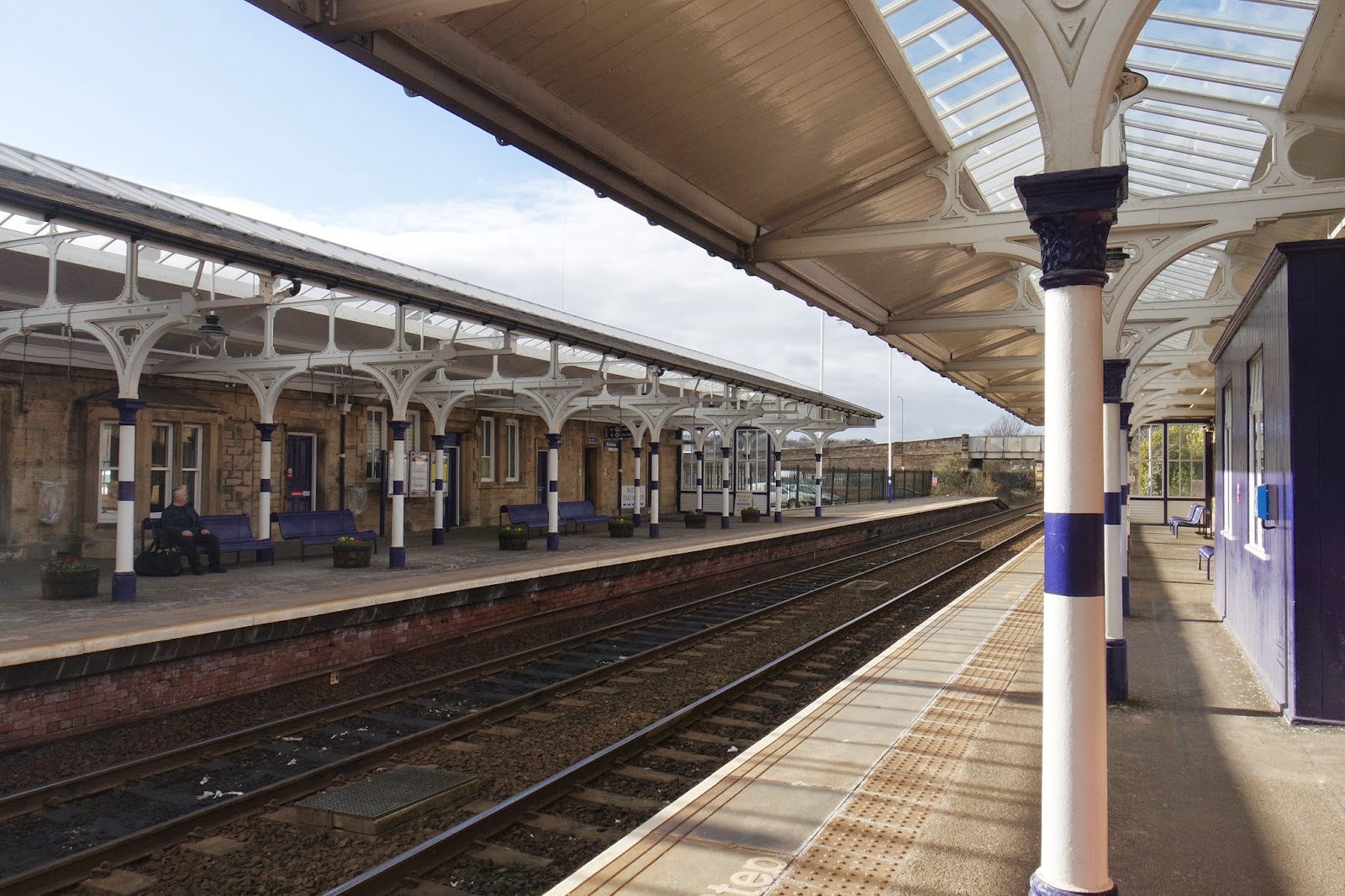 It certainly had a better station.  There was ironwork and delicate glass, all freshly painted and gleaming.  Hexham gets services from Scotrail as well as Northern, so it's got a busier, more frenetic feel to it. 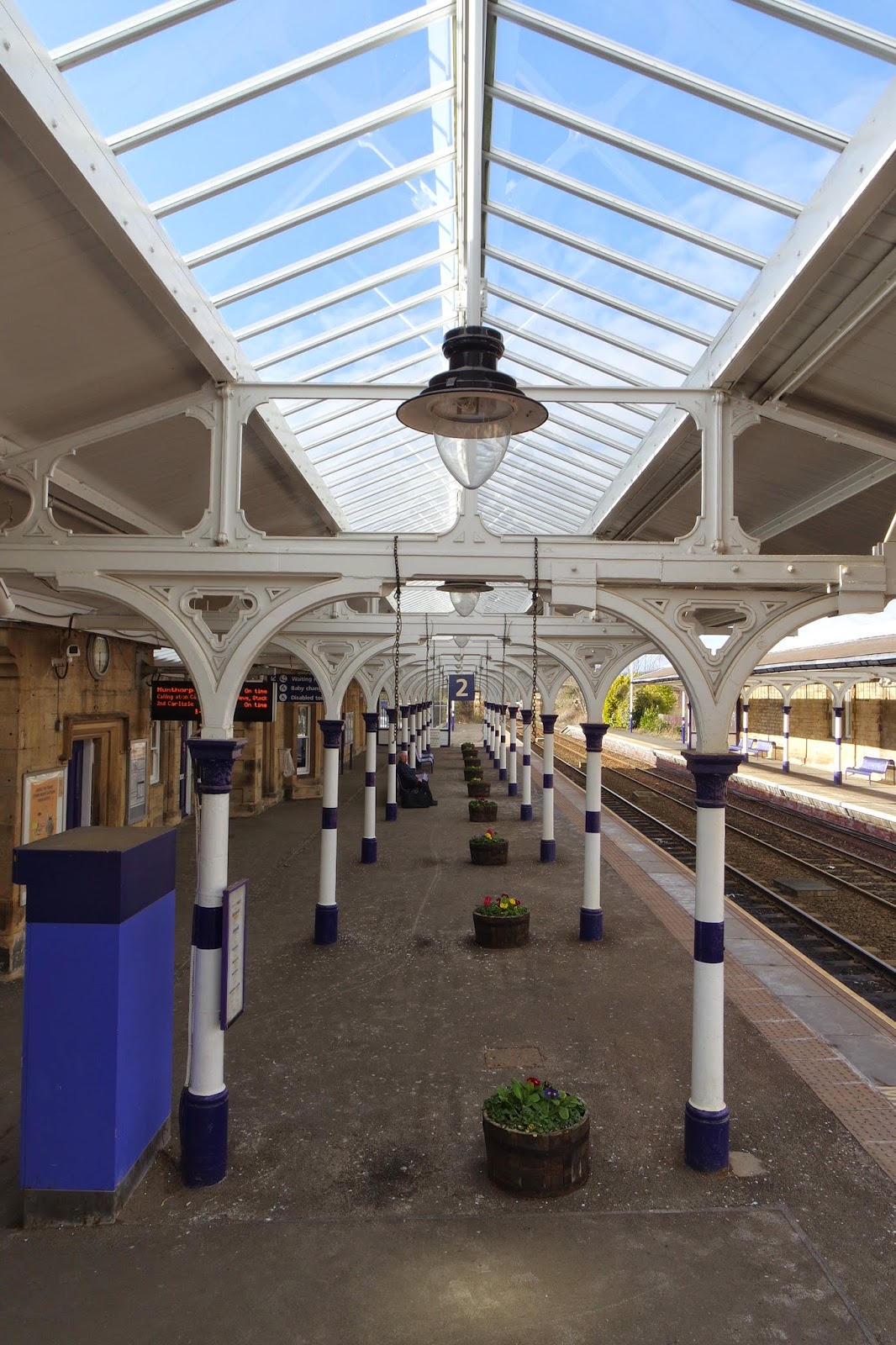 I mean, it's still the station for a small town in the north-east, not Waterloo, but it was nice to not be the only person on the platform for once.  I walked out through the (working, open) ticket office in search of the station sign.  My attention was immediately caught by a photocopied newspaper article that had been laminated and strapped to a lamp post outside. 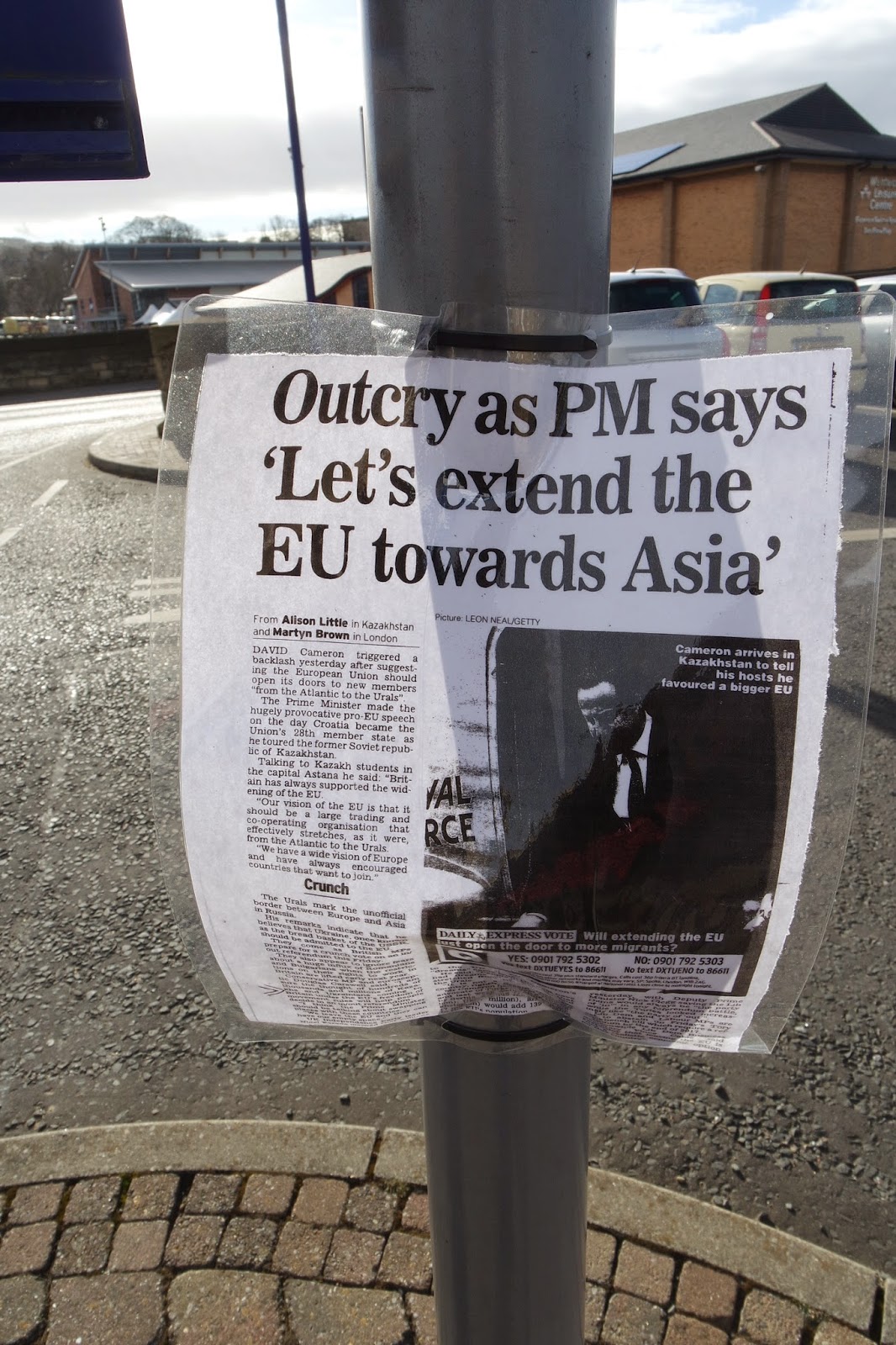 With a sigh, I walked past the Waitrose and into the centre of the town.  I'd probably have really liked Hexham if the first thing I'd seen on arrival hadn't been a dopey rant from the Daily Express.  As it was, everything had a coloured filter over it - a very white filter. 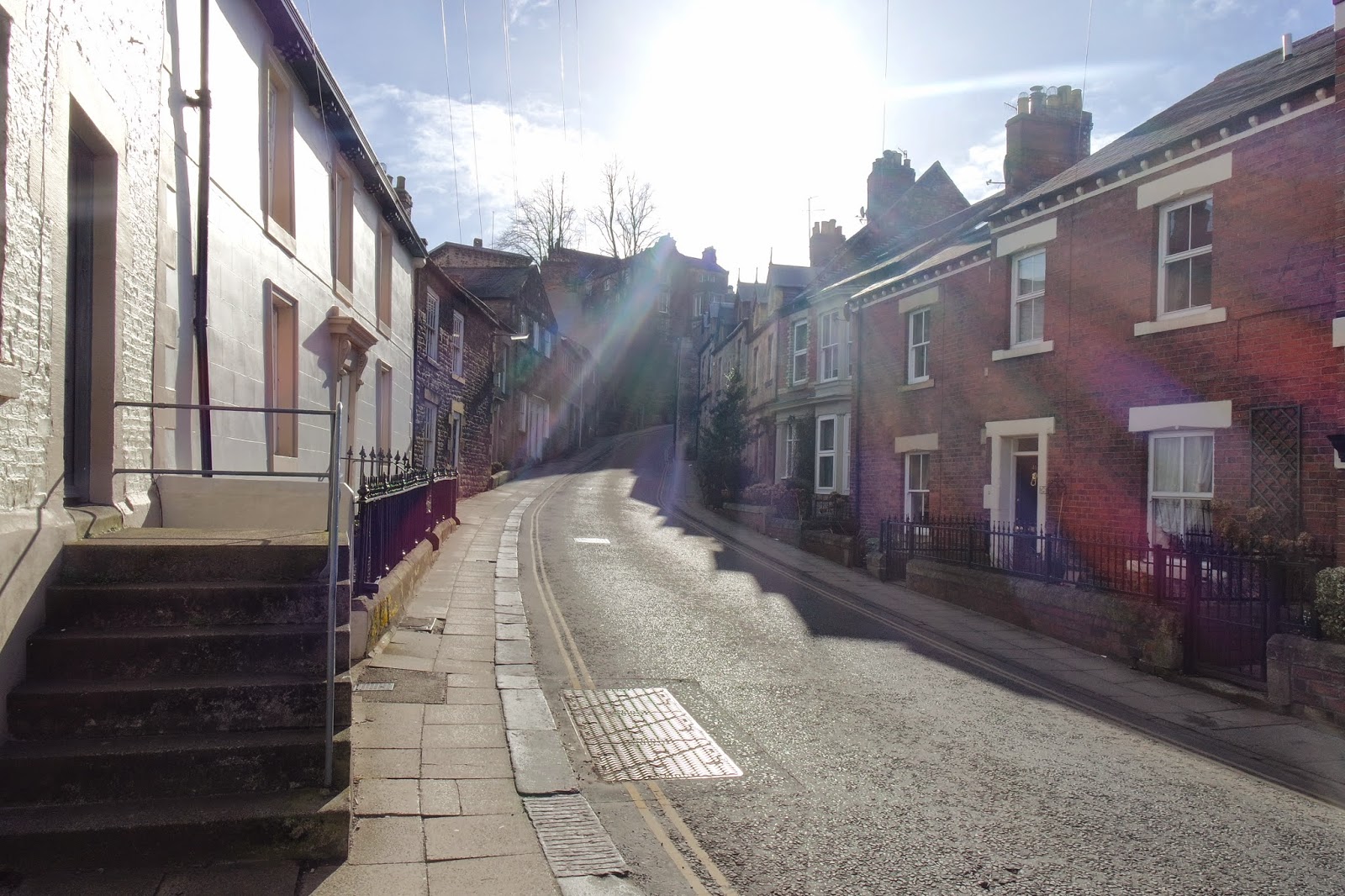 I clambered up a steep hill to the market place.  It was genuinely medieval in feel.  Hexham Abbey presided over one end, with a ramshackle stone gatehouse at the other.  There was a fruit and veg stall and a market cross. 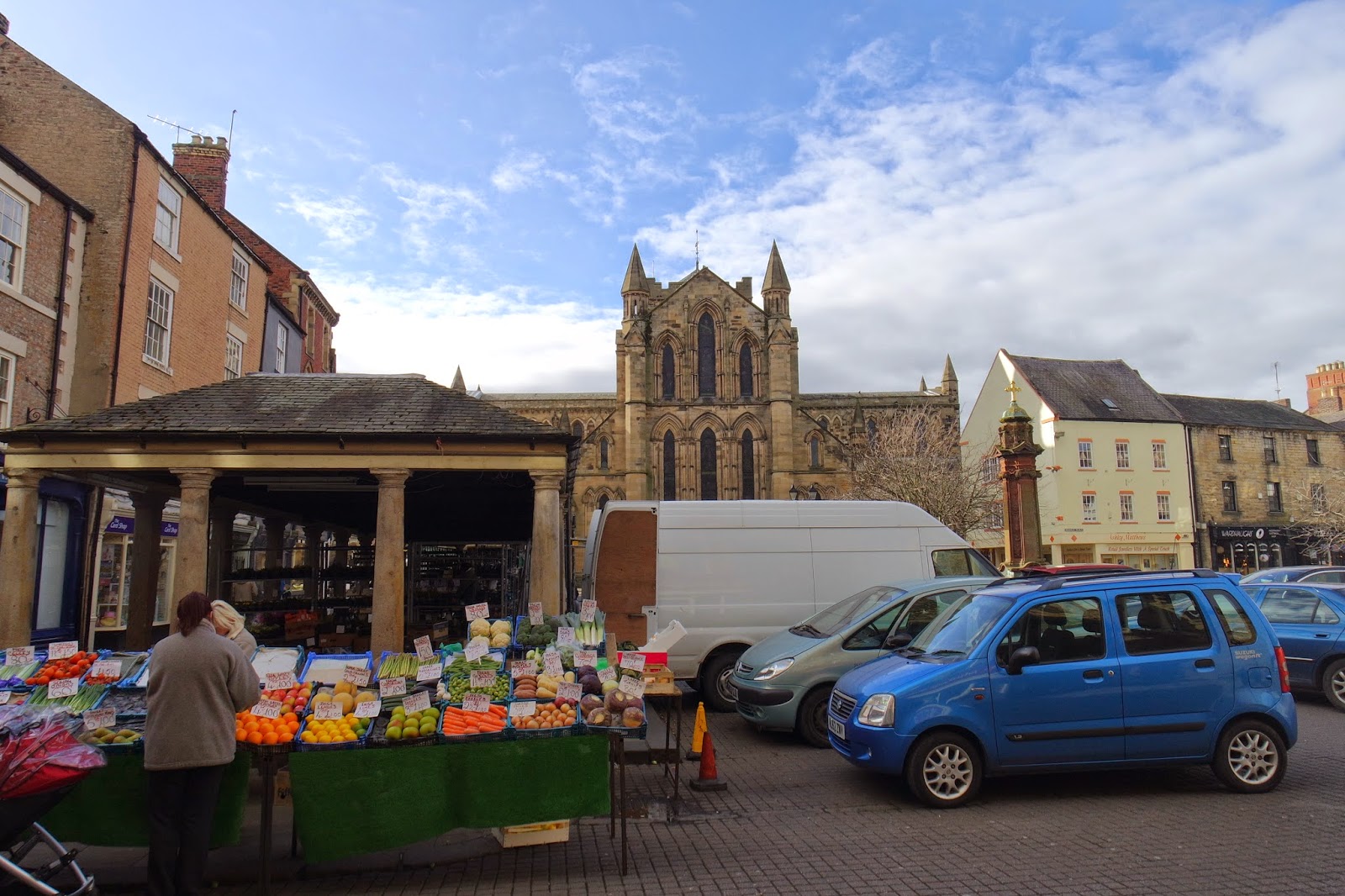 Behind it were twisting, old-fashioned streets, thronged with shoppers and decent shops.  A department store, a Waterstones, perhaps the classiest Poundstretcher that has ever existed: 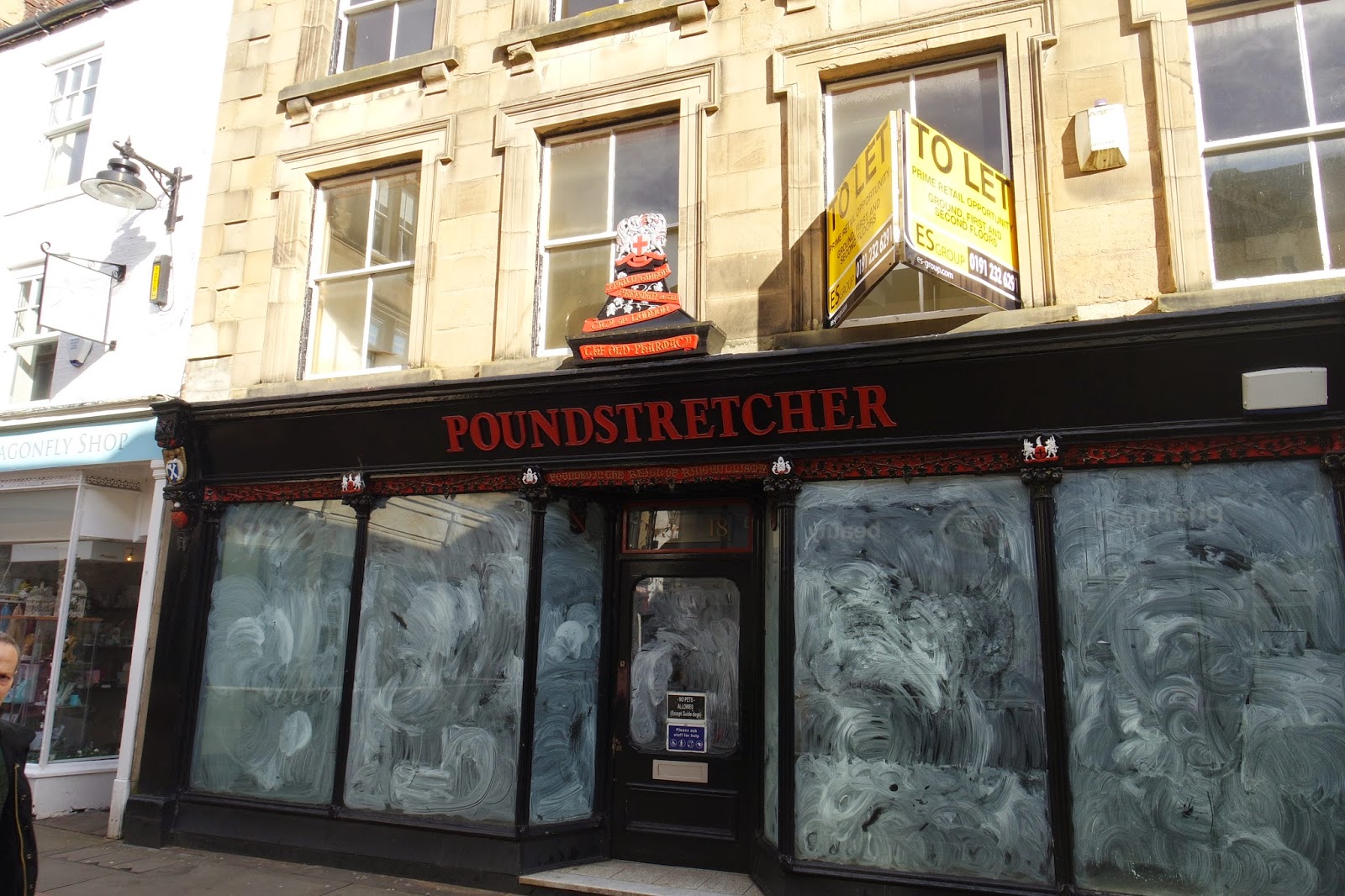 That they couldn't make it work in Hexham makes me think it's a really classy town, apart from its right wing leanings; it's been Tory round here since the twenties, and the Conservative and Unionist Club had a prominent frontage by the Abbey.  There was also my nemesis, the Edinburgh Woollen Mill, a sure sign that a town is ever so slightly up its own arse. There isn't an Edinburgh Woollen Mill in Liverpool, put it that way. 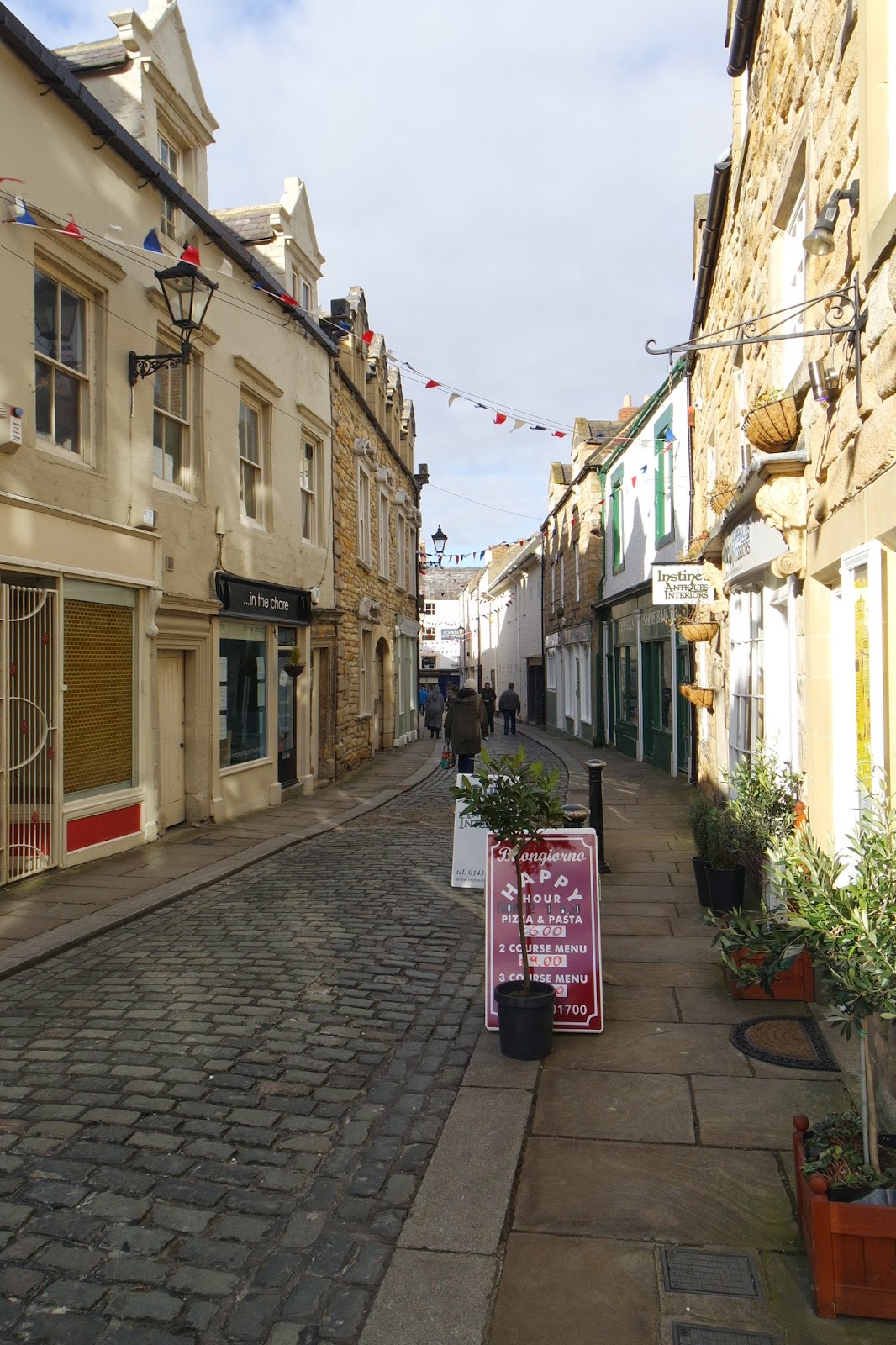 After a couple of circuits of the town centre, I'd grown tired of its prettiness, so I found a pub.  I braced myself for an onslaught of racial invective and possibly a bit of low-level homophobia as well, so I was pleased that it was quiet and calm.  In fact, I think the barmaid may have been a lesbian; she was certainly very touchy-feely with one of the lady patrons, and there wasn't a single murmur of dissent from the other customers.  At the last minute, Hexham had saved itself from being dropped into the same bin as Haydon Bridge.  Well done. 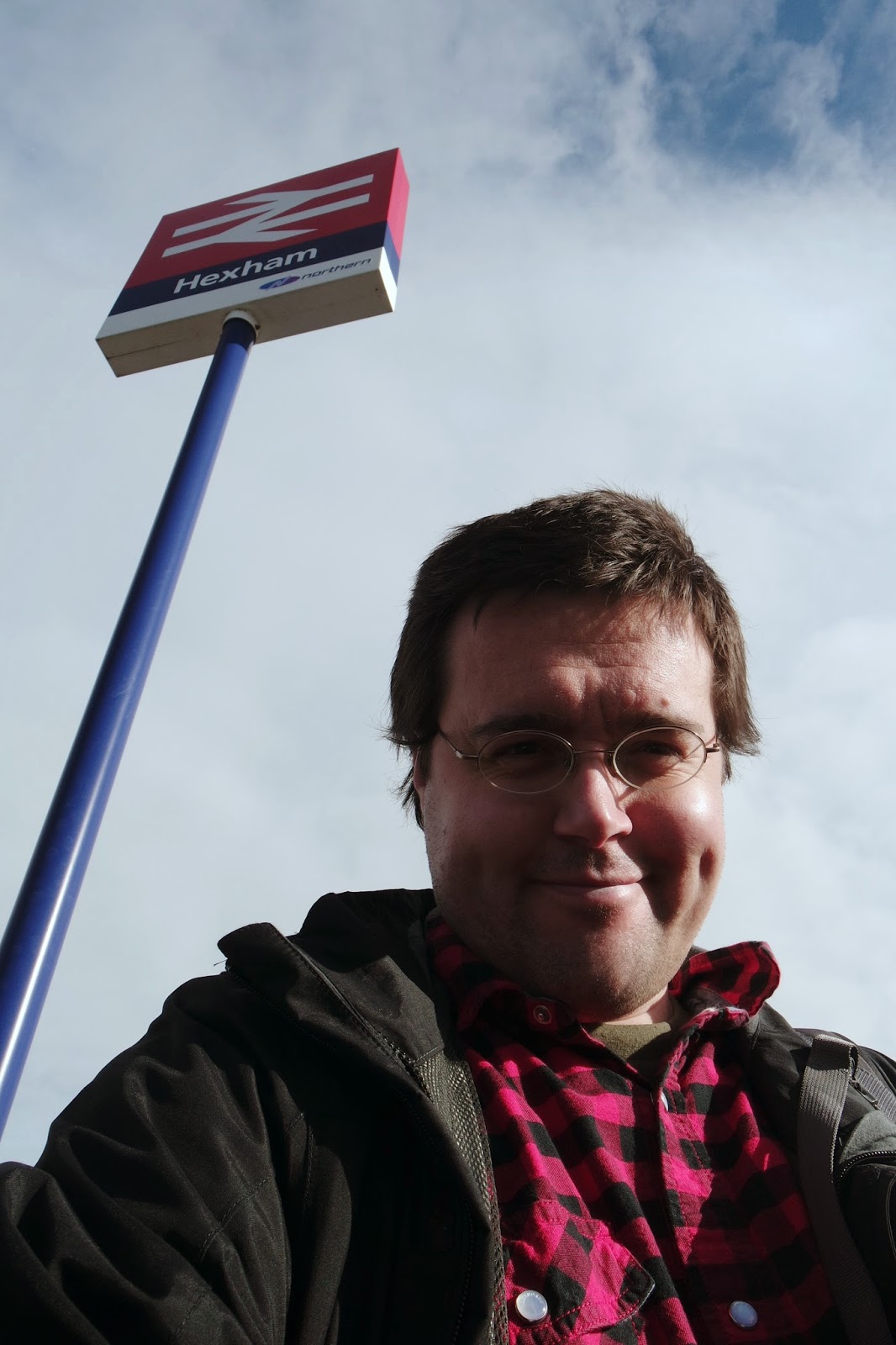 Hexham and Corbridge are pretty smart: Newcastle execs commute in from the Tyne Valley if they have more taste than to live in Darras Hall. And here's a Northumberland country set too.

There was a big fuss recently about the proposed demolition of Hexham's railway stables. Thankfully, they're to be preserved at Beamish.

"Hexham gets services from Scotrail as well as Northern"

As do the other stations you've mentioned on this line. Northern and Scotrail share some units at peak time, so there are a couple of trains that run through between Glasgow and Newcastle, but change between Scotrail and Northern staff at Carlisle. The train is technically a Northern train between Newcastle and Carlisle, and a Scotrail train between Carlisle and Glasgow.

Thank you Pedant, but I didn't understand a word of that...

I visited Hexham on some sort of day ranger in OCT 2013 prior to going to footie at Hartlepool, they were painting all those white post when I was there. I arrived on ScotRail and departed on Northern rail