Day One: Pottering About 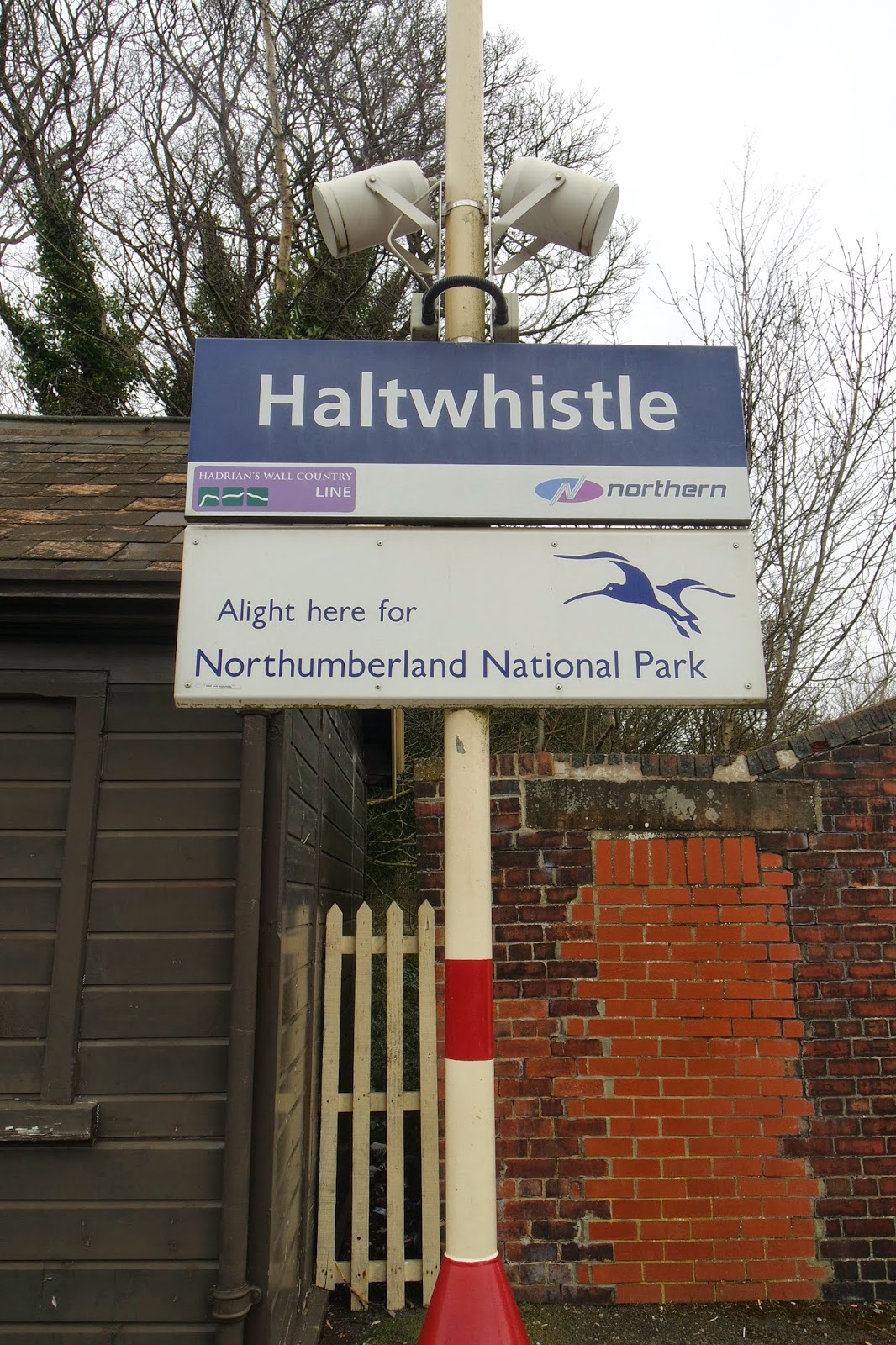 It was so nice to alight at Haltwhistle to find an Attractive Local Feature board.  It's almost a lost art.  So many stations have turned over their sign to a bit of naff sponsorship - "Bolton: Home to GK Metalworks" - and it was good to see a sign that promoted a local beauty spot.  More of this, please. 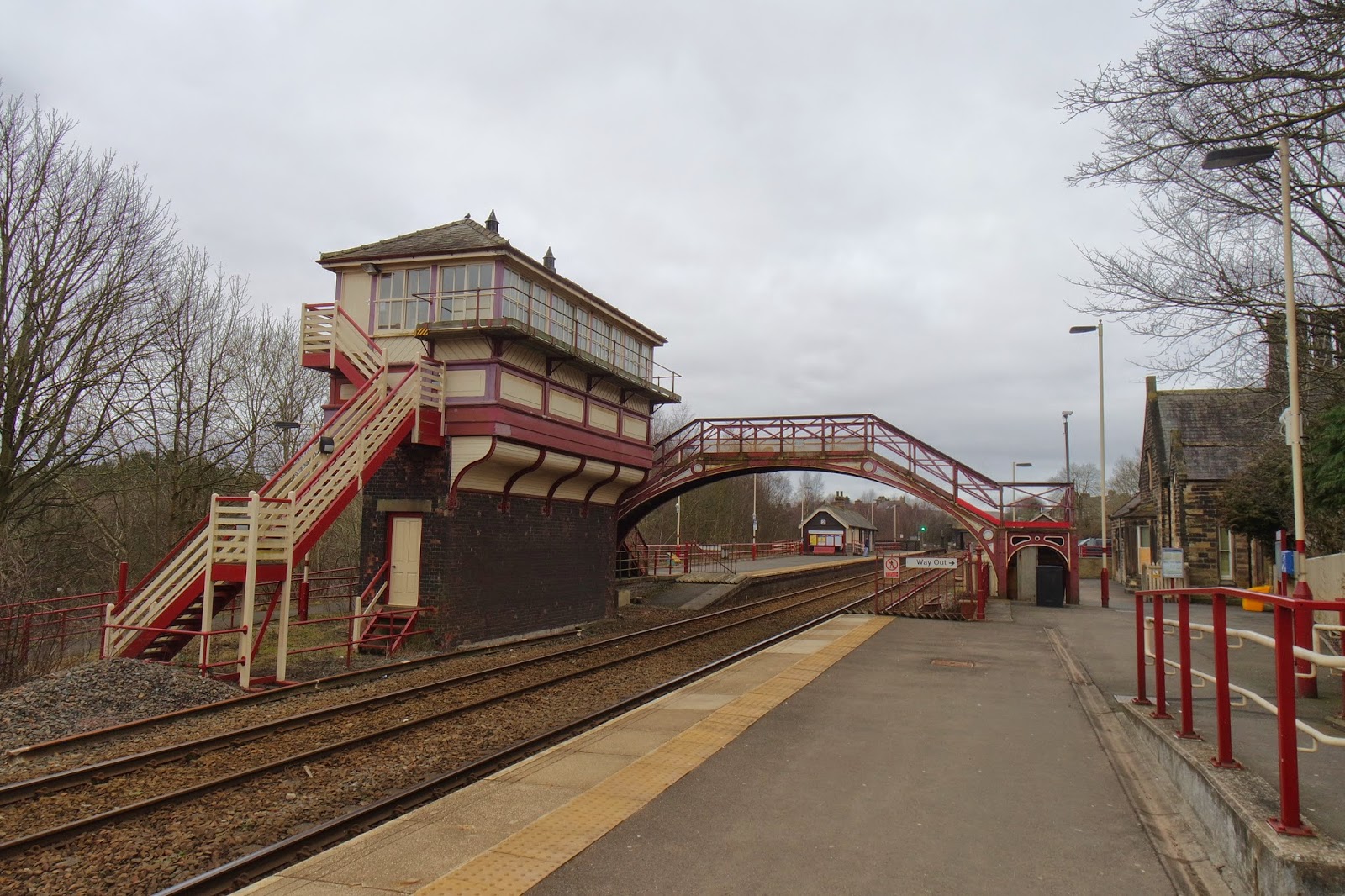 My eye was immediately drawn to the signal box.  Restored a few years ago, I loved the curved wooden supports beneath the cabin.  It gives it a real delicacy you don't often see on something as perfunctory as a signal box. 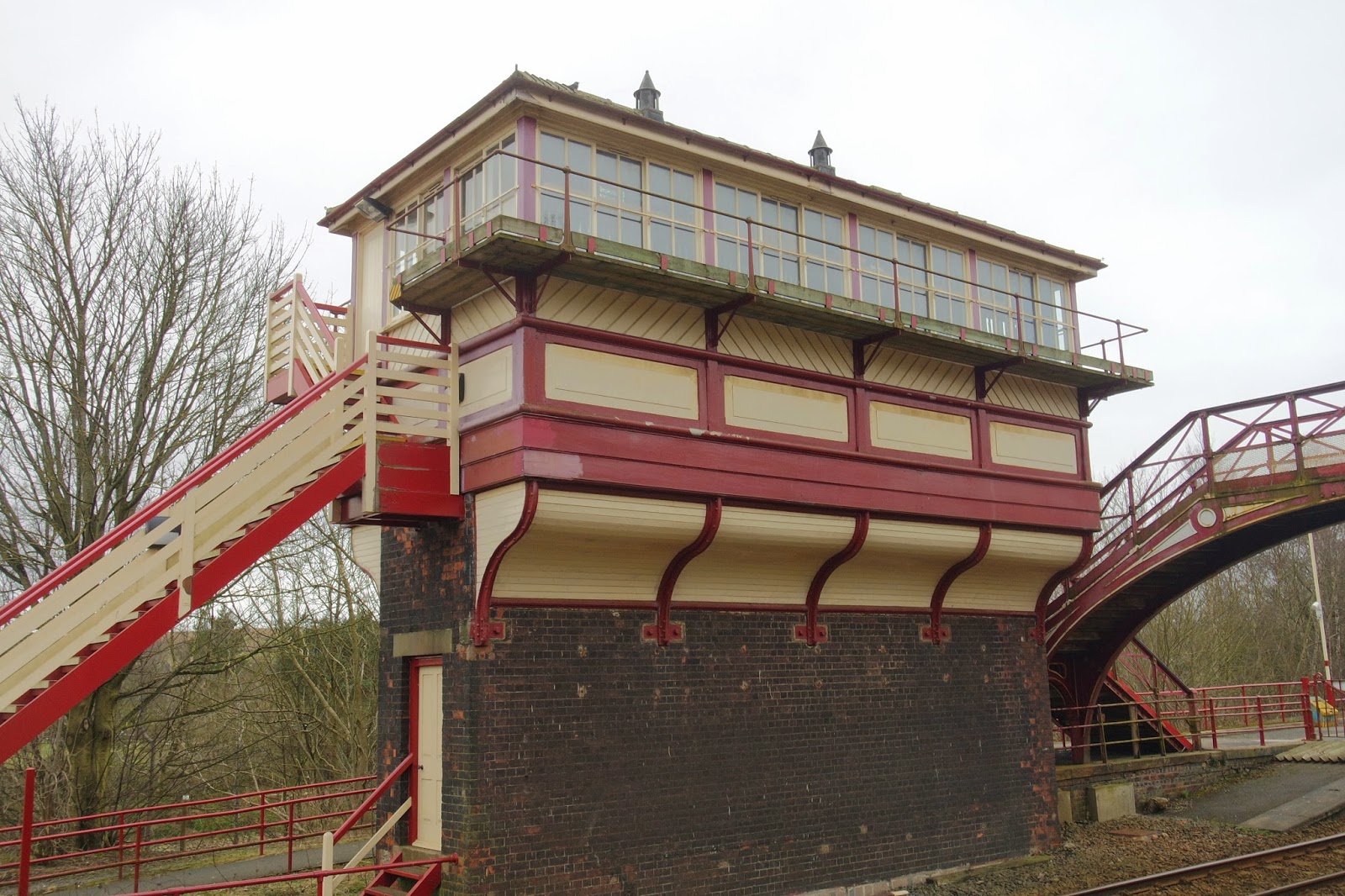 Further on was another pretty relic of the steam era - a water tower for refilling the engines.  It's been restored and stood in a neat little square.  I'm not sure what it's being used for now; I'd like to imagine it's been turned into a tiny cottage.  Compact and bijou, though perhaps a little chilly. 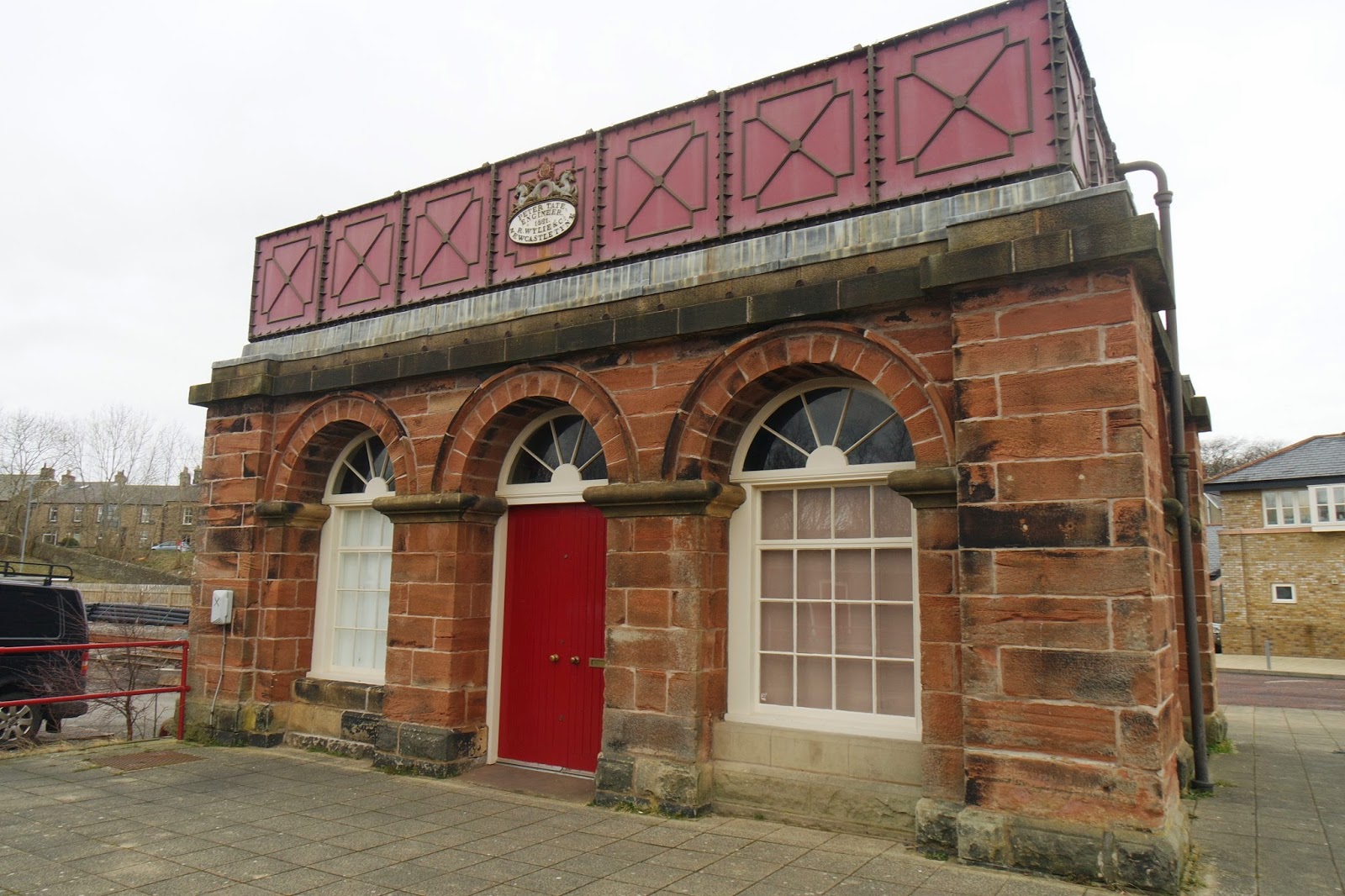 I wasn't actually heading into Haltwhistle.  Instead of heading up the hill I turned right, onto a quiet B road, pausing only for the station sign. 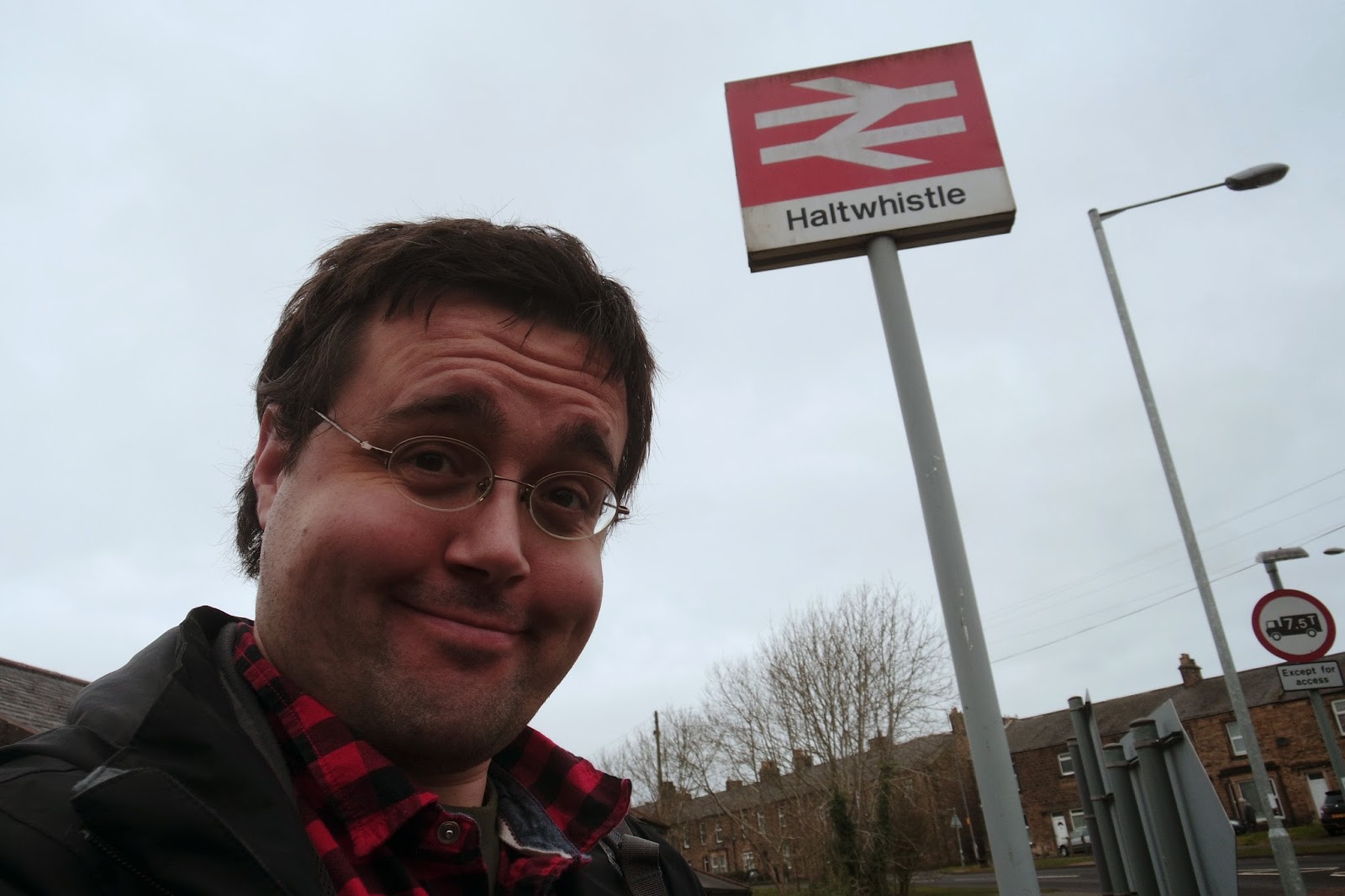 It was a real back way round the town.  It skirted the hill Haltwhistle was built on, leaving me to stare up at the backs of houses.  The railway line cut off access to the river South Tyne.  The only signs of life were the odd industrial unit or petrol station, then a couple of ladies with some excitable spaniels.  I turned off this quiet road onto an even quieter one, passing under the bypass as I did so. 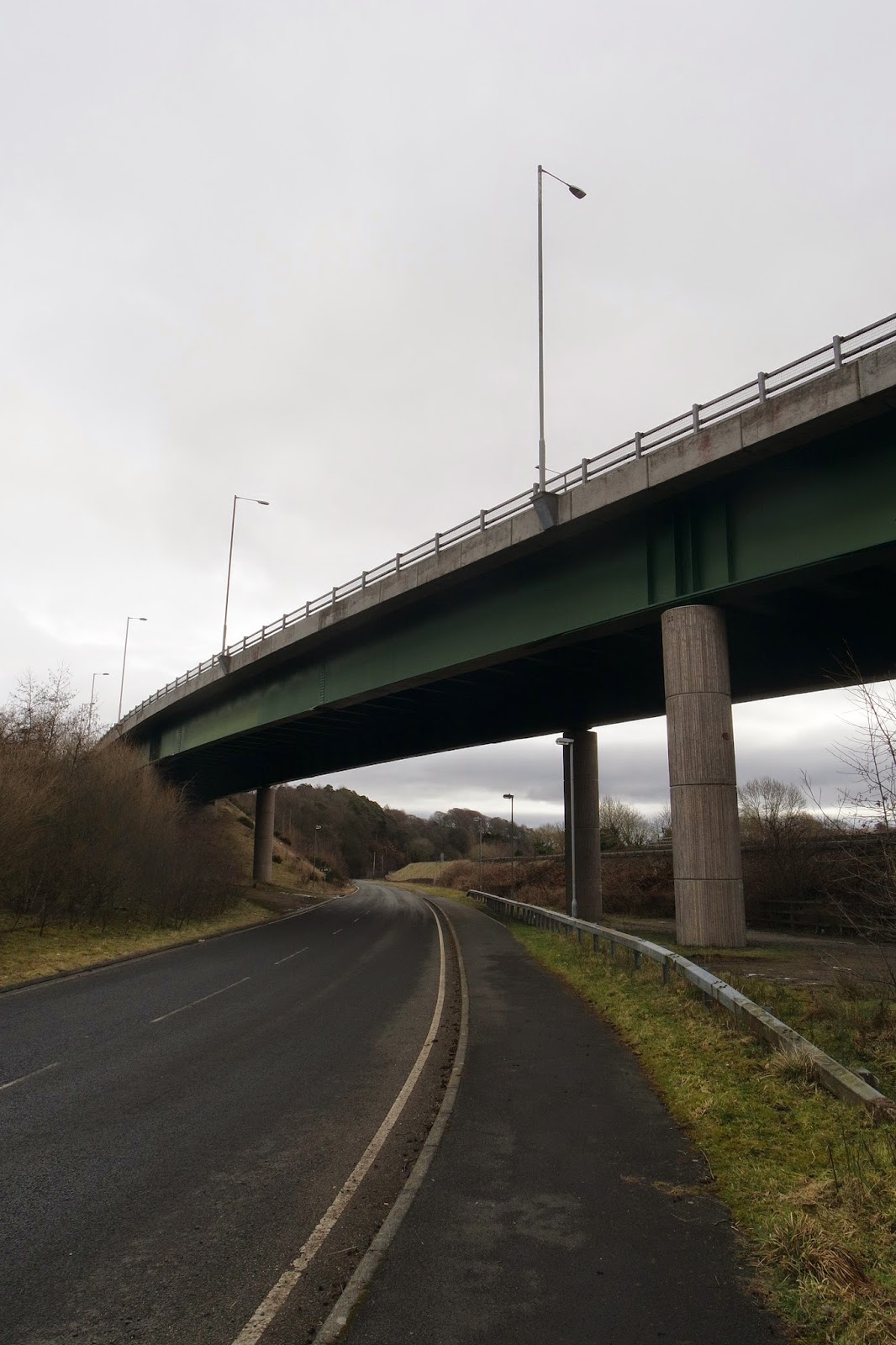 The A69 goes from Carlisle to Newcastle, and over the years it's been quietly upgraded to avoid towns and villages to become a major route.  As I traveled along the Tyne Valley I'd keep encountering the road, sometimes at ground level, sometimes soaring over my head on girders and concrete, sometimes running parallel with the train tracks so that we ended up racing the cars.  Underneath this overpass "Dazza" had scrawled his name in two foot high letters, only for someone else to come along with a tin of red paint and add "is pure scum" underneath.

There was a side road to a caravan park, delightfully situated next to a sewage works, and the railway line above me.  I was walking in the gap between the tracks and the not-too-stable looking cliffs that carried the A69.  I could hear the cars above me, but all I could see was the fragile heaps of rock. 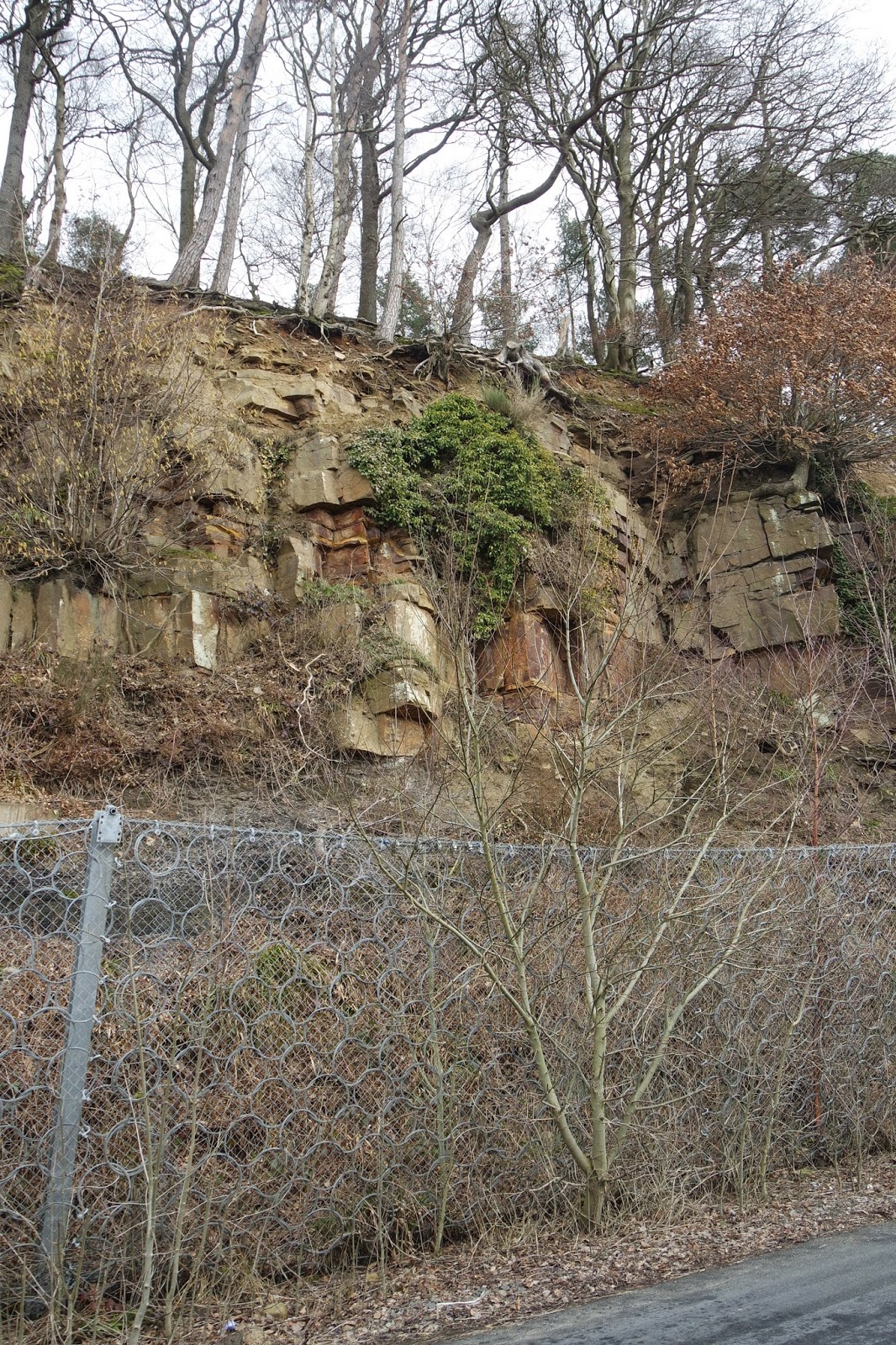 I was chipper, as I always am at the start of a long trip.  This is when collecting stations is at its most fun.  There wasn't a long, three hour trip back across the north to Liverpool ahead of me at the end of the day; I was pushing out into an area I'd never been to before, not knowing what to expect.  As though to remind me that I was in unknown territory, the railway line disappeared into a tunnel. 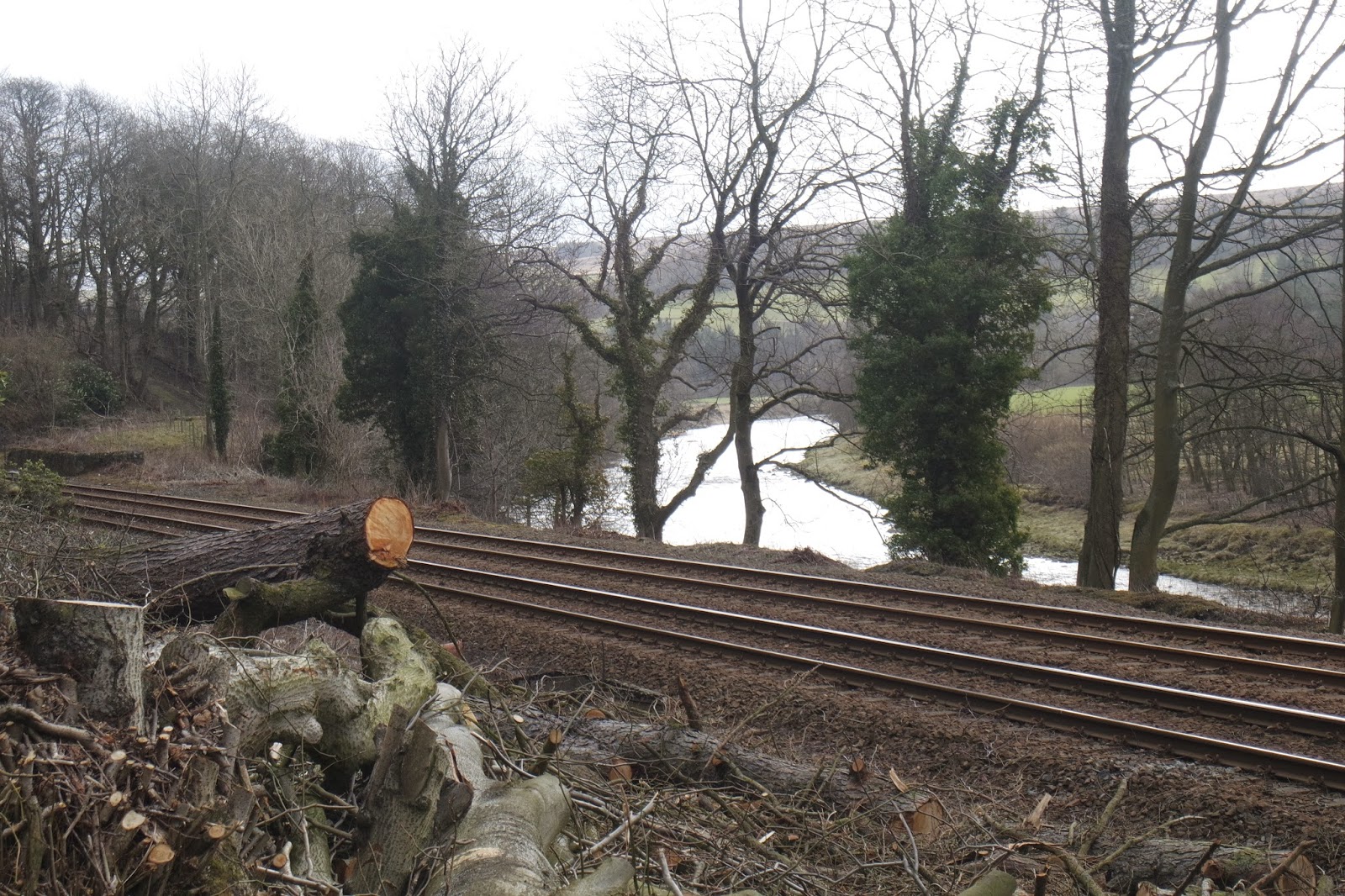 A sign announced Whitchester, but it turned out to be just a hamlet, a couple of cottages huddled round a bend in the road, and I was through and out the other side before I'd even noticed it.  Now there were fields running down to the river.  It was silent.  I didn't see a single car for miles.  There were no other people around. 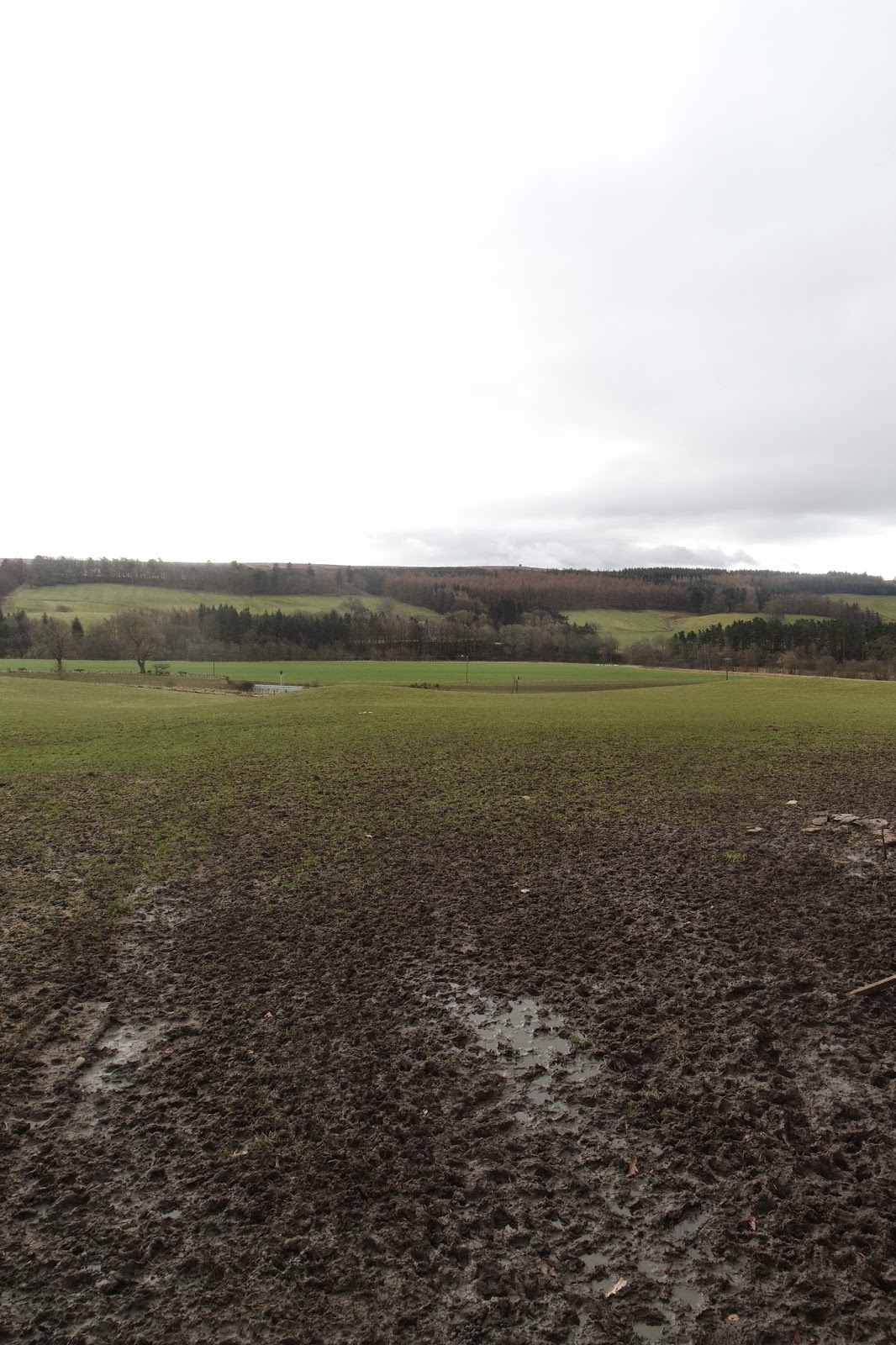 I stopped by a stone wall and drank the last of my mug of tea.  There was an empty box of Tunnocks Tea Cakes on the grass, a reminder that I was incredibly close to Scotland.  The shame of this walk was that I'd never actually get close enough to Hadrian's Wall to see it.  The Wall was always three or four miles out of my way.  There is a suggestion that the station at Gilsland, closed in the 1960s, should be reopened, as it is right next to the Wall.  The problem is that the only people who would use it would be tourists - there's not much of a community around the station spot who'd use it outside of the season. 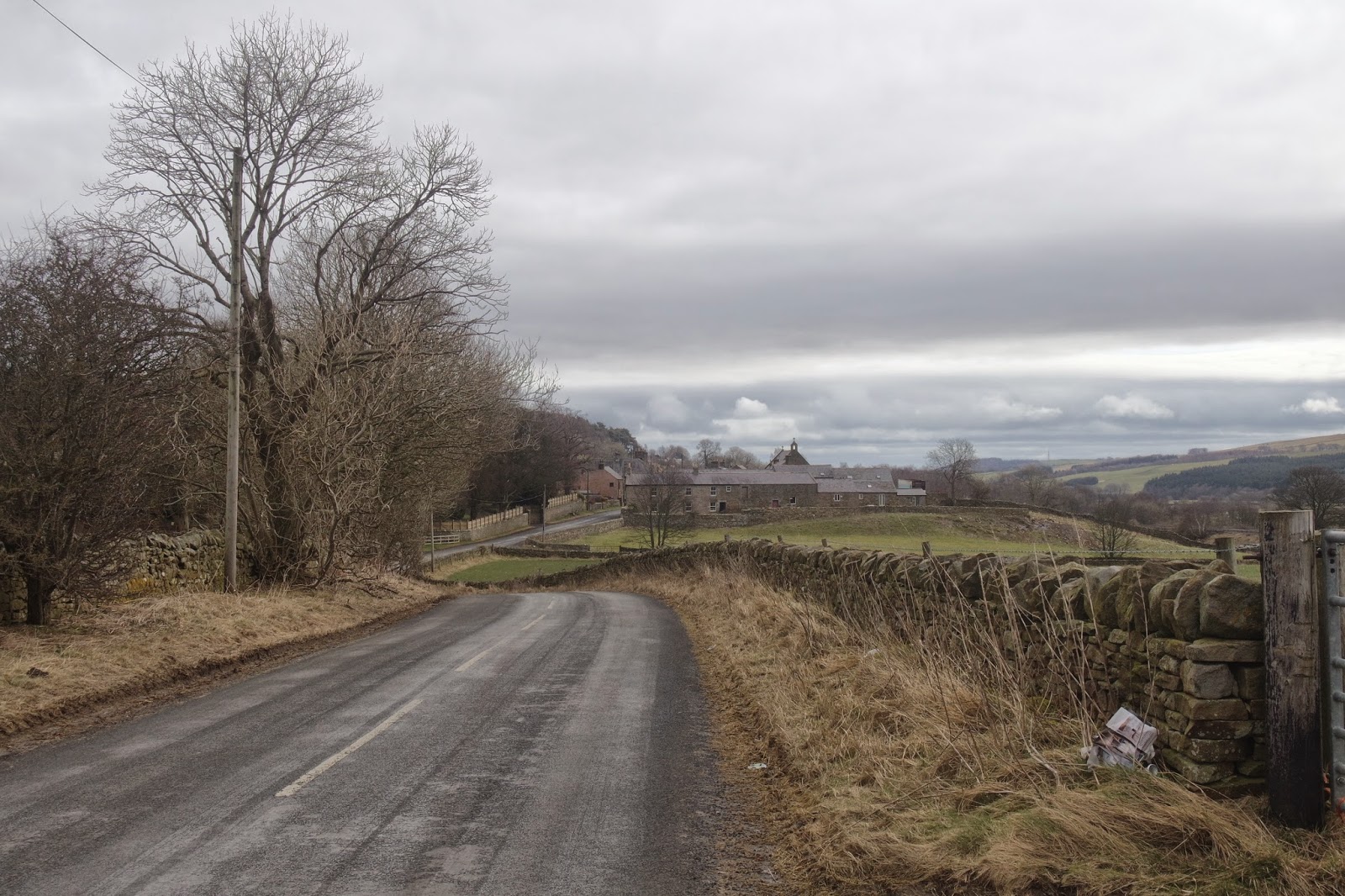 The village of Melkridge could have appeared in a Ladybird book about villages of England, it was so typical.  Stone houses were grouped around a village green, at the centre of which was a flagpole.  There were a couple of churches too, but, this being 2015, they'd been converted into homes. 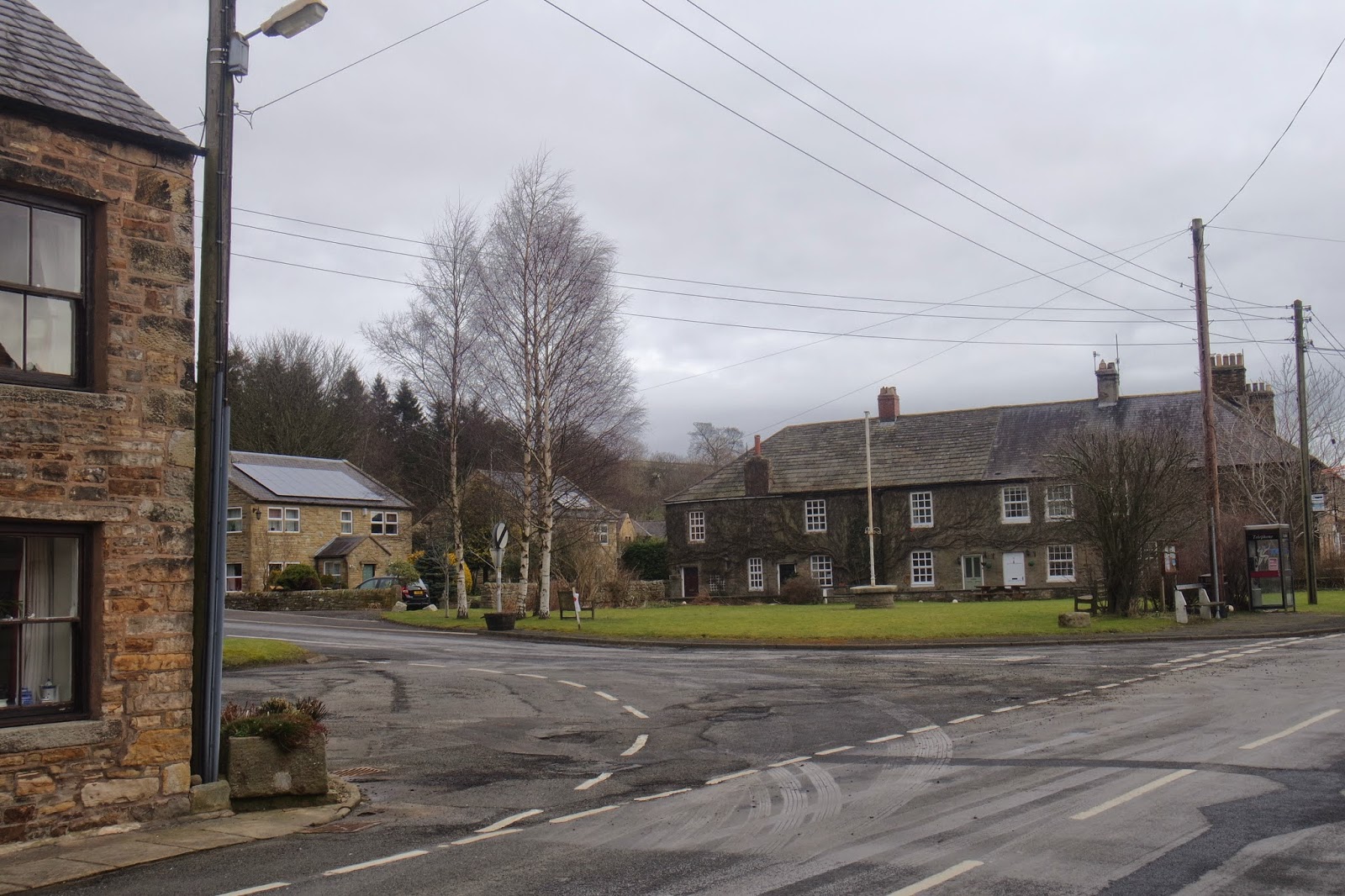 I had a good old nose at the notice board while a bus headed for Hexham passed by.  There was a letter from a solicitor advising the village that the owners of Melkridge Hall had withdrawn permission for people to cut through their land, the miserable old sods.  I instantly pictured a Mr Burns-like figure, peeking out of an upstairs window and reacting with horror to laughing families heading down to the river.

There were some less picturesque cottages further on, strung along the side of the road, and a field with a single forlorn looking Shetland pony in it.  After that I was back in open countryside.  The road slowly rose upwards, clambering up the side of the hill in a series of elegant meanders. 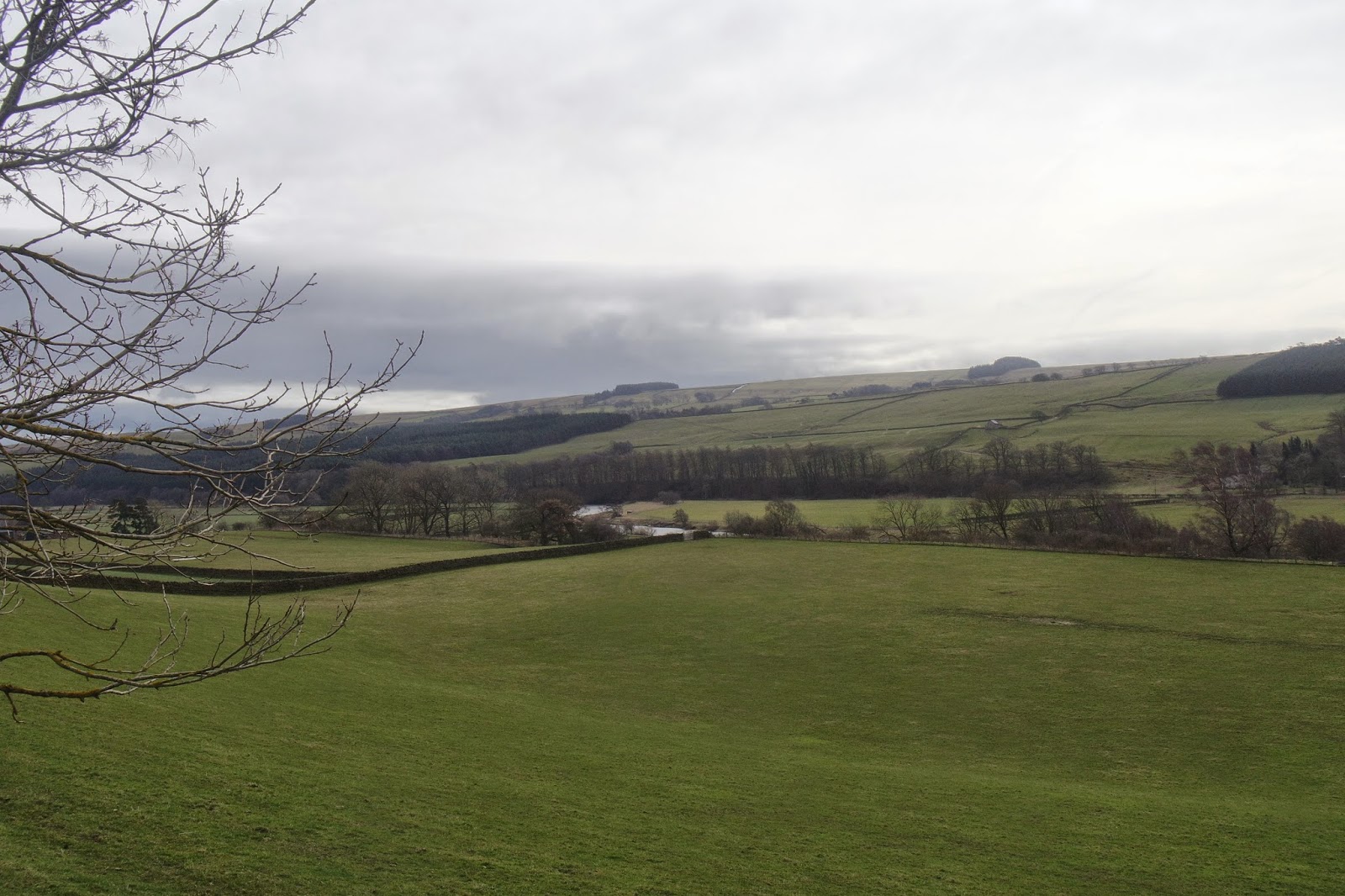 The altitude, plus the long sweep of empty land, meant that the wind picked up suddenly.  I was suddenly being carried along on it.  It actually did me a favour.  I'd been walking for over an hour by then, and the rising slopes could have been dispiriting.  The wind at my back acted as a gentle, but insistent hand, pushing me up and onwards. 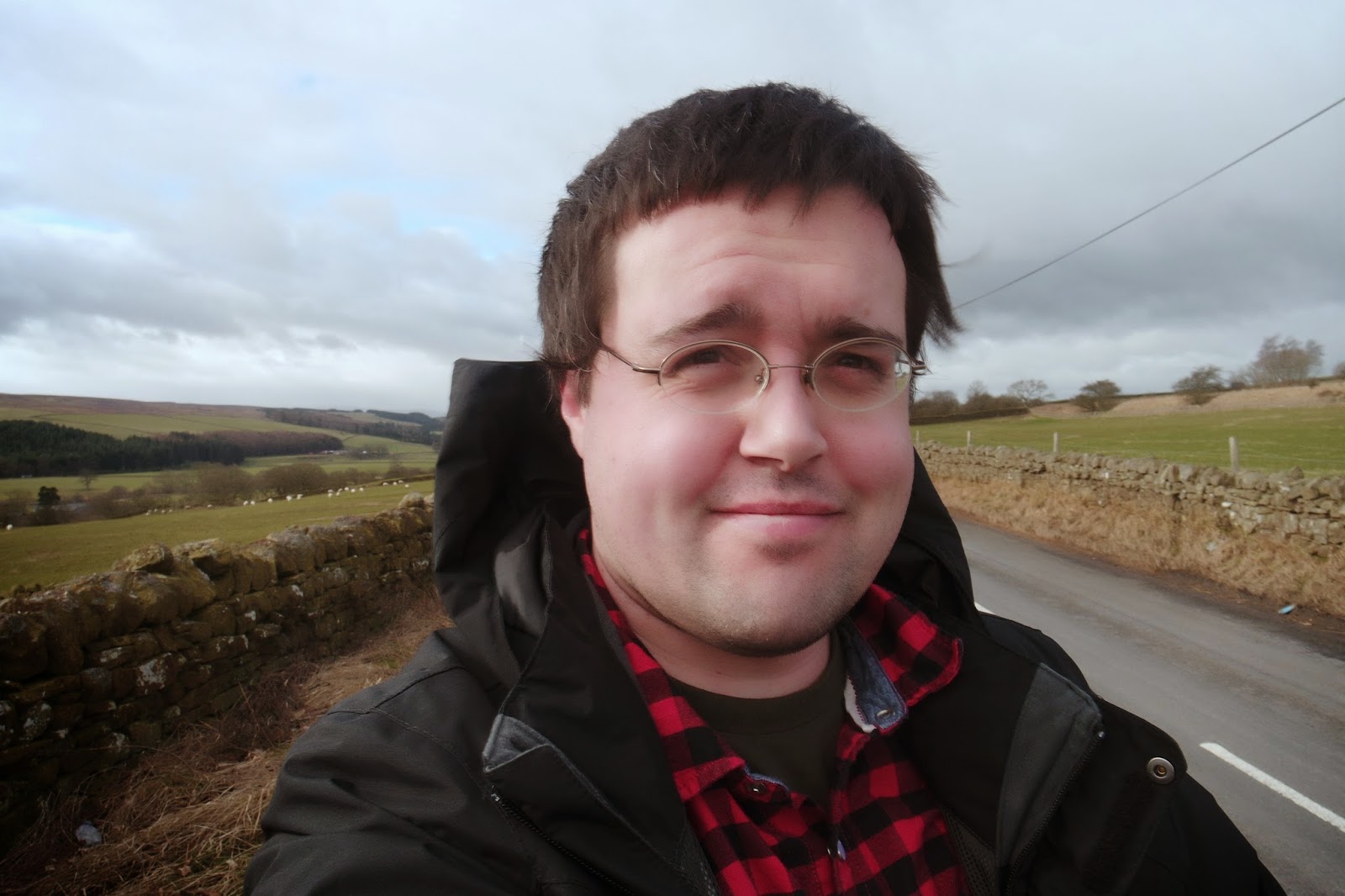 It wasn't doing much for my hair, though.  And when I nipped behind a wall for a pee, the wind scattered it across a wide area, like a sprinkler.

I was walking on the road, because pavements were of course surplus to requirements here.  I'd occasionally jump onto the verge to avoid a big Range Rover or a fast BMW, at one point inadvertently crushing some snowdrops as I did so.  I felt guilty about that all day.

My first glimpse of Henshaw was a sole farmhouse, with a broken down stone wall on the opposite side of the road.  An elderly man in overalls was hefting the stones back into place, a wheelbarrow of cement beside him.  He stopped to watch me approach and grinned.  "Bet you're glad you're coming this way and not walking int' wind!" 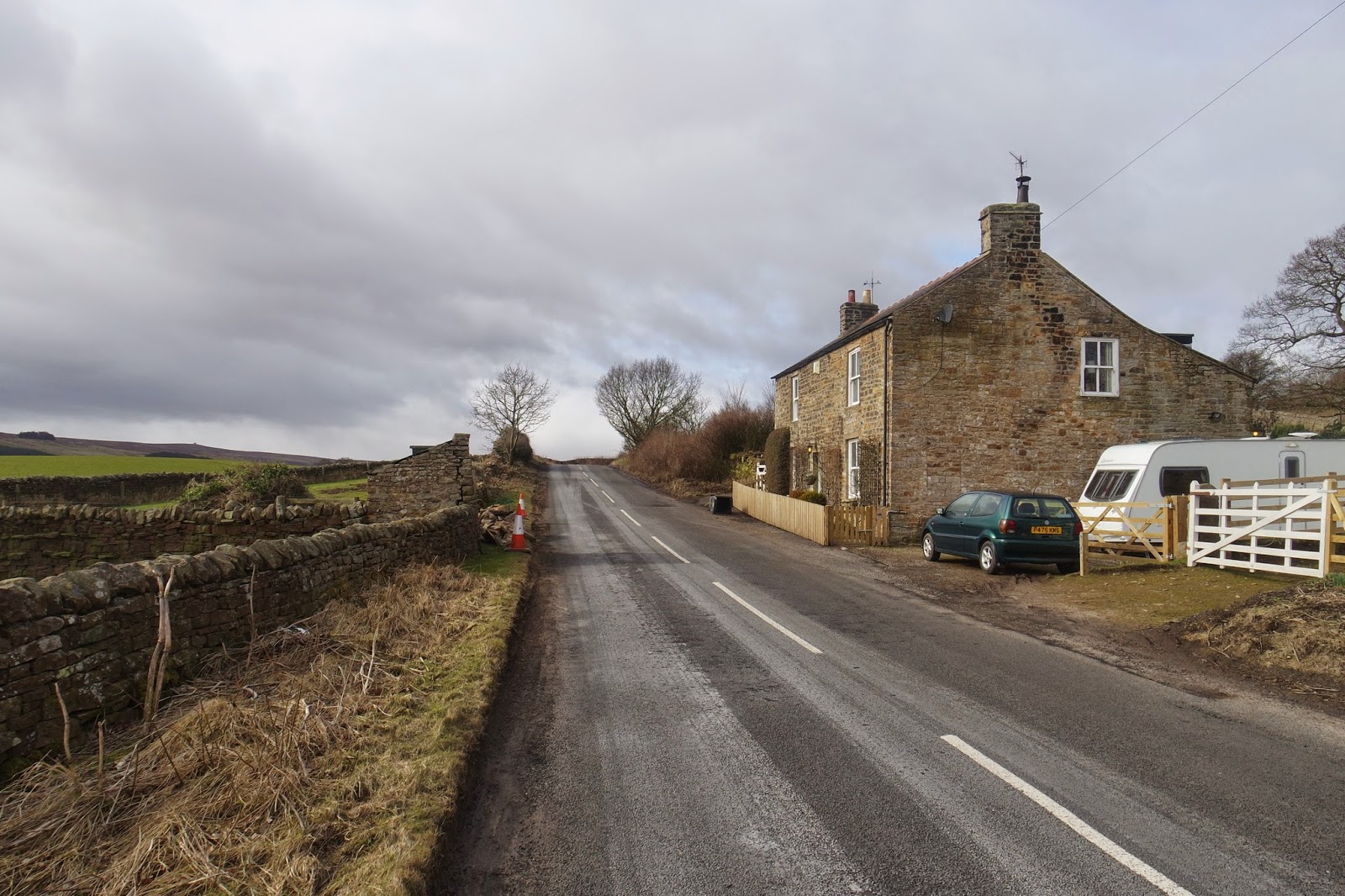 There were a few more houses, including one that had a stack of gas cylinders propped up in the yard, right next to the road.  My imagination immediately ran to a bus full of nuns careening off the tarmac, smashing into them and causing a devastating explosion; I find it very hard to see gas cylinders without imagining they're ready to combust at any second.

Henshaw was dull.  New houses had been built in every gap, and they were closed off to the road, with gates and hedges for privacy.  I didn't see anyone walking in the village, just a few cars poking around.  There was a printout on a telegraph pole, letting us know that the next showing of the film club would be ET - "adults £3, children £1".  Surely everyone who wants to see ET has seen it by now?  It's thirty years old.  It's on telly every Christmas.  It's certainly not interesting enough to pay three quid to see.  Even in the old days of Blockbuster Video I'd have balked at paying that much to rent an old film. 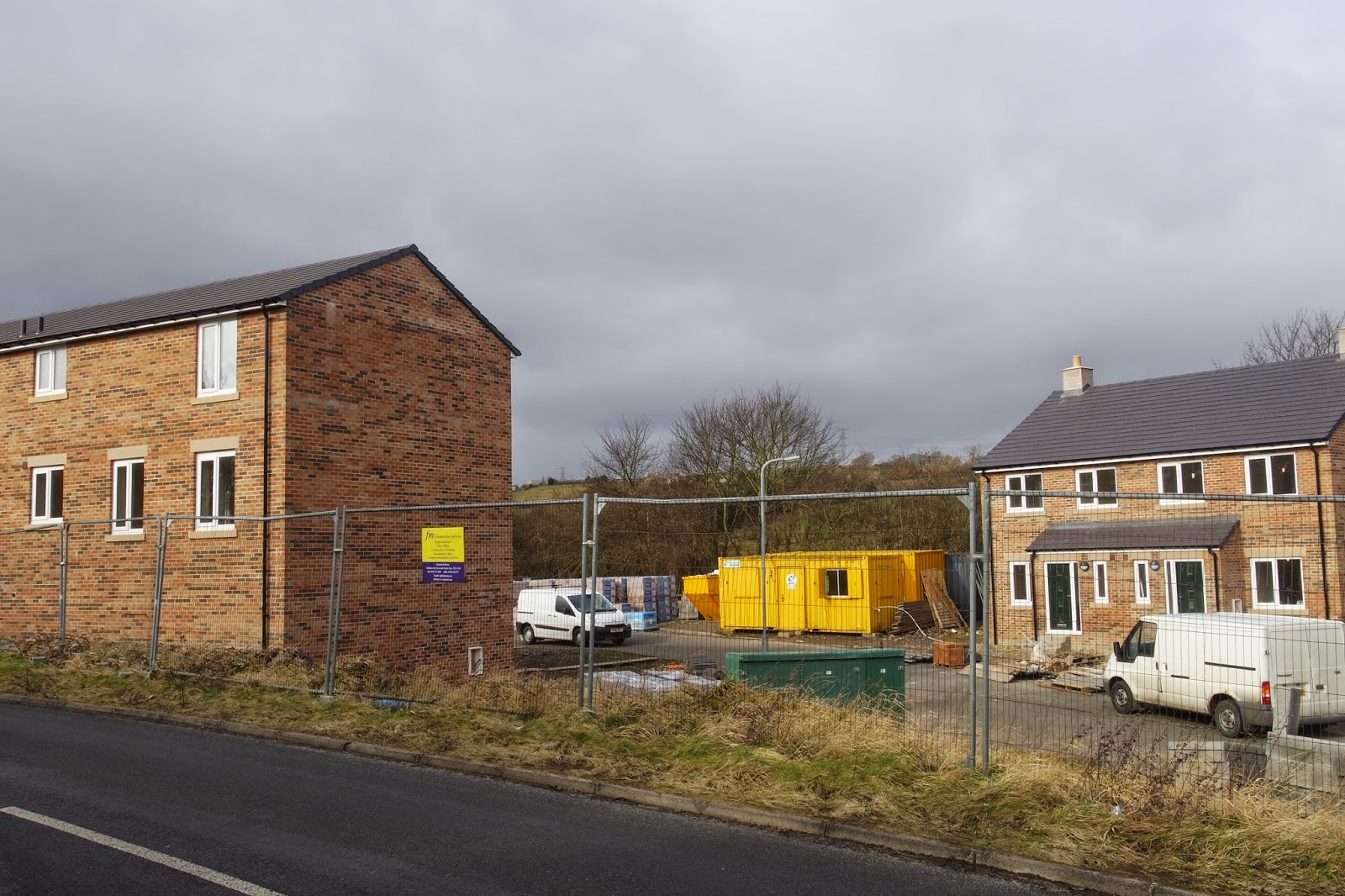 It did have one interesting feature though.  A billboard with a giant red thermometer announced "We've done it!  Construction on the new village hall expected to begin in 2012".  I followed the side road down past a playground to the hall. 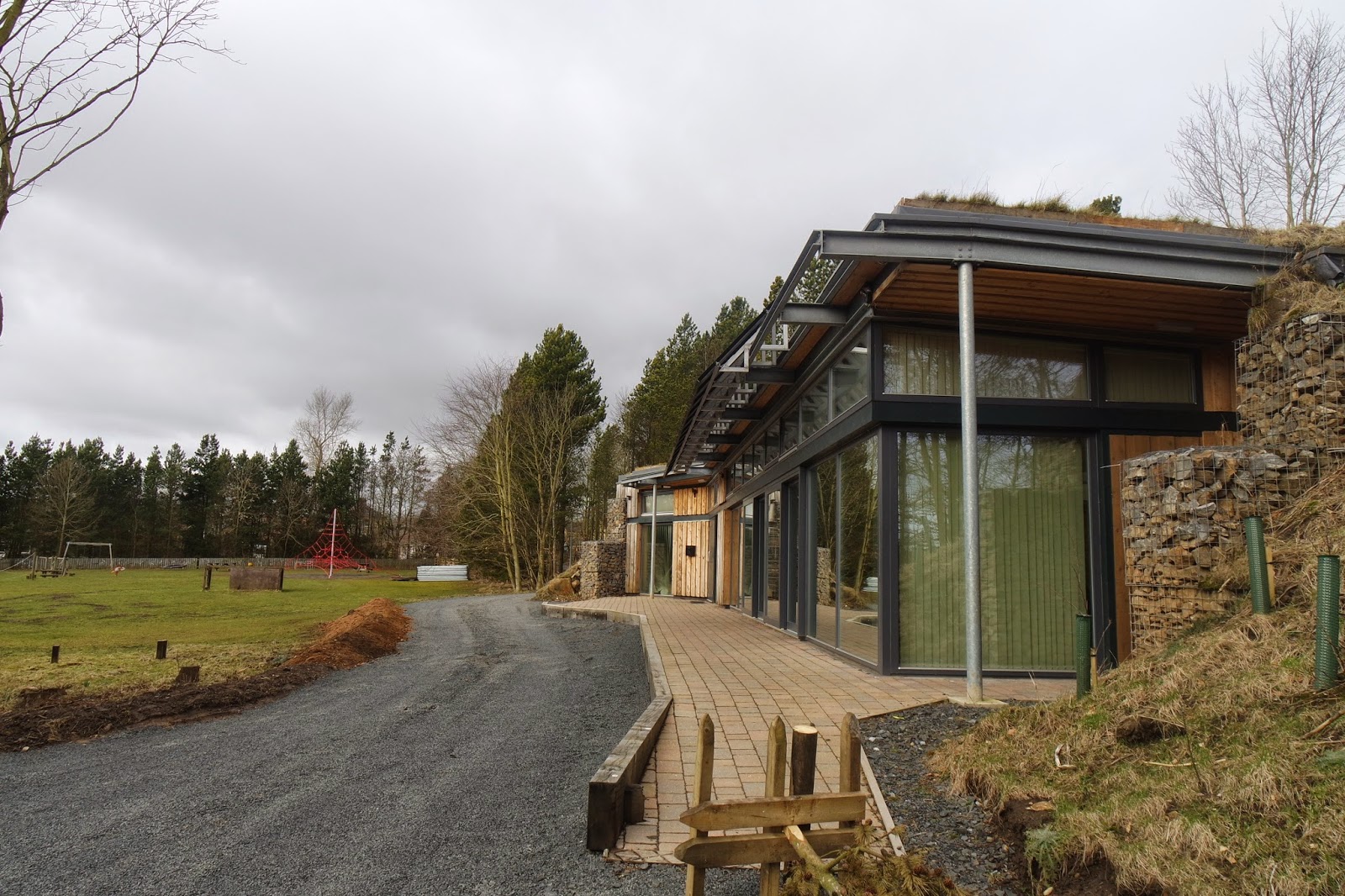 There was plenty of glass and wood, while the roof was covered with grass.  It gave it the look of a Hobbit home, thrusting out of the rockface.  I thought it was wonderful.  I'd have taken more pictures, except there was a yoga class going on in the open fronted hall, and I didn't want them to think I was a pervert with a fetish for middle aged ladies in spandex. 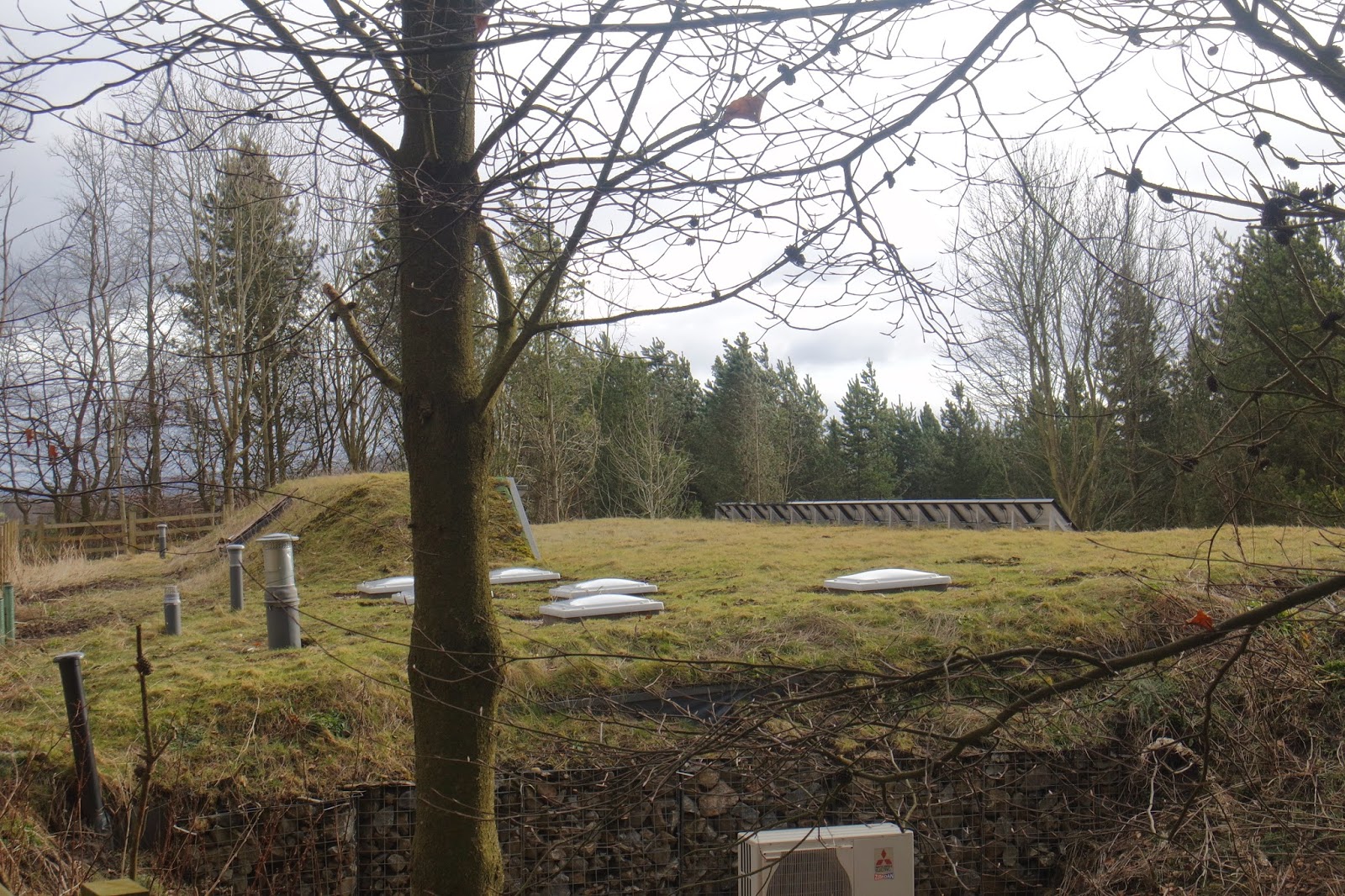 Henshaw turned into Bardon Mill.  The mill in question was actually a pottery, with a yard full of giant glazed urns.  It was grinding and throbbing as I passed, smoke rising up out of its chimneys. 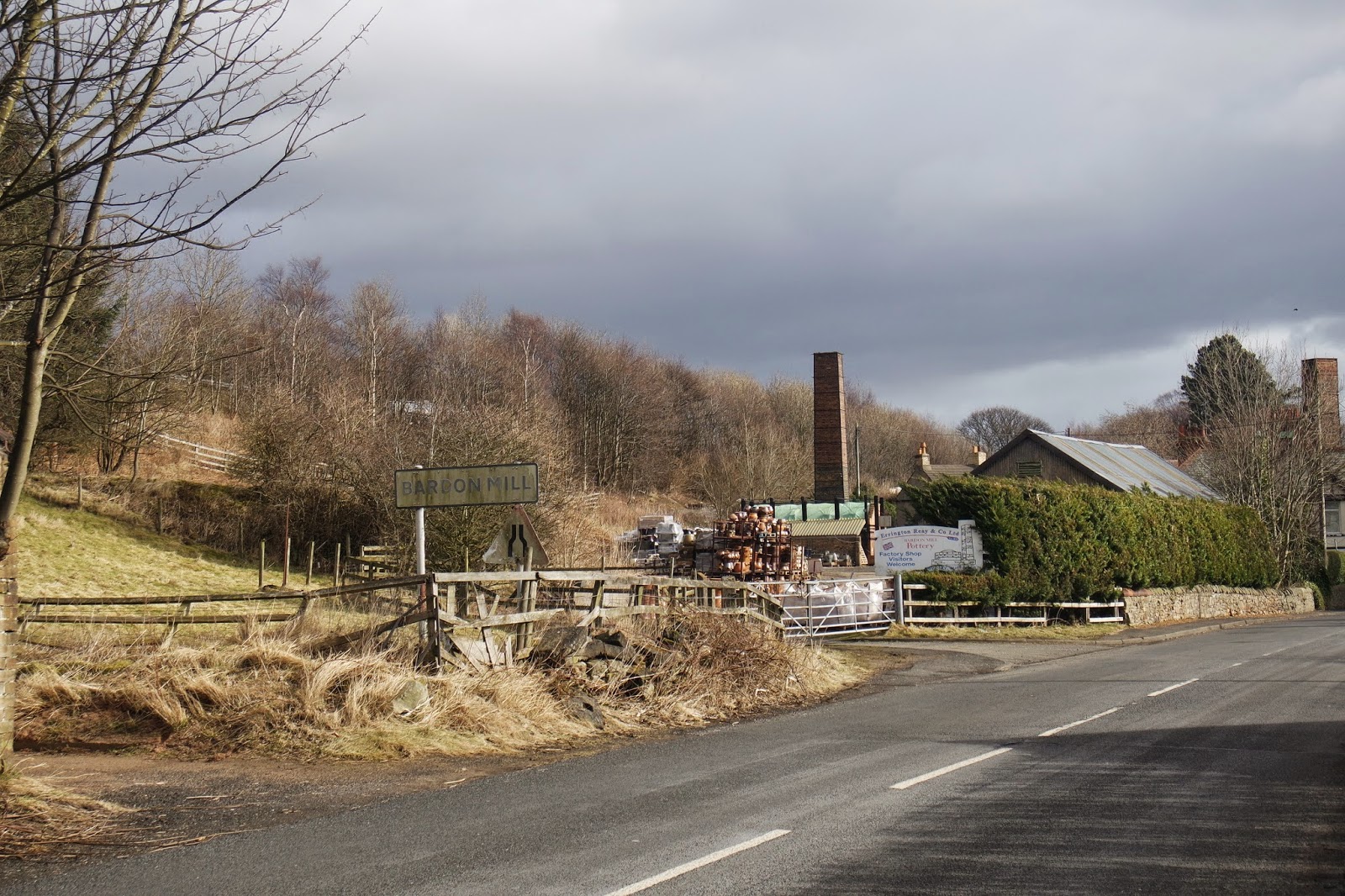 I had a little bit of time before my train so I went into the village store for a cup of tea.  There were a couple of old ladies, and some hikers, and I took up a corner table with my china pot.  A woman came in for her coffee and buns, and it became clear how central to the village the pottery was.  She talked with the old ladies and the shopkeeper about the staff, all first names only.  It seemed she wanted the men of the pottery to do a naked calendar - "ah reckun that'd be hysterical!"  The ladies joined in enthusiastically, and they ran through the men of the factory, rating whether they wanted to see them in the nip.  Then the man behind the counter added that the women should do it too, and the way he said "topless!" was a little too enthusiastic.  It was an unwanted element of real sex in their cheeky chat, and it clanged into the conversation. 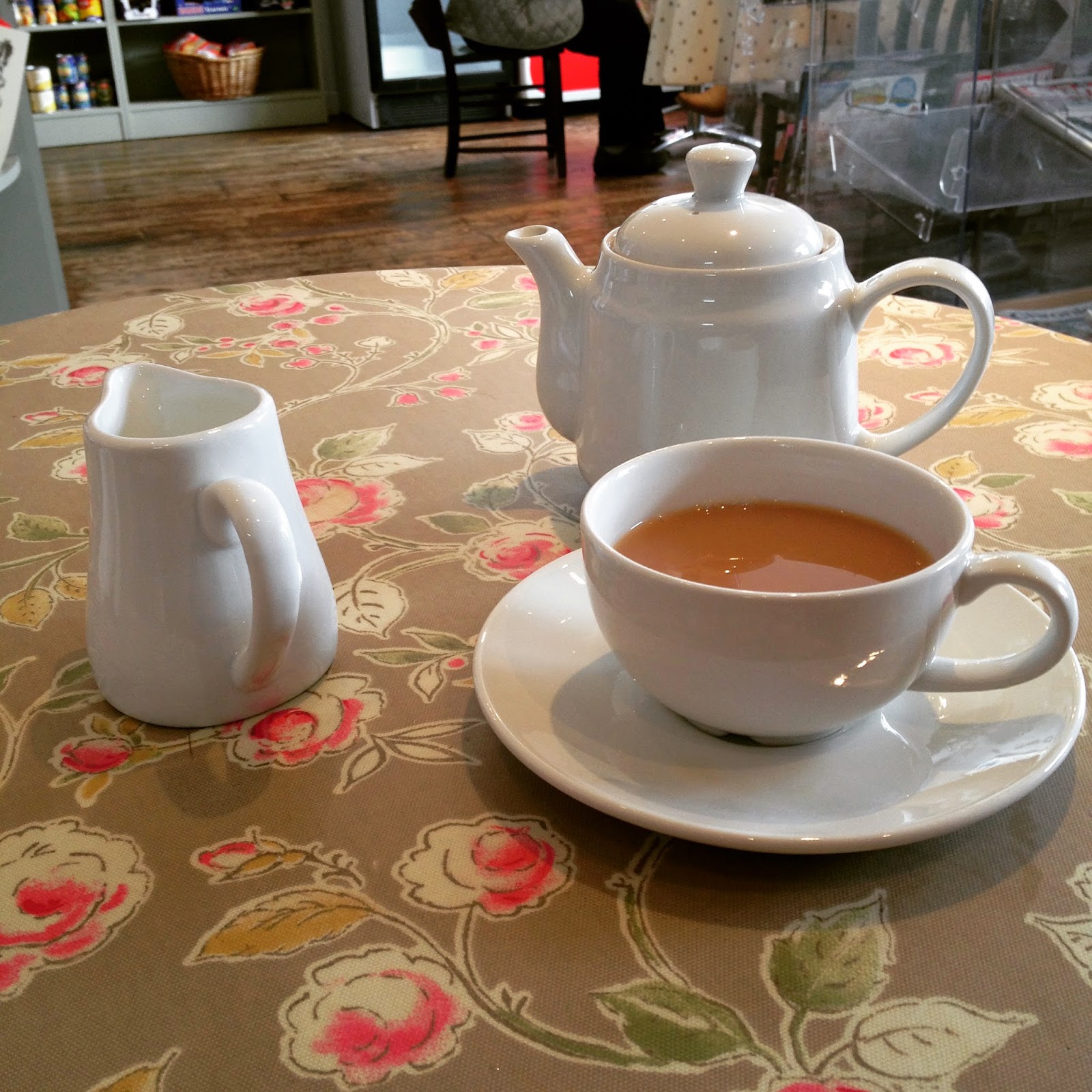 I headed down a tiny side road to the station.  There was a tree outside with a bench wrapped around it; names had been carved into the back - L Slater; S & J Gibbon.  I assumed they were beneficiaries and not extremely polite teens who'd got bored with a pen knife. 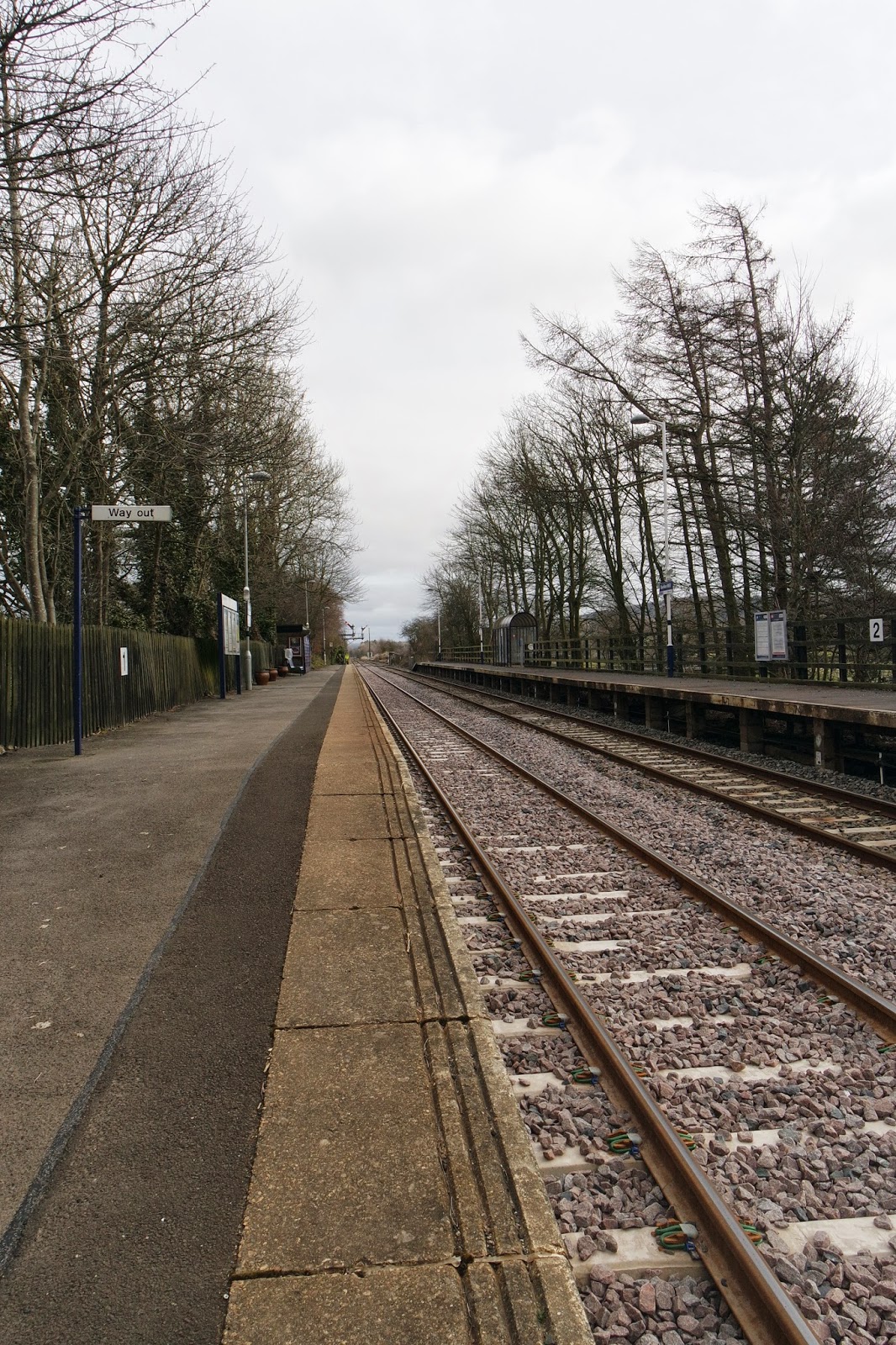 The platform had been pepped up with a few urns from the pottery, though it was too early in the season for there to be plants in them.  A few sad twigs poked their way out of the mud.  There was another ALF, but disappointingly, it was for the exact same local feature as at Haltwhistle. 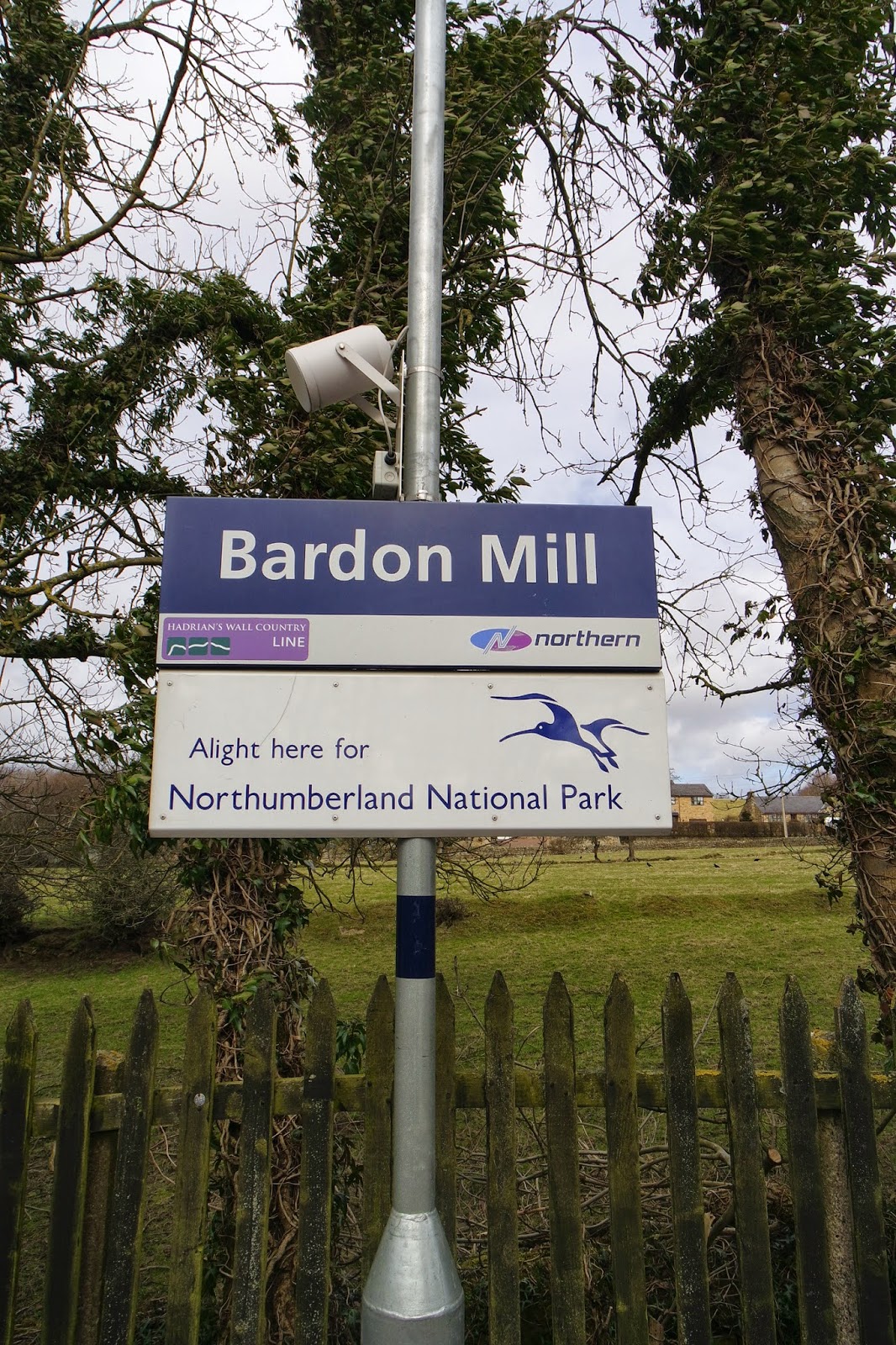 That was the last of my walking.  My last two stations were so distant from one another, walking between them would have taken the rest of the day.  I sat on the platform and stretched out, anticipating a fairly lazy afternoon. 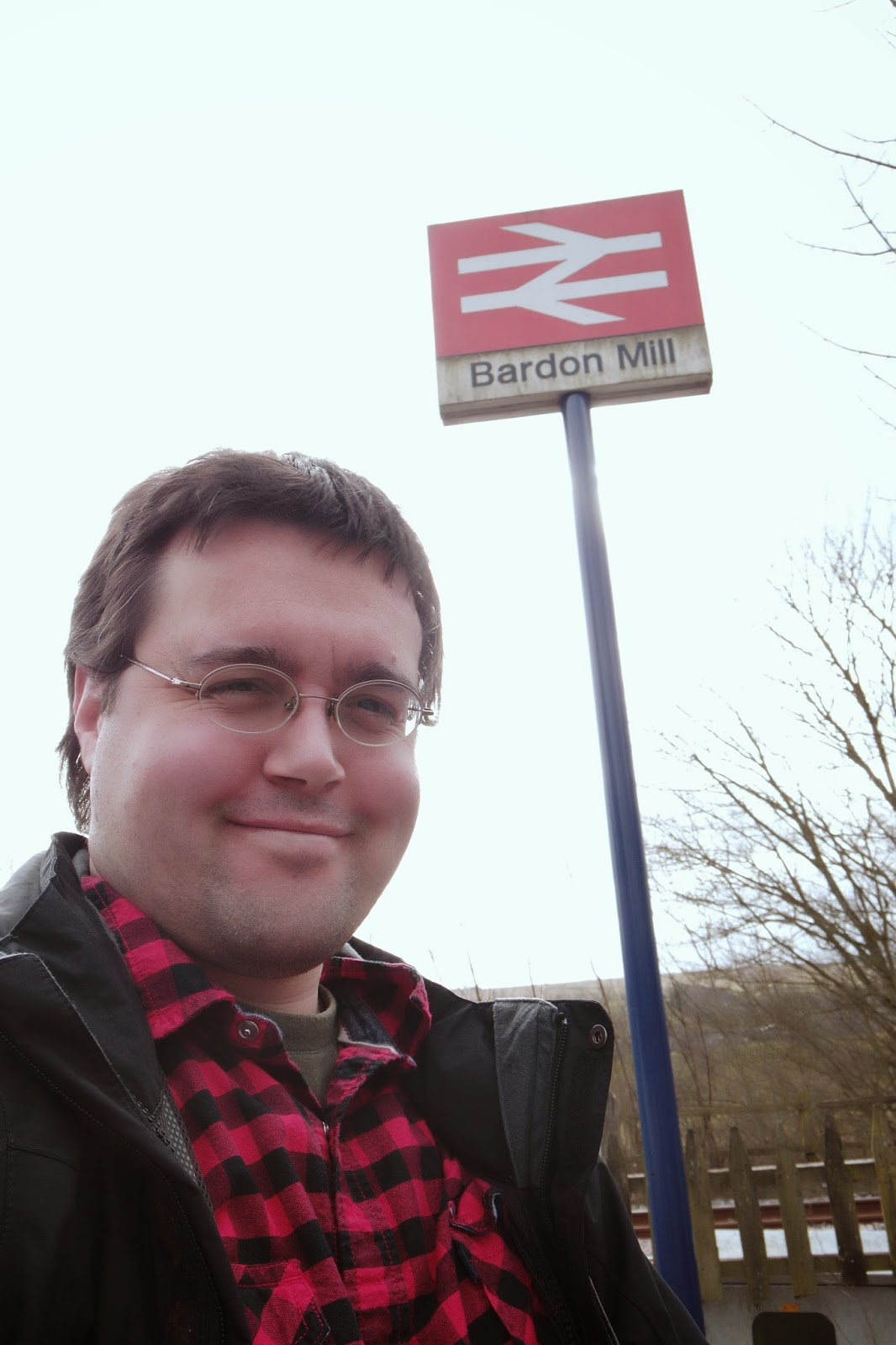 Haltwhistle is the best name for a railway station ever.

Hello, just thought I would let you know that you didn't walk through Henshaw. You walked past our house called The Bents where the old guy was re-building our field wall. We are in the Parish of Henshaw but you were actually walking through Tow House, Redburn -where the new houses were being built and then into Bardon Mill where our village shop and cafe are opposite the pub The Bowes Hotel. Henshaw is on the north side of the A69 and is a very pretty little hamlet-we lived there for 13 years until last year when we moved to The Bents. You should come back this way in the Summer and catch the bus up to Hadrian's Wall next time!
Best wishes!

Aha! Thank you for the local info. I am jealous of your home out on the hills. I tend to rely on the names on maps when I go to places and sometimes they can be a bit vague. Plus I wrote this up a couple of weeks after the event so I probably just forgot...