Out of the Toilet 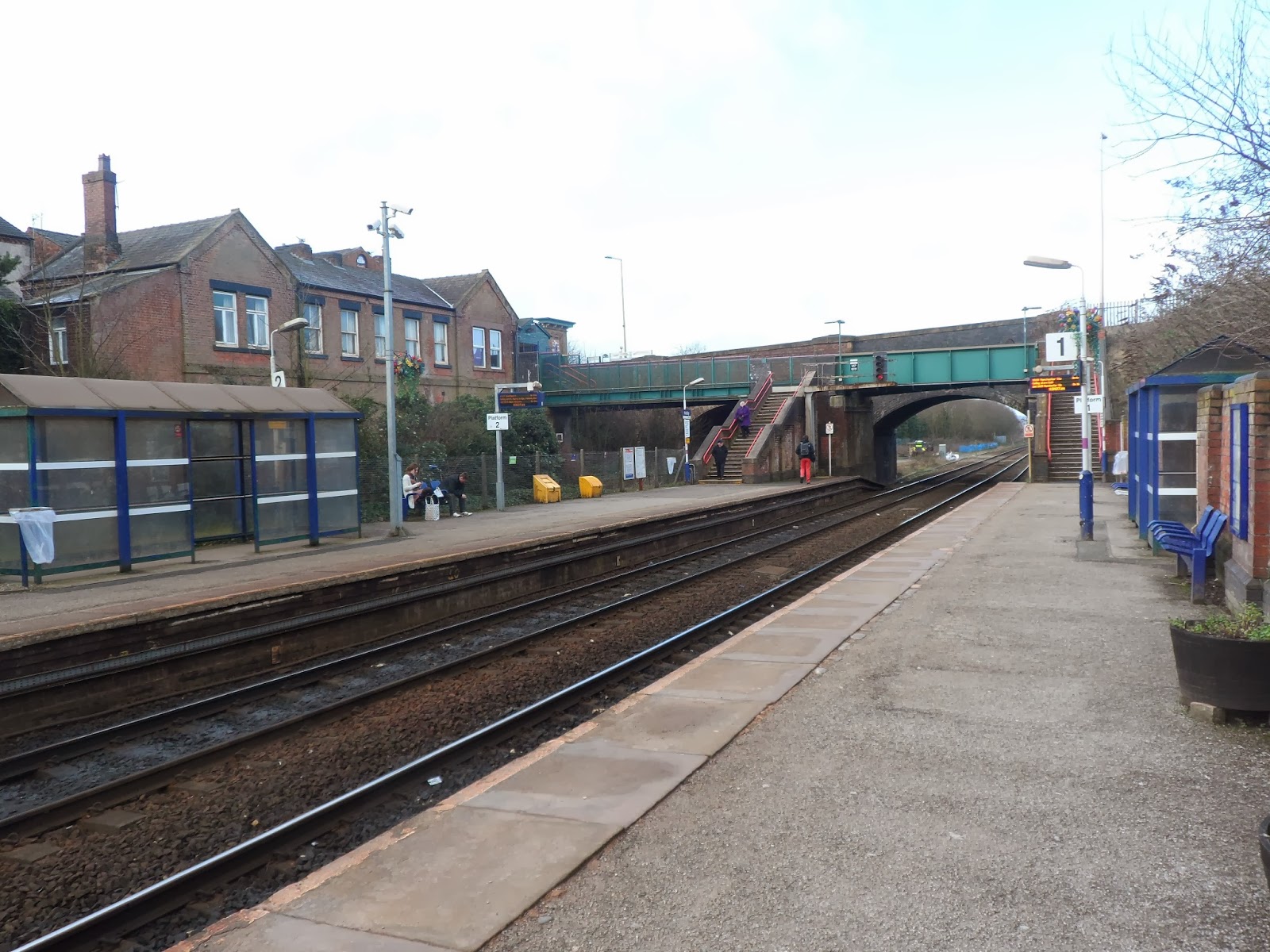 It's nice to have your expectations for a station confounded.  After the miserable strip of concrete that was Ince, I thought the rest of the line would be equally grim.  Hindley especially, because no matter how hard they try, the first thing you think of is - you know - Myra.  Sorry Hindley.  It's not your fault. 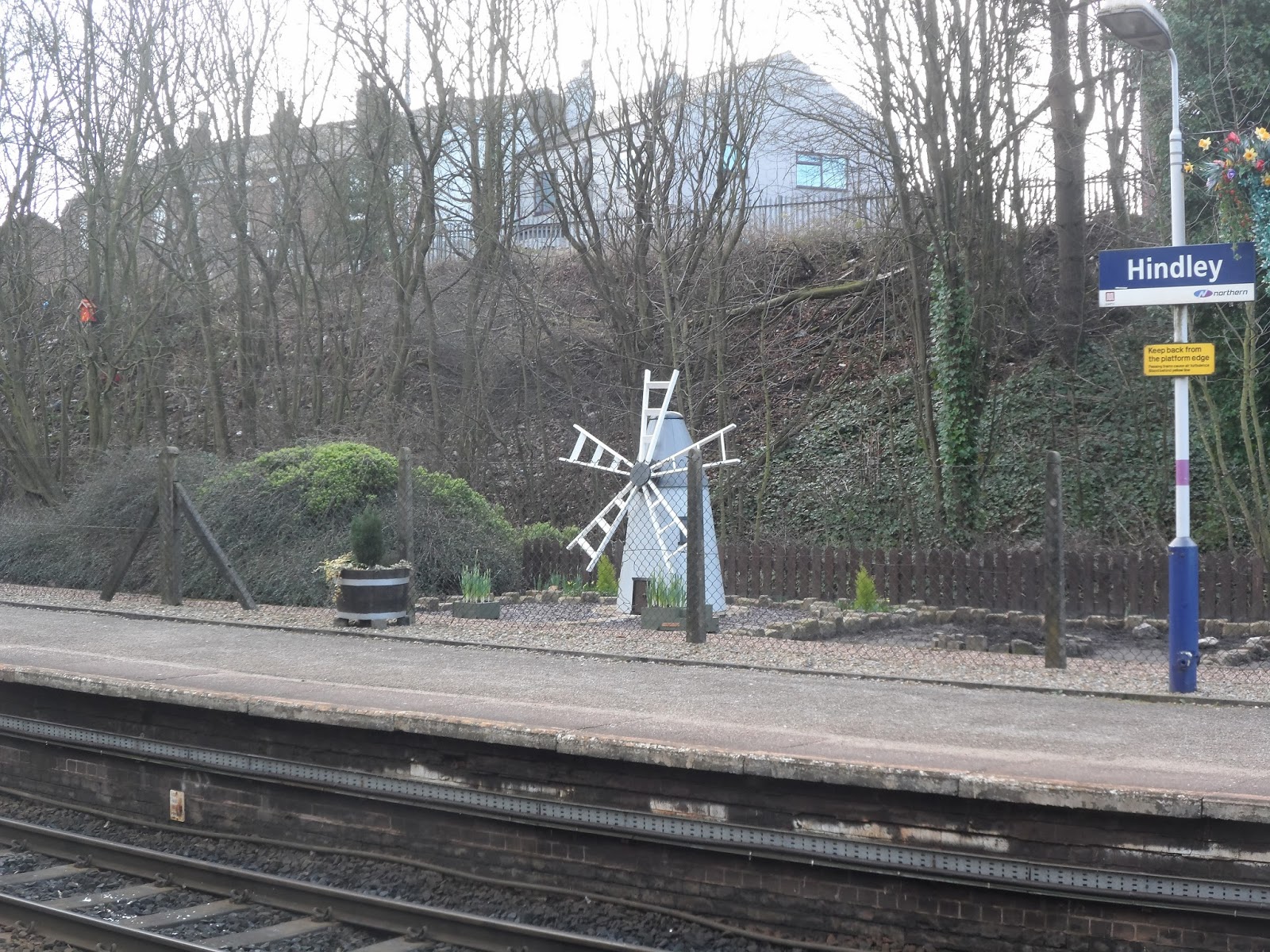 The abandoned platforms 3 and 4, which once carried a fast line from Manchester to Wigan, have been turned into a garden by the Friends of Hindley Station.  It's attracted a good deal of attention, even in the national press, and it was a shame I was seeing it in February instead of in its pomp.  I headed up to the overbridge and found, much to my delight, a station building.  With a ticket office too. 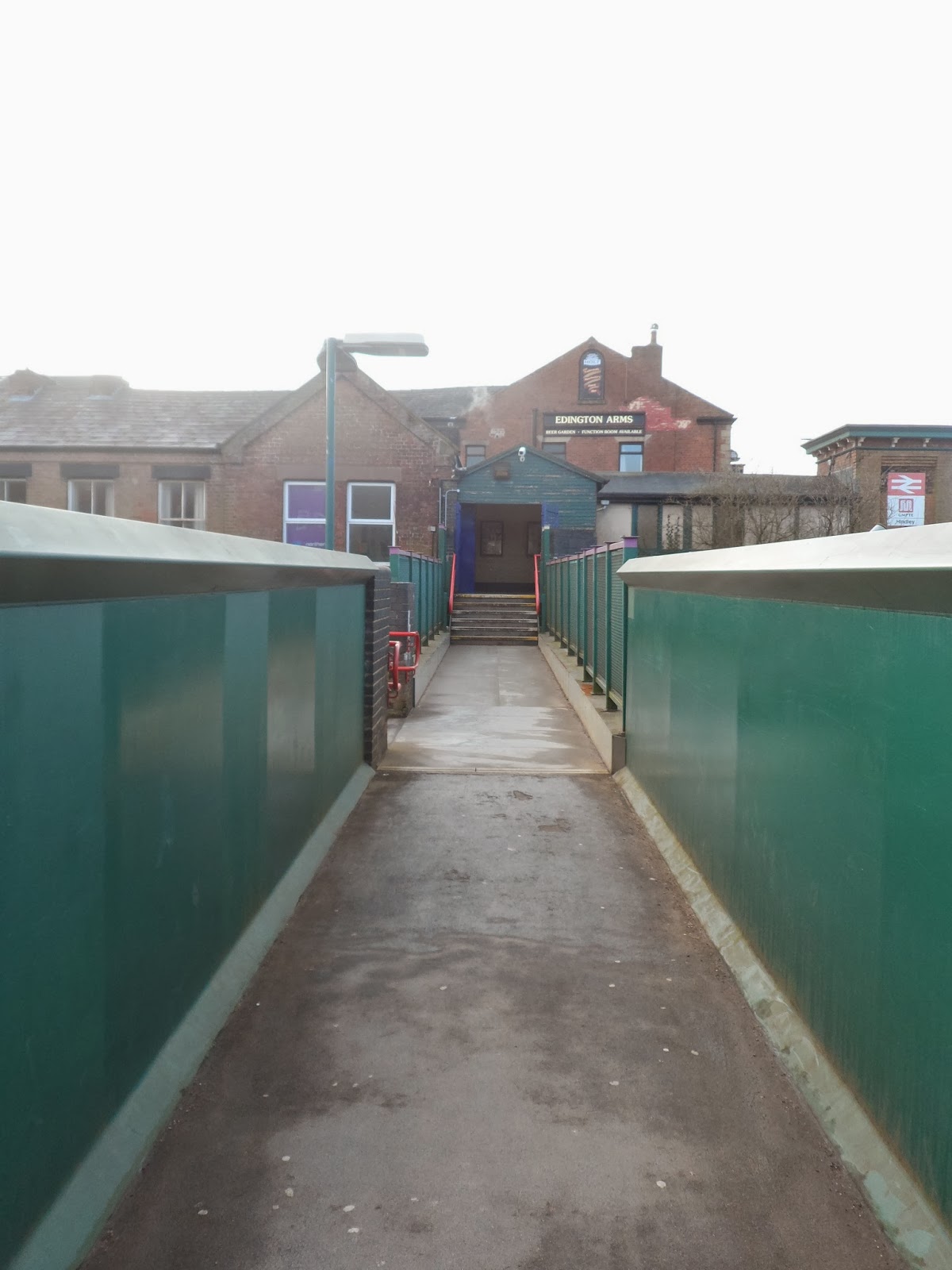 Admittedly, the ticket hall is just the remnant of a much larger station building, but it's pleasing to see.  Inside there's a warm, cosy feel, and it deposits you neatly onto the main road. 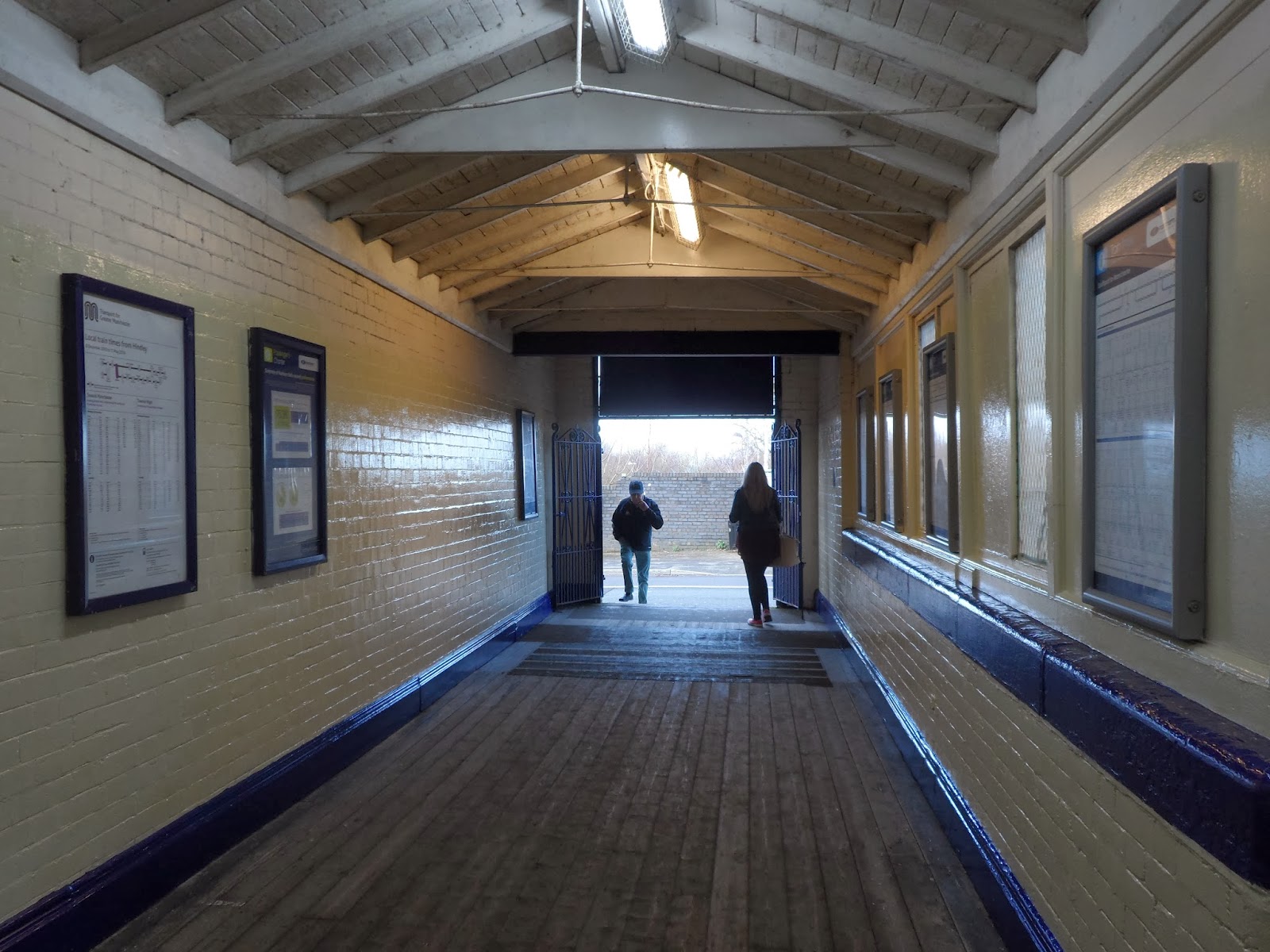 It's also got a massive station sign, so I crossed the road in an effort to fit the whole thing in. 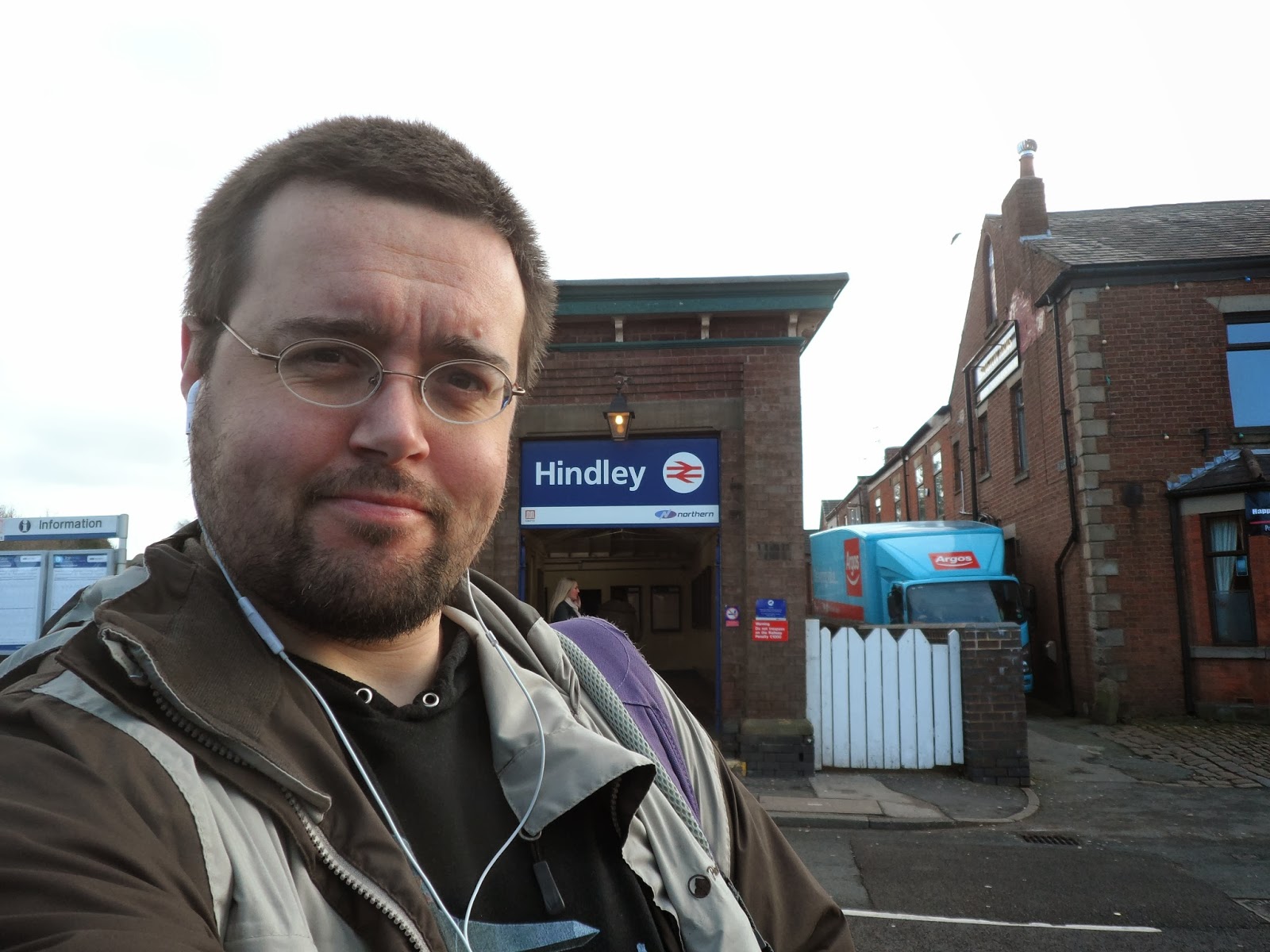 I passed through the centre of Hindley, a few small local shops gathered around a mini roundabout.  Florists, nail salons, a couple of pubs.   An old service station, now given over to car washing, with two men furiously soaping up a Ford while its owner kept her baby busy in its pushchair.  A patch of bare ground was wet and muddy, with a single skateboard wedged in the centre of the puddle, upside down. 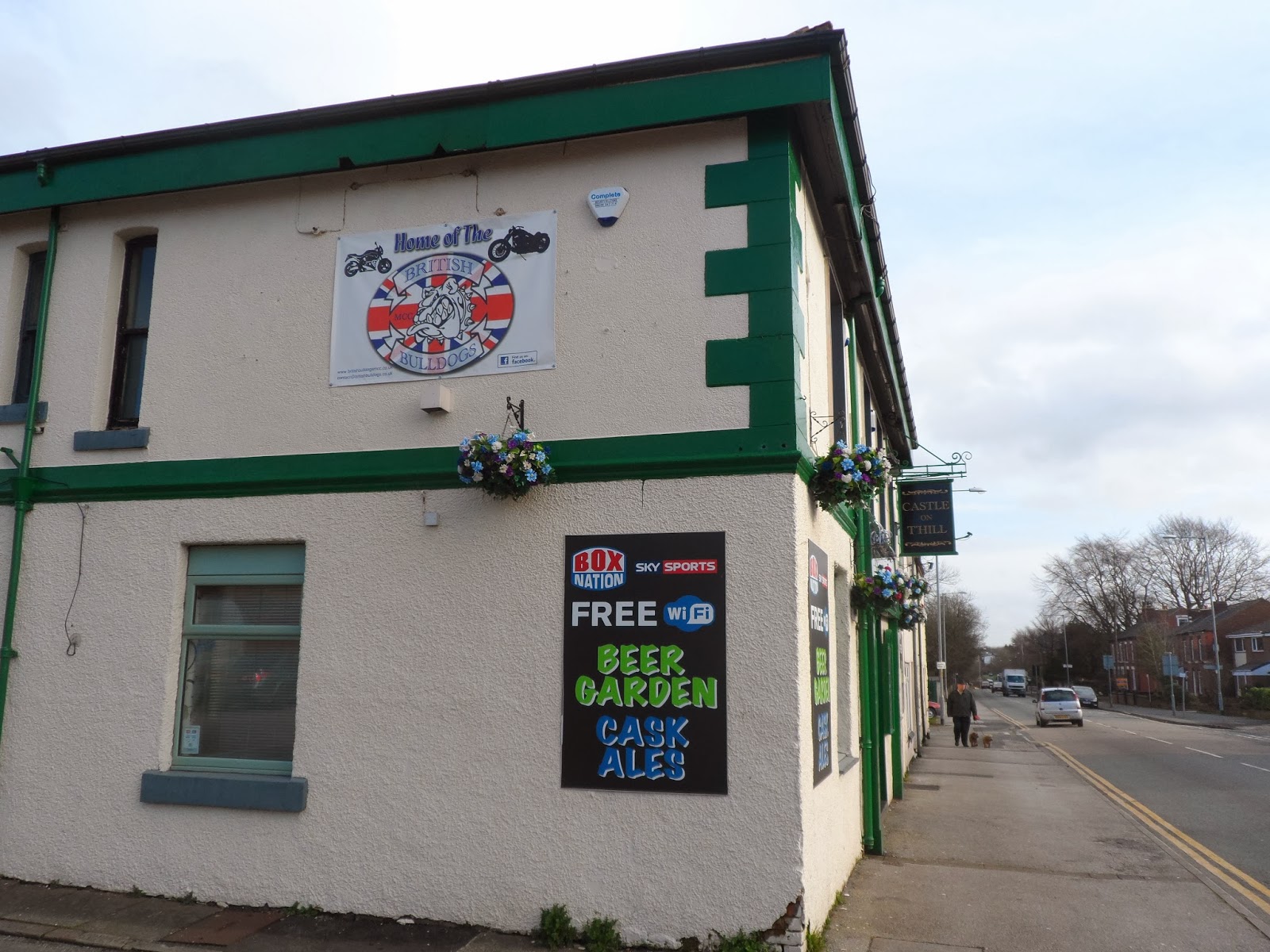 That pub's called the Castle on t'Hill, but I misread it, and genuinely spent a few minutes wondering what the hell a "thill" was.  I've lived up north for half my life now but I'll never truly be one of them.  Meanwhile a single woman walked slowly through the cemetery gates, head low. 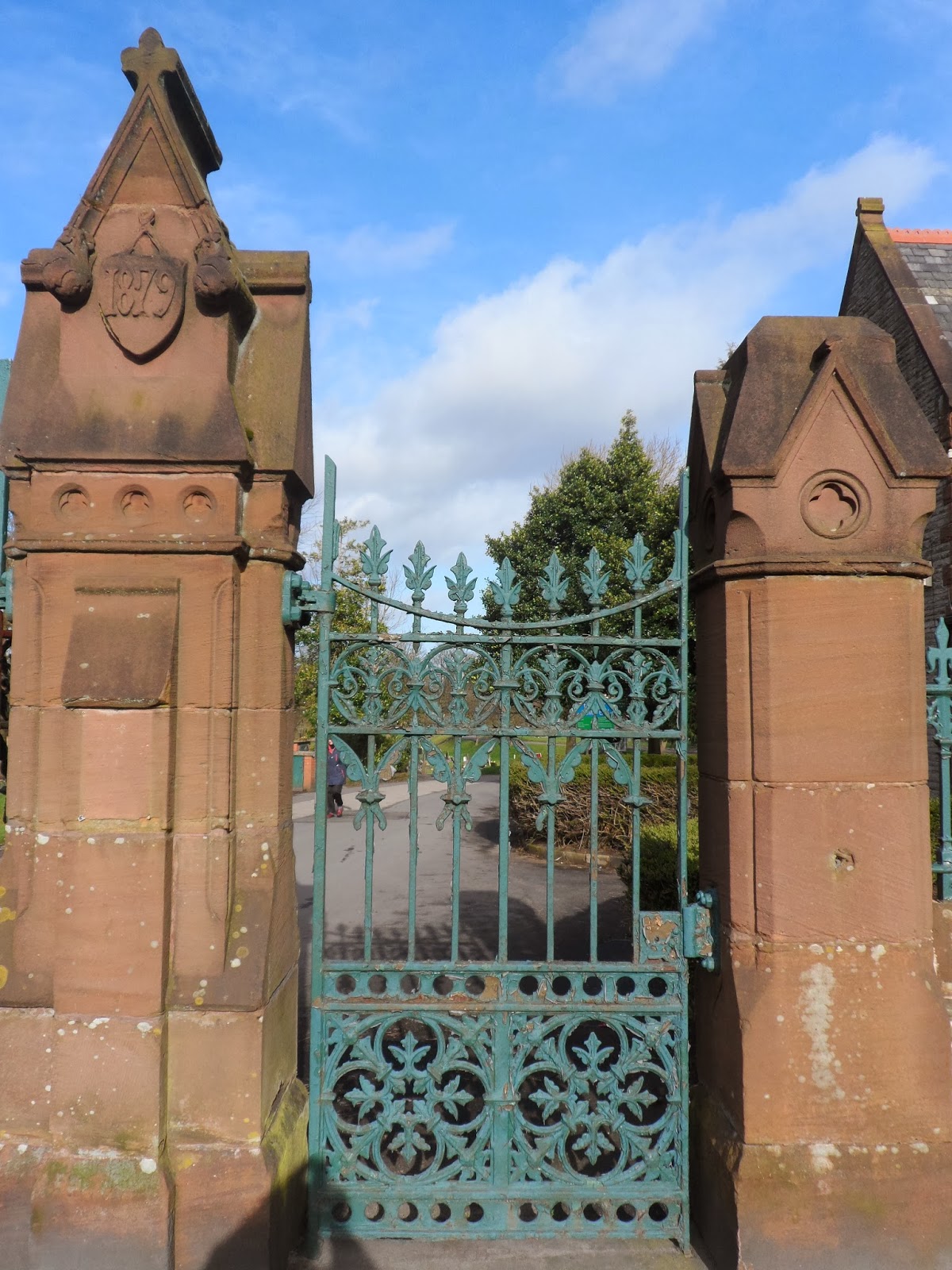 I crossed the road as the countryside came in, brown fields and hedges that snatched at me with bare branches.  I was crossing over from Wigan into Bolton, a fact heralded with a deeply irritating sign. 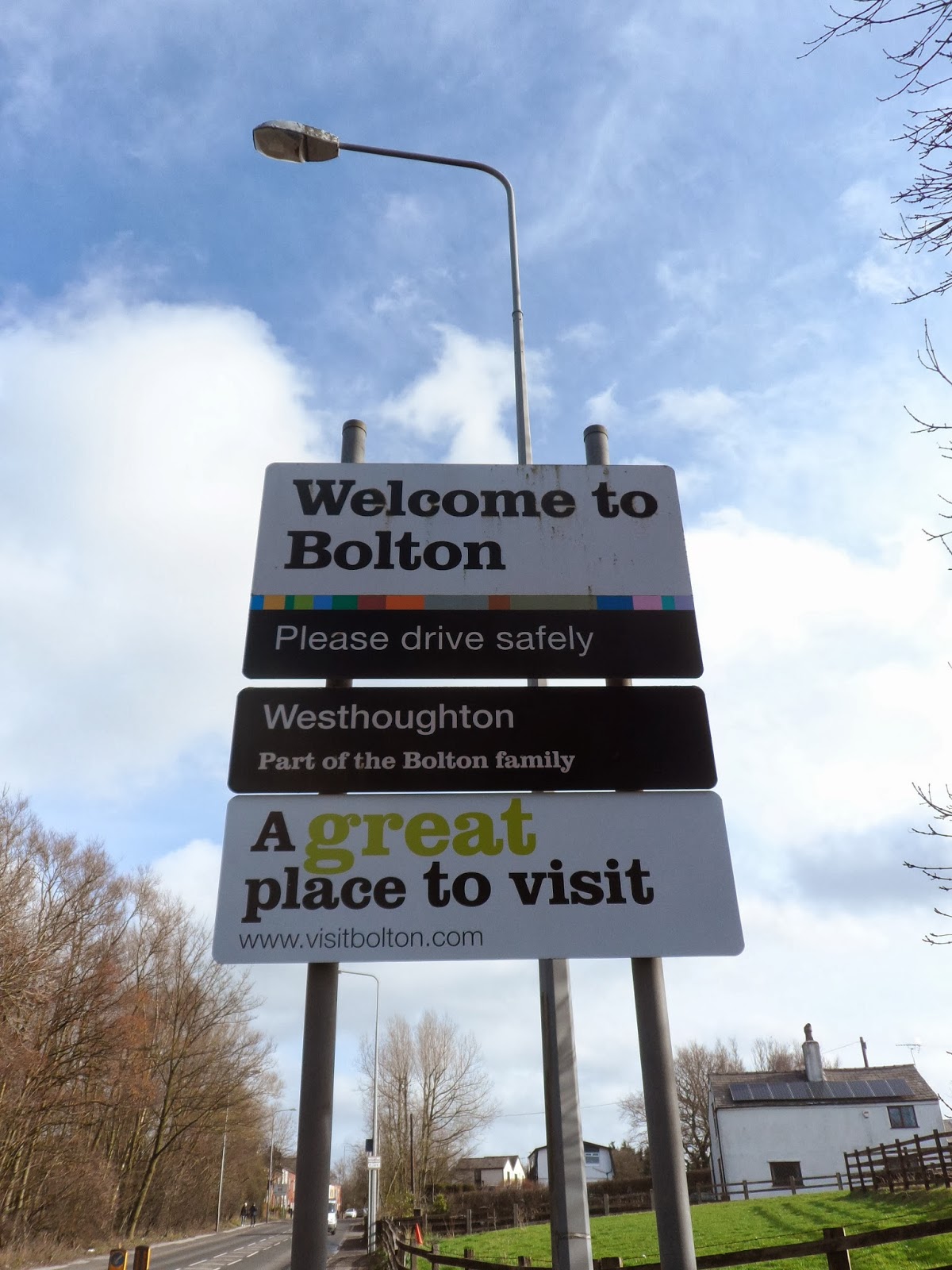 Westhoughton: Part of the Bolton family.  That makes me incandescent with rage.  I wanted to rip the sign down and throw it in the nearest field and drive a tractor over it.  It's a village, it's not Auntie Beryl with the funny hip.  It's not part of any family, and it's certainly not part of the "Bolton" family.  I bet there was a whole presentation about that, a massive press release, about how these new signs would promote inclusiveness and happiness and make everyone in the borough love the arse off one another.  It actually just makes everyone roll their eyes and wonder what exactly their Council Tax pays for.

Also, the "great" on that bottom sign board is difficult to see in direct sunlight, so it looks like the sign says "Welcome to Bolton: A place to visit".  Which is undeniably true.

Westhoughton itself seems to have a similar attitude to that sign as me, because ten yards further down the road is another one: 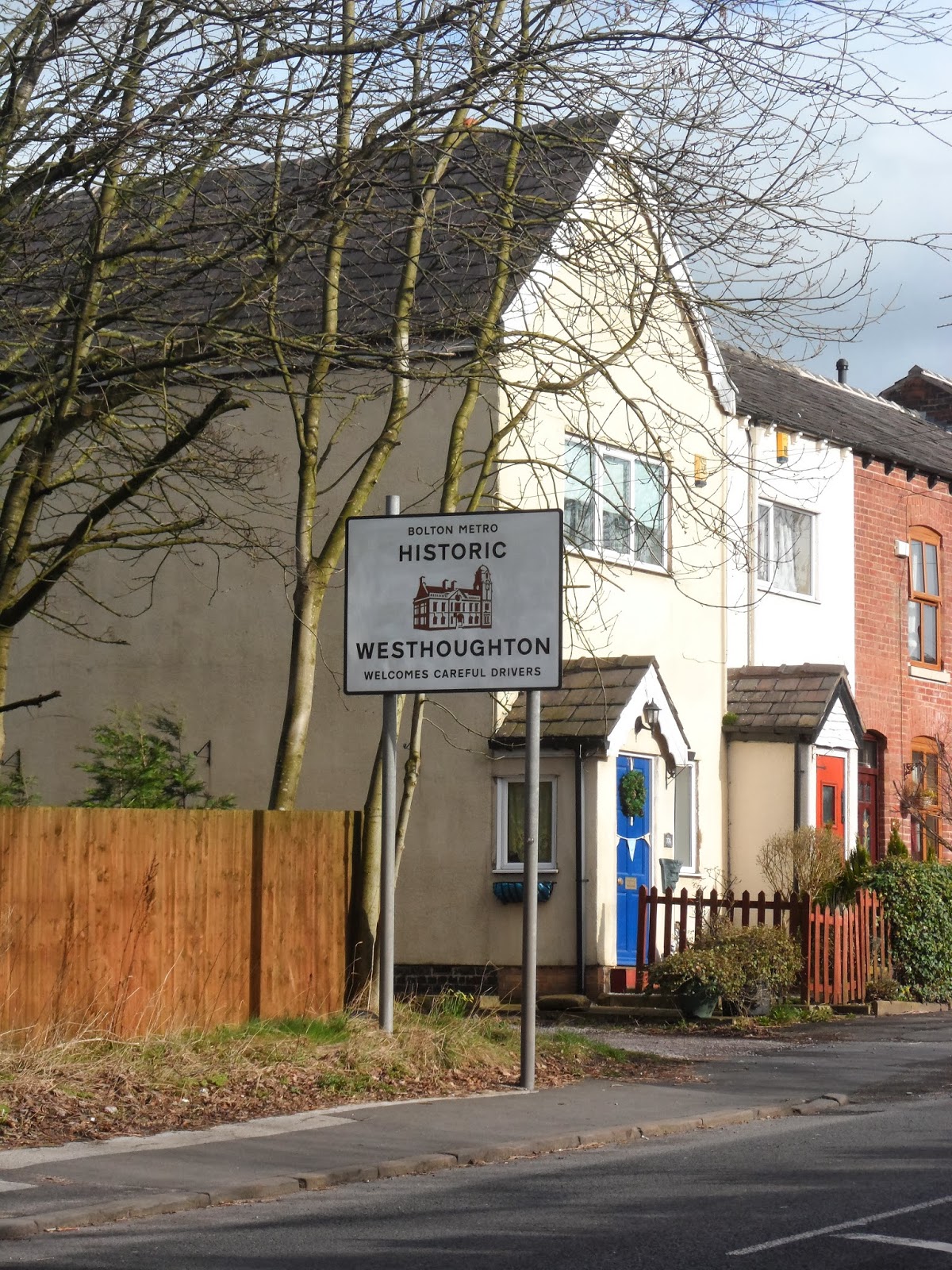 That's more like it.  Simple, descriptive, and welcoming.  I bet no-one focus grouped that, and yet it's 100% more successful.

Although - full disclosure - Westhoughton wasn't much to write home about.  A few dinky houses, a golf course, a playground.  A phone box promised "internet", but it had been downgraded to a standard payphone.  It didn't even take cards.  I'm fascinated to know who at BT thought that the future was surfing Amazon in a draughty box in full view of your neighbours, tapping out personal e-mails on a rust-proof keyboard and hoping no-one would go by and spot you was on Xtube. 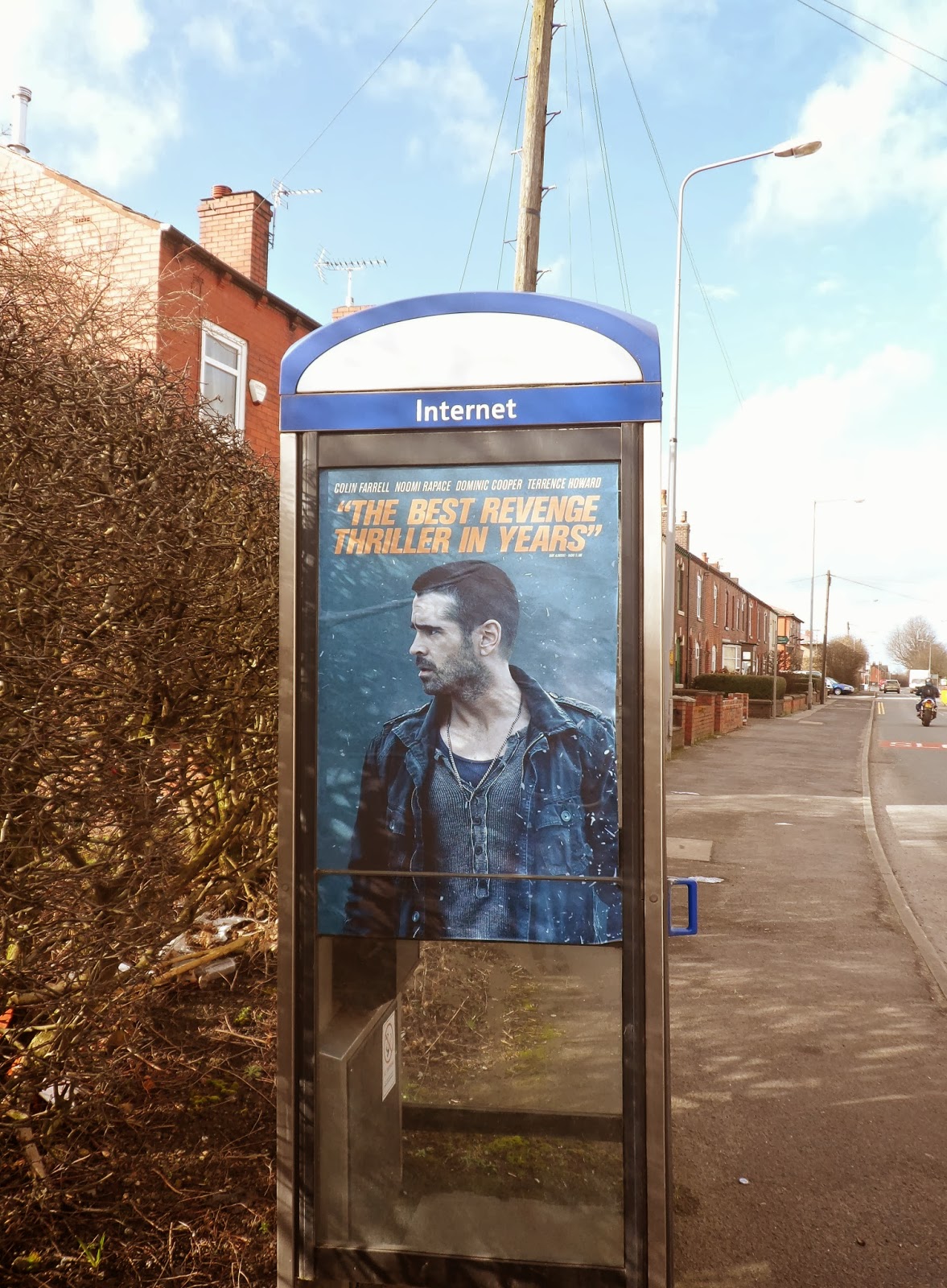 The presence of Colin Farrell may have played a part in me taking that photograph.

I crossed back over the railway line and entered Daisy Hill.  That's a place, not a person, you filthy minded perv.  There were long rows of corporation houses and mature trees.  The trees had also given their names to the local avenues.  It was halcyon suburbia.  I passed an ugly Costcutter, and a little wooden hut that housed the local youth centre, then ducked down a back street towards the station. 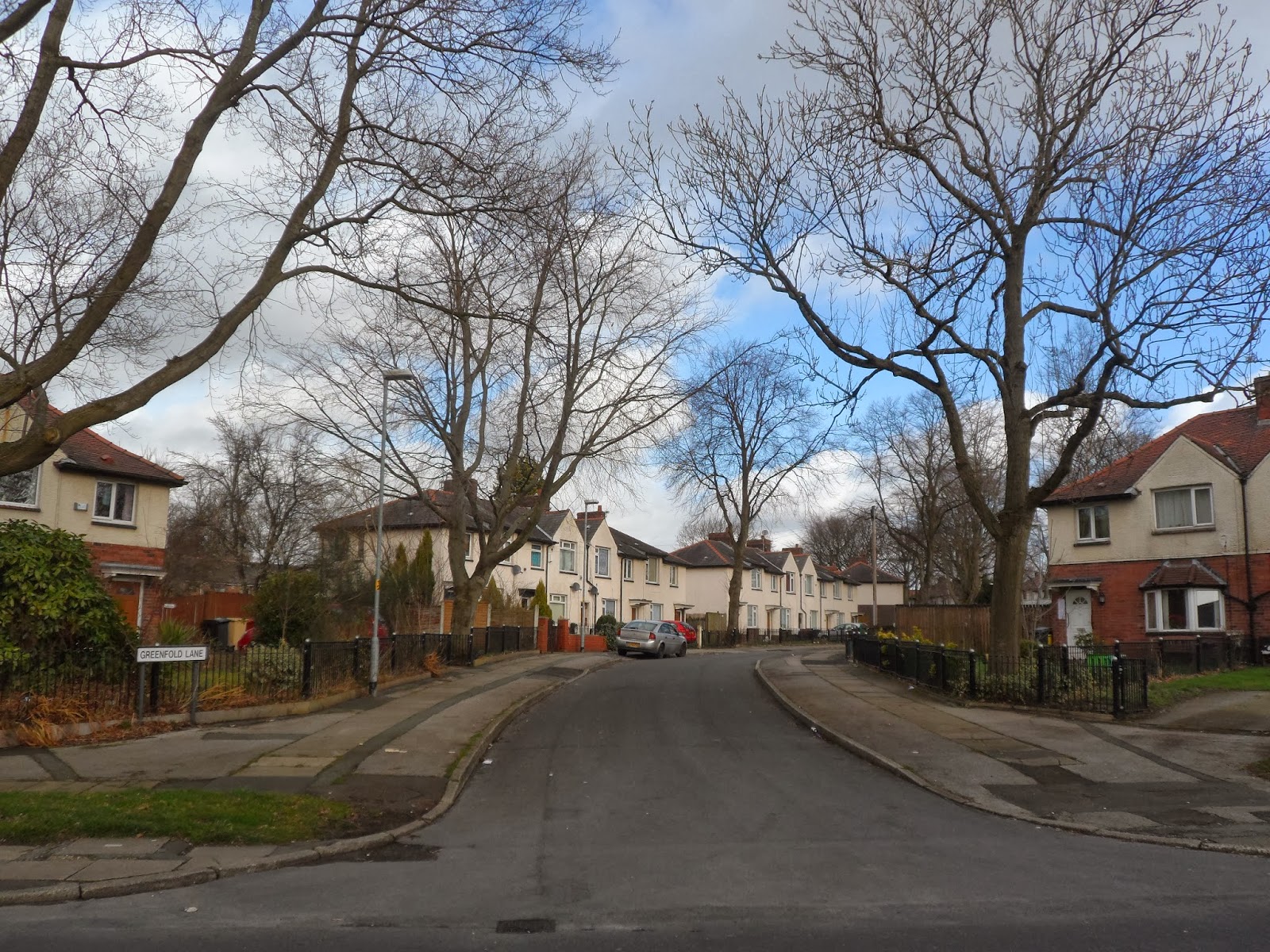 Now, I am thankful we live in a free country.  A nation where you are free to live, work and worship as you see fit.  Where an Englishman's home is his castle.  A private fiefdom with its own rules and eccentricities.  It's wonderful.

I am none the less glad I don't live next door to this person. 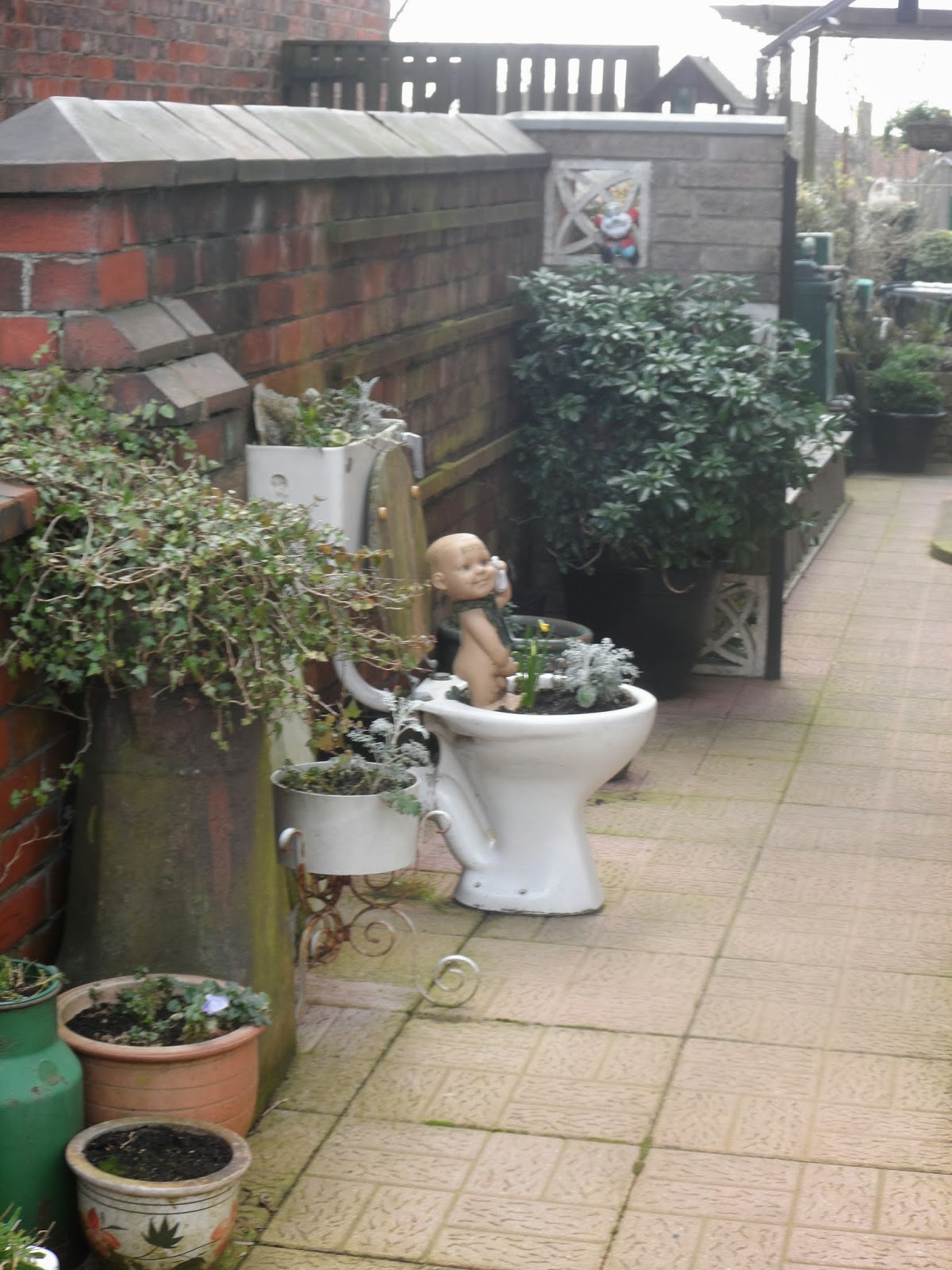 In case you think you've somehow ingested a load of hallucinogenics, I can assure you that, yes, that is a toilet turned into a plant pot with a naked baby doll in it.  It's in a real person's front garden.  Someone genuinely thought, "all these plants are nice enough, but what would make them look much better would be a big lump of Armitage Shanks".  Oh, and the doll is holding its penis, presumably while it wees from within the toilet, and it has "Buster" written on its forehead.

I have no idea. 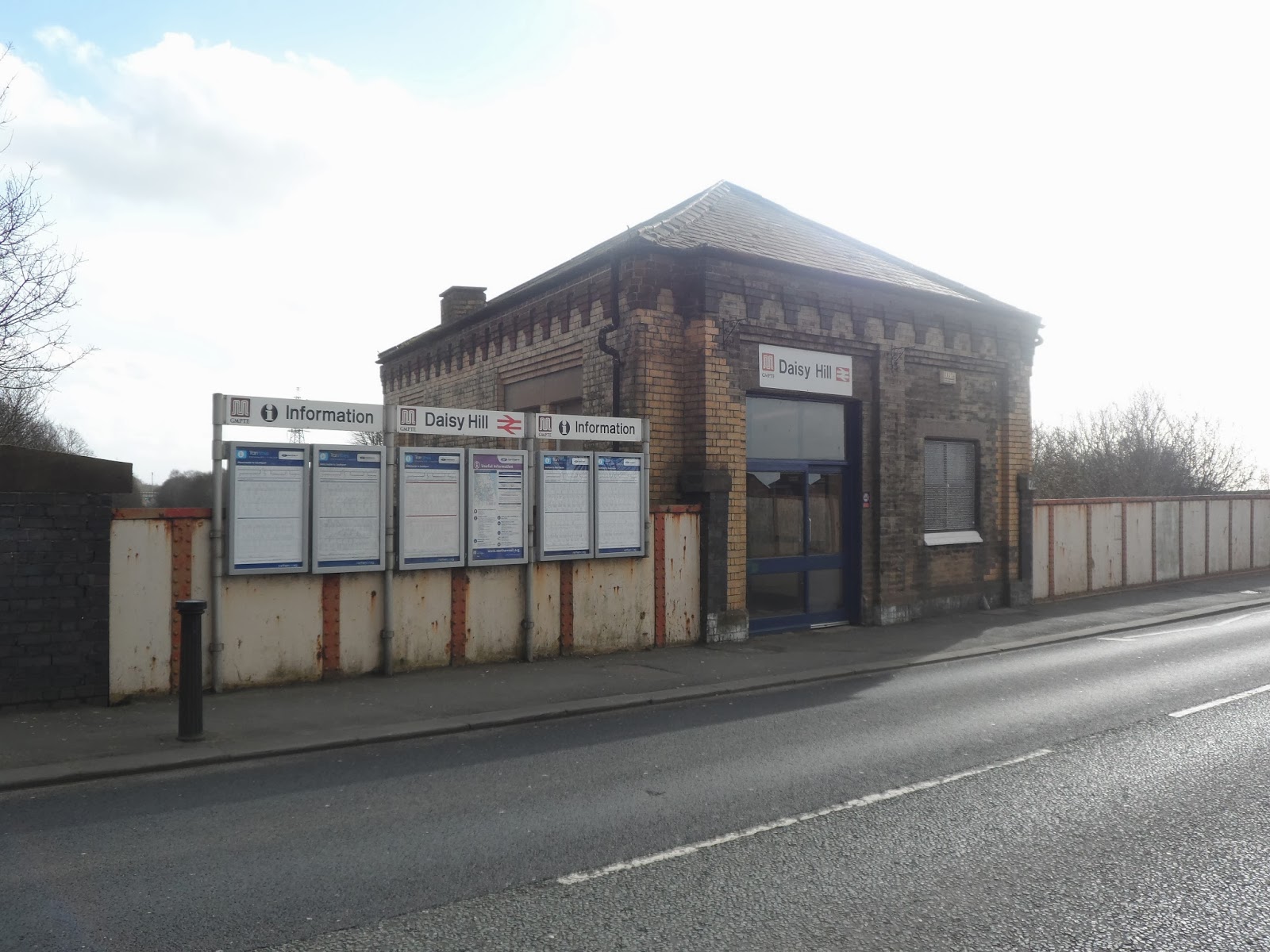 Fortunately Daisy Hill appeared to drag me back to the real world.  It was another sweet little station, a yellowbrick cube that looked like it had been there forever.  Inside it was another working ticket office and a pleasing amount of greenery. 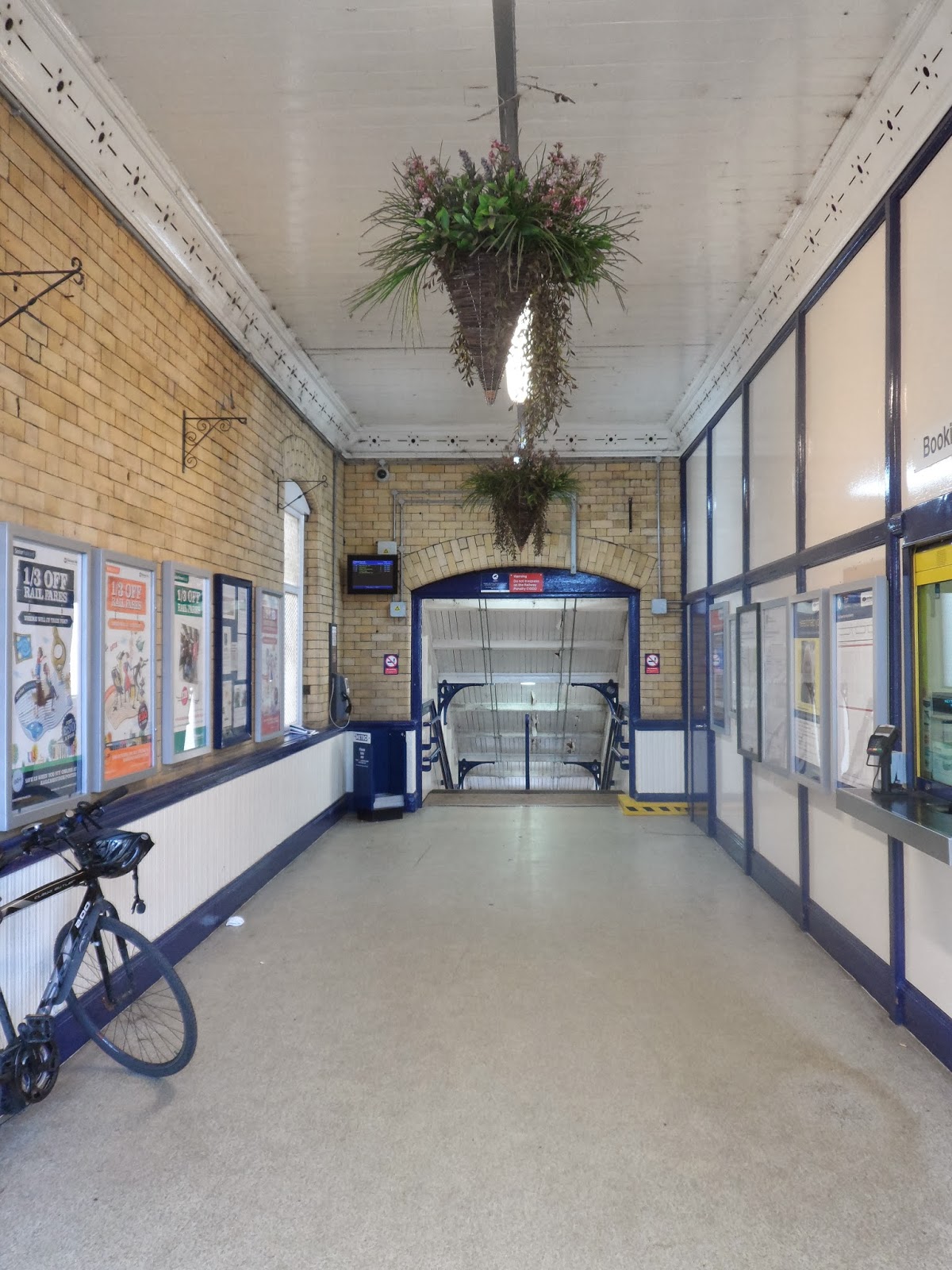 I wandered down to the platform.  At the foot of the steps was a woman in a wheelchair, which baffled me because I couldn't work out how she'd got down there.  Did she bump down every stair?  Did someone carry her down?  I pondered it while I sat on a bench and ate my sandwiches.  All that walking had made me hungry, and even though it was barely eleven, I had to have something. 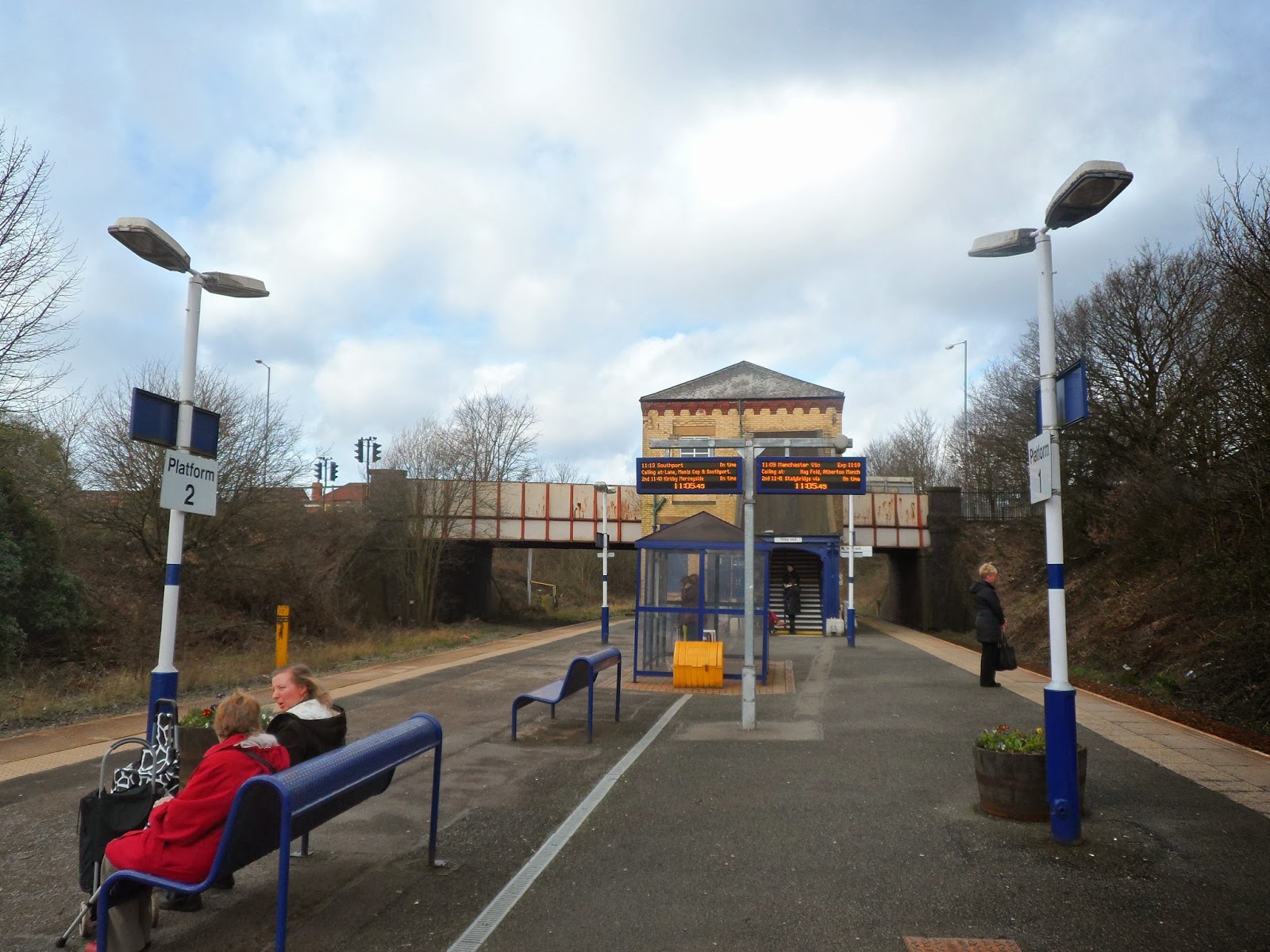 Hindley and Daisy Hill had formed a pleasing double act, a couple of nice historic stations to cheer me up.  I wondered if it would last along the rest of the line to Manchester. 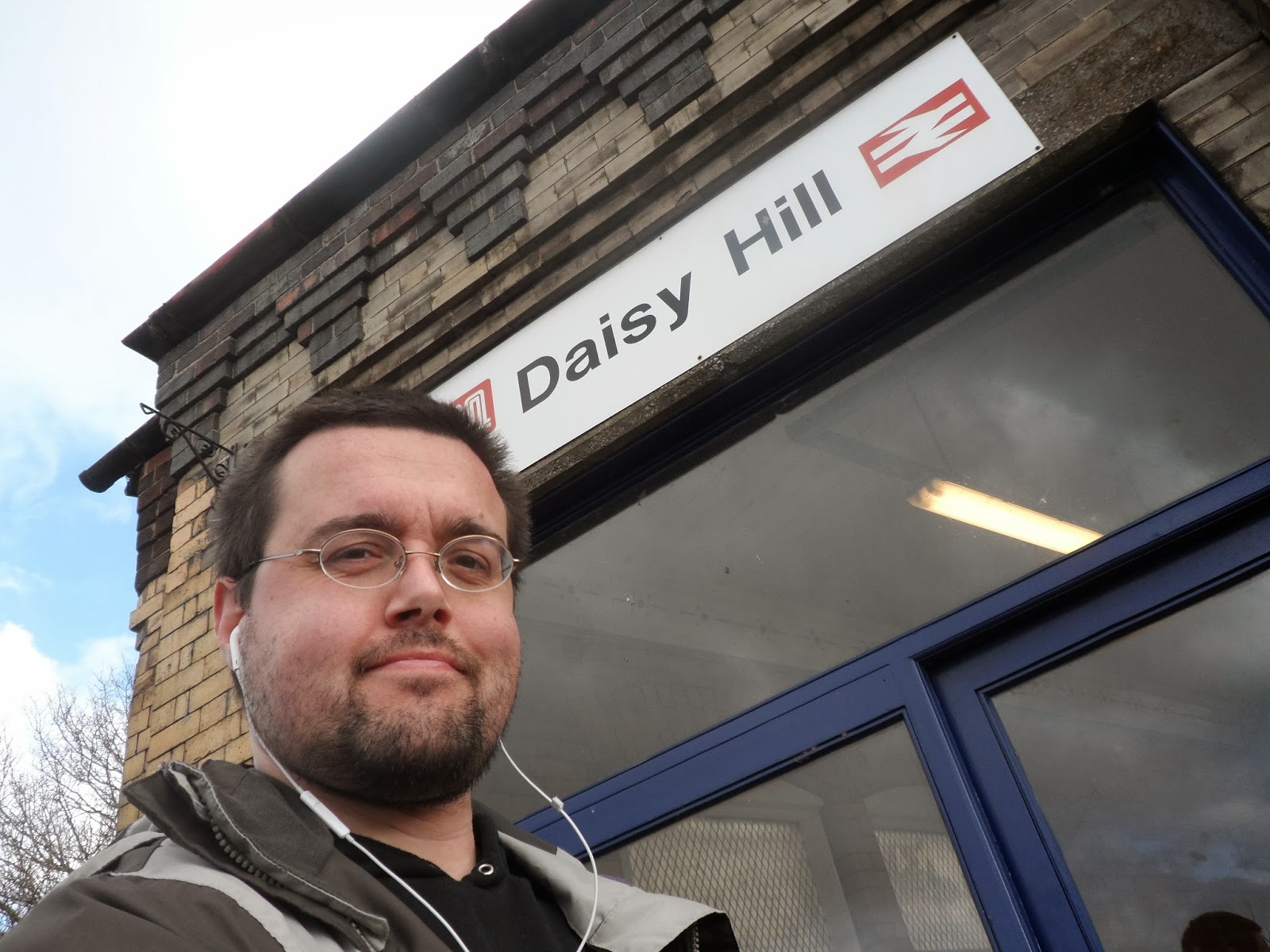