The Road From Wigan Pier 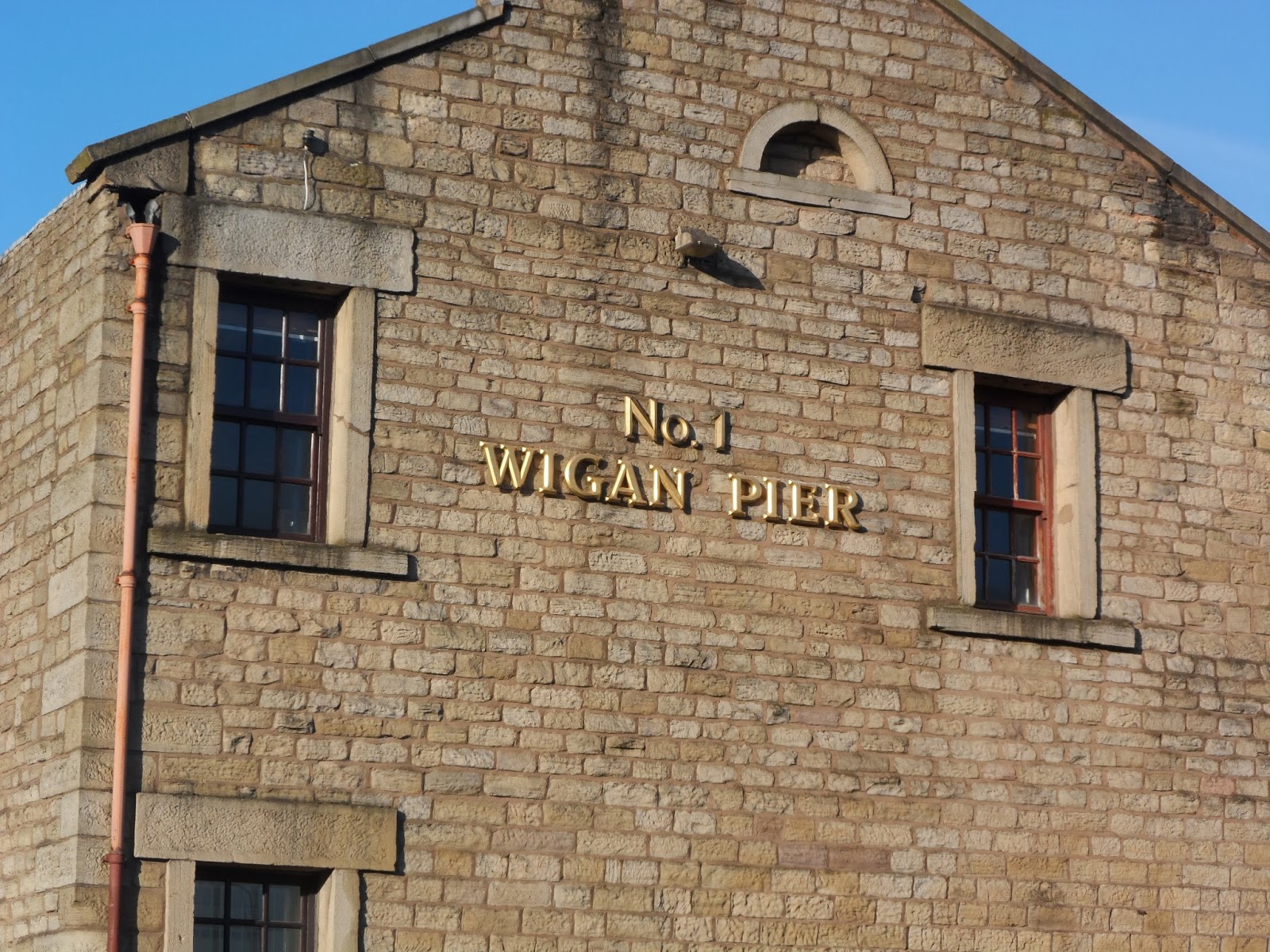 Regular readers (hello you!) will remember that I had a fairly disappointing customer experience with redspottedhanky.com in the New Year.  I had a bunch of points on my account which were wiped out on the 31st December.  I used every weapon in my arsenal - complaint e-mail, miserable tweet, snotty blog post - and this resulted in a grand outcome of absolutely sod all.  So I resolved never to use them again and flounced off.

Only problem was, I had a bunch of actual railway vouchers on the account which would need to be spent.  If I was properly flouncing off, I would never have darkened their website again, but I resented them getting to keep my reward and me getting nothing.  Besides, if they were going to pay for it, why shouldn't I take advantage and get a free trip out?  After a bit of poking around I found that I could get a return to Wigan without having to hand over any actual cash, so I booked that up and set off on a crisp Tuesday morning. 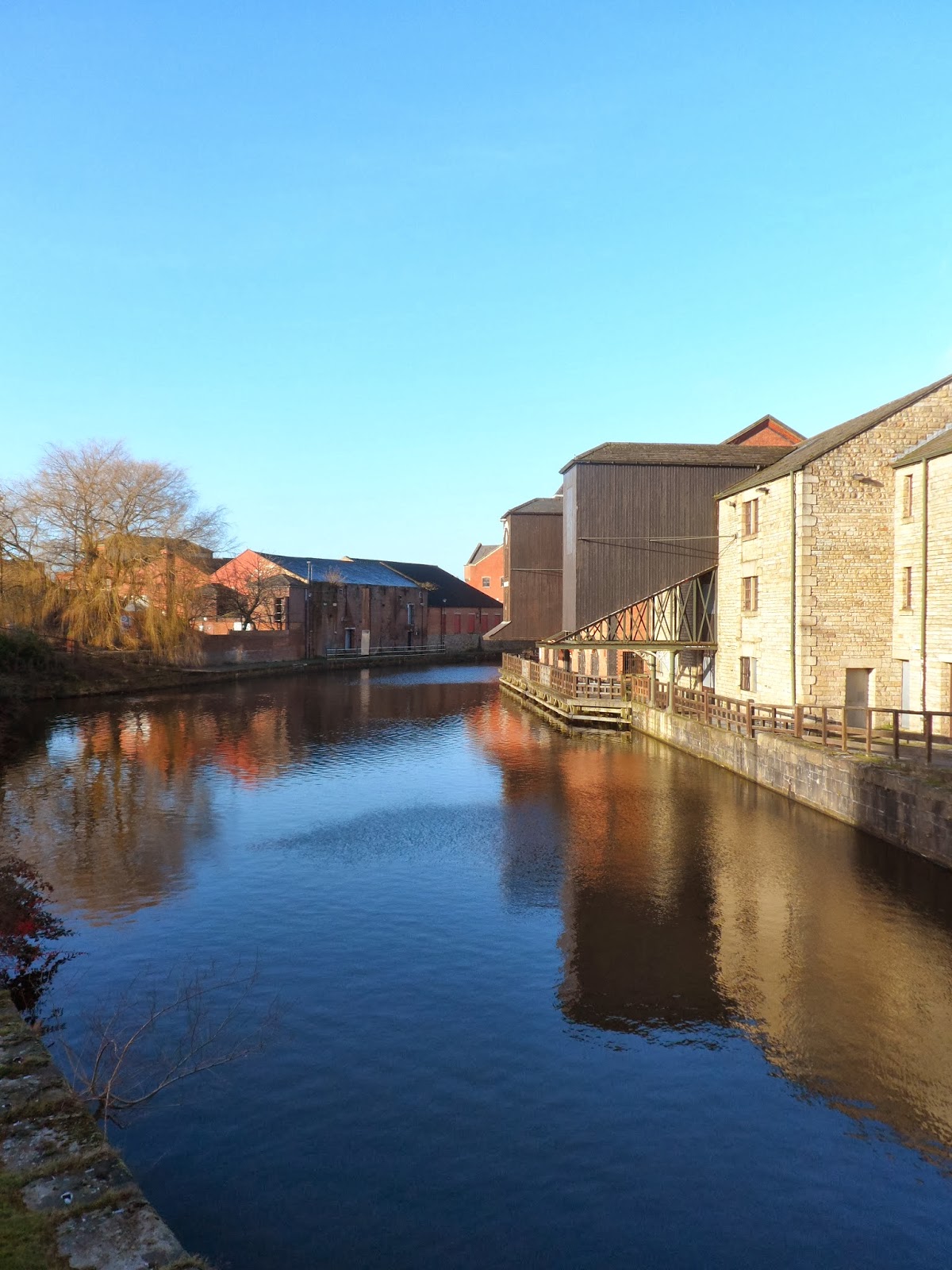 Last time I came out to Wigan I didn't actually make it as far as the famous Pier, so I took the opportunity to right that wrong.  The Pier may be the most famous piece of sarcasm in the world; one theory as to how this little canal basin got such an exotic name is that people from Southport (home of a rather more impressive Pier) passed the little stretch of water on the train and joked that it was Wigan's version.

Orwell, of course, claimed that it had been demolished and so didn't bother going.  During his time in the town Wigan was a scarred, blackened home of slag heaps and destitution; I passed a Domino's Pizza and an HSS Hire, so things have improved slightly.  I crossed the busy road and stood next to a cast iron man to take in the scene. 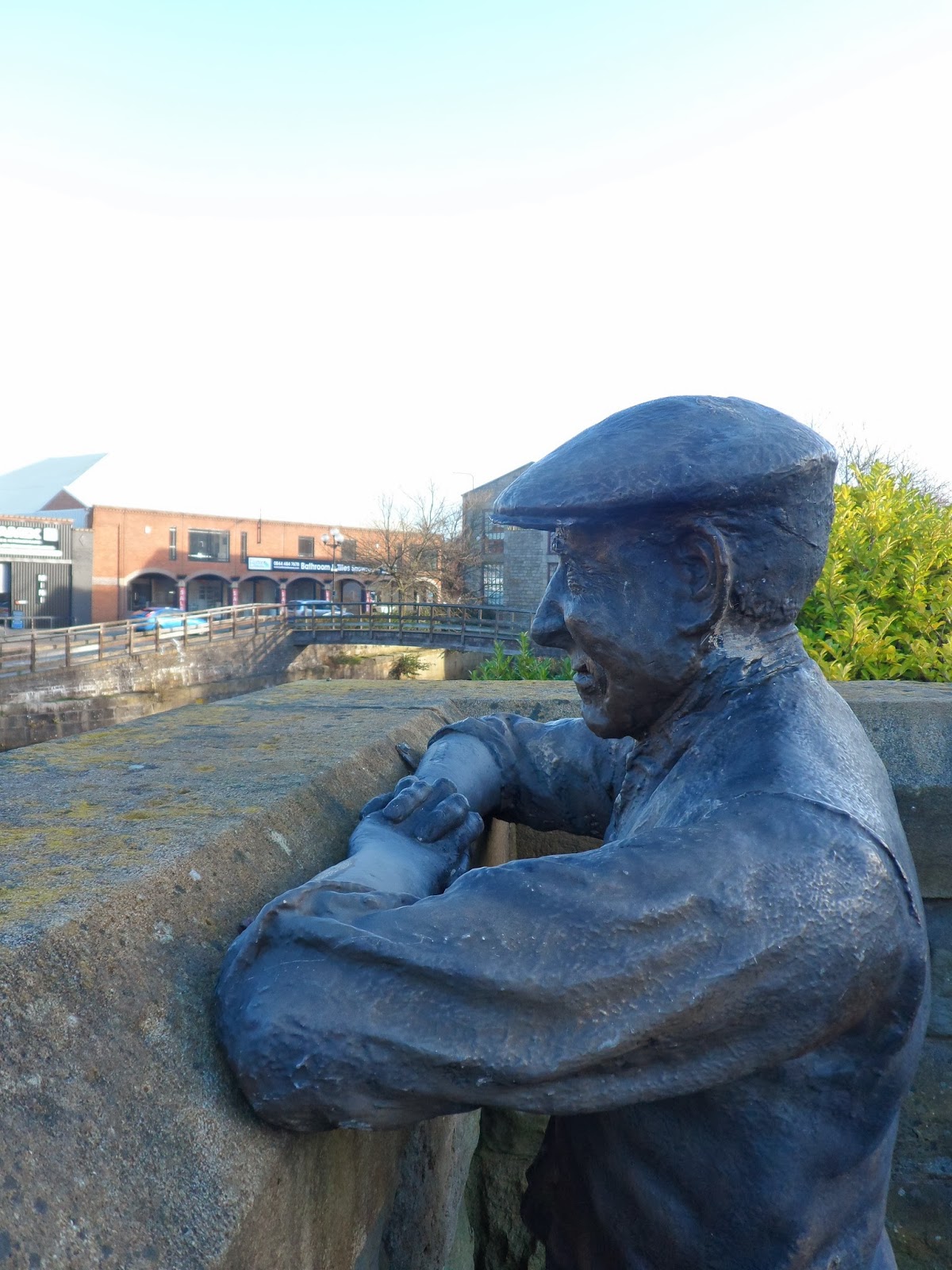 Sadly, there's not much to see.  Wigan Pier was just a dock, a place to unload canal barges, and so its fame far outstrips the reality.  The locals tried to make it into a tourist attraction when the industry collapsed, but it didn't work.  There are blistered signs for the long closed museum of Victorian life, and The Orwell pub is closed and boarded up, about as far from the Moon Under Water as it's possible to get. 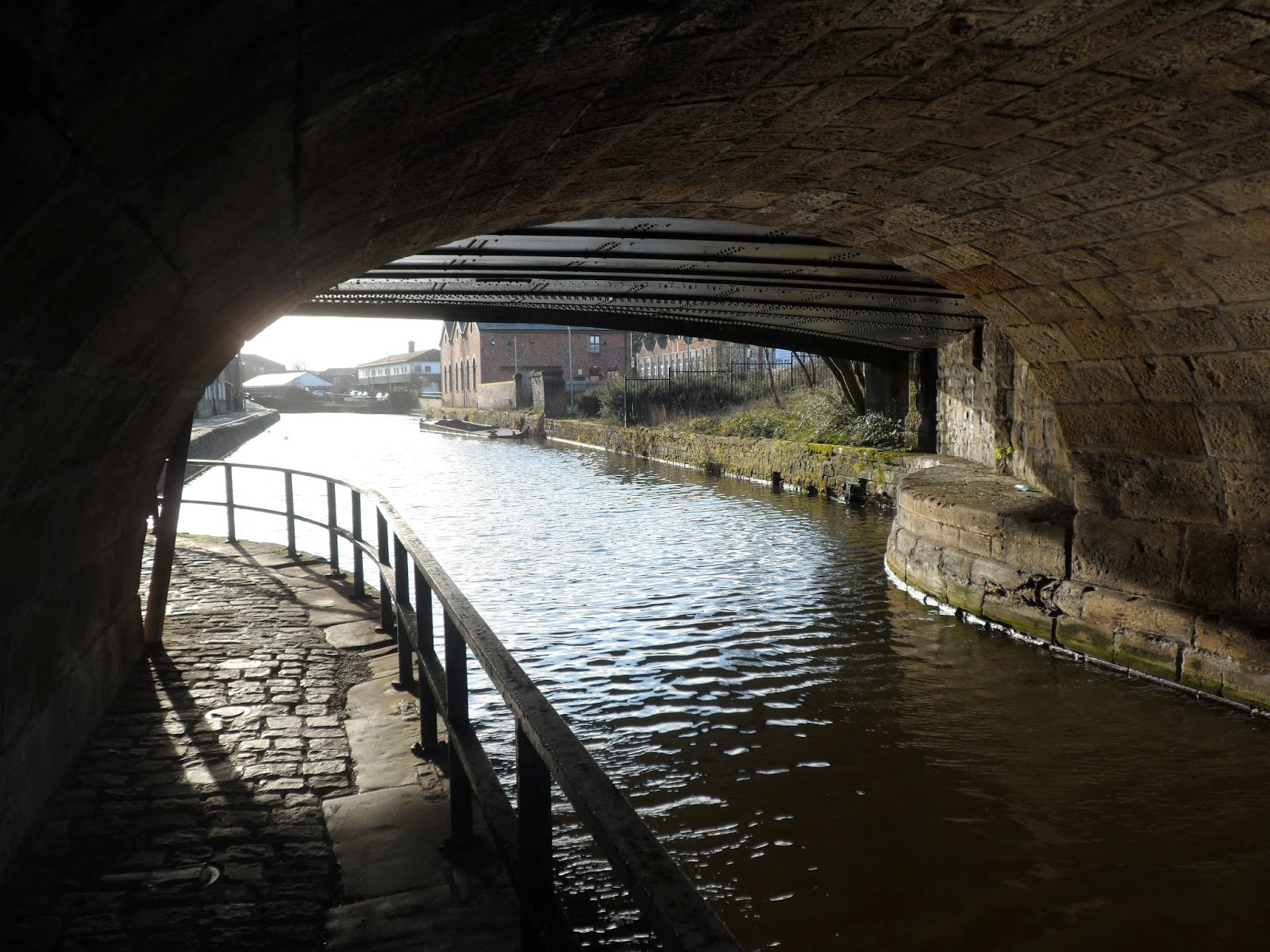 This, and the area around it, now forms the "Wigan Pier Quarter".  New flats have been strung along the canal edge, but there are still plenty of vacant warehouses and mills.  The Trencherfield Mill stabbed the skyline, odd windows showing occupation but mostly empty.

I had the towpath to myself for the most part.  It was just after nine, too late for commuters, too early for walkers.  It was carefully paved with smooth cobblestones, which look charming, but are awful to walk on; their surface was rounded with age too, and I ended up walking right on the edge where the stones were smooth and level.  I pictured myself toppling in and drowning because, whenever I find myself in a mildly perilous situation, I like to get a ghoulish thrill by imagining the worst case scenario.  I decided that I'd probably be able to haul myself back out of the canal - it wasn't too wide or choppy - but my camera and my phone would be ruined, so it was probably best not to try. 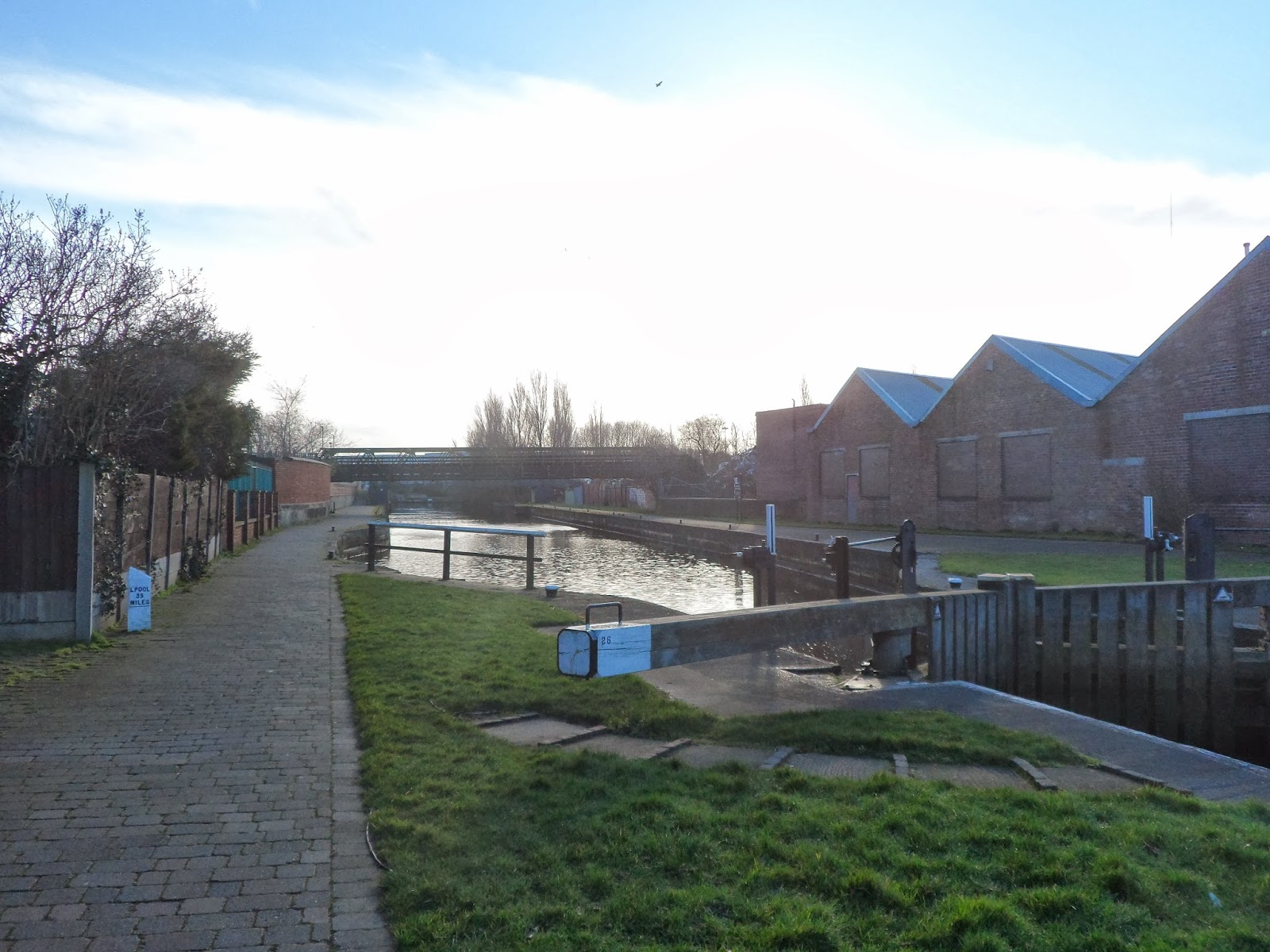 At a footbridge, a solid man dressed entirely in black swept onto the path ahead of me.  His rolling walk and long, thinning hair reminded me of Fish in the video for Kayleigh; his shoulders were hunched and he had an iPod rammed in his ears to soundtrack his stroll.  We walked in tandem for a while, the distance between us staying a constant couple of metres, until he stopped by another lock and lit a cigarette.  He eyed me as I passed, suspiciously, leaning against the gates. 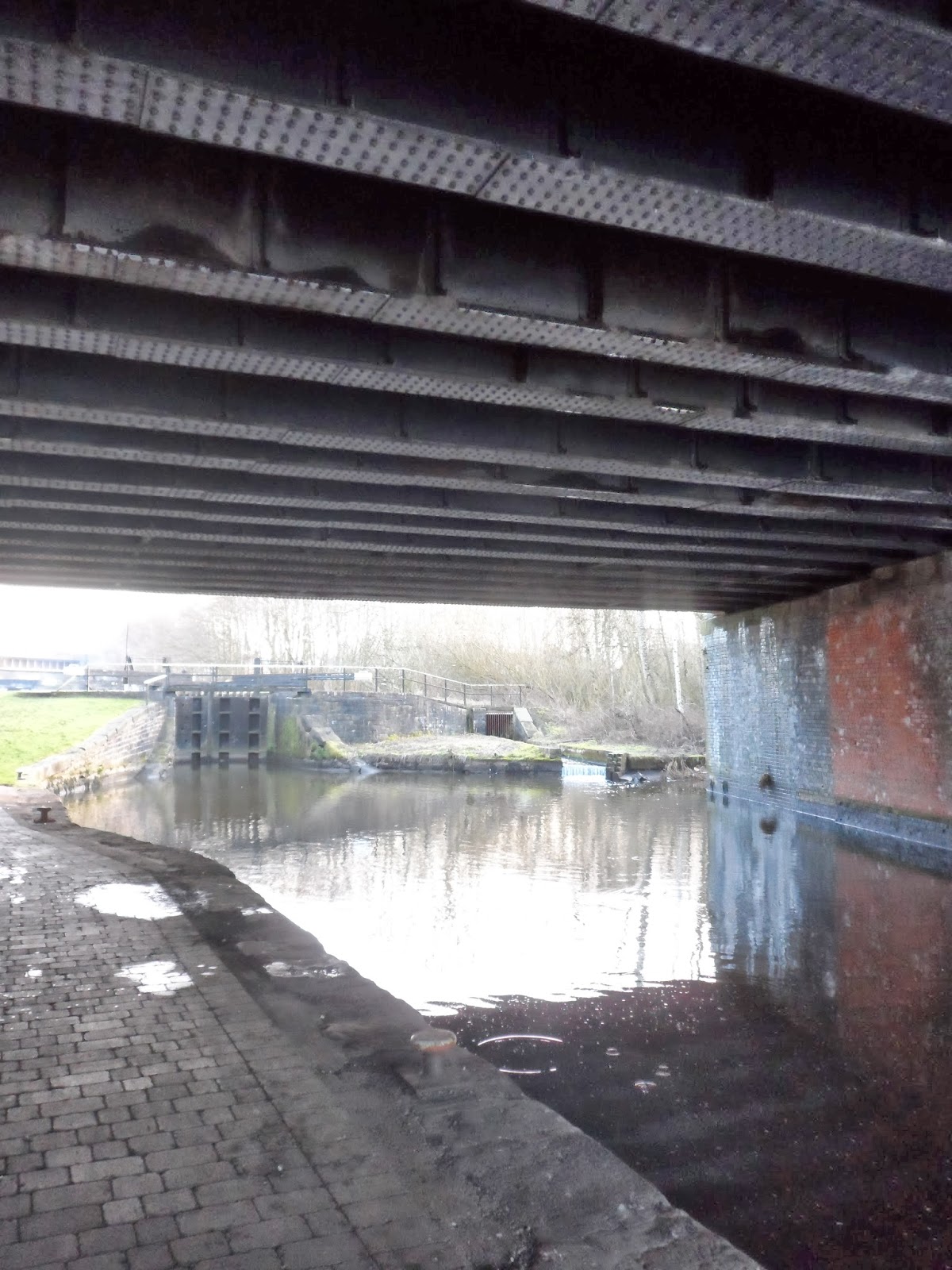 I continued past a mooring point with the unromantic name of "Girobank"; there were office blocks, and tables had been put on the grass for al fresco lunch breaks.  A little hut on my side, meanwhile, promised showers and "sanitation facilities" for barge users.  Worryingly, it also had a "no naked flames" sign, making me wonder what exactly canal trippers ate.

I climbed up off the waterside into a traffic jam.  The road into the town centre was a solid length of nose-to-bumper cars, barely moving.  Some of the drivers had even switched their engines off.  I wondered what the traffic must be like at eight o'clock on a Monday morning, or if there was an accident; it didn't bear thinking about.  Though I have to admit to a slight feeling of smugness as I strolled past. 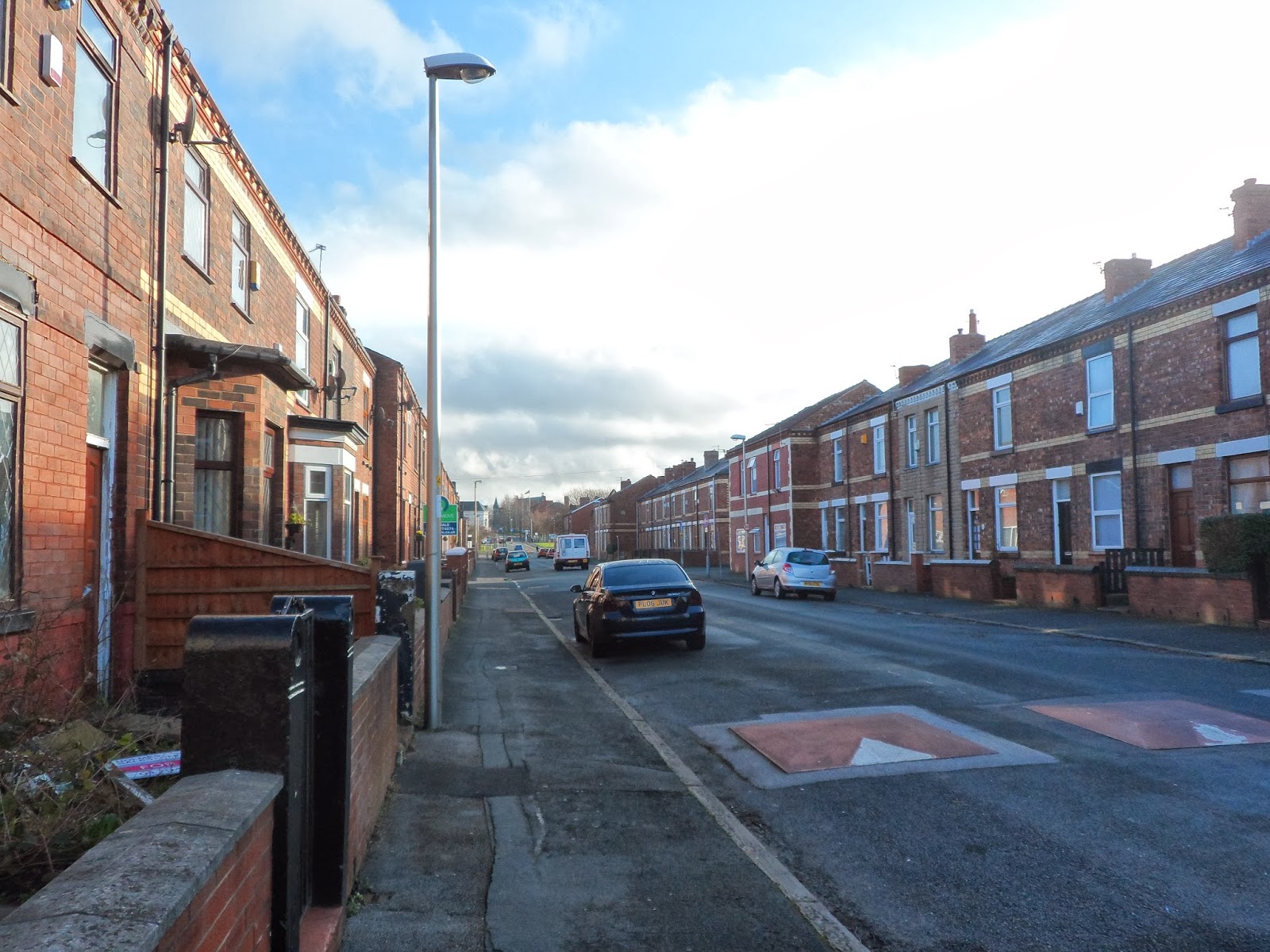 I was headed for Ince station, past rows of red brick terraces and traffic calmed side streets.  The one-way system was unfathomable - it seemed to be channeling all the traffic into dead ends, and none of them came back out again, raising the very real possibility that there is a wormhole in Wigan.  Maybe.

An impressive red Victorian office block with Council Offices emblazoned on the top was in the process of being refurbished; it had a sign alongside advertising one of those mysterious quangos who move into old Town Halls.  I'm not exactly sure what they did.  Presumably it was something that Wigan Council used to do quite happily until it was forced to privatise it as a "money saving" measure. 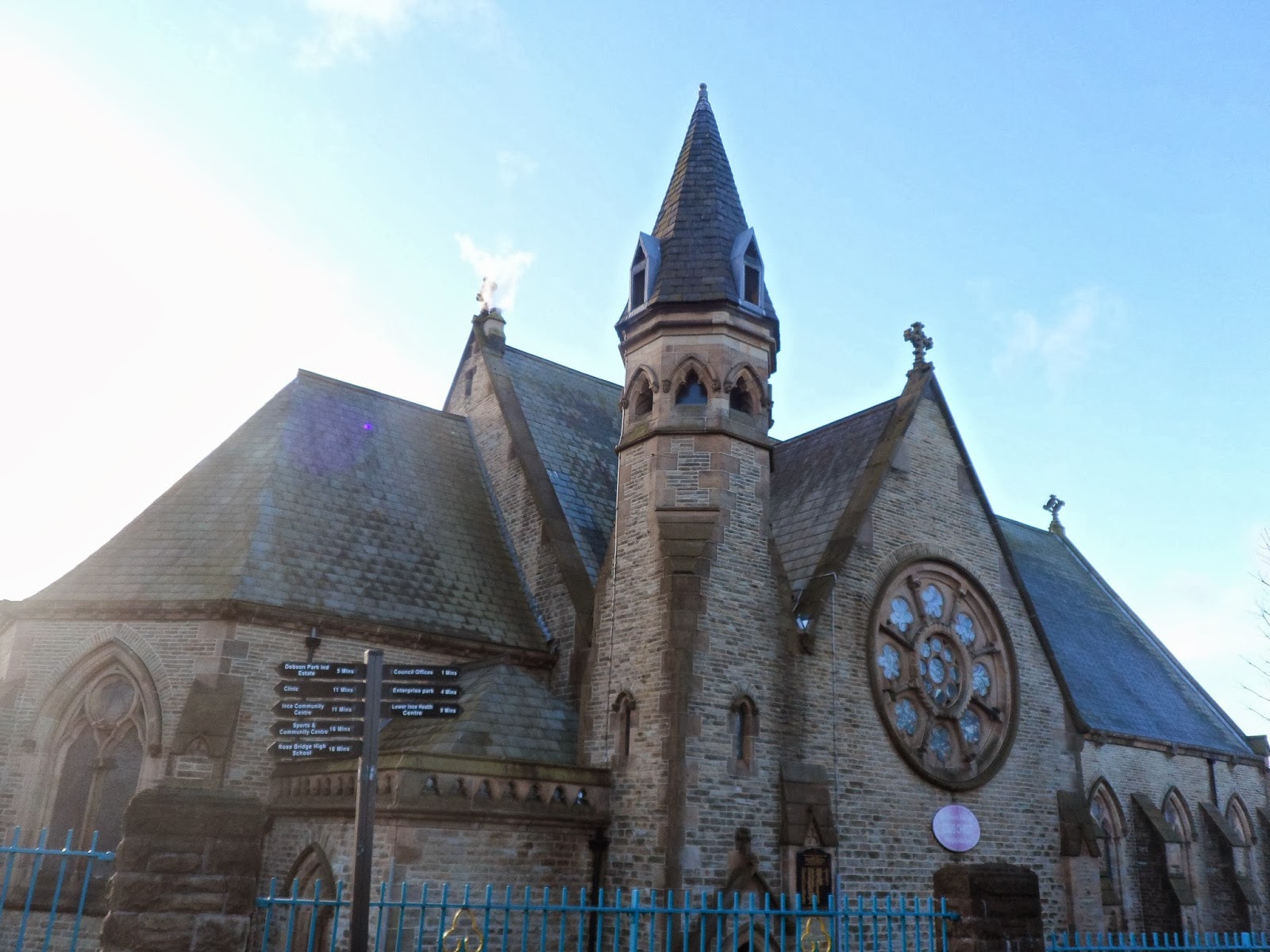 A handsome gateway, built of the same stone as the church opposite, marked the entrance to Ince station.  This is Ince (Manchester) according to National Rail, which differentiates it from Ince & Elton in Cheshire, but probably puts the back up of quite a few Wiganites. 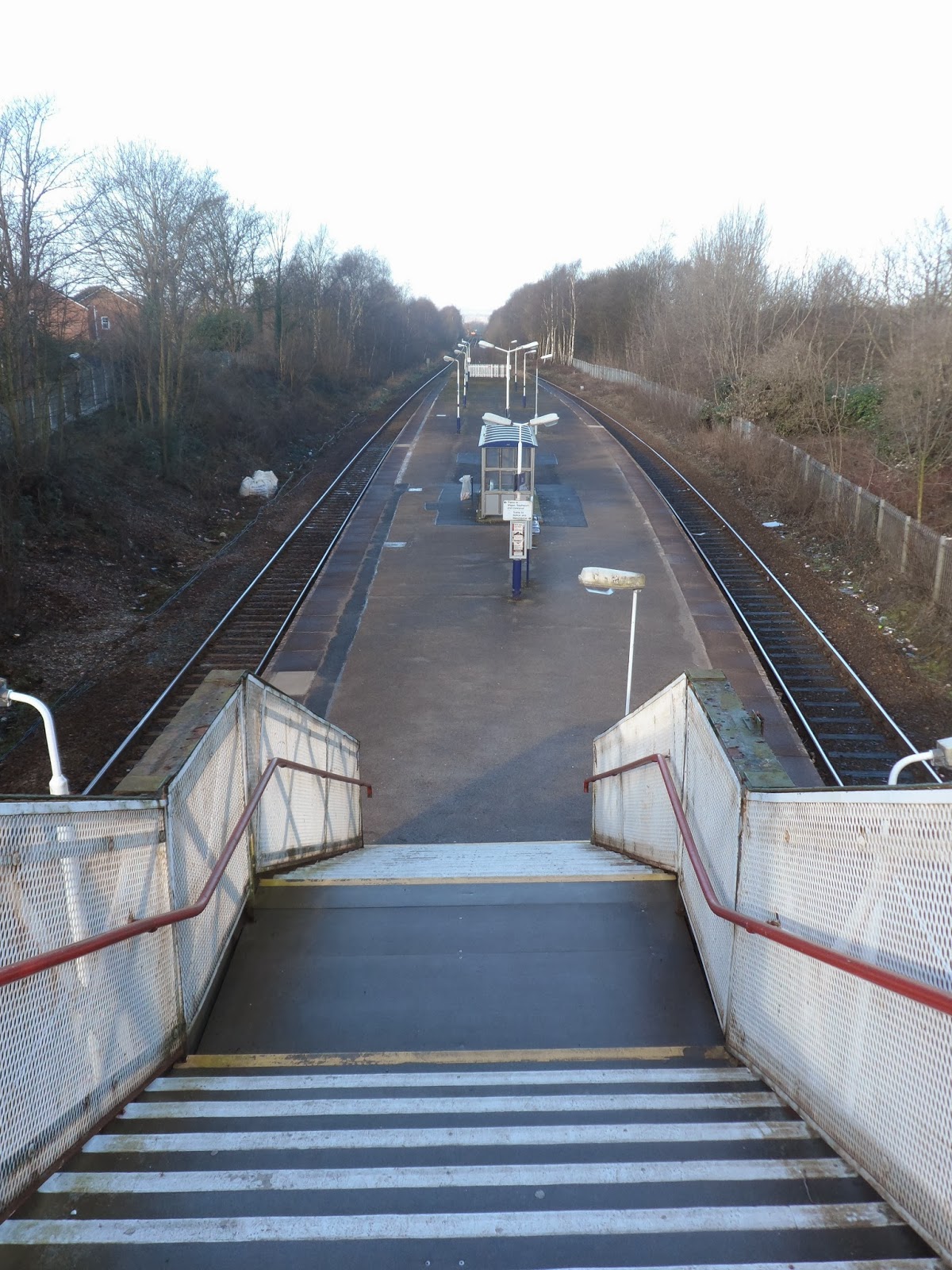 Later on I'd visit a number of fine stations further down the line, but Ince isn't one of them.  It's too close to Wigan town centre to attract suburbanites, too far from Victoria to get Manchester commuters, so it's now a strip of platform between rubbish-filled hedges and barely used.  A lot of trains pass through without stopping. 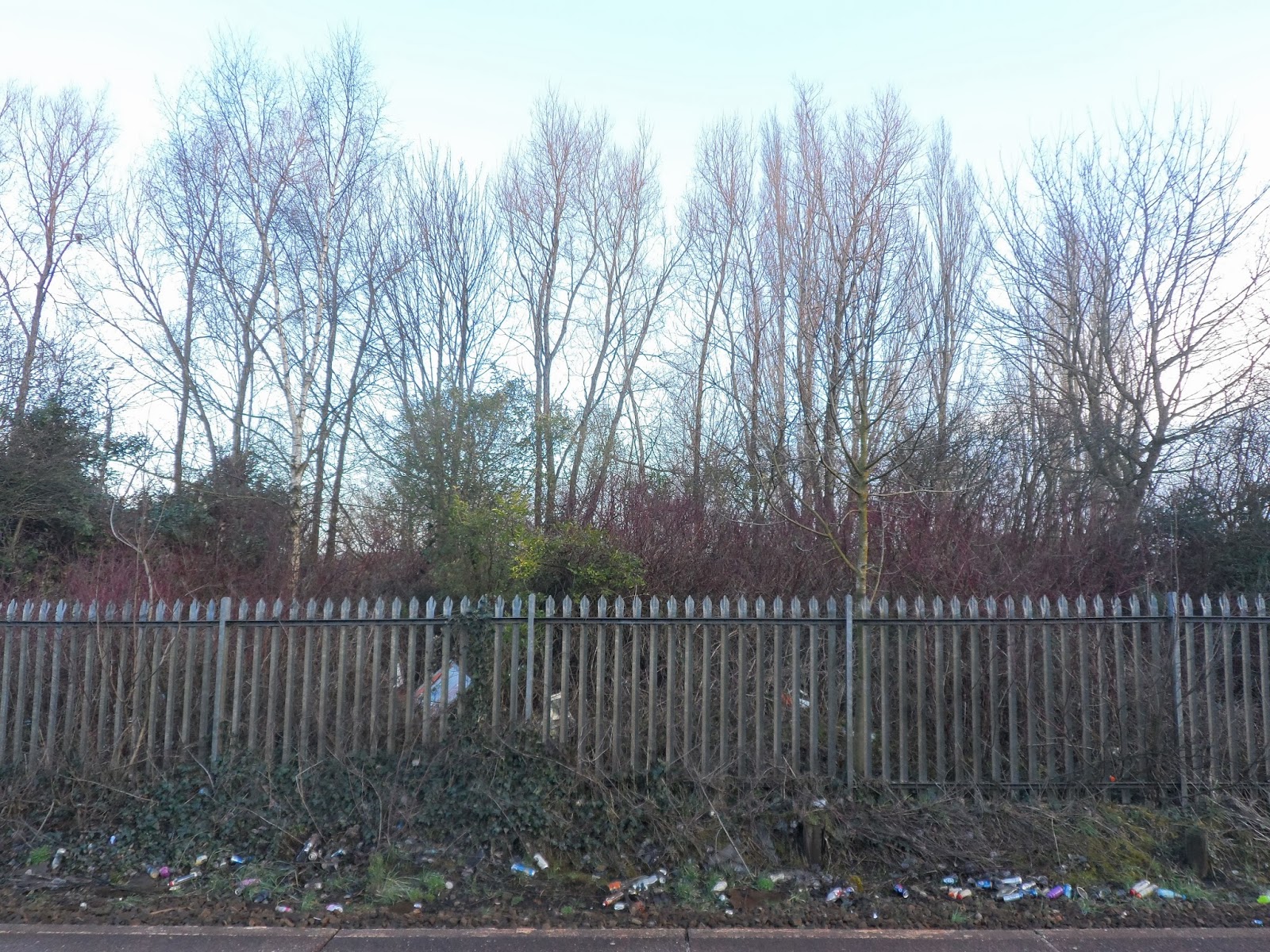 It has attracted a minor reputation as a venue for the very best of street art. 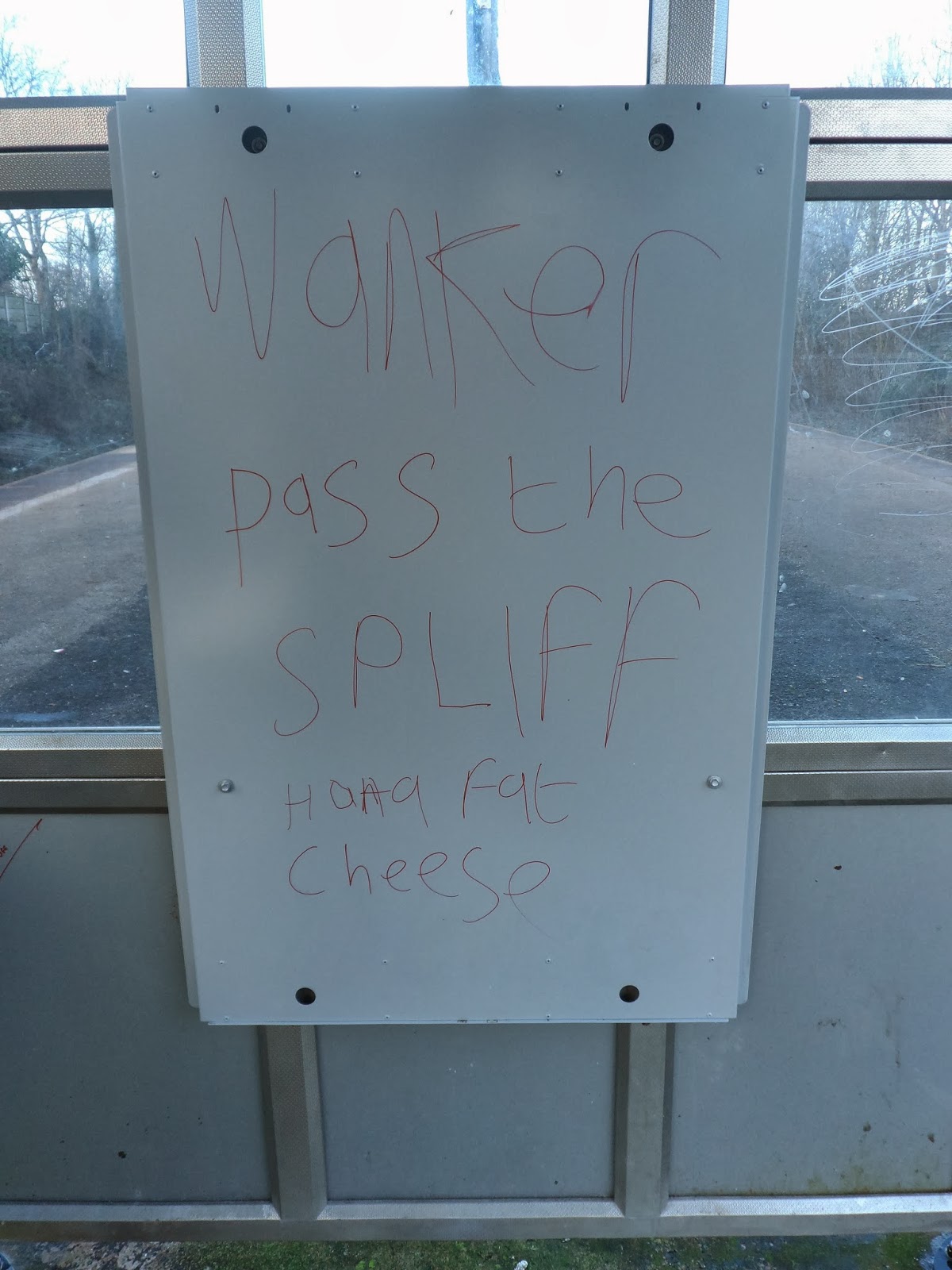 Now, "wanker" I understand.  Same with "pass the spliff", though if you called me a wanker first, I'd be less than keen to share my drugs with you.  But "haha fat cheese"?  No idea.  Is it young person's slang?  Oh dear.  I'm turning into the Dowager Countess from Downton Abbey. 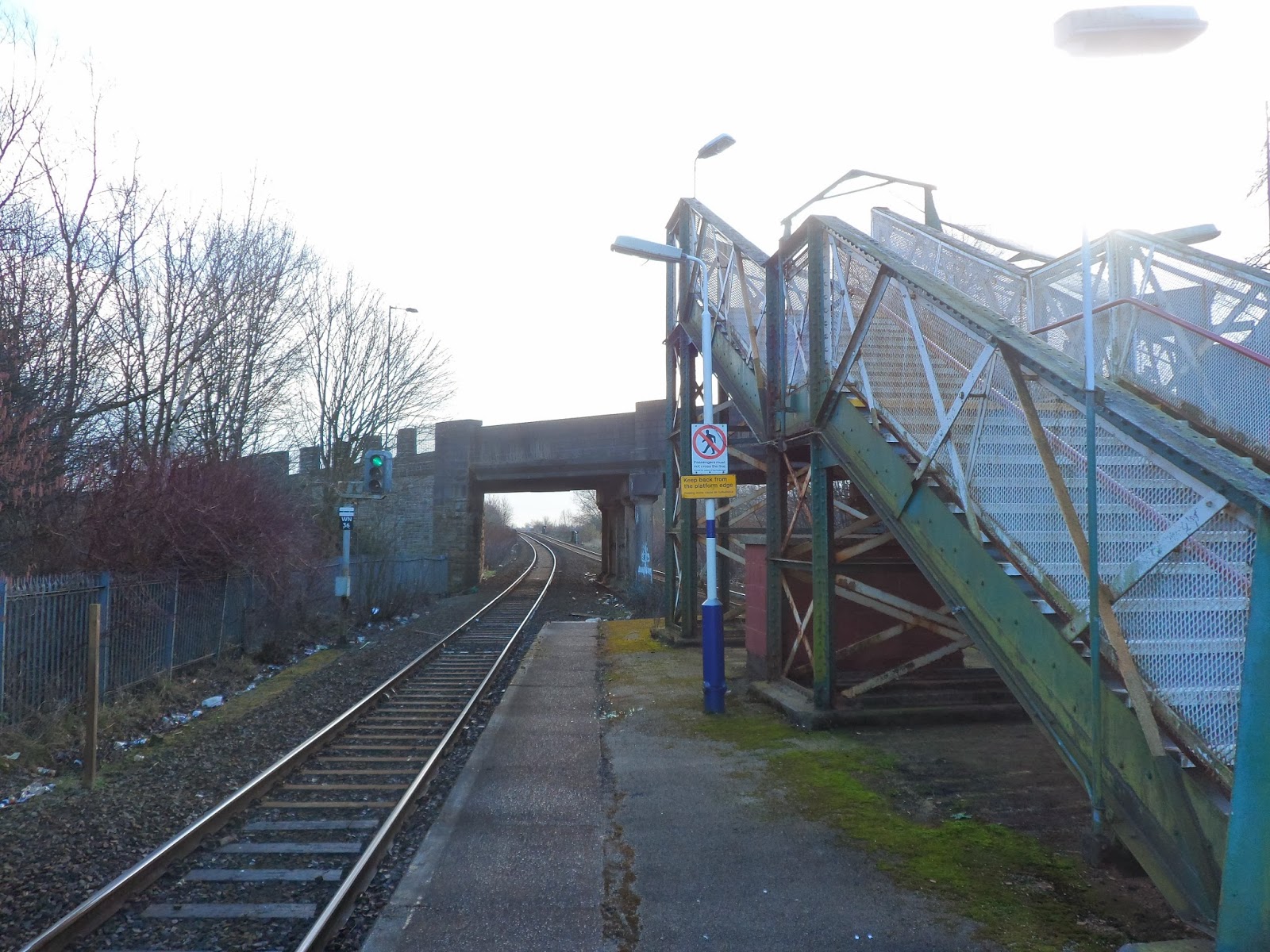 I wrung my hands to get the cold out.  As I waited a few other people joined me, a pensioner, a mum with a toddler, a lady in an extravagant faux-leopardskin coat.  We eyed up the tracks, watching for our train, disappointed every time it turned out to be a non-stopper.  February faces. 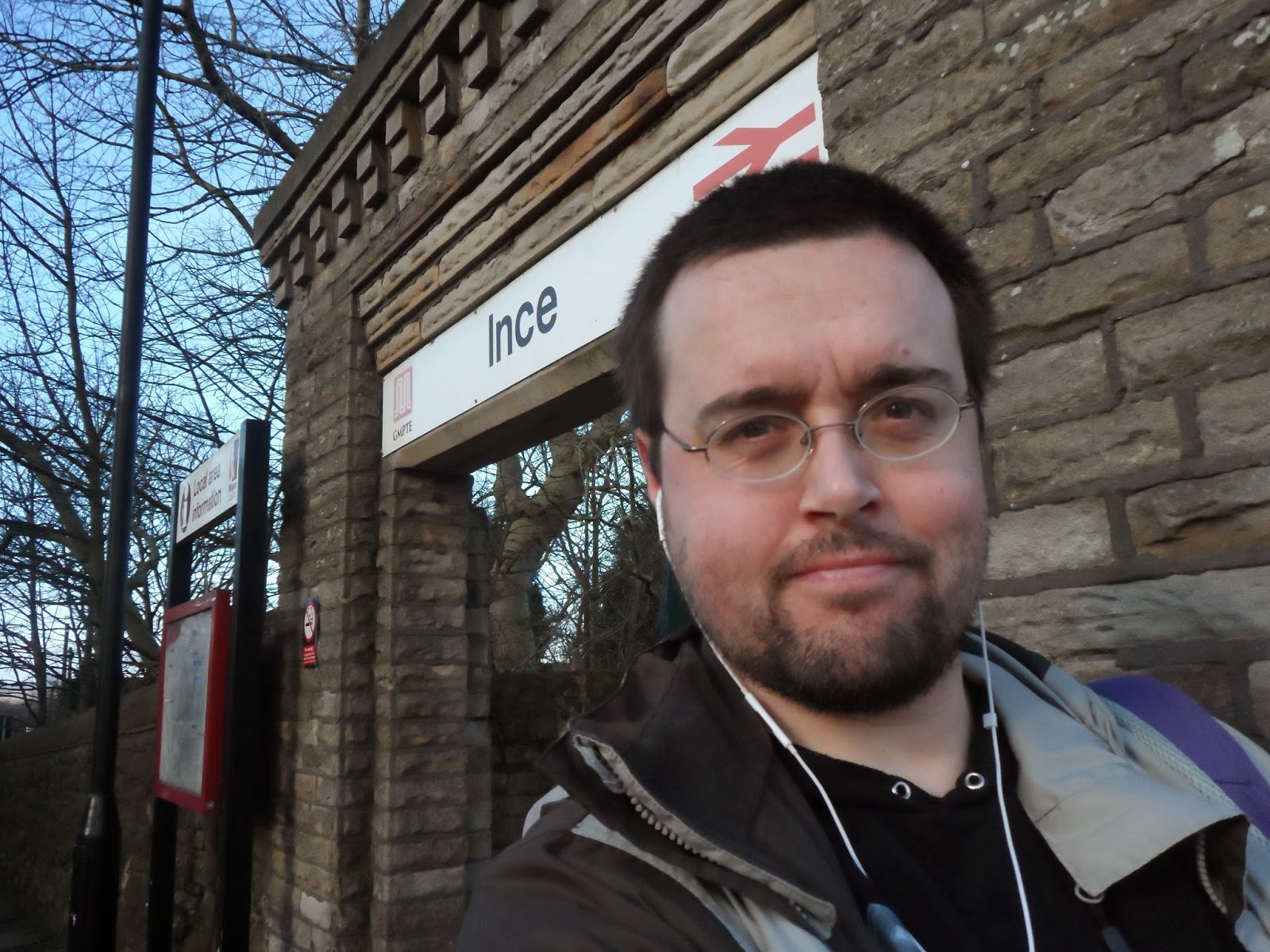 RSH pays cashback into topcashback (which can be converted via Tesco back into RSH vouchers). This is even paid when spending vouchers, which is about 4-5% cashback

I too "lost" 300 RSH points last year but they were free anyway from their Grand Prix game. And I got 1500 points from their Wimbledon game, which going through cashback sites becomes nearly £16 to spend

To solve the street artist's riddle, cheese is a type of cannabis. Apparently it got its name because it is rather smelly.

Thank you for that insight into the underbelly of society, Dan. I have notified the relevant authorities of your IP address and they should be round by lunchtime.

My great grandfather famously (in our family story anyway!) collapsed & died on that station platform.
That one way system is indeed unfathomable to even Incers.