Exciting news in the Merseytart household: I got my TwoTogether railcard through the post.  It was only launched on Monday but I was straight in there with my £30 and my passport-sized photos. 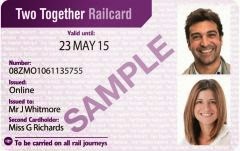 (Obviously I'm not going to put a picture of my real railcard up there, leaving myself open to all sorts of fraud.  What do you take me for?)

In case you missed it, the Two Together Railcard was launched after a trial in the West Midlands as a way of giving pairs of people a cheaper way to travel.  You and another named person are on the card, and if you get the train together, you'll get a third off your travel.  It's really that simple, and is well worth getting with a mate and shoving in a drawer on the off chance.

I got it with the BF, but don't hold your breath for a sudden upswing in the quality on the blog because I've got a pet photographer with me at all times.  For starters, it's not able to be used on most Rangers and Rovers, my ticket of choice for a day romping around the provinces.  Secondly, the BF isn't particularly enthused by the idea of walking between stations.  He's not big on walking.  He's not big on stations either.  In fact, probably the only thing that would persuade him to come out with me on a tarting trip is if we went to just one station, and there was a tea room right outside, and then we went home again.  So the 1/3 off would be pretty much wasted.

It's there in my wallet if we need it though, like my Oyster card and the Bite card that gives me 20% off at station food outlets and I always forget to use.  One card that might be added to it in the not-awfully distant future is the Walrus card.  You might have forgotten about the Walrus.  Launched in 2011, this was going to be the smart ticket for all of Merseytravel, our version of the Oyster card.  All the season tickets would be on the smartcard by 2012, with pay as you go use in place by 2013.

This didn't happen.  In fact, a comprehensive review last year called a halt to the whole project and a re-think of what the Walrus was going to deliver.  They concluded that the timeline was way too ambitious.  Meanwhile, TfGM has announced its "my get me there" card, Nexus have got their "Pop", the Glasgow Subway has a Smartcard - basically Merseytravel has been left behind.

A report to the Merseytravel committee today will suggest a new path forward: the Walrus card is going to replace the Saveaway.  Sort of.  Merseyside's One-Day Travelcard will be available electronically to Wirral passengers from the Autumn, and the rest of Merseyside by next year. 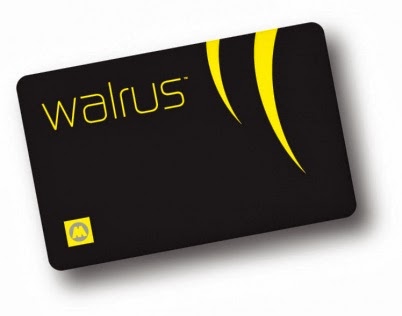 Expert travel analysts and, well, pretty much anyone will notice that this is a bit rubbish.  The Walrus has been demoted from an all-encompassing smartcard scheme to an update of a 1980s scratchcard.  The report notes that the Saveaway has the advantage of anonymity, so there will be none of those pesky customer details to slow things down.  Of course, the pesky customer details are exactly the point.  A weekly Trio customer, or a monthly Solo passenger, wants to be able to renew their card at home, on the internet, in front of The Cube.  It frees up ticket office time.  It frees up personal time.  It frees up the space in your purse that was taken by a big flappy bit of plastic, four times the size of rest of your cards and getting more creased and illegible every time you used it.

Meanwhile, more irregular customers - people like me - want the freedom to chuck £20 on a card as a backup.  I could have that in my wallet for my trips to Liverpool and back, and also have it there in case I fancy getting a bus somewhere, or I change my mind and decide to head to Southport instead of Ormskirk.  A smart card gives you freedom, opens up new journeys, and lets computers do all the hard work of topping up and checking.  Plus - and I realise this will displease Julian Assange - all that customer detail is a fantastic resource for the transport executive and passenger alike.  I can't be the only one who's logged into his Oyster card just to get a weird thrill out of seeing I've been tracked all over the capital.  (It'll also help to discourage extra-marital affairs for exactly the same reason).

I can buy a Saveaway and go out for the day right now.  I did it last week.  It was easy.  It makes no difference to me if it's paper or electronic; I still have to go up to a ticket office on the day and hand over some cash.  And remember, you can't buy Saveaways on buses, so even though I'll have a Walrus card in my wallet, unless I've been to a shop or railway station first to put money on it, it may as well be my membership of the Dennis the Menace Fan Club for all the use it will be.

It's a sop.  It's a "will this do?".  It's a fig leaf, to cover up the fact that it's been two and a half years and nothing's really happened.  If Merseytravel couldn't - can't - handle it on their own, then they should just go over to Manchester and ask to borrow the get me there card for Liverpool.  In fact, if they did that, joining the two cities with one card, it'd be a lot more convenient for everyone.  It'd certainly be less pressure on my wallet's stitching.