Confessions of a Teenage Fare Dodger

Northern Rail has launched a new campaign, one with hashtags and videos and everything else you need to be modern! and successful! in 2014.  It's called #getaticket, and deals with the somewhat controversial idea that if you want to ride on a train, you should get a ticket.

I should confess that there was a time when I didn't always buy a ticket.  I know; I disgust myself.  It was one stop on the train from Leagrave station (where I lived) to Luton (where all the shops were), and it took about three minutes.  For a hard up teenager, this was a quick and easy way to save myself a couple of quid.  Yes, for some people their adolescent rebellion is drink, drugs, and bacchanalian excess; for me it was getting a free train ride.

That was twenty years ago.  I've changed now.  Matured.  And I always, always buy a ticket.  If I don't have one - because there's no ticket office or machine at the station - I become anxious and sweaty.  I practically pounce on the conductor.

It means I also whip myself up into a frenzy of self-righteous fury if I realise people are getting away without paying.  It's just rude.  As the #getaticket website says, you're taking something without paying for it.  There's really no excuse. 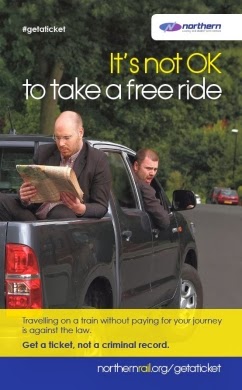 I do have a small complaint though.  Conductors on the trains can sometimes be a bit... elusive.  On my last journey out, he didn't pop up until we were practically into Sheffield.  Saying "it's your responsibility to buy a ticket" is all well and good, but they often barricade themselves in the rear cab and you only see them when they operate the doors.  Ticket checks between every station would be a great help.

I'd also like to see Penalty Fares rolled out where there's a ticket machine or office.  I've been on trains out of Lime Street where passengers have bought a ticket from the on-board conductor.  Just to get to the platform they'd have had to walk past machines, ticket windows and a Travel Centre.  The conductor turns up, and suddenly they've got a fiver out to pay.  You know, and I know, that they had no intention of buying a ticket unless they got caught.  But the conductor simply sells them a ticket and moves on.

There's no excuse for that.  If you board at a manned station, you should have a ticket.  End of story.  Merseyrail introduced a penalty fare scheme, and has run it pretty successfully; it helps that all of their stations are staffed so it's hard to argue that you couldn't get a ticket.  Northern could implement a similar scheme - if you boarded a train at Leeds or Sheffield or Preston and you don't have a ticket, it's because you went out of your way not to buy one.  End of story.


(I've just realised that the the hitch hiker in the first video is getting a lift off the food thief in the second video.  Who is stealing food off the hitch hiker.  Which implies this is less a tale of people trying to get something for nothing and more like a war of attrition between two vengeance obsessed maniacs.  Perhaps.)

That was all a bit self-righteous and petty, wasn't it?  Sorry.  Mind you, if you thought that was bad,  you should hear me on the subject of feet on seats...
Posted by Scott Willison at 18:41

The one and only time I dodged the fare was on my way home from school 3 or 4 years ago. The ticket office at Waterloo was unexpectedly closed with the standard "pay at your destination" notice scrawled on the shutters, so I boarded the train with no ticket. I spent the whole journey with a mini bout of diarrhoea at the thought of a Revenue Protection Inspector boarding.

When I got to St Michaels, I briefly considered going to the ticket office to pay, but actually just walked out, feeling smug at saving a couple of quid. Even thinking about it now makes me feel a bit guilty, but Merseyrail have had more than enough revenue from me since then, I think.

I remember on another occasion going to my school's playing fields at Hall Road for a games lesson, which involved riding the train a couple of stops. Loads of my classmates made the trip and were disappointed to discover a member of Merseyrail staff at the station exit. I had a ticket, but the rest of them had to queue up to pay the bloke. Curiously enough, he didn't issue any ticket or receipt, but I'm sure he went back to his office and meticulously accounted to the railway company for all the money he collected.

Northern are reportedly becoming very aggressive with people who have no tickets. They don't have a penalty fares scheme, but are threatening court action much more regularly than in the past. Which is fair enough, but with so many stations unstaffed and the conductor often unable to collect fares, they are risking bad PR if someone with the ability to kick up a fuss in the media gets fined.

One frequent complaint I've seen is that the Chip+PIN machines used by Northern conductors frequently reject certain banks' cards, so if you're not carrying enough cash it is simply impossible to pay.

I was up north at Christmas and did also notice there a batch of people who had clearly all walked past the open ticket office and "paid" the conductor. I'll be nice and assume they were giving him something to do...

I'm pretty sure I have always paid my fare, although I do recall getting to Picaddilly once about 15 years ago or something - First North Western era probably. There were "ticket inspectors" at the end of the platform - bit of a joke as they were all wearing Securicor jackets or something. Anyway, I didn't really notice - I was just in a rush and was the first off the train. There wasn't normally people checking tickets so I just thought they were people hanging around the platforms.

So I walked straight past them all. No one batted an eyelid.

I had a valid ticket. But not one person challenged me. Made me wonder what the point of them was...

Just remembered the time I got a Permit to Travel on Southeastern (no ticket office at all.) Even though I had a valid permit, I was sweating cobbs on that one!

There's a definite split between people who panic at the thought of being without a ticket and people who could not give a monkeys. I think it's called the difference between "decent, normal human beings" and "scumbags". Lime Street has a similar group of ticket inspectors at the exit; when I got back from Sheffield I'd already thrown my ticket away in the train bin without thinking (because I'm nice and I like to tidy my seat away after me). I was panicking as I walked towards the barrier but I just swanned through without even a pretence of a ticket.

Speaking of Merseyrail, you say "it helps that all of their stations are staffed", but stations south of Hooton bar Chester and Ellesmere Port are unstaffed. Ellesmere Port is only part-time staffed too. Of course, they all have a ticket machine or two as well, so no excuse really.

One particular problem with ticket buying with Northern is if you're travelling from unstaffed station to another unstaffed station, neither with ticket machines and the conductor doesn't turn up. If you're honest enough to try and find the conductor to ask for a ticket, sometimes there's not enough room to move down the carriage to get to them (a particular problem on the Mid-Cheshire line's famous Sardine Express lately which has left passengers behind due to lack of space before). Unstaffed to staffed, Northern suggest getting a ticket at destination. But then, unless there's ticket gates or staff blocking the exit, is anyone really going to buy one? No, they're too busy trying to rush to work after the train was delayed.

What's the solution? In a magical world, it would be ticket machines *on* trains or, even better, systems similar to the Oyster card where you touch in and out and get charged appropriately. Unfortunately, individual local authorities don't like each other so any systems like that will be limited to certain areas (Mersey Travel's "Walrus" and G̶M̶P̶T̶E̶ TFGM's "Get Me There" won't be interoperable I can tell you that!)

Hmm. The idea is to collect the correct fares? Does it matter whether I queue to pay (ticket offices vary in efficiency and what the person in front is asking for, and you can never be sure the machine will work till it does) or pay on board? I like that I can dash on board at the last minute and pay a real human being in comfort. Speculating about people's motives is the sort of thing that got Robespierre in more and more trouble... at the outset his suspicions were mostly spot on (don't look too hard at robespierre's motives, though), but then self-righteousness got all out of hand. As it always does. Ian