In a recent blog post, Robert referred to our friendship as "the greatest double act since PJ and Duncan".  I don't necessarily have a problem with this reference; Let's Get Ready to Rhumble is obviously a high water mark for Western civilisation (the "h" in Rhumble deserves a Grammy all of its own).  My objection was that he didn't say who was who.  Am I Ant, the taller, balder one?  Or Dec, the shorter, fatter one?  I can't actually decide which one's better.  It's not like Morecambe and Wise, where one is clearly a genius and the other one is good but not that good (by the way, the genius was Eric, and if you think otherwise, please leave this website immediately).  In the end, I think I'd prefer to be PJ, as his blinding at the paintball game was a significant moment in children's television for my generation, up there with Zammo slumped on the floor of a toilet high on scag and Five Star being asked why they were "so fucking shit" on Going Live.

I had the opportunity to ask Robert who was the Ant and who was the Dec on Saturday, when we took a train to Manchester together.  He said he didn't have a specific role for either of us in mind, which is probably a lie, and so for the rest of this blog I will refer to him as "Tennille", which makes me "The Captain."  Equilibrium is restored. 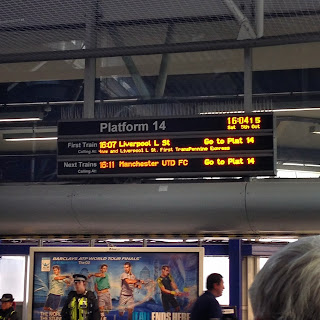 We were in Manchester to visit a rarely open station: Manchester United Football Ground.  Or, as the BF (a former Liverpool season ticket holder) calls it, "that shithole".  He wasn't at all keen on me visiting the station, perhaps believing I'd come home with Manchester Fleas or something.  I pacified him by explaining that the trains weren't actually being run for a football match: it was the Rugby Super League Final that afternoon, between Wigan and Warrington.

And that is the end of my knowledge of the subject of rugby, unless you count Ben Cohen's arms and an appreciation of the annual Dieux de Stade calendar.  I went to the least athletic high school in the world - my year couldn't scrape together eleven boys willing to play football against other schools, so we just didn't have a team that year - and rugby was only on the curriculum for one year.  There was a Science teacher who apparently had a minor in rugby and who taught us the basics on a freezing cold field in November.  Then he left the school, and I went back to being a really distant fielder in rounders so I could have a nice sit down.

Manchester United Football Ground is tucked away behind the South Stand, and only receives limited services on match days.  It's a hangover from the days when there actually used to be "football specials", four carriages of drunken violence and hooliganism that crossed the nation ferrying louts to the next match.

I've read Awaydays; I know that trains to football stadiums are full of bovver booted maniacs pulling up the seating and spitting on passers by.  I began to get more and more anxious.  It had started earlier, when I tried to find a neutral outfit that wouldn't imply allegiance to either team, and now it was growing.  What if someone asked us who we were there to see?  Or a more technical question?  What if they started a singalong, and took issue with me not joining in?  What if we were the only sober people on board?  I don't like crowds at the best of times, but things are so much worse when you're jammed in the armpit of a twenty stone rugby fan who's been knocking back the Tennant's Extra since 8 that morning. 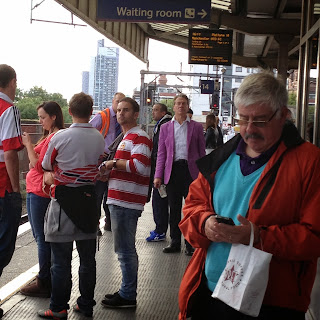 Adding to my anxiety was Michael Portillo on the platform, looking supercilious in a bright pink jacket (nice way to battle those rumours about your sexuality, Mike).  In my experience, where a Tory politician goes, disaster is sure to follow.  It didn't help that, purely coincidentally, Robert Tennille had actually mentioned Portillo in conversation moments before, raising the very real prospect that he is a minion of Satan who can be summoned just by uttering his name.  Like the Candyman.

If I'd had more wits about me, I might have gone over and demanded that he stop making that Great Railway Journeys programme.  The concept of the programme is fine, it's just his halting, uncomfortable presence as a presenter I can't stand.  The sight of him in a hairnet, attempting banter with some jolly production line worker as they turn out some historic Devon fudge, then pretending to eat it on the Tarka Line, turns my stomach.  Probably because I suspect that his Damascene conversion to liberalism is all a front, and if David Cameron offered him a front bench role which involved herding the first born of welfare claimants into a large pen and dropping them off Beachy Head he'd be right in there.

We finally made it on board the train, which wasn't too busy; we got a seat, at least.  Most of the matchgoers got on at Oxford Road.  A hefty Wigan fan, Carlsberg in hand, installed his two kids in the seat in front of us and then bellowed down the carriage for the rest of the journey.  Much of what he said was either boorish or incomprehensible; apparently he didn't mind if Wigan lost, so long as one of the Warrington players got his leg broken, which doesn't strike me as being a good sport. 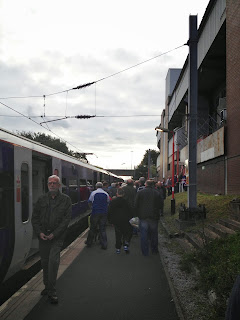 The station is on a little bit of side track alongside the main line, which is why it has to have special trains and they can't just let the mainline ones stop here.  TfGM have suggested closing this station and building a new one nearby which could be served by regular services and be more of an asset for the local community.  Their proposed name for this station is "White City", after a nearby retail park, which needs to be stopped for being unoriginal.  There's already a White City station, Manchester, and has been for over fifty years.  Get your own name.

We let everyone else alight from the train then found a handy sign for our photos. 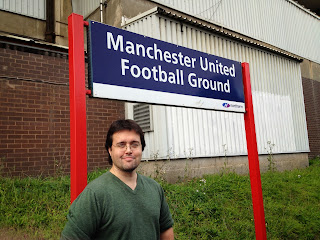 That's another rarity knocked off the map.  The rest should be dead easy.

Now we had the problem of getting out of the station.  The crowds had thinned, as passengers had passed through the turnstiles.  Turnstiles.  I worried that as we didn't have match tickets we wouldn't be allowed to go through, and we'd be stuck on the platform until the reverse services started up after the match. 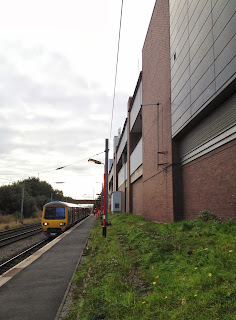 Luckily the turnstiles were a relic of the old stadium, and were unmanned.  We passed through and emerged in the shadow of Old Trafford, its high glass frontage and bright red signage everywhere.  Even though it was a Super League final, they hadn't really bothered covering up its footballing day job; I thought there might be some banners or signs to celebrate the rugby match but there were still vast portraits of Wayne Rooney everywhere you looked. 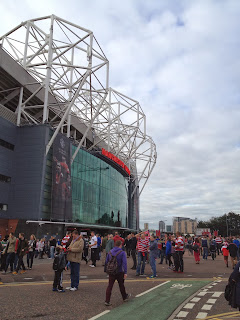 I texted that picture to the BF, with a message saying "Look where I am!"

"Does it stink of shit?" came the extremely mature reply.  Football can turn grown men into 13 year old boys.

Now we had to get away from the station, which was difficult, because we were going in the opposite direction to everyone else.  Waves of fans were streaming closer, good natured enough, but still a hefty mass.  We dived down a side street and found ourselves in what seemed like a perfectly ordinary suburban avenue.  It would probably be quite nice living here, I thought, apart from the absolute hell of every other Saturday. 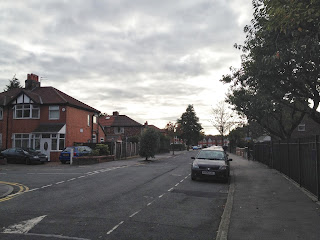 As though to emphasise the point, two women emerged from a patch of vacant ground, hoisting their knickers up.  "There'll have been loos in the ground," said their friends, waiting politely on the pavement.

"I know," said one of the al fresco pissers, "but I just couldn't hold it in any more!" 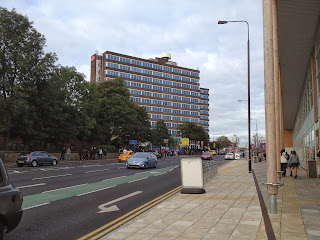 We were headed for Trafford Park station for the train home.  We'd considered staying in Manchester, but on top of the Super League final, Manchester City were playing Everton at home, so we decided the city would probably be nightmarish.  We were also trying to time our return visit so we wouldn't get Everton fans on the train, or Crystal Palace fans at Lime Street, or Liverpool fans in the city's pubs; Saturday afternoons are a minefield if you can't stand sport. 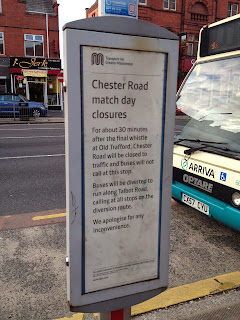 Chester Road's a big, busy thoroughfare here, so I was fascinated by the idea that they'd close it on match days.  I should imagine the inconvenience to traffic is worth it to get 60,000 people out of the way as quickly as possible.

There were still signs that a big event was happening.  Crowds of supporters passed us, dressed in their teams' strip (I still didn't know which one was which, and the presence of away kits just muddied the issue).  Outside a social club, the car park was crammed with people clutching plastic glasses of beer, and at the kerbside men in high-vis jackets beckoned passing cars into private compounds behind hotels and pubs.  They lazily rolled their arms, over and over, like really bad interpretative dance. 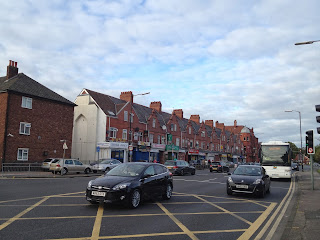 Meanwhile, there weren't so much shopping precincts, as strips of grease.  Chippies, kebab shops, Indians, Chinese - every kind of takeaway was here to ensnare the passing fan with tempting wafts of fried food.

Down a side street, we got another sign of the horrors of being a local resident: parking permit signs with dot matrix indicators to tell you when the next match was. 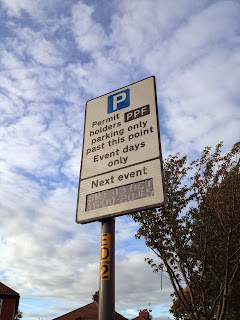 I quite liked that.  I always find it thrillingly futuristic, a little bit of Blade Runner come to the present day.  I get similarly excited by LED screens showing ads; if that one outside Lime Street ever featured a massive Japanese lady putting a pill in her mouth I'd be ecstatic.

Tennille was at my elbow, complaining, doubting my navigational skills.  It was not a little triumph that I pointed at Trafford Park station on the horizon; of course I knew where we were going. 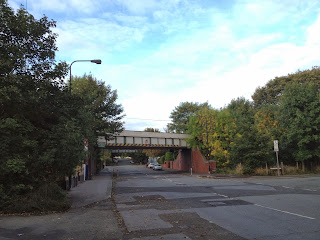 It was a sad little station.  A ticket office had been constructed when it first opened at the turn of the 20th Century, but it had been closed a long time ago.  For a while it was a taxi office, but now it seemed to be abandoned altogether.  The windows were boarded up and iron bars were over that. 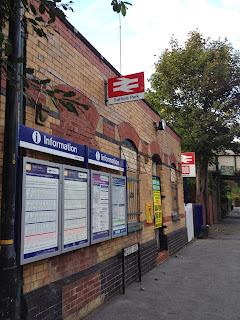 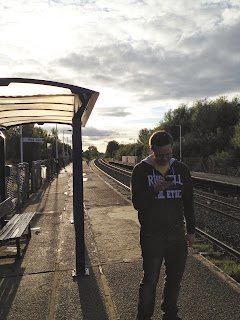 Tennille hammered away at his phone - he's just got an iPhone 5C, and needed no excuse to bash at it - while we waited for the train home.  The rest of the line could wait for a quieter day, some time when I wouldn't have to run the gauntlet of burly men in shorts.  Back to Liverpool we went, for a pint or two. 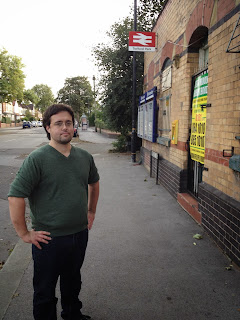 You can read Robert's account of the trip here.
Posted by Scott Willison at 13:39

Well done, I thought this would be one of the more difficult ones to tick off but other than tracking down the right times it sounds pretty simple!