It's funny: it took me absolutely ages to write about my trip along the Esk Valley, but I forgot to mention an extremely significant fact.  Namely, that at some point during that trip, I passed the 50% point of my quest.

There are 531 stations on the Northern Rail map, and during my trip I visited numbers 265 and 266, pushing me over the line.  I'm not boring enough to work out exactly what were the stations that straddled the halfway line, so I'm picking Redcar British Steel as the one that pushed me over the edge, purely for its rarity.

Now admittedly, a hefty part of that was done during the round the merseyrail we go era.  Basically most of the left hand side of the map is also on the Merseyrail map, so I was able to count those stations before I even started.  That was 84 stations I'd crossed off without too much hassle.  But it's still a fair old achievement.

I'm getting through the map a lot quicker than I did on the Merseyrail map because of the distances I have to travel.  I was happy to for one trip to cover one or two stations; it didn't really matter.  If I had an afternoon with nothing to do, I could trot out to Aigburth or Widnes or something, and be home for dinner.  Now that I'm travelling across the country, it would seem perverse to only get a couple of stations.  To get my money's worth out of those expensive tickets I really need to make each journey count, so there are four, five, six stations to visit every time.  I'm ticking off whole branch lines in one go.  I've become a tarting demon.

There's still an awful lot untouched though.  The east of Cumbria is a blank area, with the famous Settle-Carlisle line completely uncollected.  Similarly, the Grimsby line is uncollected, and there's a lot of stretches of line in Yorkshire that I haven't even passed through.  There are loads of stations around Newcastle, and the bottom of the map is also virgin territory.  Manchester seems to be the blogging equivalent of the Augean Stables; no matter how many stations I collect, there seem to be dozens more.  The Hadrian's Wall line is half-finished; same for the totally not-funny Penistone line.

In other words, there's still a good couple of years' worth of blogging ahead of me.  And then I move onto my new project: round the new york subway we go.  I just need someone to pay for me to live in Manhattan for five years or so, but I'm sure that won't be a problem.

Below is the map as it currently stands for me; the highlighted stations have been collected. 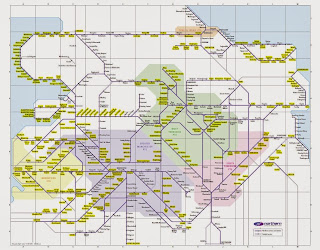 I used a Northern Rail Ranger last week to travel from Crewe to Newcastle via Manchester, Leeds, Settle and Carlisle, so I can safely say that I definitely recommend the Settle-Carlisle line. You may have trouble ticking off multiple stations though due to the infrequent services and the distances between stops (unless you're really really fond of walking for miles).

I'll keep spoilers to a minimum, but the stations are all in really good nick, with many volunteers keeping everything shiny and even providing a catering trolley on the train (the only one on Northern Rail probably).

Which one do you think will be your Liverpool Central (i.e. the one you leave till the very last?). It was Central wasn't it?!

I don't have an end point in mind as yet. The fact that I haven't collected Piccadilly makes me wonder if I should do a final tour of the Manchester stations, as I did with Liverpool, but that's not really that thrilling. Victoria-tram to GMEX-train from Deansgate to Oxford Road - walk to Piccadilly for the last train... it's not leaping out at me.

I was thinking of making the Settle-Carlisle my next Epic Journey With Little Purpose, so that I'd have plenty of time to visit the stations and not have to wander 20 miles across moors...

A big task, but how about indexing your posts into categories, so all the posts for one line are accessible in one click? That should keep you busy when you're done!