The minute I was nominated for a Blog North award, my thoughts turned to my outfit.  It was clear that such a magnificent occasion demanded an equally magnificent costume, and so I deferred to my personal couturier.  We eventually went with something that combined all the best awards outfits of the past.  Inspired by Lady Gaga's meat dress, I wore a hat made of bacon; my torso was covered by a single piece of spandex and mesh netting, a la Cher; and my legs were encased in feather trousers, as an homage to Bjork's swan dress.  I felt that this was a dignified and tasteful way to make my entrance. 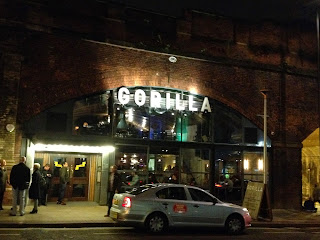 I arrived at the venue for the night's glittering festivities and was immediately confused.  Where was the red carpet?  Where were the paparazzi?  Why wasn't there a camera crew from E!?  I'd had my nails done specially, just in case I was accosted by Giuliana Rancic and forced to put my fingers in the Mani Cam.  This all seemed rather low key.  I was disappointed; not as disappointed as when I was laughed out of William Hill for trying to get the odds on my victory, but close.

I made my way through a packed bar to the rear of the venue, ostentatiously holding my ticket aloft and waiting for a member of hospitality to whisk me to my reserved seat.  For preference, I would go for something a couple of rows back; front row is only for legends - Streep, Nicholson, Spielberg - a seat in the third row would imply dignity and humility.  The man on the door took my ticket and stamped my hand then waved me through. 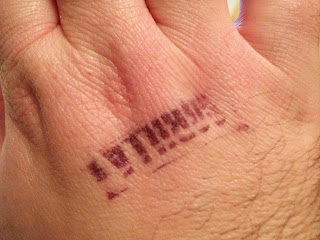 I stared at the stamp, uncomprehending.  Would you stamp Jennifer Lawrence's hand?  Julia's?  Denzil's?  Any of the Toms'?  No, you would not; their legendary face is their hand stamp, and I thought that the ample coverage my fizzog gets on this blog would be enough.  Apparently not.  Still, what do you expect from a venue that can't even find an apostrophe? 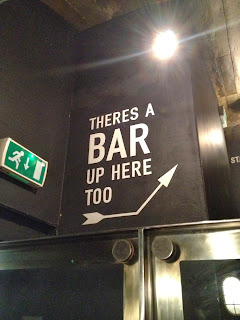 Sashaying through to the awards space, I was pleased to see a stage and rows of chairs.  The presence of a synthesizer cheered me immensely; perhaps there would be a musical interlude after all.  Maybe a dance interpretation of the leading blogs by the Cirque de Soleil.  I was sure that the absence of a "Best Song" category wouldn't hold things back.

There was a brief introduction by one of the organisers, who was American; this added a further sheen of glamour to the occasion, and provoked a noticeable frisson throughout the audience, like when a proper Hollywood star turns up at the BAFTAs.  My fellow attendees didn't seem to have gone to the same effort, clothes wise; I assumed they were playing things low-key.  They were saving their best outfits for the Vanity Fair party afterwards.

Some bloggers came out and read pieces to us, which confused me, as I didn't seem to have been invited to do the same.  I assumed that they didn't want the entire evening overshadowed.  Particularly good was Thom Robinson, from Thom Writes About Love Songs; his dry wit and Sheffield accent brought to mind Jarvis Cocker, to the extent that I worried he was about to moon some schoolchildren. 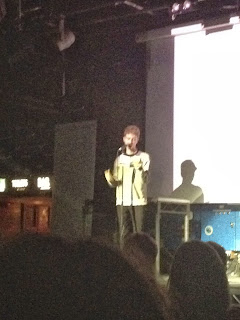 There was a short break, in the course of which I located the bar, and then we discovered the real reason for that synthesizer; a performance by Les Malheureux.  Instead of breaking into a medley orchestrated by Mr Bill Conti they performed funny, quick stories with a rhythmic background and slides.  All well and good, I thought, and I was undoubtedly entertained, but it wasn't exactly Adele belting out Skyfall was it? 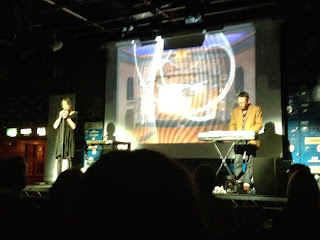 My bacon hat was starting to drip.

Chris Killen came on then, wearing a suit made from tinfoil; finally, I thought, someone who has embraced the majesty of the occasion and dressed accordingly.  His piece was called A Short Guide to the Future.  It was sometimes funny, sometimes frightening, and made you think darkly about things to come, a bit like James Franco and Anne Hathaway hosting the Oscars.

Another break, where I found the bar again, and then it was onto the real meat of the evening: the awards.  I crossed my legs demurely, and placed my hands in my lap for that "starlet just excited to be here" look.  I assumed my blandest grin and politely applauded the nominees in other categories that weren't as interesting as mine.  Finally, it was time for the award for Best Personal Blog.

The nominees were announced, along with a screenshot of the blog in question.  Mark Provins.  Wife after Death.  Cassandra Parkin.  Round The North We Go.  Chocolate Sandwich.

The presenter, a very neat looking young man from a web hosting company, announced the runner up.  I wasn't really paying attention because (a) I was silently cursing that Ronald McDonald picture on my last post, because it made the blog look really tacky onscreen and (b) who cares about runner up?  First loser, more like.

I smiled benevolently.  I carried on smiling when Wife After Death was announced as winner, and she leapt up and down excitedly with all her friends like those schoolgirls getting the parts of pilgrims in Addams Family Values.  I carried on smiling when the host broke in to say that the judge's decision was "unanimous", even though I considered that to just be rubbing my face in it. 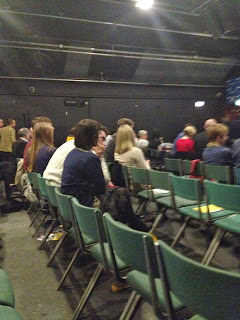 I applauded the winner, thinking stoically of poor Amy Adams, who's done the same thing at four separate Oscar ceremonies now.  I reminded myself that Hitchcock never got a competitive Oscar, or Cary Grant, or Richard Burton.  I certainly didn't leap to my feet and scream "FIX!", though I have had interest from the people who made that film about the 9/11 conspiracy; they seem to think that there's a nefarious scheme at work here, and who am I to argue with such reasonable sounding gentlemen?

The rest of the evening continued with some more awards I didn't really care about, though I was annoyed that Thom Robinson didn't win his category (yet further proof that the Blog North awards are controlled by the Illuminati.  Or so I'm told.  I couldn't possibly comment).

Still, runner up (or "biggest loser") isn't bad, I suppose.   And it was genuinely a thrill just to be nominated.  Also, it turns out there wasn't an actual trophy, so I haven't missed out on a new paperweight after all.

I made for the Sainsbury's over the road and purchased a frankly obscene amount of alcohol.  Then I went home and made a fry up out of my hat.
Posted by Scott Willison at 16:39

Been reading the blog for sometime now and enjoy it.

May I suggest you consider "Round the DART we go" at a future date! In fact the DART stations in Dublin would be fairly easy to tick off.

Dun Laoghaire would be a good start as the station is just across the road from the ferry terminal - mind you these days the ferry (Stena HSS from Holyhead) only operates in the Summer and Christmas/New Year.

Runner-up is so much classier than winner. Hope you had a gracious expression on for the benefit of the paps. Off now to check out Wife After Death (sounds a bit like uxorious necrophilia to me....)

I have, in fact, idly surfed the DART website planning how I'd collect the stations. I've never been to Dublin, and I'd love to go, plus there's the LUAS trams as well. I even looked at combining it with doing the Dublin-Belfast railway line, as a massive big holiday type thing. The expense, plus Ireland's continual deferral of a nice sexy Metro system for Dublin, put me off.

Still, there are direct Liverpool-Dublin ferries... But only Ryanair flies there from Liverpool airport, and I refuse to give them my money.

Also, thank you for the compliments about being FIRST LOSER.

Eeek! Wife After Death is about a widow facing up to her changed world. Flippant comment duly withdrawn. (embarrassed emoticon).

Runner up gives you something to aim for!

I did my best for ya mate, thanks to dynamic ip's. Congratulations on achieving what you did :-)

Well done with the Guardian piece mate; Look forward to your next update.
Cheers,
The Yorkshire Reaper..