Bored with my Berlin trip?  Tough!  Here's another post about it to go with this one and this one.  I'll get back to Merseyrail eventually, I promise.


New can be old; futures can be built on the past.  Gleaming temples to modernity often have ancient foundations. 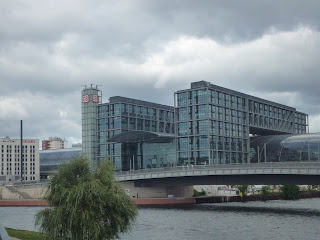 Berlin Hauptbahnhof (Main Station) is a glass and steel palace of the railways.  It rises up out of wasteland to shine at the city, with its view of the Spree and the new Government District.  But it's actually constructed on the site of a much older station, the Lehrter Bahnhof.

140 years ago, the Lehrter Bahnhof opened to accommodate east-west trains in the city.  Soon after, an S-Bahn station was added to the mix, and things carried on quite happily for seventy years or so.  During the war, however, the bombing destroyed much of the building, and what wasn't bombed was then shelled by the Russians, until the whole station (except for the suburban lines) was demolished in the 1950s.  Lehrter Bahnhof then slipped even further into obscurity with the division of the city.  It was right at the edge of the Western Sector, the last stop before East Berlin, so when the Wall came up it became largely surplus to requirements.  Who'd want to go there?

Thankfully, the Wall came down, and the German government looked at how it could rebuild the city and its transport network.  They finally settled on a brand new North/South line which would interchange with the current East/West lines, and, well, there's this big bit of vacant land where a station used to be going begging...

The Hauptbahnhof was born, a confection of shiny 21st century steelwork on top of its 19th century foundations. 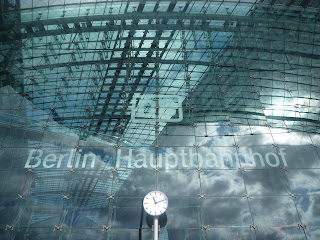 I'd read about the Hauptbahnhof, of course, and eyed it lustfully.  It belonged to that new generation of European train stations springing up across the continent, places like St Pancras International and Lyon, new railway buildings that harked back to the glory days of travel.  This new phase of construction placed the passengers and the tracks at the front and centre of the building.  Whereas once, in places like Euston, the tracks were squirrelled away like a dirty secret, in the new century high-speed trains have made people proud of the railways again.  Nothing to hide here.

Stepping inside for the first time was a disconcerting experience.  I'd made my way across a building site to get there.  Walking down from the riverside, I'd had to edge past hoardings and diggers, along a makeshift pavement space, to get anywhere near the entrance.  The forecourt was made up of confused looking people holding onto rollie-suitcases, trying to work out the temporary bus stops and taxi ranks.  Then you walk through the door and - calm. 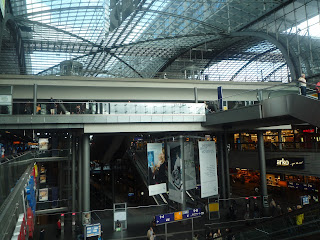 Perhaps calm is the wrong word.  There was still the thrill of a major railway station, the world of passengers swirling purposefully around me.  There was a great void ahead of me, punctured by escalators and lift shafts leading who knows where.  Yet it felt so ordered and unhurried.  There wasn't a rough cacophony of noise from the travellers, just hushed murmurs of conversation swallowed by the vastness of the space.

The Hauptbahnhof has five levels, though only two of them are for trains.  At the very top of the station are the east-west services, plus the S-Bahn.  At the very bottom are the north-south services.  Squeezed in-between are all the services you'd expect from a modern transport terminal, the travel centre, the left luggage, the toilets, plus shops.  Lots and lots and lots of shops.  More shops than you'd know what to do with, to be honest. 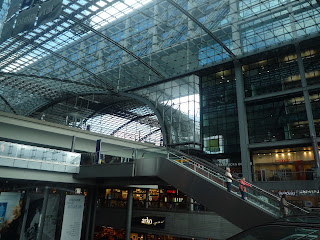 I have no objection to retail provision in a station.  WH Smith's was founded on the principle of taking advantage of passenger boredom while they waited for a train.  Bookstores, food outlets, coffee shops - I can understand all that.  Clothes shops, though?  A Virgin Megastore?  An O2 shop?  Who says, "Ah, I've got ten minutes till my train leaves - I'll get a new mobile." 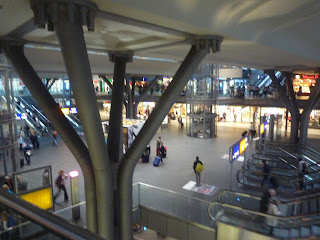 The other item of note was how few actually German companies were on offer.  Finding a McDonalds was no surprise, but there was also a Burger King, a Starbucks, a Cafe Ritazza, an Upper Crust, even a store just called "Fish & Chips".  I'm not sure if this was an acknowledgement of the very international clientele of the Hauptbahnhof, or if it was only multinationals who could afford the rent.  None the less, when I fancied a snack, I headed for Kamps, which might be the German version of Greggs the Bakers for all I know but at least it had a suitably Teutonic name. 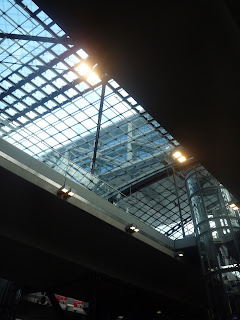 I took the escalators up to the top floor to see the platforms properly.  As I rose up, the sense of space and spectacle was really impressive.  I was passing up into a shiny clear world. 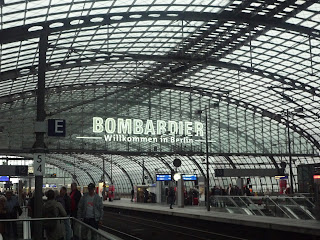 It was new and yet familiar.  For all its glow, this was definitely a train station, not an airport terminal that got lost.  The curved roof was a throwback to the mighty Victorian termini; it shows that some styles are just classic.  While those early roofs were high to allow the smoke from the trains to dissipate safely, here it was simply to make the building open, clear, to give its users room to breathe and enjoy the space.  It was also, let's be honest, a bit of a show off move: the station was rushed to completion before the 2006 World Cup, and you can imagine the impressed faces of the foreign football fans as they stepped off their train into that echoing hall.  Then they probably went to find a pub. 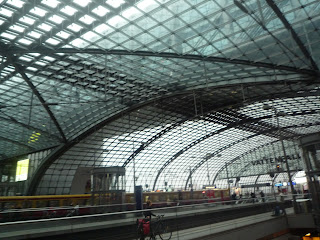 I wandered around, just staring at that beautiful high ceiling.  The roof is also, sadly, symbolic of some of the cuts that hit the station during its construction.  It was meant to extend the full length of the platforms, but in the rush to get the station finished on time, the ends were sliced off; then, in a storm a few months later, some ribs of the roof collapsed and flooded the station.  It's somehow pleasing to know that transportation cock-ups aren't just restricted to the British.

Once you've done the top, you have to go to the bottom, so I took one of the specially constructed oval lifts right down to the ground floor.  Everything was still clean and shiny; no-one had yet peed in the lift, and the console was free of scratches and graffiti. 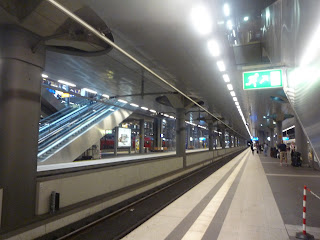 Down in the Untergeschoss was a completely different experience to being up top.  This was, effectively, an underground station, and though there was some daylight leaking through, it very definitely felt like a subterranean world.  And yet it was so large - your brain can't quite take in that they managed to squeeze eight platforms, each long enough to accommodate the longest high-speed train, into a space below ground.  It didn't feel restricted or small.  It was open and closed all at once. 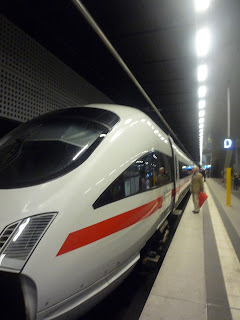 With an admiring glance at the ICE train waiting on the platform, a train that seemed to be going ridiculously fast when it was standing still, I turned and made my way back up the escalators to the concourse level, in the centre of the building. 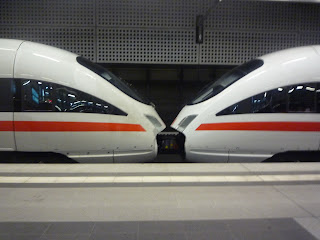 The Hauptbahnhof would be a real boon for lazy trainspotters; you could just position yourself against one of the balconies and watch the trains come in and out without moving an inch.  Not that there'd be a seat for you, because like all modern railway stations, if you want somewhere to sit you can pay €3 for a coffee.  No-one gets a rest for free, mister. 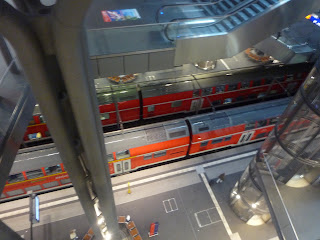 It's a dizzying whirl of a station, all movement and flow.  Yet, like I said, there's no sense of confusion. It's laid out with brilliant simplicity and total confidence.  Even my vertigo-prone brain couldn't help but stare down into the levels, watching the trains move in and out, the flows of people being disgorged and swallowed by each new arrival. 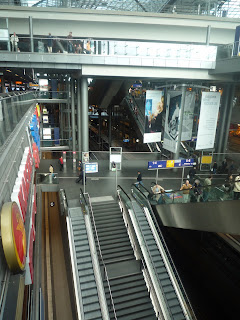 I found a coffee shop so I could sit down and gather my thoughts in my journal.  Beside me was a splendid ogre of a woman and her husband, both of them dressed in over-coloured fashions and neither of them seemingly having smiled since the early Seventies.  They eyed the cafe over their macchiatos with the well-honed eyes of people who've been there, done that, and disliked every single second of it. 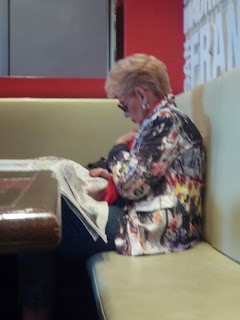 I was overwhelmed.  I knew the Hauptbahnhof would be beautiful; I knew it would be impressive; I knew it would awe-inspiring.  I didn't realise how good it would be.  How well designed and thought through it was.  What a pleasure it was to use.  I'd get a train to Prague from the Hauptbahnhof a couple of days later, and it was a smooth, uncomplicated move, even with a suitcase and an unfamiliar language and a BF who wasn't in the mood to be overwhelmed by the architecture.  Berliners haven't taken the station to heart; it's resulted in the marginalisation of the Zoo and Ostbahnhof stations, the traditional home of railway services, and it cost too much and it fell to pieces and all the other old arguments about anything new which sadly appear to be universal.

I loved it.  I hope Network Rail has sent every single designer, architect and engineer on its staff over to have a look at it. Euston is about to be rebuilt, and this is what we should be aiming for.  An epic, twisting world of trains.  A palace of the railways.
Posted by Scott Willison at 10:32

Have you seen the huge missed opportunity that will happen with the redevelopment of New Street station?

It's too much to hope Euston is going to look like this!! amazing, more Berlin Scott :-)

The new-look New Street is very disappointing, but I can't see that there's much you can do there short of demolishing it and starting again. HS2's going to Moor Street and hopefully that will give New Street a bit of breathing room to allow it to be properly rebuilt. An even better idea is the Grand Central station concept that was floating around - a brand new station for Brum - but that's just a pipe dream.