Honestly, I go away for a week and Merseyrail goes mad.  First of all, the good news: £40 million to upgrade the underground stations, including £20 million just for Liverpool Central.  It's about time, let's be honest: there has been diddling around the edges for years, with the MtoGo and new floors, but Central needs a lot of work.  The Northern Line's island platform is grossly unsuitable, and quite scary on a Saturday afternoon.

We're also going to get a new look ticket hall, with a glass roof and walls.  This will help it to tie in with the under construction Central Village scheme.  There will be a direct link into the station from the new development, so it makes sense to get it done while there's building work all around.  Hopefully they'll build a little roof for the lift access, so disabled people don't have to get rained on every time they come up from the platforms.

The downside is that Central's going to be closed for four months over next summer to accommodate the works.  That's a bit of a nightmare for commuters and shoppers alike, who'll presumably be either made to use Moorfields or who'll wrestle with replacement buses.  Just keep telling yourself: it'll all be worth it in the end.  (Of course, if they built my fantasy station at Chinatown, this wouldn't be such a problem, but unfortunately Merseytravel don't have access to the imaginary worlds in my head). 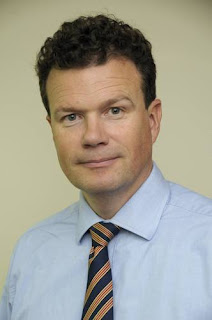 When the Gods give, they also take away, and so we're also going to have to bid farewell to my CLOSE PERSONAL FRIEND Bart Schmeink.  Bart is leaving Merseyrail to go and run GVB, the Amsterdam transport network.  It means that he's going to be around if and when the Noord/Zuid Lijn gets opened in the city, the lucky bugger.

Obviously I'm distressed by this news.  Not only because he's done a damn good job in his four years at the head of Merseyrail.  He's a really nice guy who's embraced Liverpool life and been a part of the city, not just a faceless businessman.  I had the good chance to meet him earlier this year, and he was charming and funny, and not at all scared by my disturbing blog obsession with him and his railway network.  I'd have run a mile, personally.

Bart doesn't leave until the 1st of December, so we've time to have a whip round.  I'm hopeful that his replacement will be another nice Dutchman with a brilliant name.  And that he'll give me a free Railpass.
Posted by Scott Willison at 13:07

The staff of Merseyrail all look up to Bart, mainly because if they didn't they'd be staring at his crotch area and that wouldn't be good.