It wasn't even as though we were talking loudly. We were sat at a table on the train with an elderly man across the aisle, and I turned to Robert and said, "So. Did ******* shag that 18 year old, or what?"

The man's response? He got up and moved to a seat down the other end of the carriage. 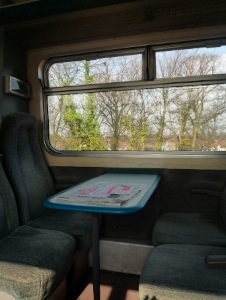 What was worse, Robert didn't even know if our mutual acquaintance did shag the 18 year old or not. I will have to put in some more research.

We were on a train headed for the badlands: Greater Manchester. Robert had a week off work, so we decided to slip in a quick tart. Roy was meant to have joined us, but a better offer meant he had to drop out, so just the two of us were on our way to Bryn.

Somehow I'd managed to miss Bryn out. I'd done the line as far as Garswood in the days when I was trying to stick to Merseyside only (such a long time ago...) and I did the two Wigan stations in one swift go. Bryn had therefore lingered: a single isolated blip that needed to be caught on its own. It seemed like a nice simple target for the day. 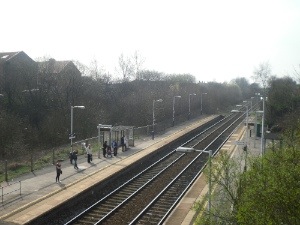 What can I say about Bryn station? It's not very interesting, mainly. It's a "bus stop" station - no ticket office, no staff. Not even a building. Just a couple of platforms and shelters. I wasn't expecting St Pancras International, but the lack of any kind of facility was disappointing. Nice big sign though. 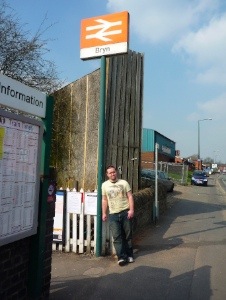 So that was that: station captured. Theoretically we could have just got on the next train back, but where's the fun in that? 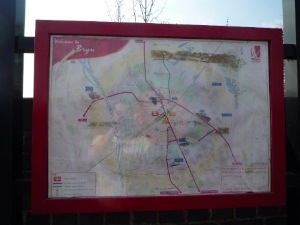 Besides, I'd put in some preparation. My own research into Bryn had thrown up only one pertinent sight - the Three Sisters Recreation Area, so called because it was planted on top of three enormous slag heaps. I don't want to go into the psychological make-up of a person who thought "slag = sisters". It didn't seem too promising, so I contacted Phil, one of the blog's loyal unto death readers, who is originally from Haydock. "Phil," I asked. "Whither Bryn?

"It's an interesting little place," replied Phil, and who am I to argue? Certainly, it had a Bargain Booze PLUS, which sounds impressive. There were some little shops and a road crossing and terraced houses with enormous tellies in the windows - some of the residents must never see daylight - and it all seemed nice enough. However, Phil advised, "You can pass an hour or two in Ashton-in-Makerfield town centre," so that seemed like a better bet. My own research - i.e. Wikipedia - also informed me that:

which was all the incentive I needed. The Hinge Capital of the Northwest? Yes please! 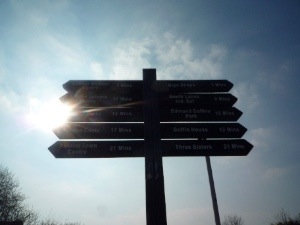 We strolled down the A49 into Ashton-in-Makerfield, enjoying the warm spring sunshine. We especially enjoyed the shirtless men playing football in Jubilee Park: it's a wonderful sign of the advance of nature when you catch your first glimpse of male nipple. Like a cuckoo, but sexier.

With apologies to Bryn, we were certainly rising up the social scale as we advanced into town. The houses got bigger and grander - we were sure we heard a horse whinny behind one of them - and soon we were in Ashton town centre itself.

I'm not sure how to put this, but there was a distinctly odd air to the town. Not a bad air: just something odd. Perhaps it was the lack of chain stores, the small shops, the little cafes, but it somehow felt like we'd stepped back in time to the 80s. There were a lot of pet shops - when did you last see one pet shop in a high street, never mind two or three? There was this place, which should win a prize for that pun: 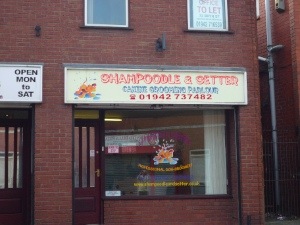 There were butchers and bakers, but sadly we'd missed the market. It was a type of town you didn't see any more. As Phil put it, "Ashton's very much its own ecosystem where you could spend your whole life without venturing even into St Helens or Wigan." 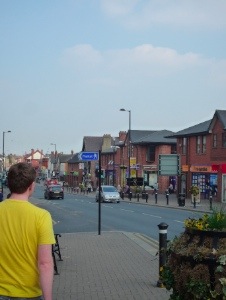 Apparently Ashton's also where Kym Marsh, a.k.a Michelle "Harpy" Connor from Coronation Street, grew up. She's just had a baby, so I won't be too impolite, but suffice to say she's not my favourite person.

All this tourism lark was terribly straining, so Robert and I did the only logical thing: 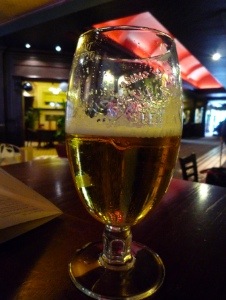 I had steak and chips and a lager in the Wetherspoon's while we watched the local characters. There was an elderly lady in a disability carriage who seemed to spend her whole time driving around, pausing at tables to give them the benefit of her wisdom, and not buying a drink. We snuch out before her and her velour twinset caught up with us. 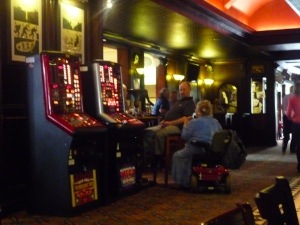 There wasn't much more to see, after that. Phil had suggested we check out the border between Greater Manchester and Merseyside, which was tempting, but we were bloated with alcohol and onion rings so we decided to waddle back to the station. 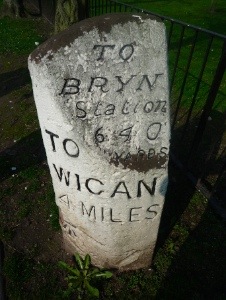 There was yet another reason to turn our noses up at Bryn station once we got there. Call me old-fashioned, but I'm not really keen on rodent traps on the platforms. It makes a bad impression. 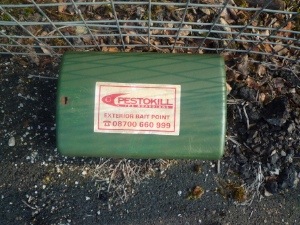 On the journey back, I did remember one of my favourite things about the City Line. It's a sign, just outside Broad Green station, and Robert managed to snap a pic of it: 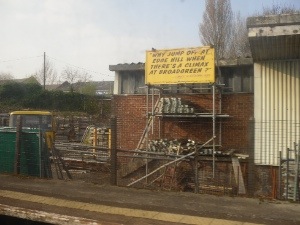 I love the phrase "jump off at Edge Hill" anyway (it's slang for coitus interruptus, Edge Hill being the last station before Lime Street) but this smutty, innuendo sign has always appealed to the Kenneth Williams in me. Bravo, builder's merchants; bravo.

THIS BLOG IS NOTHING BUT FILTH

Oh err, not in agreement with the above, Scott is doing a cool job, maybe thats the bloke that walked off in a huff (snigger).
Not sure where you can go next though, maybe the GMPTE map? cool blog as always :-)

In agreement with Andy on this one myself. The internet is a wonderful thing. Similar to television, radio, newspapers, books etc., if you see something you don't like it is quite simple to stop reading and go to another site. So my advice to you, Mr Anonymous, please kindly go sit on another website and see if they are interested in your Victor Meldrew-esque drivel. That is all. Thankyou kindly.

I think Anonymous was being funny. Let's be honest, if you didn't like filth in a blog, you wouldn't have read half the entries....

That sign is hilarious, I can't believe such things can be shown in public places!