Buses are rubbish, aren't they? You struggle on board, and buy your ticket from an apathetic Jabba the Hutt with a personal freshness problem. You scan for a seat, but they're filled by old women with harsh faces and beards who are using the bench next to them to store their shopping bag and would refuse to move it for the Virgin Mary.

So you struggle upstairs, which it turns out is occupied almost exclusively by fourteen year old criminals, smoking pot and throwing balls of wet paper at one another. You take a seat, and are hurled around while the bus driver swings in and out of traffic, apparently under the impression that he's in a remake of Live and Let Die. The trees hammer on the windows, occasionally breaking off and showering you with leaves and dew. The whole place stinks of wet anoraks and Lynx.

Your stop's coming up, and so you ring the bell, but you still have to struggle down an almost vertical staircase on a moving vehicle, so of course you stumble and break a toe. The bus driver slams on his brakes to let you off, because he resents having to stop at all as every pause means less time sat at the terminus reading his paper, and so you're chucked forward five feet to crash into the front windscreen. This causes all the old dears behind you to giggle into their pacamacs. Finally you can lurch off, tripping your way onto the pavement, and you get a face full of diesel as the bus charges away. Yes, buses are rubbish.

I accept however that there are plenty of people who like them. In fact, I have a couple of close friends who adore the things. I just can't get on board with them (hoho).

Buses were a big part of this weekend's Birkenhead Festival of Transport, held in Birkenhead Park. I'd never been to it previously - it was one of those things I'd meant to go to, and never did - but this year Robert texted me to say he was on his way there, and since it was taking place only half a mile from my home I decided to show up and take it all in. 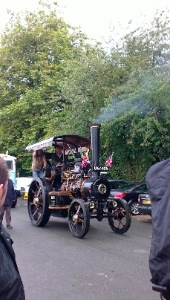 The weather wasn't on the Festival's side: it peed it down relentlessly all weekend. Half the attendees were wearing those plastic condoms they hand out at EuroDisney when there's a downpour, and the other half just looked miserable. I have an aversion to umbrellas, so I simply braved the weather. Luckily we were there in time for the Parade of Steam, in which various steam traction engines went past. Slowly. 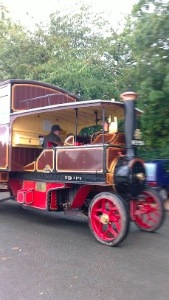 Can I be honest? Steam engines don't do it for me either. Yes, they're very pretty, but let's be honest, they're noisy and slow. We have electricity now. I don't get why people get so excited about steam engines (and by extension, steam trains) just because they belch out a bit of smoke.

The high point of the parade for me was a Llandudno tram, mounted on the back of a flat bed truck and bringing up the rear of the parade. Trams are good. In the hierarchy of means of transport, I'm very much Train>Tram>>>>Bus. 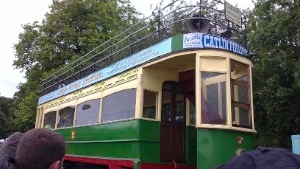 Beyond the parade, there were old motorcycles, old cars (including some very nice old MGs), and old fire engines and ambulances. The whole thing was staffed by very enthusiastic amateurs, people who clearly adored their vehicles, and spent hours buffing them furiously. It was a shame that the weather Gods hadn't given them glorious sunshine to display their efforts at their best. 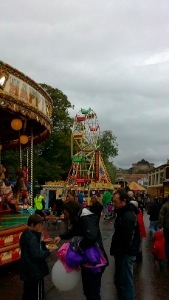 There were also loads of olde-time fairground rides - you know, for kids - and a bizarre mix of stalls. The usual festival/County Fair favourites of the RSPB, Red Cross and Sea Cadets were out in force, along with the Territorial Army and the RNLI, but there was also a strange mystic element. A caravan was home to a Romany woman offering palmistry, while a further tent offered crystals, tarot reading and, for some reason, chorizo sausages and fudge. Presumably, once you've had your future laid bare, you need some cured Italian meats to cheer you up. This was the tent that was supported by Merseytravel, apparently.

It turned out that Robert had never actually been to Birkenhead Park before, so I took great pleasure in showing him round. It really has been improved since they threw all that lottery money at it. When I first moved to the Wirral, twelve years ago, the park was a bit shambolic and tatty. Now the paths are clean, the bridges are painted and pretty, and there's just a general pride in the place which wasn't there before. We paused on one of the bridges to watch a model submarine being pulled along by model tugs. 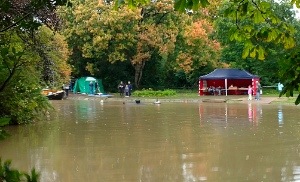 At that point the rain started to really come down, so we headed for the Visitor Centre for a latte (me) and a hot chocolate (Robert). Outside was a familiar-looking beak - Supenguin! 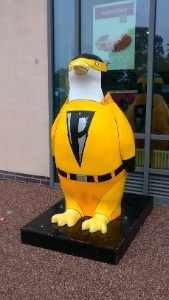 With hot drinks inside us, Robert finally persuaded me to join him on an old bus. He'd already taken one of the free "vintage" shuttles over from Liverpool, but had complained that it had only been retired in 2001 - I agree that a thirty year old bus hardly counts as vintage. Though it's depressing to think the vintage bus is younger than me. 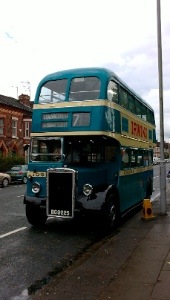 There were a couple of other buses being used to provide free rides to the Wirral Transport Museum and Hamilton Square. These were properly old, with Ovaltine advertisements and wooden floors and everything. I referred to the bus above as a "Routemaster", based on the fact that it had a little open platform at the back, and Robert slapped me down for my foolishness: it was some other kind of Leyland bus, built in Wigan apparently. Suitably chastened, I climbed on board for our ride round town, taking the front seats because that's where the cool kids always sit.

Look at his little face: he can barely contain his excitement. 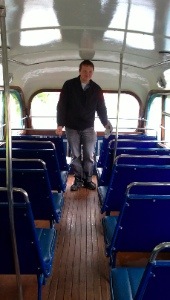 The bus was genuinely well-preserved, right down to the signage showing that anti-social behaviour on public transport isn't a new phenomenon: 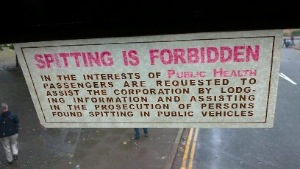 I like the way it encourages you to grass on people who gob in the aisle.

Off we went round Birkenhead's somewhat less scenic dock area. It's a shame that to get from the very pretty park area to the very pretty Hamilton Square you have to pass through an area of grim housing, vacant lots and ugly industrial units. Still, I did my best to provide Robert with a commentary on the area, since I've lived here for a third of my life now and I'm practically a local. "There's where the bagheads used to hang out when I worked in Smiths." "That's where the Woodside Hotel was before it burned down." "I was once flashed at there." I'm like a walking Lonely Planet, I tell you.

Did my journey on the antiquarian bus convert me to their delights? What do you think? 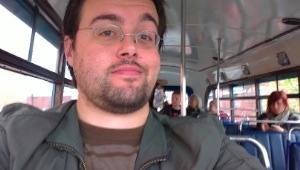 No. It was fine, relatively pleasant, but it was also noisy and a bit nerve-wracking (we squeezed through a gap at Hamilton Square that I'm sure was only meant for cyclists). The high point for me was passing through Birkenhead's genuinely lovely bus station. That's as far as my admiration for the buses will go: they sometimes have nice stations. Beyond that, I'll stick to trains, thankyou very much.

I love the description of bus travel in the opening paragraphs - scarily accurate!

I've just written up my account of the day over on my blog.

When you've finished SHAMELESSLY PLUGGING YOUR OWN MATERIAL, Hampo...

I can't agree with you, Scott - I'm an unashamed bus enthusiast but not to the point of it completely taking over one's life - which seems to have happened to some people when seen at these sort of events.

Whereas train-spotting (probably because of the film of the same name!) has gained, if not a quasi-social acceptence, a certain tolerance fuelled by the British love of the eccentricity of this sort of behaviour - bus spotting is still definitely billy-no-mates.

I have a very good friend whose living room is full of models of buses. Bus spotting isn't cool, but it's a passion, and I love people to have passions, whatever they are. I just don't get it. Mind you, I don't get football, either!