I love Lego. I know, as a 33 year old, I should be putting that in the past tense - I "loved" Lego - but, no, present tense all the way: I love Lego. It's the finest toy ever invented. It snagged me and my imagination at a very early age. It also represented the earliest manifestation of my God complex, where I would build towns then rain terror on their PUNY LIVES (see also: SimCity).

If you think that's bad, you should have seen me at eight or nine. My bedroom was a tribute to the joys of multicoloured bricks. I had an entire town set up across the floor, something for my mum to regularly kick to pieces by accident as she tried to tidy up.

Back then - I'm not sure if you still can - you could send off and join the Lego Club. Here's the ad: 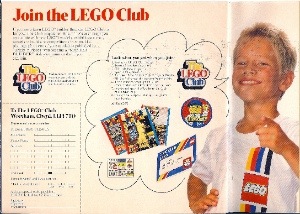 Next to the stereotypical gleaming, blonde haired Danish boy, you can see the goodies you got. A membership card! Stickers! A patch to sew on your jeans! A badge! And magazines!

This was too much for me to bear and, for my birthday, I bought a year's membership. I sent my postal order off to the address on the form: 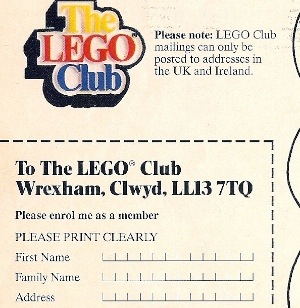 Glamorous, exciting Wrexham. Mysterious Wrexham. Capital of the UK Lego world: an address that appeared on all the catalogues and guides.

I was a kid, so I didn't know where Wrexham was. Apparently it was in Wales. So in my head, it was a pretty village, nestling amongst high purple mountains and glistening streams (it didn't help that the only book I'd read set in Wales was The Mountain of Adventure). Wrexham was clearly some kind of idyll, where happy, well turned out Welsh people lovingly crafted each piece of Lego. Possibly singing Men of Harlech as they did so.

Wrexham was Lego Central for me (even their postcode was LL for LEGOLAND!). I got older, and I grew out of Lego (sort of), but Wrexham retained that strange mystique, and a sheen of glitter. People spoke disparagingly about it, said it was a bit of a dump, a bit of a mess, but that didn't matter: it's where Lego came from.

I finally decided to go and visit the town itself, combining childhood curiosity with the glories of Tarting, and I brought a friend along for the ride. 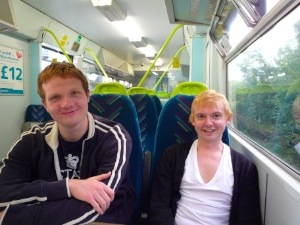 Oh yeah, Robert and Roy came too. They weren't the important travellers however. There was someone far more important in my pocket: 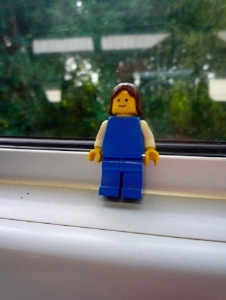 This was always my favourite minifigure, back when I was a child. Whenever I built a Lego town, she'd live in the best house: if I built an even better one, she'd be moved into that instead. Sometimes she had a husband with her, sometimes she was a free and single gal, but she always got the best. She had a name too, but I have to admit, I've forgotten it (it's been twenty odd years!). 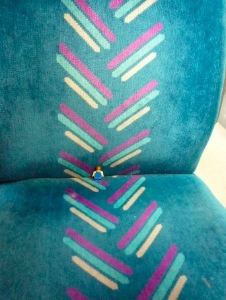 Roy and Robert were, to say the least, bemused by my companion. I don't think they realised they'd be taking this trip with a disturbed man-child. But stuff 'em: I was heading to Wrexham!

Wrexham Central station is a bit, well, perfunctory. It was never the jewel in the town's railway crown - that was General - but it had a couple of platforms, and a route through to Ellesmere. As time went on, though, services were cut back, diverted, or closed, until it ended up a stubby platform in the middle of deserted railway lands.

A few years ago, the lands were bought up for a retail park. At that time, only the Borderlands Line still called here, and since it also passed through Wrexham General en route, it was suggested they just get rid of it altogether. Thanks to the efforts of the local rail user group, they managed to get the station retained, albeit in a different spot, and it now lies at the heart of the shopping centre. They even managed to get it built with space for a second platform, if that became necessary at some point in time. 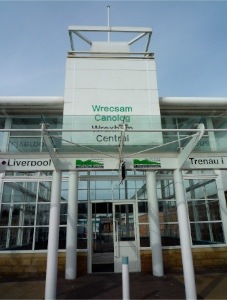 There's a very nice, gazebo like entrance to the station, but what's inside? Nothing. Not even a seat, never mind a ticket office. A single machine on the platform handles all the ticket sales. The building is therefore all pomp and no circumstance; a shame.

Still, both Lego Lady and I were happy to be there (that's her in my hand): 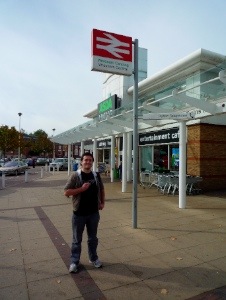 After that, we had a bit of a poke round the town. Disappointingly, the place was not constructed out of red and blue plastic bricks, and the locals didn't have bright yellow faces. Instead it looked like - well, it looked like any town, anywhere in the UK. The odd bit of Welsh on the road signs and the posters was the only clue as to your location. Beyond that it was the same dull mix of retail sheds, sixties pedestrianisation, and old people flats you got anywhere.

Lego pulled out of Wrexham in 1999, moving the production of the bricks to Eastern Europe. They also moved their HQ to Slough. How humiliating it must have been for the people of North Wales to find out that they were second choice to Slough.

In fact, it was all so ordinary, and dull, we decided we'd best go for a drink. 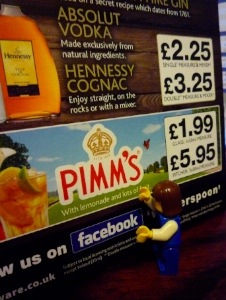 I declined Lego Lady's offer of Pimms, mainly because she was plastic and didn't have any money, and instead went with a pint of Ruddles. Lego Lady didn't seem to mind. 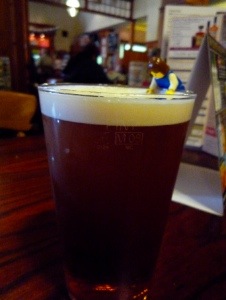 Robert, however, was still unconverted by her charms. 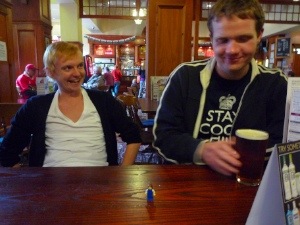 From the pub we tottered back to Wrexham General for the train out of town. It's actually a remarkably pretty station, with a slightly French air to it. Since the Wrexham and Shropshire Railway started running services to London from here it's had some money spent on it, with the brickwork cleaned and plenty of light flowing through it. In fact, it really puts Central to shame, which is ironic considering it's about a hundred years older. 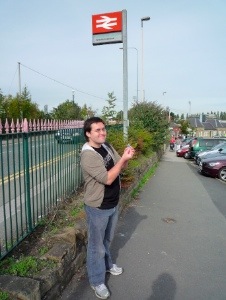 So that was Wrexham. I can't pretend I wasn't a bit disappointed by it. Not even the slightest hint of the Lego nirvana I had imagined. Still, my internal eight year old boy was thrilled. It was finally a dream come true.

Very nice. Will she be appearing in future tarting photos?

BTW, surely you've seen The Brick Testament, the Bible translated through the medium of lego?

I've never really explored the centre of Wrexham despite being well acquainted with Wrexham General station. Quite a few of my students have told me all sorts of stories about how awful Wrexham is as a town, but the few bits I've seen really don't look that bad. Whenever my schedule allows (that makes me sound pompous, but basically I mean when I can source a cheap ticket and get to WG to catch one of them), I book myself on a Wrexham and Shropshire train to get to London despite the ludicrously fast and easy connection from Chester. It makes no sense logically, but W&S have put some of the glamour back into train travel and their refurbished Mk3 coaches are fantastic. You can even catch the odd celeb; Pete Postlethwaite was a fellow passenger on my last trip!

Incidentally, that trip involved seeing a bit of the 'real' Wrexham as W&S had made the sensible decision to terminate the incoming train at Ruabon due to its being seriously behind schedule. The company didn't want to risk it sitting behind local services out of Wrexham General so put all of us waiting for the London train into taxis. We got to Ruabon in about 20 minutes and the train left on schedule arriving in Marylebone a few minutes early!

Kewl - I didn't see you take that foto of 'best house lady' next to the Wetherspoons menu... very good!

Oh - and 'theres someone far more important in my pocket'. You can't make it up!

If the public demands the return of Lego Lady, she'll be back!

Phil - there's a horrible snobbery in Chester about Wrexham being the pit of the earth, which is based mainly on local rivalry (try hanging around outside the Revolution in Foregate Street on a Friday night and tell me that Chester's all class). I know a few people from Buckley and Penyffordd and they say that Wrexham is a fantastic place - but they would, wouldn't they? It just struck me as singularly ordinary.

We saw a W&S train at Wrexham: half glossy silver livery, half 1980s InterCity. I sincerely hope you ended up in the silver end!

I went to visit my mate in Wrexham when she was studying there. The train pulled in to what looked like some sort of siding where it would be waiting for a while so I patiently sat for a few minutes. Then the train began reversing on its merry way back to Bidston. That siding was in fact Wrexham station, although there was no signage to say where we had arrived and certainly no announcement that we had arrived. I had to get off at the next station and meet my mate halfway between the two.

It's a tragic tale, worthy of being made into a film.

I love Lego Lady! I hope she was ok after consuming that much alcohol, for her tiny frame.

Never mind the station, you're standing in front of an 'ASDA Living'! Where on earth did that come from?! Tesco Homeplus best keep an eye out...

Lego Lady had to have a quite extensive lie down after her pint.

I honestly didn't notice Asda Living. I think my brain must have screened it out.

North East Wales seems to be a hotbed of ASDA Living stores. There's another one at the Broughton Shopping Park; I'd never even seen one before I moved to Saltney!

I also have a soft spot for Wrexham.
Even managed to get some of their bricks.

You were less than half a mile from the old lego factory when you were at the Central station.

It is now Wrexham Councils Housing Offices. There is a HUGE basement under the main factory which must have been where the lego was stored. It's such a shame the factory moved production to EE in the late 90's, sort of goes against the Lego theme of being a family business - the town really misses big/good employers as it on it's ass.

I had many family and friends who use to work at the site - and grew up with all the odd's and sod's that were left over (when a bag split during packaging etc.) - I think every kid in the town had loads of Lego, shame, as it's ssssssssssssooooooooooooo expensive now (even after they shipped out manufacturing to other countries for lower wages).

I found that people are always made welcome in Wrexham unless you're from Chester. Chester really is a dump with plastic people who try to keep up with the real cities like Liverpool and Manchester. Wrexham on a weekend night or rugby days has a fantastic atmosphere and a great selection of pubs. Sadly don't visit there to go shopping because most of the shops have now shut down.

Congratulations on making the pilgrimage!